Kutch and Kathiawar: A tryst with history, Part V 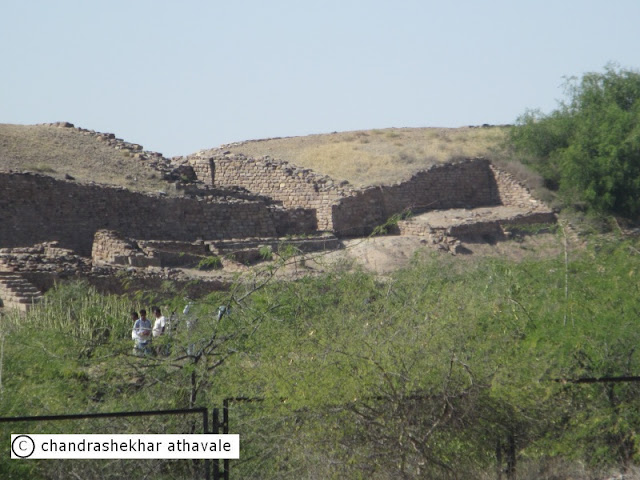 Right in the middle of the Rann of Kutch, there stands a huge island or a 'bet' with an area of about 313 Sq. Km. This island lies east of the 'Kalo Dungar' or Black hill coastline, which I visited on Thursday. The distance of Khadir 'bet' from this coastline is not much as the crow flies, and is just under 25 Km. However, no road exists between 'Kalo dunger' coastline to Khadir bet. The Government had planned sometime back, to build a bridge here. The plans were shot down outright by an expert committee, who thought construction of such a bridge would cause great damage to ecology of the Rann. 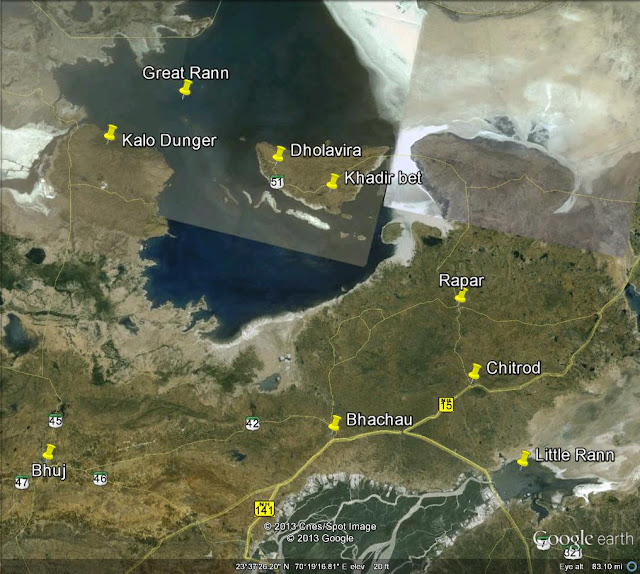 My destination for today is a small village on this 'Khadir bet' and since there is no shorter way, I would have to go round the Rann and enter this island from its eastern end, where a road exists and then cross the island itself as my destination village 'Dholavira' is located on western side of 'Khadir bet.' Considering the distance, I decide to leave early but finally manage to leave my hotel only by 7.45 AM. We take highway 42 to Bhachau. As soon as we get out of city limits of Bhuj, I can see on my right the 'Bhujangiya Dungar' or Hill of the serpent, along with the imposing fort on the top. The road is fairly in good condition except for large number of diversions because of the construction projects going on the road. The entire stretch up to Bhachau is now dotted with mega industrial projects that have come up by road sides. My driver informs me that all this development has taken place during last decade and this region was almost uninhabited before that. We reach town of Samakhiali by 10.15 and take National highway 15 to Chitrod. At this point we branch off on highway 51 to north going to Rapar. This excellent highway mostly goes through forest lands. Yet there are number of villages after Rapar town. The landscape remains essentially same. Arid lands with Gum Arabic shrubs, grasses, large number of cattle grazing. We pass by villages called Desalpar, Balasar and Lodrani. After this village, road turns west. After travelling a distance of about 8 Km from Lodrani, we come to lands end again. Ahead of me is a long bridge of approximately 8 Km length going through white Rann. 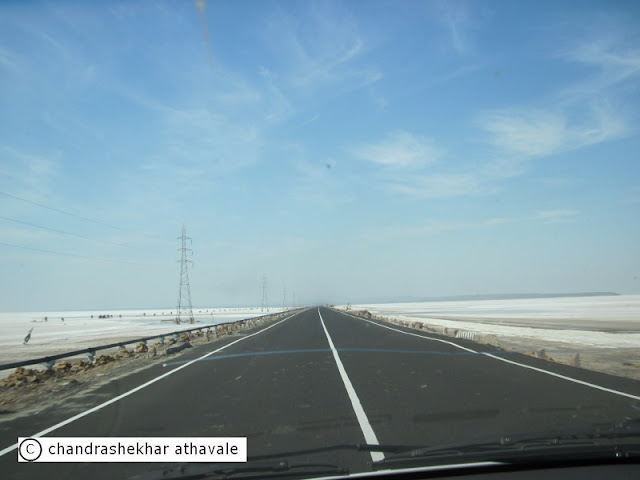 The view now changes to what can be aptly described as fantastic. On both sides of the road, I can see nothing but pristine whiteness of the Rann. There is nothing else. After a few minutes, I loose all sense of directions as only things that I see are the road ahead, vast whiteness on the sides and the blazing sun at zenith. The bridge finally ends and we are on the 'Khadir bet.' Unlike other 'bets' of the Rann, this island in inhabited with number of villages like Amarpur, Ganeshpur, Bambinika and finally Janan, which has a Border police check post. We move ahead. I can see ahead a nice parking lot for the vehicles and a building that has a name board that says 'Dholavira Archaeological Museum.' I look at the watch. It is 12.15 PM and we have arrived at Dholavira, thanks to the extremely good roads built by Gujarat Government. 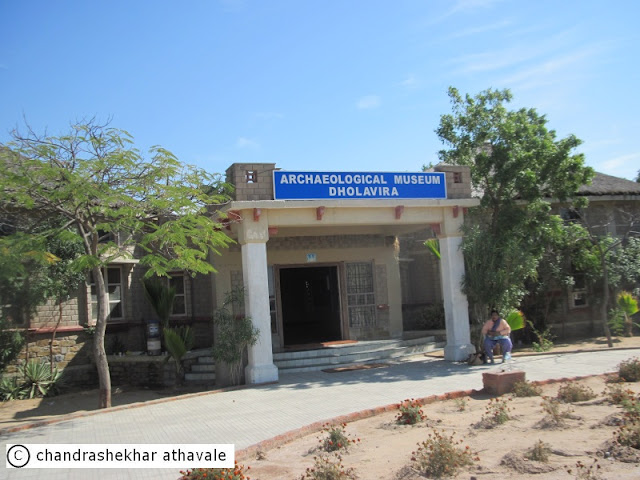 Many readers may be wondering as to why I have been so eager to visit this place in a remote and obscure corner of the country, far away from any of the big cities. There is a reason. This site was discovered first by Mr. Jagat Pati Joshi of the Archaeological Survey of India in 1967-68 and a series of 13 excavations were carried out here between 1990 to 2005 under leadership of Mr. R.S. Bisht, has made many beliefs and myths about pre-historic India, stand on their head and has brought to light a totally new scenario of those times. 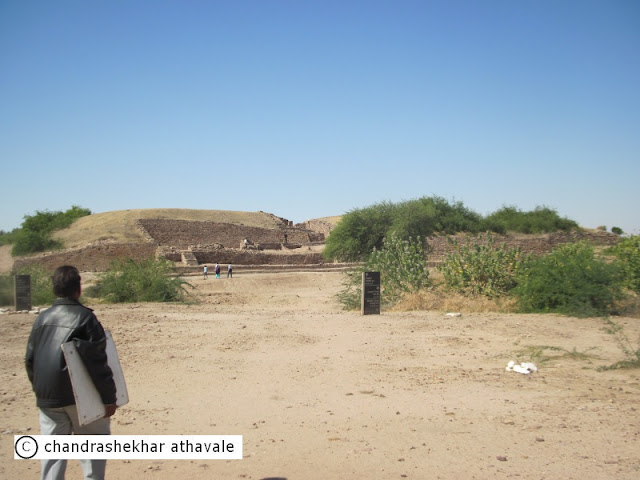 I consult with the staff at the museum and fix up help of a guide, Mr. Ravji Bhai to guide us during the tour of this ancient Metropolis in next couple of hours. 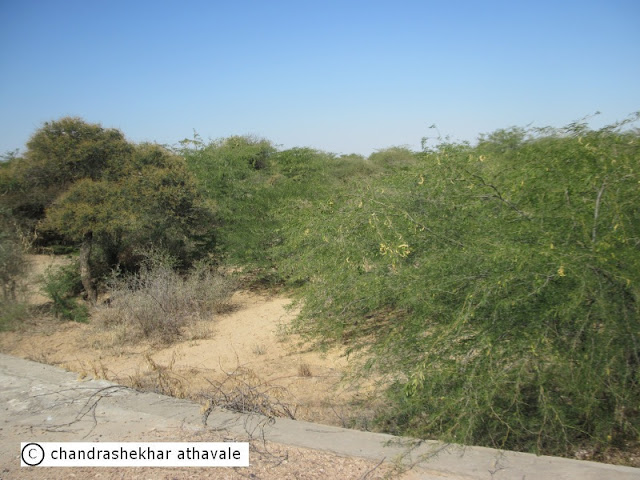 Along with him, I start walking towards a small hill feature opened up by excavations. Ahead of us is a narrow dried up rivulet named as 'Manhar.' I can see ruins of a dam built across this rivulet. Apparently there is one more rivulet similar to this in northwest corner of this metropolis named as 'Mansar.' The people of this ancient city had worked wonders with seasonal water flows of these two rivulets, so that they could quench the thirst and satisfy living requirements of water for 15000 to 20000 city inhabitants. 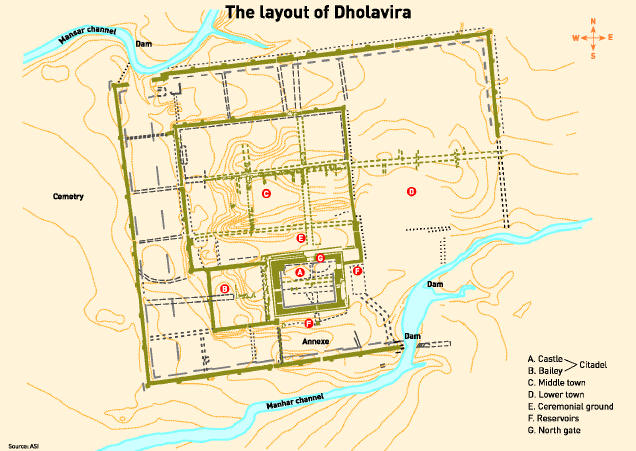 On the right, I can now see a vast underground water storage tank, with neatly built steps along one of the walls. This was the first tank in which water of Manhar channel would be taken first. Just ahead, we come across a wall about 11 to 13 meter thick. Confined within such four walls was the citadel or fort of the city. The walls are paved with stone bricks on both sides and filled with mud bricks and mud mortar. Mr. Ravji Bhai tells me that the height of this wall was increased at least 3 or 4 times during course of 1200 years (2600 BCE to 1400 BCE) in which this city functioned. The citadel had its own water supply system consisting of storage tanks and a well, whose water was drawn up by a bull operated rope and leather bucket system. The storage tanks are provided with a square shaped pit at the bottom to collect all mud and any other insoluble materials in water. This pit was cleaned at intervals. 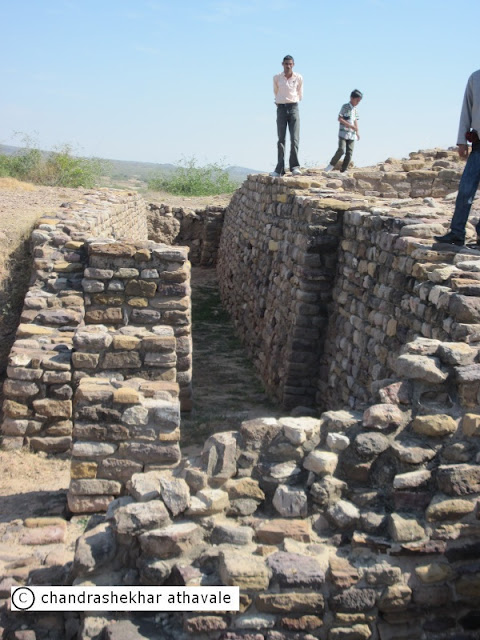 It did not rain much in Dholavira. Even then, these ancient people had perfect arrangements for water harvesting every drop of rain water. The rain water was collected through series of ducts even from citadel walls and stored. 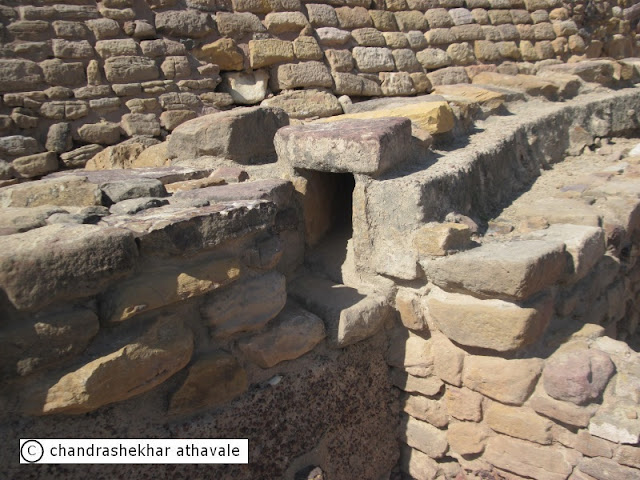 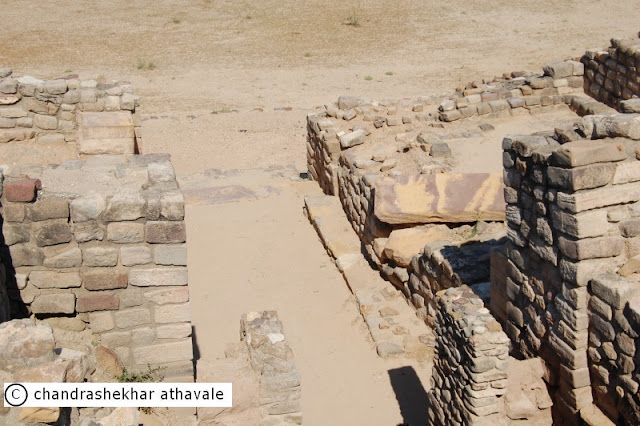 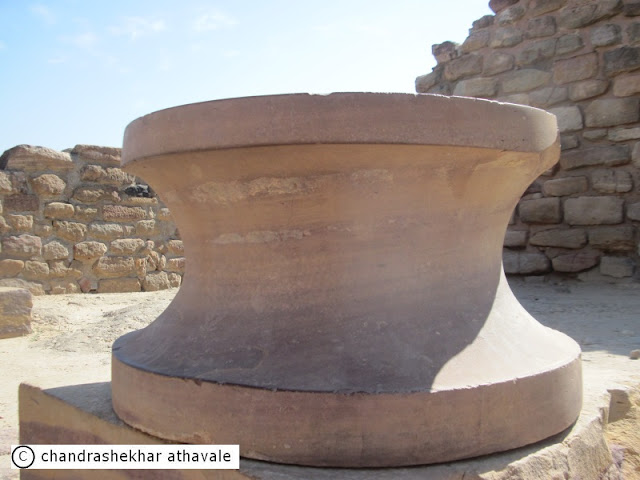 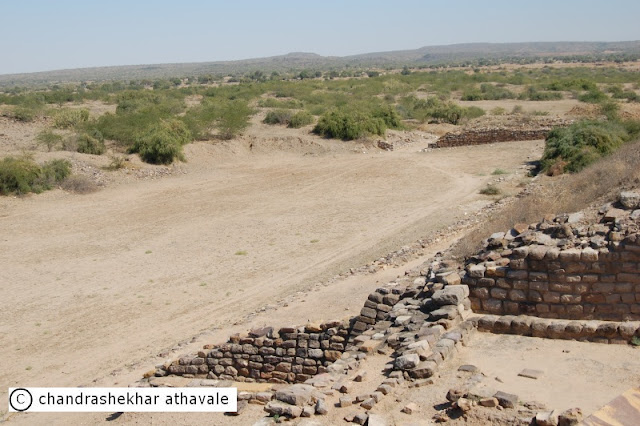 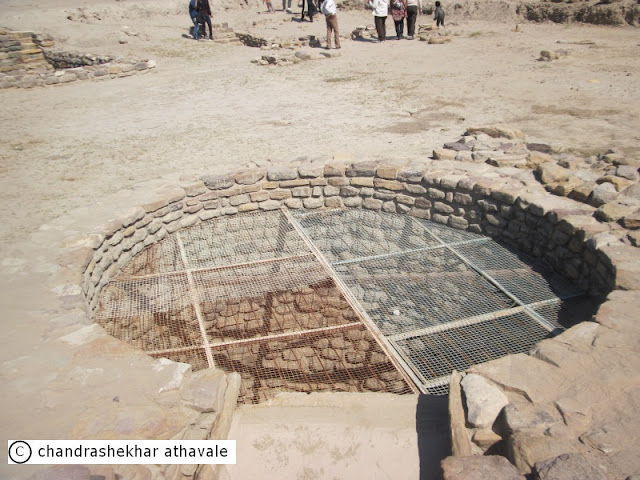 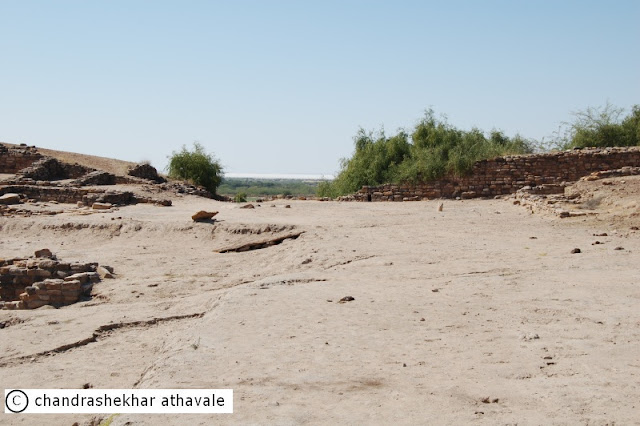 
Even more elaborate arrangements were made for the drainage of waste water. The rooms of the palaces had terracotta earthen pipes in a corner to drain off the waste water, which were connected to main drainage lines. These main drainage ducts were provided with air breathing holes at the top to avoid formation of air locks. The waste water was then let off in the sea ( Presently Rann) not far from the western end of the city. Beyond western fortification walls, were servant, quarters and grain storage tanks and more water storage tanks. The Citadel fortification walls on east, north and west had entry gates. Just near the door, chambers were built at a height with roofs supported on pillars, parts of which can be seen even today. The main through-way in the citadel was segregated in three sections, marked by means of 2 polished pillars. In one of the two north gate chambers, archaeologists found a huge name board written with 10 Indus script glyphs or symbols. Each of this was made from Gypsum and was 15 inches high. Total length of this board was about 3 meters and the gypsum symbols were embedded in wood, which had rotted away later, leaving only the symbols intact. Archaeologists believe that this sign board displayed the name of this place to outsiders. Beyond the north gate, there was a terraced stadium that could house 10000 people. It is believed to be the place for social and ceremonial events, festivals and Bazars. Mr. Ravji Bhai tells me that the staircases in the citadel have 7, 15 or 30 steps and archaeologist believe that these were used as a calender system to keep track of time. He also shows me a rock where fossils of sea shells can be clearly seen. 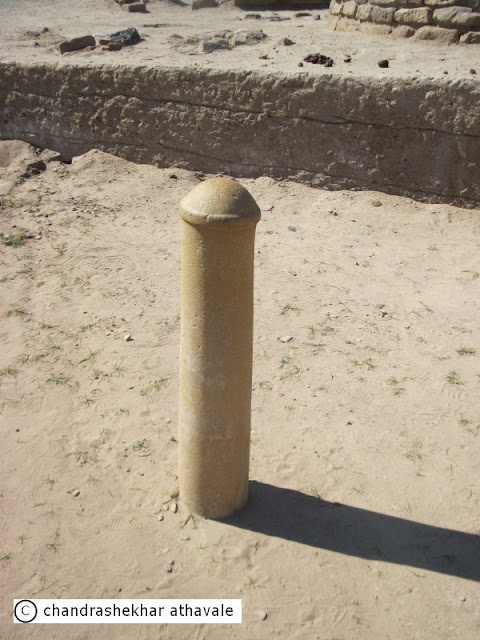 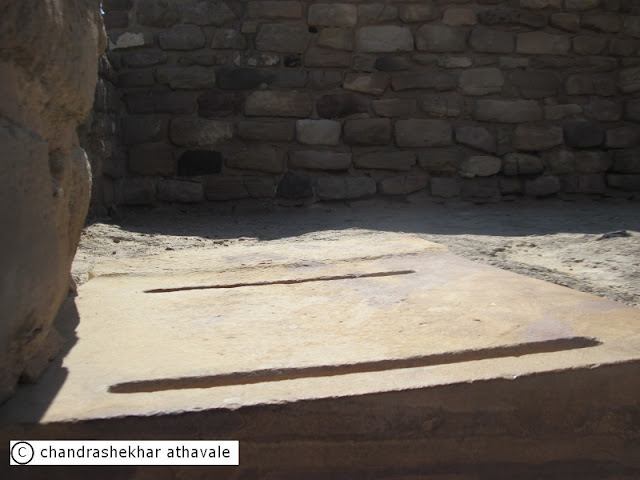 A slotted stone for pillar base

After finishing my visit of the citadel, I visit the adjoining museum. The museum has a collection of pottery, tools and clay models of some of the objects found by archaeologists and also a display gallery of photographs of objects found here. I manage to collect lots of information about this place and the way these people lived. 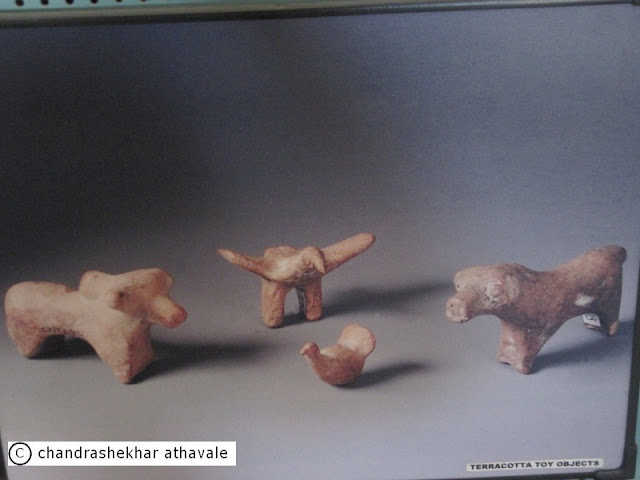 After a satisfying visit, we have our packed lunch and start on our return journey. Between Rapar and Chitrod towns, we see a 'Nilgai' (Boselaphus tragocamelus the largest Asian antelope, family Bovidae) crossing the road. We return to Samakhiali town, have cup of tea and instead of turning right towards Bhachau and Bhuj, push south on highway 27. My next destination is town of 'Morbi' or 'Morvi', where I might get a chance to visit the 'Little Rann of Kutch.' By dusk, we make it to this dusty town.