Kutch and Kathiawar: A tryst with history, Part IV 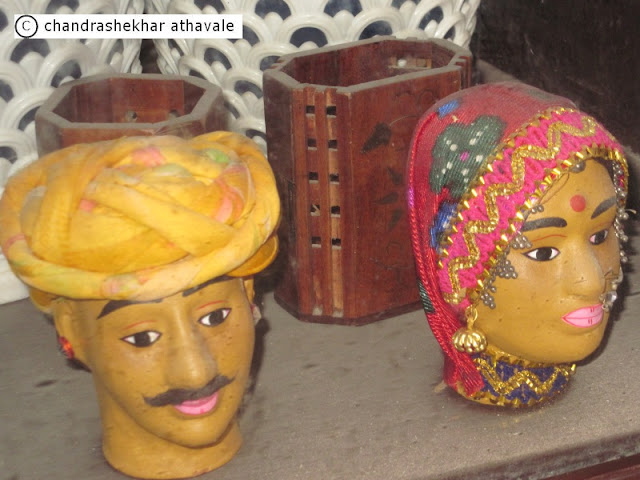 
I get ready early and after breakfast, say good bye to this wonderful camp in a desert in a far corner of India, where I have enjoyed superb hospitality and comfort for last 3 days. I am simply amazed at the efficiency and planning of the camp organizers, who have made this camp a grand success. Our Bus leaves for Bhuj and has a mandatory stop at Bhirandiyara again. This time, I get down and buy some 'Mawa', a tasty treat made from milk. I reach Bhuj around 11 AM and check in the hotel. I decide to spend the day seeing sights from this ancient city, which derives its name from Bhujiyo Dungar, (Serpant Hill) a 160 Meter high hill that overlooks the city, and is said to be the residence of the Great Serpent Bhujang, to whom a temple stands at the top of the hill.


From the 8th to 16th centuries, Kutch was ruled by the Samma Rajputs from Sindh, during what is considered to be Sindh's Golden Age. As the power center in Sindh declined, there were a series of complicated successions and intro-familial murders and intrigues, eventually leading to ascension of Lakho Jadeja, descended from the Samma Rajputs, to the throne as kings. From then on, the monarchy was known as the Jadeja Rajputs, who ruled directly from Kutch, not from Sindh. In 1549 Khengarji I moved the capital from Anjar to Bhuj, given its strategic location in the center of Kutch and Bhuj came into being.

During Mughal dominance followed by British Raj, Jadeja kings of Bhuj always managed to retain there independence to certain extent and this reflects into the individuality of this city. From the times of Lakhpatiji in eighteenth century, successive rulers of Bhuj, added many palaces in the city and did much for the beautification of the city. However a series of earth quakes happening on regular basis had been the biggest detriment for everything that has been built in Bhuj and palaces were no exceptions. The most disastrous Earthquake of them all happened on 16 June 1819, followed by other ones in 1844-45 and 1864. Next big one struck in 2001. These earthquakes have flattened or extensively damaged most of the old buildings in Kutch. 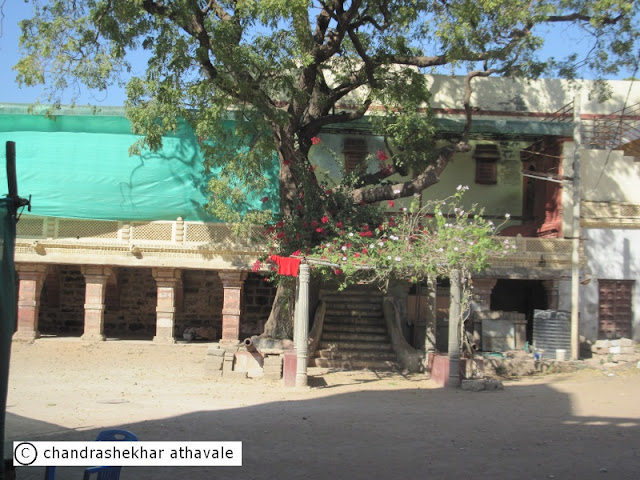 For a tourist, Bhuj is an an ideal place, because most of the places worth seeing are located all around a central lake called Hamisar lake. Only last year, this lake had overflown and I was expecting it to hold reasonable amount of water. So, after having for my lunch of so called “Kutchi Pao-Bhaji,” I decide to start my Bhuj sight seeing, with a visit to Aina Mahal (hall of Mirors) located on one of the banks of the lake. I hire a 3 wheeler, an extremely noisy and uncomfortable type of transport and reach the Aina mahal. It is well described in most travel guides and I quote:

“Aina Mahal Palace was built by Rao Lakhpatji in 1750 AD. Aina Mahal is a part of a large palace complex. It is a two storey building with Darbar Hall, hall of mirrors, and suites for royal family. In the 18th century, the Rao Lakhpatji sent a local craftsman Ramsingh Malam to Europe to perfect his skills in glassmaking, enamelling, tile making and iron founding. After he returned back, he constructed the Aina Mahal with the hall of mirrors of Venetian glass. The Hall of mirror has white marble walls which are covered with mirrors and gilded ornaments and the floor is lined with tiles. The design and decoration of the Aina Mahal was due to the efficiency of Ramsingh Malam. The platform above the floor is surrounded by a series of fountains operated by an elaborated system of pumps below a Venetian chandelier. Aina Mahal is a unique example of an Indian palace built in the mid-eighteenth century with European influence.” 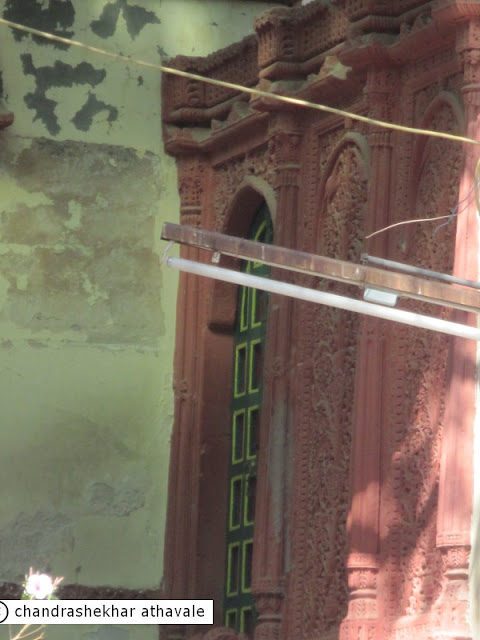 Bass relief carvings on the exterior walls of Aina mahal

Unfortunately, great disappointment awaits me. Being a Government holiday on account of Eid, the palace is closed for visitors. I have to remain satisfied with few photographs of the exterior, which is not very inspiring. 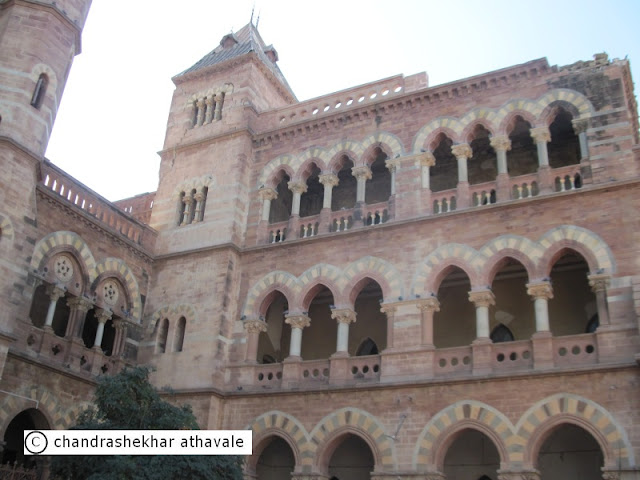 The palace next door is known as Prag Mahal. It was constructed by Rao Pragmalji II (1838-76 AD) and was designed by a famous British architect, Colonel Henry Saint Wilkins, who also had designed many buildings from my home town Pune, like Deccan College, Sasoon Hospital, Ohel David Synagogue. It seems that Prag Mahal took about 10 years to get built at the cost of 20 lakh Rupees. May be, because of my familiarity with similar buildings in Pune, and in particular to the Main building of University of Mumbai with its clock tower, I am not much impressed with this building. Even the cornices or ledges on top of pillars look similar. Fortunately for me, the palace is open for visitors. I buy an entry ticket and move in. 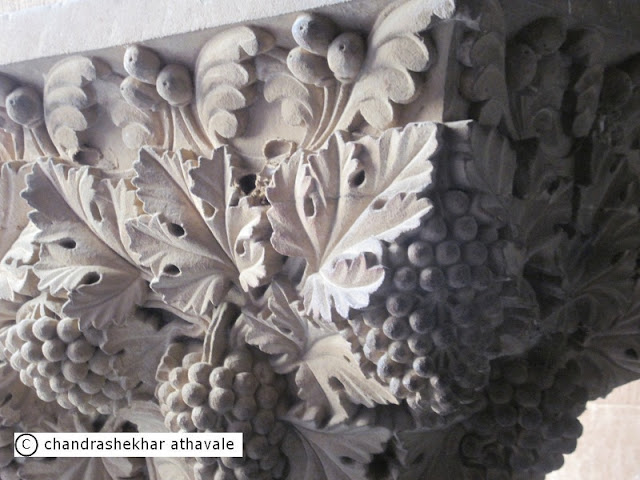 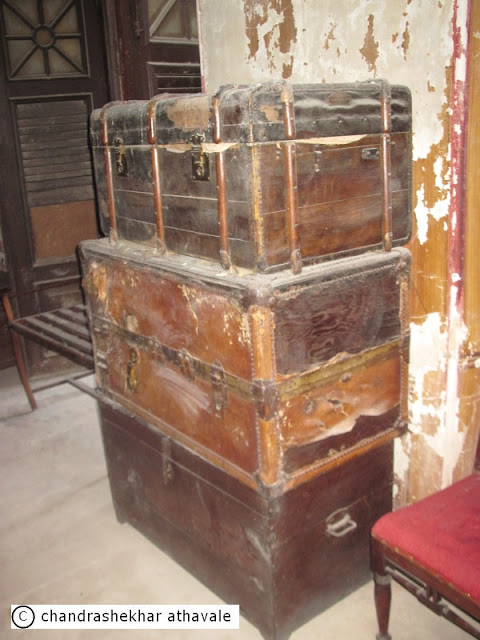 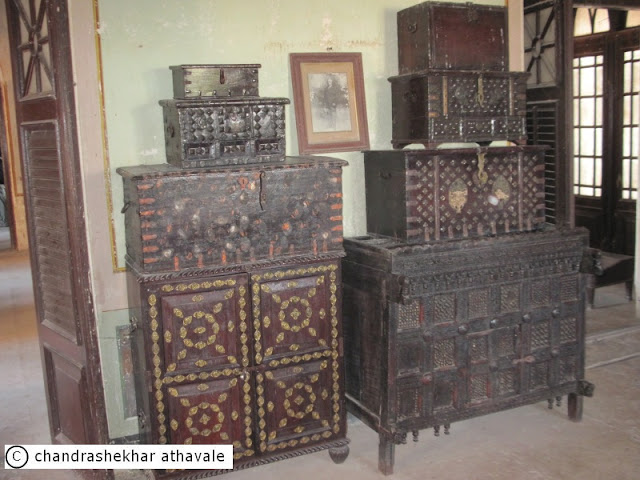 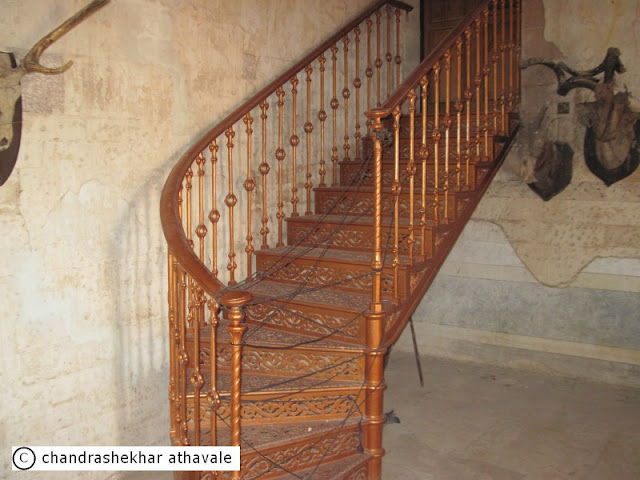 It is a typical palace museum for a small time ruler of a princely state. Usual things like carpets, period furniture, darbar (court) hall, paintings, utensils, hunting trophies, guns, toys for the young once and so on. In one corner I found a series of reprints of paitings done by one of the great Indian painter of that period, Raja Ravivarma. Someone had added semiprecious jewels on the reprints making them unique and worth while to see. From the terrace of the palace I can view the Hamisar lake. Unfortunately, there is almost no water in the lake because of the scanty rainfall this year. A major water tank near the palace known as 'Ramkund' also is dry and empty. A solitary, wheeled gun is seen next to the front porch of this palace, perhaps the only mute witness to all the damge done by the earthquakes. 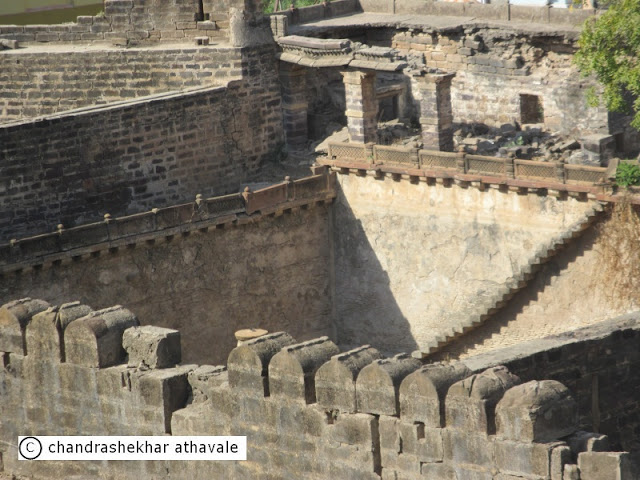 Opposite Prag Mahal, there is another but much dilapidated palace known as 'Rani Mahal' (Queens palace). Series of earth quakes have taken their toll on this palace and today it is not safe even for entry. It has some nice architectural features such as windows with beautiful lattice workmanship, balconies and door frames. I spend few minutes admiring the Rani Mahal. My next stop is 'Kutch Museum,' which is supposed to have been founded by Maharao Khengarji III in 1877 AD. The museum has a large collection of Kshatrapa inscriptions, various archaeological objects, arms and specimens of various crafts of the Kutch region. Bad luck keeps following me, as I find the doors closed because of the holidays. 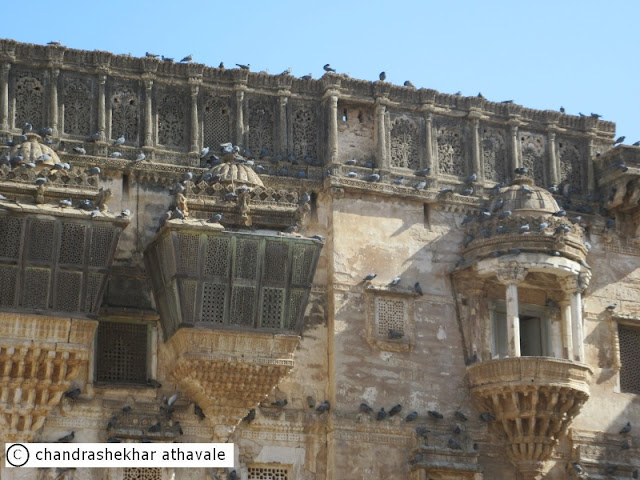 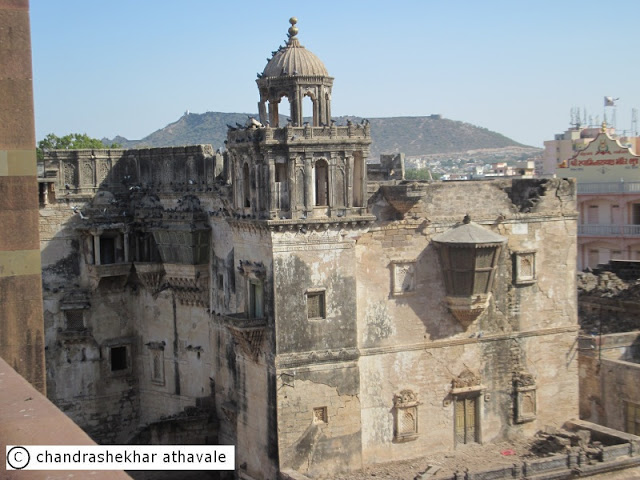 Since I have time on hand, I visit Swaminarayan temple, a huge glitzy kind of set up, constructed fully with white marble and hundreds of full relief sculptures on pillars and walls. The sculptures look like printed pictures with the lips of figures painted red and with a mandatory vermillion coloured dot on the foreheads. The temple has a huge following of disciples, and there is a great crowd of devotees. I move on next to 'Chhatardi,' which is supposed to be a memorial for past kings of Kutch. These memorials have been so much destroyed by the earth quakes, that they have built a stone wall around them. I can only have a look from a distance and manage to take some photographs. 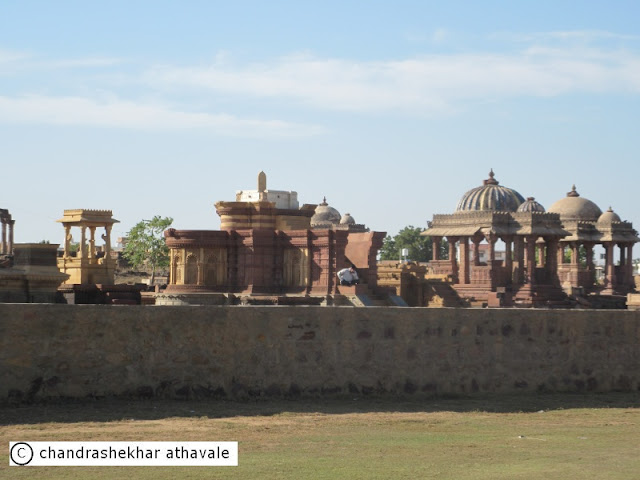 Before returning to my hotel, I loiter around the main market and indulge in little bit of shopping. Later, after having a sumptuous dinner, I go to sleep early as I have to leave tomorrow morning for a destination, 250 Km away from Bhuj. The place, I am planning to visit, was a thriving and prosperous metropolis of 20,000 people, about 5000 years ago.