Kutch and Kathiawar: A tryst with history, Part III

We have been told that the buses shall be leaving from the main gate, from 8 in the morning for a journey across the Rann. I get up early, have my breakfast and report at the main gate sharply at eight o' clock and find that the first bus is almost full. We leave the camp in next couple of minutes. Our guide for the journey is an ex-armed forces man and is quite witty. We again cross the same road to Bhirandiyara and then turn left on highway 45 to north. The landscape remains essentially same, patches of Banni grasslands with herds of healthy looking cattle, interspersed with fields growing 'Erandi' crops. We stop at a town called 'Khavda'. It is the last major town before vast wilderness of the Rann to have a cup of tea. 'Khavda town has its own handicrafts specialty. They make leather article here like footwear and purses for women. I notice that many people from the town, look strikingly different and dress differently than their brethren from other nearby villages towards south. These people have longish faces with sharp noses and wear turbans and loose fitting clothes with a scarf, very similar to clothes worn by people from northwest. My guide tells me that these people have migrated here from northwest, many decades before, and have made this town their home. An effort is now being made by the Government, to assimilate these people with Kutch populations. 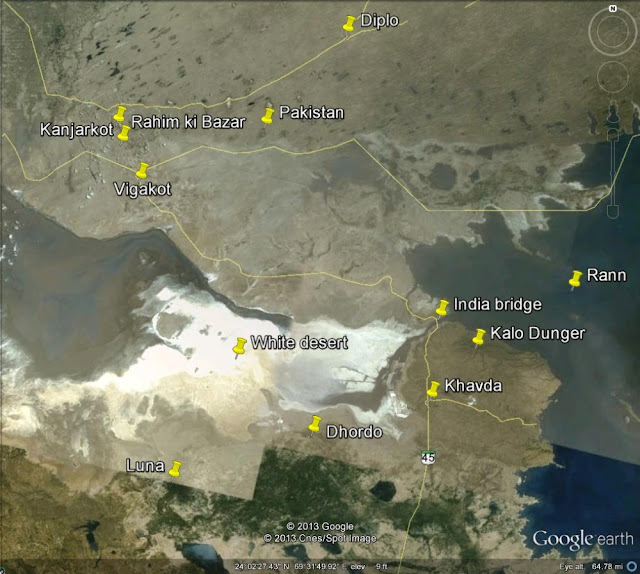 We continue our journey. Soon we pass another village named as 'Kuran.' Landscape is now slowly changing. I can not see the 'Erandi' fields around any longer. Vast stretches of wasteland can be seen with Gum Arabic trees and dried grasses. Soon we come to land's end. On both sides of the road, I can now see stretches of the Rann, barren, dry, brownish gray and without vegetation of any kind. In spite of being so inhospitable, I can still feel it's charm. On my left or towards east horizon, I can spot the vast stretches of the white desert or the salt flats. On right, beyond the barren brown coloured dry land and almost near the horizon, the Rann acquires a bluish, grayish hue which almost deceives the onlooker, who may assume it to be a part of a vast sea. Looking at the landscape, I find it impossible to believe that this barren and inhospitable world was once a most fertile agricultural land, with abundance of sweet water and a major civilization had prospered here.

Like deep water sea islands, the Rann also has number of islands or 'Bets,' which are surrounded by sea water during Monsoonbut are accessible even by land routes during rest of the year. Ever since historic periods, number of tracks have been known and available for the local people to cross the Rann during summer months. Rann has been the boundary between Princely ruled state of Kutch and British province of Sind, during British raj days. One of the tracks linked Luna town in Kutch with 'Rahim-ki Bazar' (in Pakistan now) passing through Vigokot and Kanjarkot (now called as Islamkot) Two more tracks linked Nagarparkar (in Pakistan now) starting from Bela and Lodrani. The fourth track ran from town of Khavda to Diplo (now in Pakistan) passing over 'Mori bet.' However, no one uses these tracks now and an all weather road, built by army engineers is available for travel from Khavda to cross the Rann. 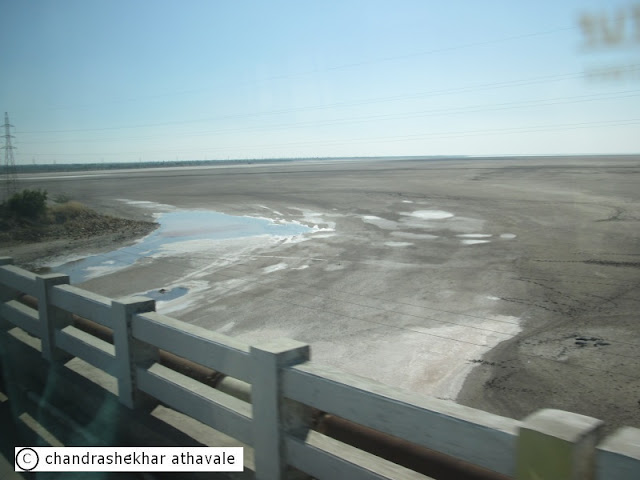 A Bridge known as “India Bridge” needs to be crossed from Kutch to enter the Rann. Our bus crosses this bridge and we arrive at an border check post known as 'Dharmashala.' From here the security is very tight being the border area with Pakistan. The bus stops at the border check post. We all are asked to surrender our mobile phones, cameras and any other electronic stuff we may have. Even Sim cards used in phones are not allowed. Our bus is checked by a dog trained for the purpose and also by security personnel. We get a green light and proceed with our journey on a 'bet' known as 'Kuar bet. This place in totally uninhabited except for the border police on duty. The landscape is dotted with rocky land, police posts and bunkers, shrubs and grass lands with ripened yellowish grasses. We soon traverse across the 'bet' and cross over to another one, after passing over a short bridge. This 'bet' is called as 'Chiriyamore' (Birds and Peacocks) island by police personnel. We stop at another army post , where the bus driver has to sign a register. Our guide draws my attention to the right. There is a 'Chinkara' or Indian gazelle, (Gazella bennettii) standing in the grasses. This is an endangered specie and very few exist now. They have found the Rann as a safe heaven for obvious reasons. 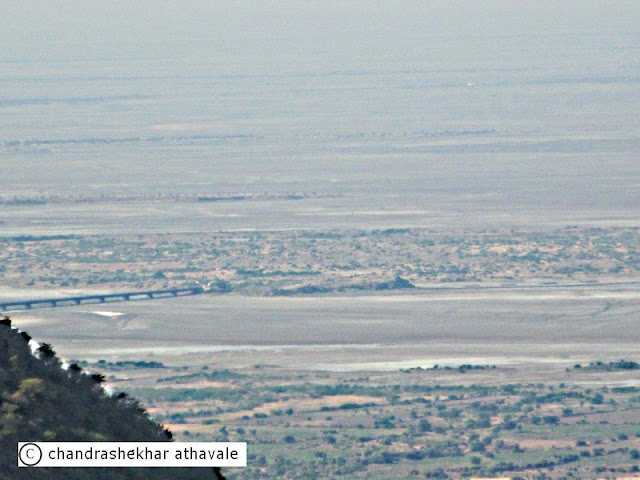 The bus now crosses into real Rann area. The road has been raised at least 3 to 4 feet above the ground surface and the sides have been paved with stone bricks set in concrete. The road istself is asphalted. It is so narrow that after every 100 meters or so a shoulder has been provided so that two vehicles may crosss each other. The Rann surface is still somewhat moist, with puddles of water in few places. The road through the Rann, continues for about or 4 Km before we land on another 'bet' designated as 'BOPS bet'. The landscape again gets green again with throny scrubs and grasses with straight stems radiating from a common ground base perhaps of Cenchrus species. We see more and more Chinkaras or Indian Gazelles on way. After the 'bet,' we again hit on a stretch of road, about 10 or 12 Km, going straight across the Rann. There is really nothing to see, except barren flats. On my left, patches of white desert dazzle in the afternoon sun and on northern horizon, small patches of vegetation appear and disappear. Marks can be seen in the dry flats of the Rann, of a number of small and completely dried rivulets, making zig zag patterns. We continue for another 30 or 40 Km. Far towards the north, I can see high ground again with few modern buildings. These buildings, called as 'Vigokot guest house,' signal that we have crossed the Rann. Geographically speaking, we are in Sind now.

Vigokot is an old fort, and ruins can be still seen. A local landlord ruled from here till 1819 earthquake, but his fort and all the villages under his rule were completely destroyed along with drying up of a river, which was the only source of fresh water.

Some more formalities and checks. Finally we get all clearances and the bus moves and parks near a barbed wire fence. I get down and look through the fence. I have reached the border of India. On the other side, about 150 meters from the fence is the country of Pakistan. The international boundary, about 150 meters from the fence is marked with white coloured pillars, 4-1/2 feet high placed at every 40 meters. On Pakistan side, there is no fence at all. It is but natural, because, they have no fear of any encroachments from India. The Border policeman, who accompanies our bus, answers all our queries. He shows us the observation towers placed by Pakistan. I am thrilled by the idea that someone from Pakistan is, at this very moment, observing our bus and a motley crowd of Indians and perhaps wondering, what the hell are we doing on the border. In our bus, there are people who have come from all corners of India, yet at this moment, on India's border, everyone is same; an Indian.

About 5 Km north of this place are ruins of another fort called as Kanjarkot. This fort and villages around it were ruled by the brother of the landlord of Vigokot till 1819 and were similarly and totally destroyed. Further north is the town of 'Rahim ki Bazar.' Historically, Kutch rulers always had their jurisdiction up to this town. After Pakistan was formed, it started objecting to this and claimed that this area was part of Sind, now a dominion under it.

We are told that at this very place, military action had taken place in 1965, when Pakistani's had attacked and had killed about six of Indian CRPF policemen. After the cease fire, an international tribunal was set up to mark the boundary. According to it's award, Kanjarkot was given to Pakistan and Vigokot to India. But that was another day. Border is now all peaceful. We return to the guest house and enjoy our lunch arranged for us. I again have a peep at Pakistan through my Binoculars from the terrace of the guest house. From this height, I can see that there is a small ridge spread in the westerly direction along the Pak border. I ask a policeman about the ridge and he agrees that indeed there is a ridge. I wonder if the ridge is part of the 'Allah Bund,' formed during great earth quake of 1819. Most probably it is just some high ground.

After lunch, we start our return journey to Khavda. Another long afternoon in the blazing sun. Driver turns on the air conditioner and every one dozes off. It is almost 4 in the evening, when we reach Khavda again. The visit to the Rann is over. I react with little suspicion, when our guide announce that we would be now going to another place known as “Kalo Dunger,” or Black hill. The bus moves eastwards and we come across a hilly region. The bus starts climbing the valleys and troughs that have rock surfaces, which only sheared only in flat plate forms. It looks as if someone has stacked a heap of rock plates on top of each other in the valleys. Soon we reach the top. There is an Hindu temple at the top but I push on towards the highest peak, where an observation platform has been created. 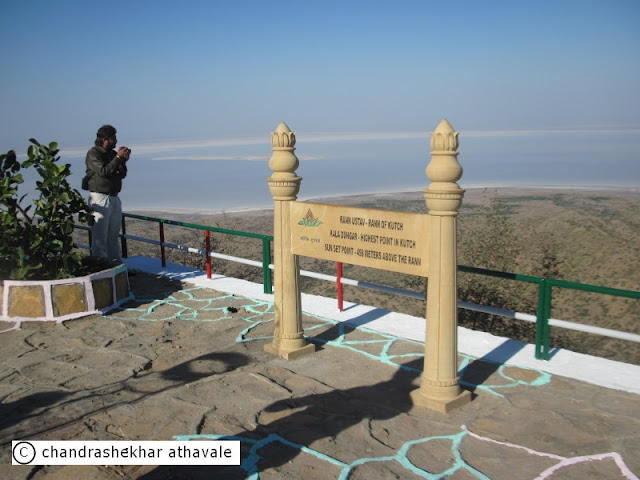 The observation platform offers most breathtaking views of the Rann. On my left are the salt pans and behind them the vast stretches of white desert.


On the right of that, is the India bridge, linking Kutch with Rann islands and Sind in Pakistan. And to the right is the Rann, looking bluish gray. The edges have turned white with salt deposits. The Rann looks from here, just like a gulf, full of water and with frothing waves hammering the shores. A total deception. 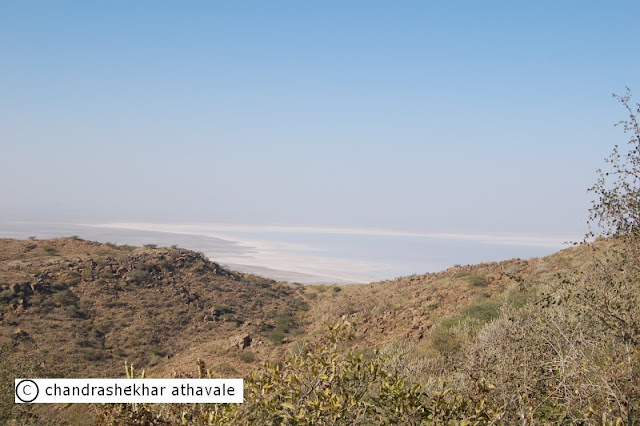 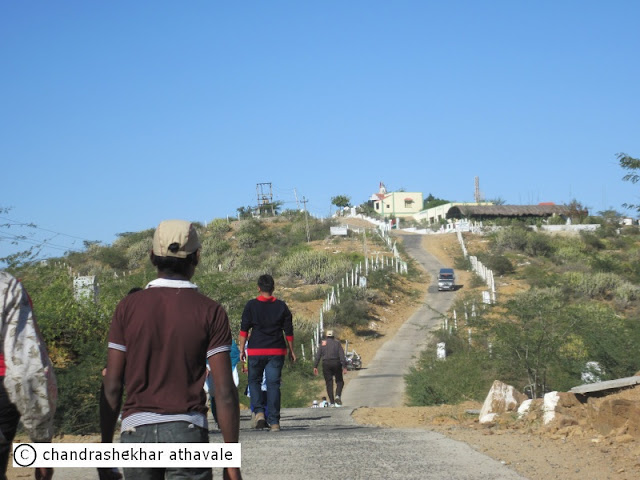 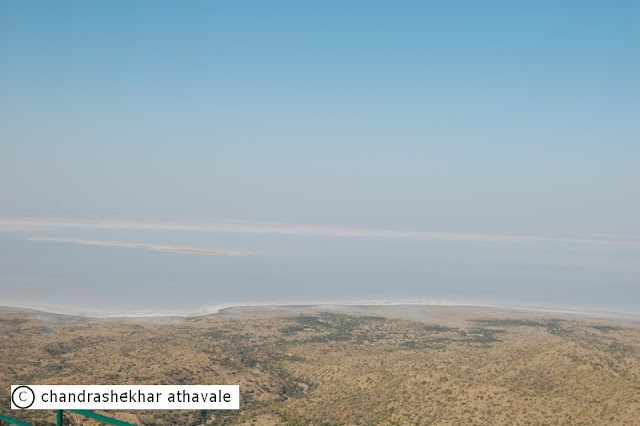 Later, I return to the camp and have my dinner and watch another well orchestrated dance programme. As I hit the bed, I find it impossible to sleep for a long time with images of the Rann and the border flashing through my mind.