Kutch and Kathiawar: A tryst with history, Part II 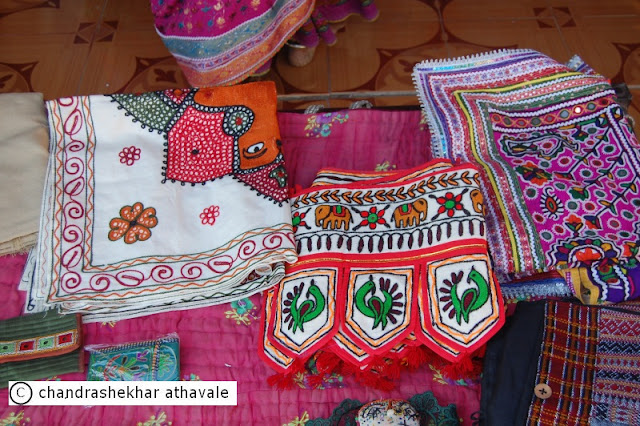 A large fleet of buses has been contracted by the organizers to facilitate transport of camp inhabitants and are available just outside the main gate. I board a bus and within next few minutes, there are enough people in the bus and we leave again on the same single lane road on which we had travelled to arrive at the camp. The bus joins highway 45 at 'Bhirandiyarni' but turns left to go in northerly direction. 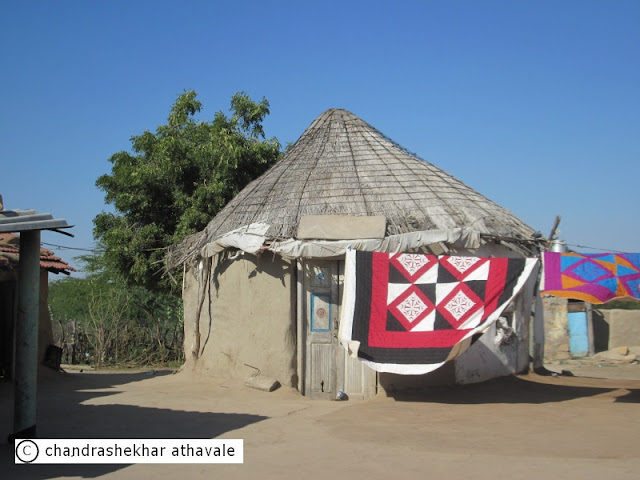 The weather has turned very hot now with afternoon sun blazing and scorching us. Soon, we arrive at a cluster of round shaped huts or 'Bhungas'. 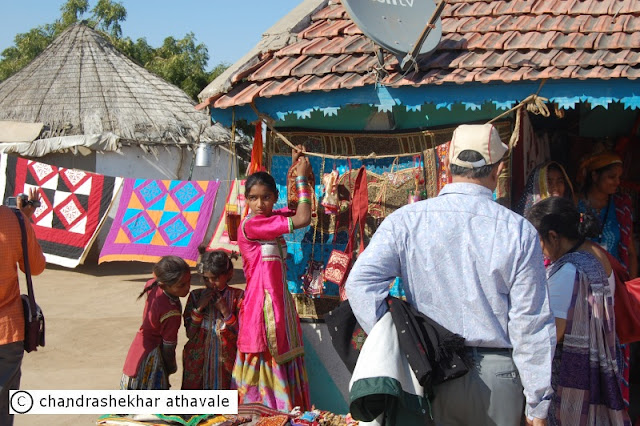 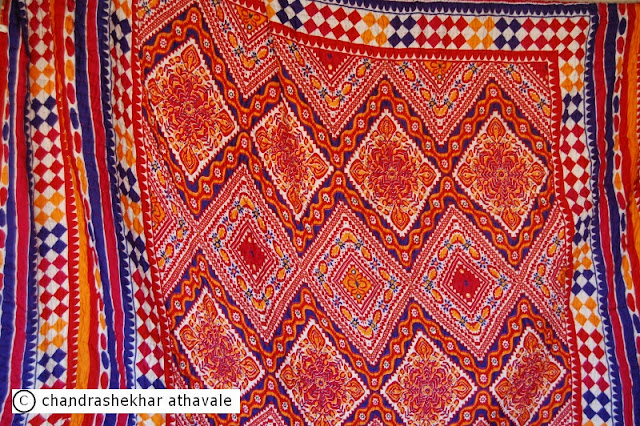 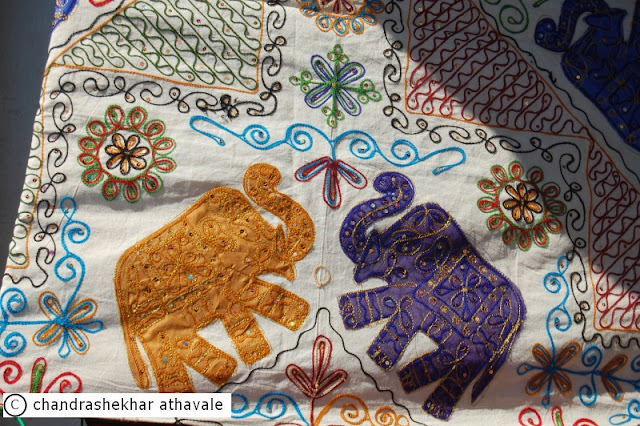 I get down and it becomes clear to me with just one glance, that this is not the real village of 'Bhirandiyarni,' which probably is located further up on the road. This is an exhibition cum sales counter of Kutch handicrafts. Yet, I have no complaints, as what I can see in these huts is, to put in mild words, simply breathtaking. I have never seen previously, such riot of colours and brilliant designs, woven on garments or on bed sheets. There are animals, birds, geometrical patterns, embroidered with a special stitch known as Kutch stitch. Small mirror are fixed on the garments with stitches woven all around them, which makes the garments shine, glitter and dazzle in the blazing sun. The villagers, selling the stuff, are all dressed with brightly coloured garments and headgear. The colours are rich, dark and bright, yet do not appear to be garish and gaudy at all. It is a feast for the eyes. This village visit is a sales gimmick no doubt, but a delightful one. 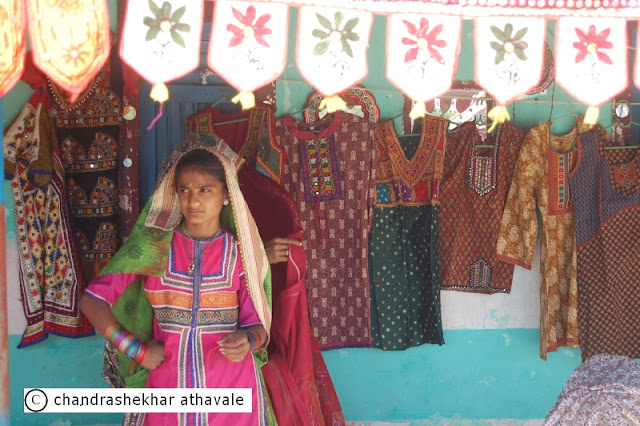 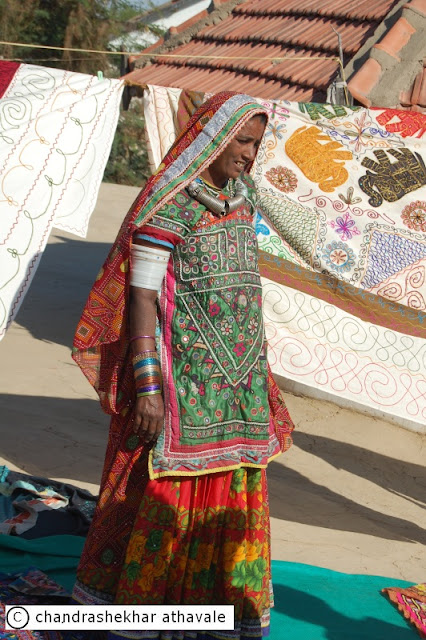 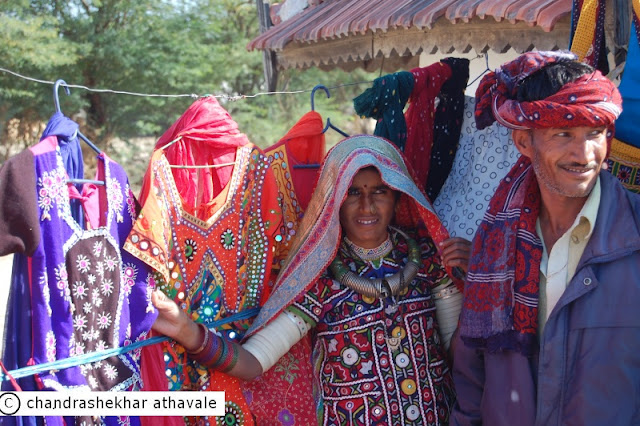 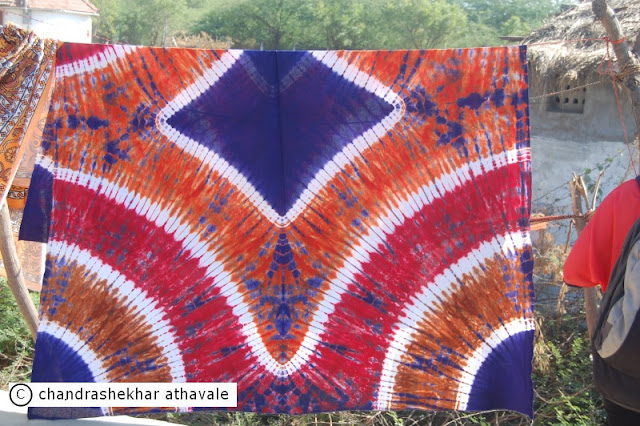 I see a strange contraption in one of the huts. It is a small cupboard coated with mud, painted white and with a small door in the front. Above the cupboard, six earthen pots have been kept in two columns of 3 pots. The entire contraption decorated with small mirrors embedded in clay. This is the tribal refrigerator, The earthen pots are filled with water and eatables like milk and other food are kept in the small opening at the center provided with the door. In the hot conditions of summer, when temperatures often touch 50 degrees Celsius, this indigenous refrigerator is very useful. 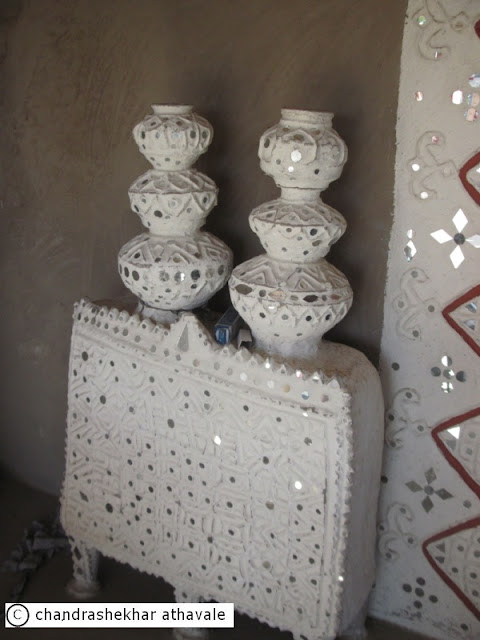 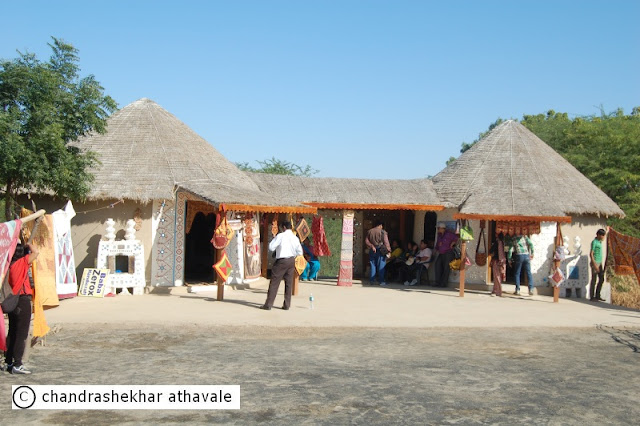 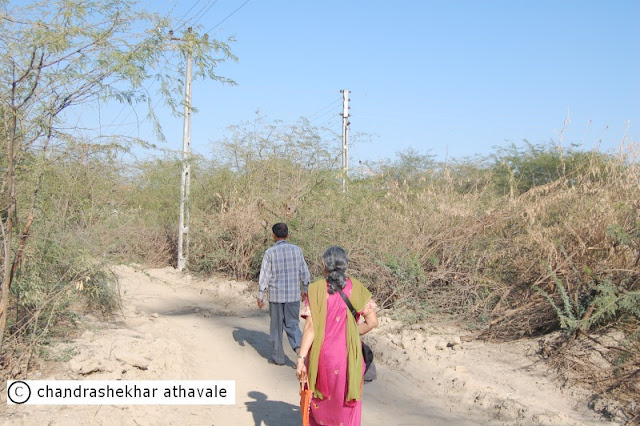 We move on to the next village called 'Hodko.' Slightly away from the village proper, a model village has been set up for visitors.The final bit of dusty road to this village goes through a Banni or grassland with dense Gum Arabic shrubs clustered around. This model village is more like a bollywood filmy set with all dwellings, spic and span, with polished doors and well decorated with artful drawings on the walls. 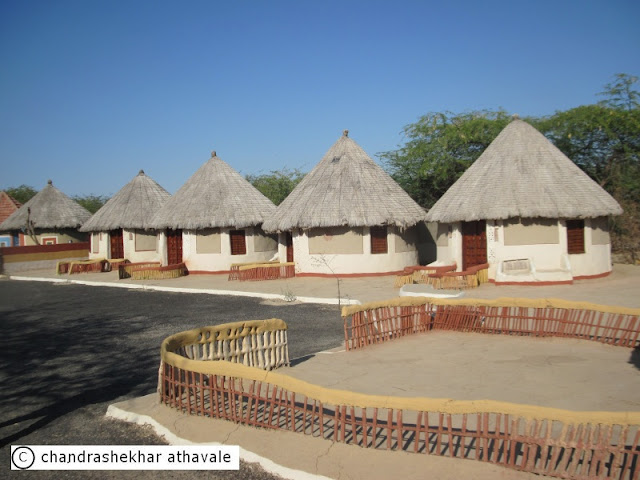 Yet this is not a film set. People actually live in these huts. I see some lovable kids playing around the huts. I peep inside a hut. It is all neat and clean with household things arranged on shelves fixed on walls. There are some beautiful samples of Kutch mirror work in which small mirrors are embedded on white clay coated flat panels. The designs are mostly geometrical and these panels are usually fixed on the walls. There are lots of curios and other artifacts created by locals around for display. The visit to this model kind of village, is again a feast for eyes. My mind is filled with deep appreciation for creativity of these villagers. 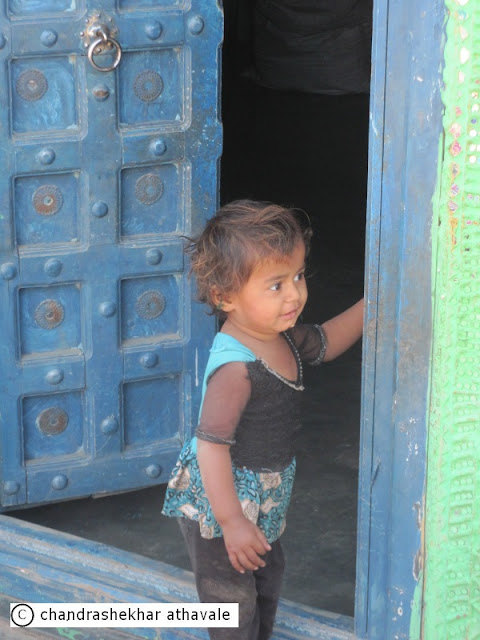 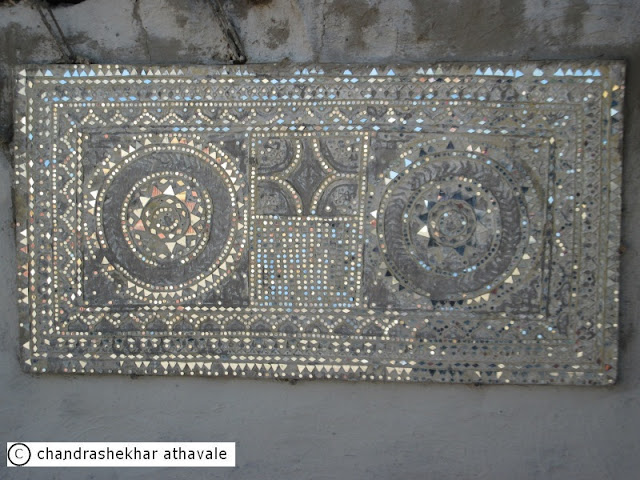 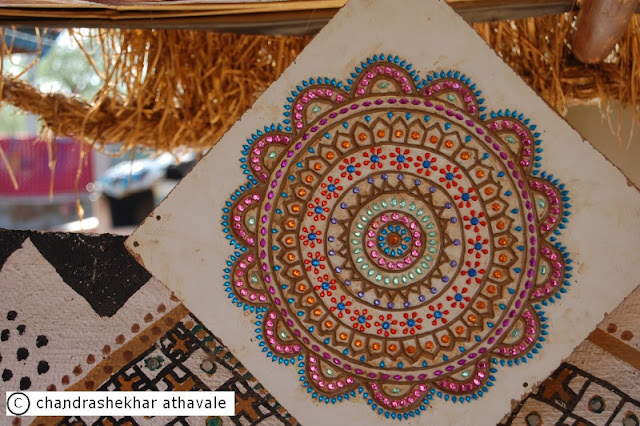 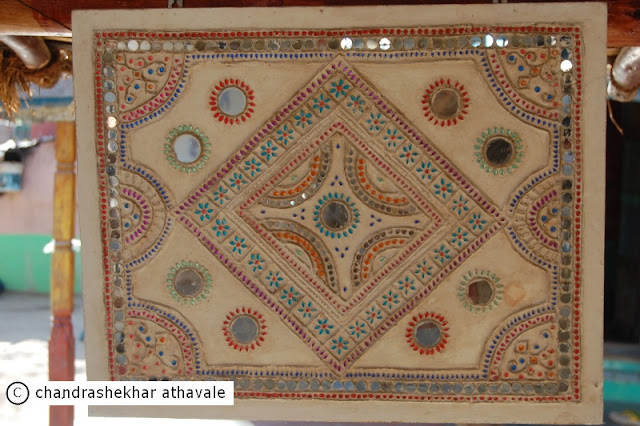 It is almost evening, as we finish our visits to villages but instead of returning to the camp, we push on further to north east to a guest house, where evening Tea and biscuits have been arranged by the organizers. After refreshing ourselves, we get ready for the final and perhaps the grandest spectacle of the day; the white desert.

The Banni or grasslands of Kutch are spread around the northernmost livable lands of Kutch. Further to north, lies a huge desert, where there are no villages and no one lives. This desert, extending between 50 to 125 Km in North-South direction and more than 300 Km eastwards from the western seaboard of India is not an ordinary desert filled with sand dunes. It is special desert known as Rann. It gets filled up with few feet of sea water during Monsoon months every year and drains itself off in winter, creating marshlands and finally turns itself into a dry and harsh state in summer months, with flaky dry soil all over. Some patches of this vast desert, when the sea water drains off, retain vast layers of pure salt (Sodium Chloride) on the surface, creating almost a magical effort. These white stretches are known as White desert and I am on my way to this rare spectacle created by mother nature.

The bus stops and I get down and look ahead. In front of me, I can see a long bamboo barricade restricting entry only to pedestrians. No vehicles except camel carts are allowed further. Beyond the barricade I see a sea of humanity. Hundreds of people gather here on each day of winter months to watch the grand live show of sun setting down beyond a white horizon. Further away, almost on the horizon, I see a pure white band spread from west to east. That is my destination. The White desert.

I clear through the barricade. No plastic stuff like bottles or bags can be carried any further. The soil is greyish-brownish and very wet at some places. There are small puddles of salty water at many places.

Just at the beginning of the white desert, a group of local artists have created a bamboo platform. A troupe of singers and musicians are singing folk songs of Kutch, pleasing to the ear, as most folk music always is. I get myself photographed with the troupe.

As I trudge on further, the soil starts becoming dirty white and finally turns pure white. Now, in all directions, except for the one from where I have walked here, the land is pristine white, stretched right to the horizon. It appears that as if by magic, freak snow fall has occurred here. The sun is about 10 to 15 degrees above the horizon and bright sun light makes small puddles of water shine and dazzle with sparkling golden colour. It is an absolutely a divine sight, I probably would never forget it in my life time. 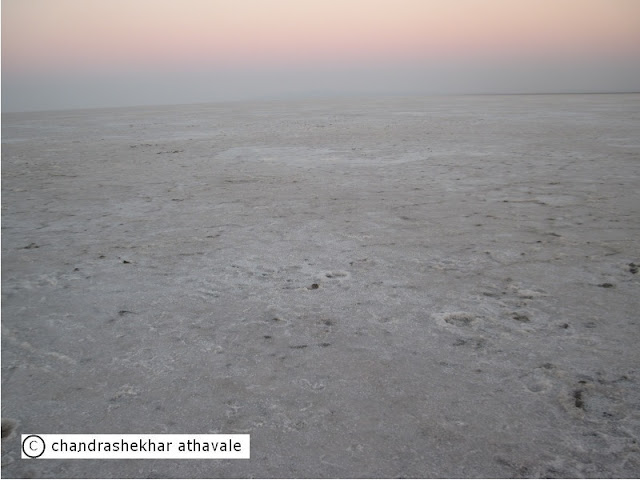 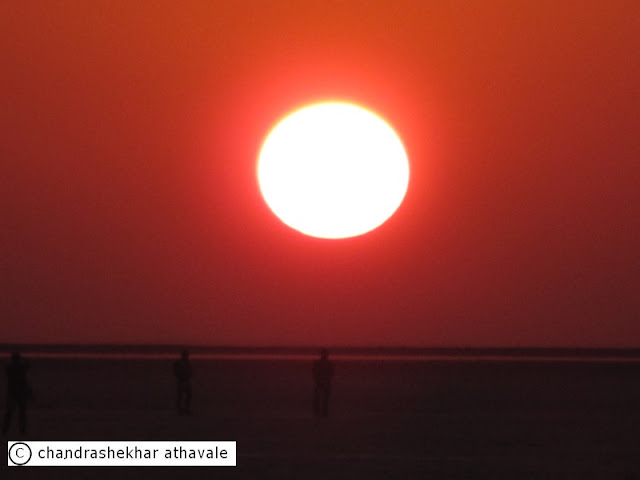 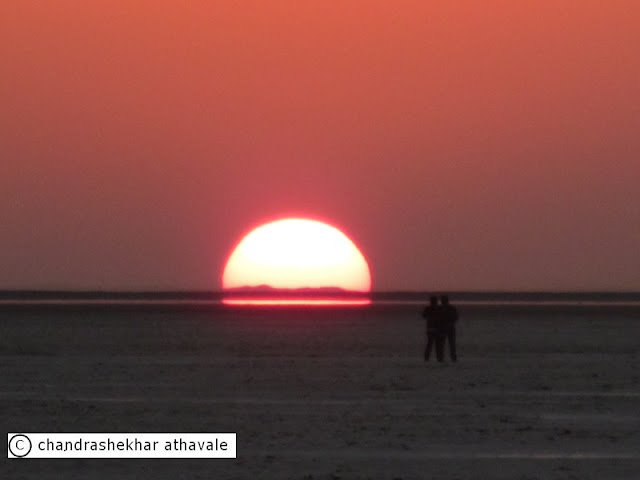 Time moves on. I take uncountable number of photographs of the surroundings. The Sun, now almost on the western horizon, is a bright ball of yellow and orange. I had never seen before, the sun so pure and divine. Towards east, I can spot the moon around 40 degrees above the horizon, already looking milky white. Finally, sun touches the horizon and in one instant all the puddles from my position to horizon, suddenly light up to golden orange. They appear like vast extensions of the sun behind them. In next few minute, the last few traces of the sun are all gone. Along with the sun, golden orange puddles of water also disappear.

I start walking back towards the bus. While walking, I suddenly realize that the ground around me has suddenly lighted up to a milky white colour. With the sun gone, not leaving even a small orange trace on the horizon, the moon has now started showing its own magic to mother earth. The White desert is now taking a brilliant white silvery hue. The effect is mesmerizing to say the least.

I walk back to the bus stand and return to camp. After a piping hot dinner, its show time again. The camp has an amphitheater, where a troupe from Ahmadabad, is presenting 'Kuchipudi' dances from another Indian state, “Andhra Pradesh.' I wrap up myself in warm clothing as biting desert cold has returned and watch the performance.

Later, as I return to my warm bed in the tent, my thoughts are centered about tomorrow, when we shall be crossing this vast wilderness of the Rann and go to the edge of the north bank, where land becomes livable again. But land on that bank, does not belong to India any more.