Kutch and Kathiawar: A tryst with history, Part XII 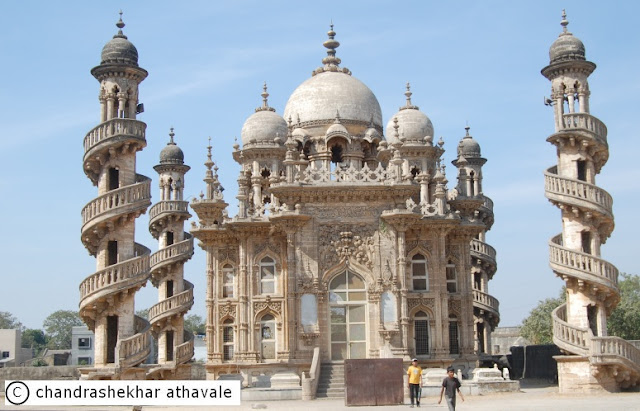 One of the Nawabs of the Babi family, Mohammad Mahabat Khanji II ruled over state of Junagadh in a period, 1851 – 1882. Almost 10 years after his death, a tomb or a Maqbara was built on his grave in 1892. I am on my way to visit this historic building. This building is in the middle of the old city; one of the highly congested areas, today. The building however, is so imposing that it is quite impossible to miss it. The tomb is an architectural masterpiece that has come out of a mixture of Hindu, Moorish (Medieval Morroco) and European influences and is very remarkable. It is also probably the best preserved monument from the Babi Nawab's period. The structure is quite traditional with a central domed hall, flanked by four minarets along four corners. The minarets have external stairways that spiral in opposite directions to maintain symmetry and creates a stunning effect. On its side, stand the Jama Masjid and Vazir’s Maqbara, which itself is also a remarkable piece of architecture. 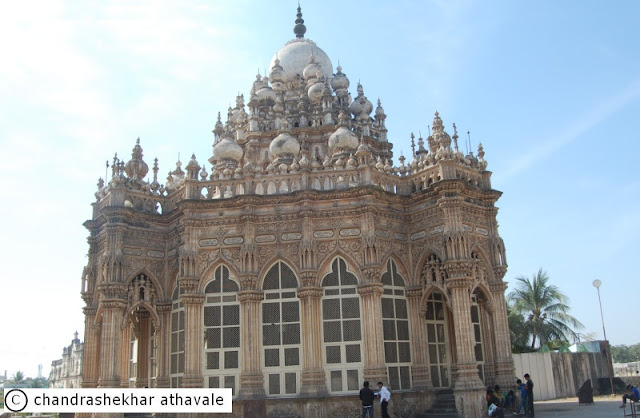 The buildings are located in a large campus which are being maintained in a very poor fashion. There is no upkeep and I see boys playing cricket. The yellow grass around the monument requires mowing. 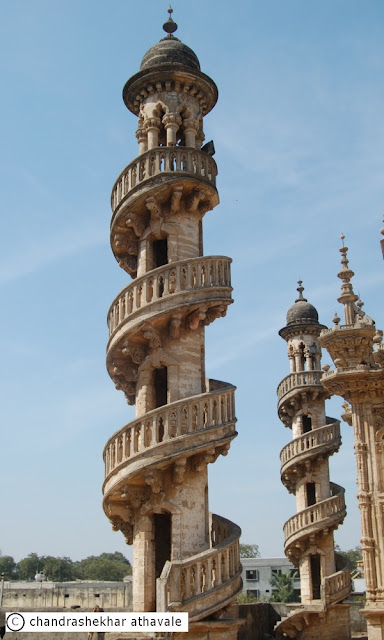 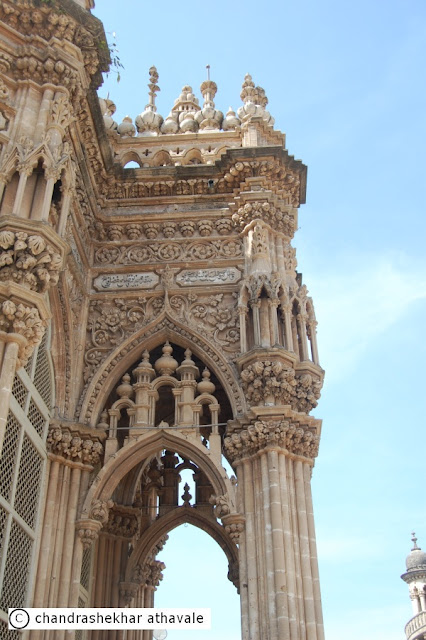 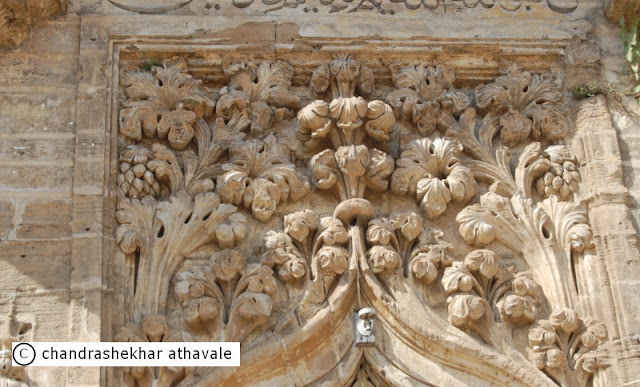 The building has some very unusual features very uncommon in India. I can see on the sides of the doors and windows many Gothic columns and the windows themselves are styled like french windows, from floor to lintels. Some of the carvings are also noteworthy. Mahabat Maqbara is one of the neglected tourist sights, but definitely worth a visit. 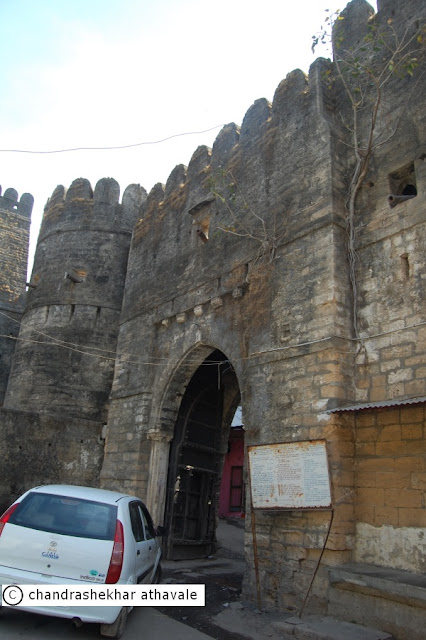 I now move on again to outskirts of the city, where an old fort named as 'Uparkot' which really means Upper Fort, stands. The fort ramparts are built almost on ground level with circular towers at the corners. A car very easily can enter in the fort and can take you around saving much of trouble. As we enter, I can see a couple of temples of Hanuman and Ganesh. Once inside the fort, road climbs up sharply and I find myself at a much higher level, almost at the top of the bulwark. There are two guns kept here, named as 'Neelam' and 'Manek'. According to the legend, these were cast in Cairo. The guns were used by a Turkish naval force, invited by Sultan of Gujarat in a war against Portuguese in Diu in the year 1583. Turks were defeated and left the guns behind and were brought here and kept on the fort. 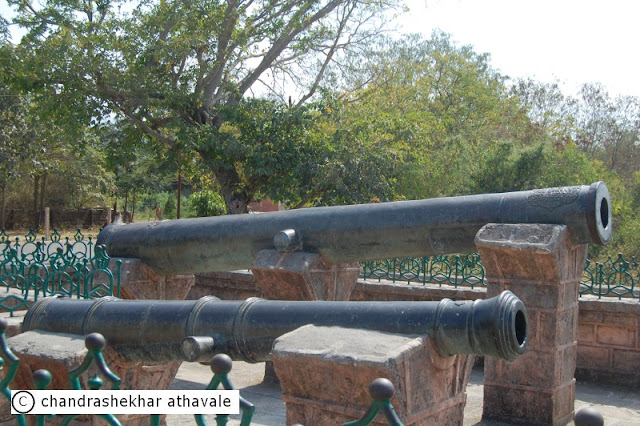 Opposite the guns, stands a white coloured old and abandoned building of Jammi-Masjid. The building has three central courtyards with roofs that have octagonal openings. There might have existed 3 domes on the openings in the roof. It is believed that this 140 pillared building was a Palace of one Rani Ranak devi, married to Raja Rakhengar. This residence of Ranak devi was converted into a mosque by Muhammad Begada after his conquest of Junagadh, when he defeated Chudasama ruler, Raja Mandlik III in 1473. The main or east side entrance to the building, is one floor lower than the building floor, indicating a possible arrangement to facilitate travel on an elephant. Just outside the north gate,there is a spot, from where a clear view of Mount Girnar is possible. 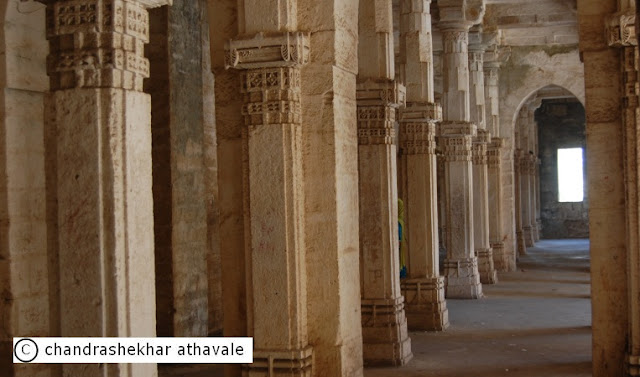 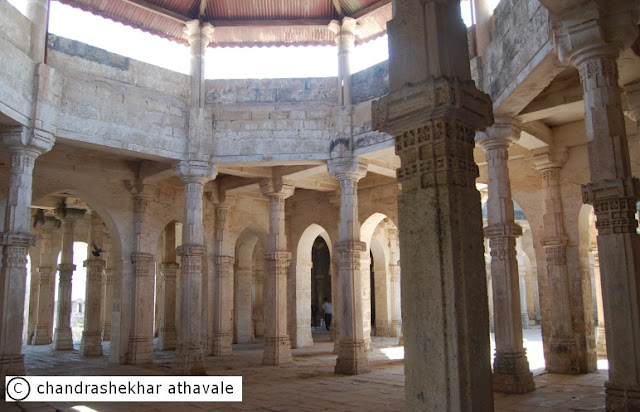 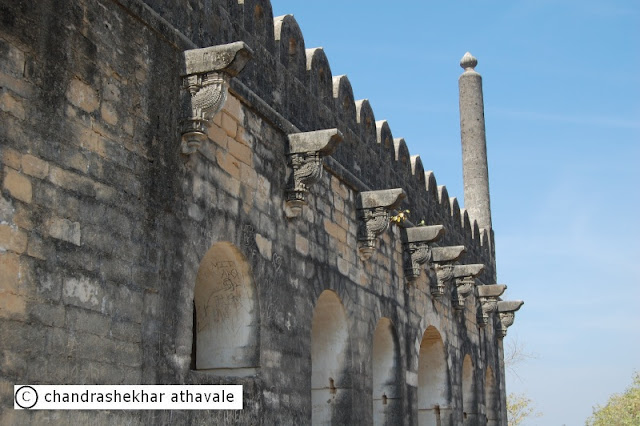 About 500 meters to northeast of Jammi-Masjid, there are two deep wells called 'Adi-Kadi Vav' and 'Navghan Kuwo.' The first one looks like a man made canyon because of the weird rock patterns seen on the side walls in the rock. This well is 41 meter deep and can be approached by a flight of 164 cut steps spread along a 81 meter long and 4.75 meter wide ramp. I try to go down the steps. After going more than half way down, I realise that the well is filled with garbage only and that too, mainly plastic. I beat a quick and hearty retreat. The other well, named after Chudasma dynasty Raja Navghan (1025-1044 CE), is perhaps deeper and the steps go round the well. I find myself short of being enthusiastic to go down the steps as there is nothing to see and just give up. 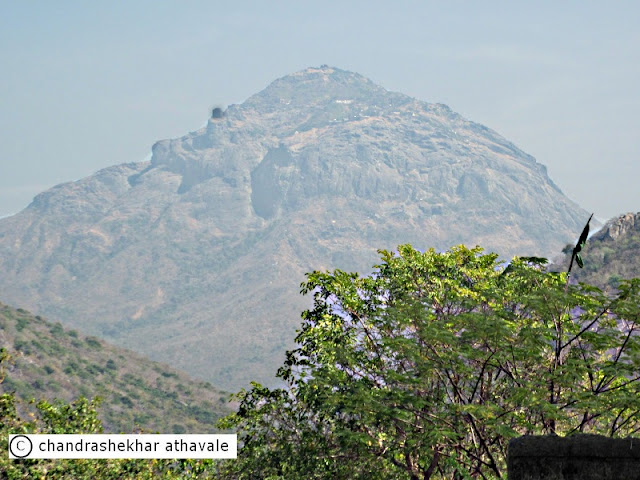 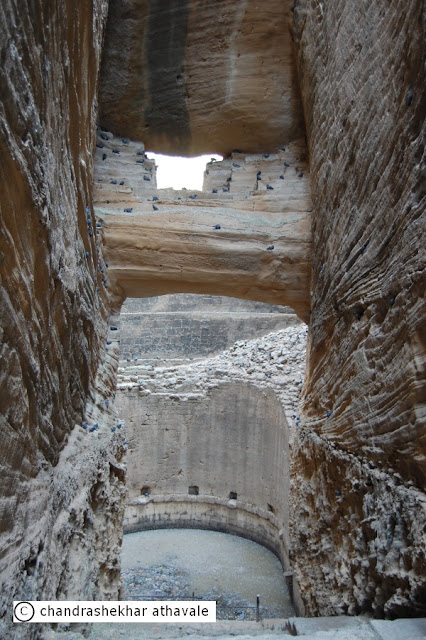 The last major attraction on Uparkot fort, are the Buddhist rock cut temples. I have seen number of such Buddhist caves in Deccan, but all of them were excavated on the face of cliff, starting at bottom most level and going up one or even two stories. The Uparkot caves are radically different from this construction prevalent in Deccan. Here, the caves have been excavated deeper and deeper in the rock, making a real subterrestrial abode for the monks. The caves are excavated, around three open shafts or a ducts of rectangular shape. Since these shafts are open to sky, fresh air can reach the bottom of the pit, easily. The monk's cells and prayer halls have been dug around the shafts on two stories, joined to each other by stair cases. 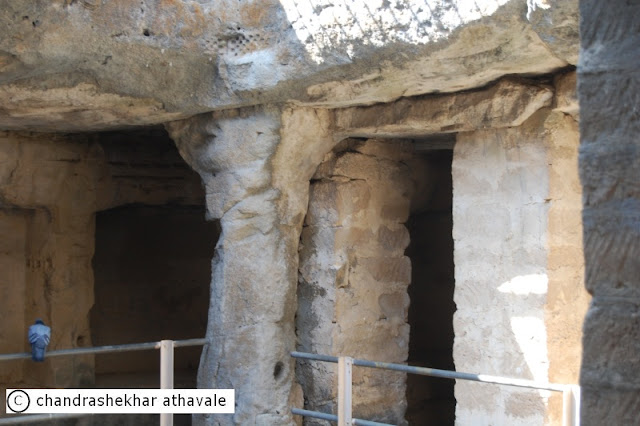 I take a stair case, which leads me down to a lower floor. A passage from here leads to the main hall (open to skies through second shaft) on this floor. This has been excavated in a very crude form. The walls, pillars and recesses in the walls are all excavated without any fineness or art form. This probably indicates that these have been dug much earlier than the lowest part. Two flights of stairs take me to the lowest floor. The main hall of this floor (partially open to skies) contains exquisitely carved pillars, whose base, shaft and the capital contain uniquely decorative designs. The pillars are not circular but are having a polygonal shape with 24 or even 30 sides. The plinth bases are square and have intricate designs engraved on them and florally ornamented capitals carrying animal and human figures. The walls are adorned with horse shoe shaped Chaitya arches with Buddhist railing pattern carved below it. Within the arch, a human couple (in some places, two women) with ears like that of a rabbit, are carved. A continuous band of lattice design is also carved below the arches. Flowers are shown on the horse shoe arches. The designs can be related easily to Satavahan period rock cut temples. 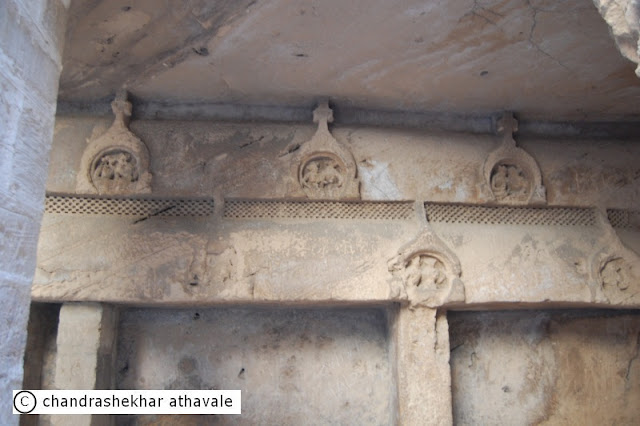 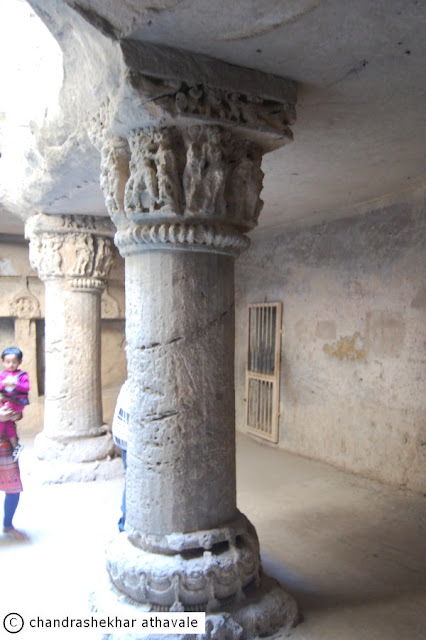 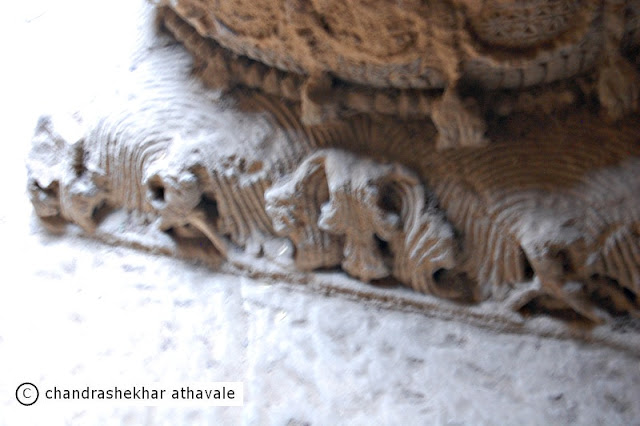 Popular Buddhist theme of Garland carriers engraved on the
base of the pillars; A Graeco-Roman Influence on Indian art

Each pillar base, just near the floor has probably the famous garland bearers that are seen on the Satavahan period Stupa at Amaravathi. Very clearly a Graeco-Roman influence on the art in India. This cave can be dated to around 2nd century. The third shaft on south leads to a water cistern where rain water was stored. On one side there is a platform for bathing.

It is very clear from the fineness and detailed sculpturing of figures carved on pillars, that even though the lower cave and pillars were excavated in very early period, probably third century BCE, the lowest floor has been done much later or around 2nd century CE.

I come out of the caves. We have tea at one of the roadside shacks and start back for Sasan. After a night's rest, tomorrow we start for Rajkot, where I would be catching a flight for Mumbai and then a bus ride to Pune

My Kutch-Kathiawar excursion is now coming to an end. The memories would surely stay with me for my life time. It has been a wonderful fortnight to say the least.