Kutch and Kathiawar: A tryst with history, Part IX 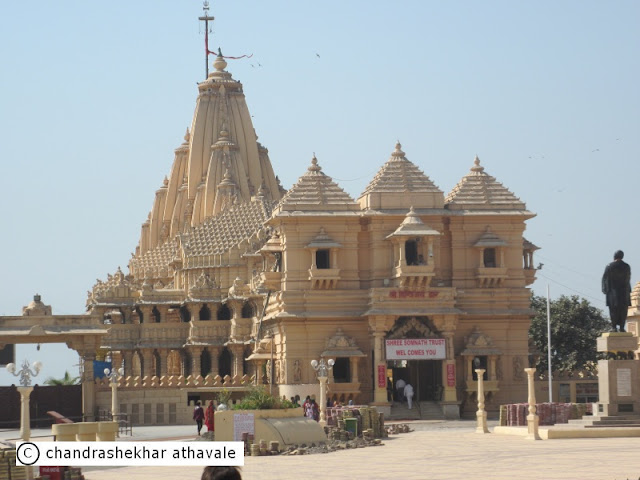 Similar to many monuments built in ancient and medieval India, The new Somnath temple also has a massive facade structure, known as “Shri Digvijay Dwar.” This massive structure built by using sandstone, consists of three adjacent towers, each having its own spire. The main gate to the temple is in the middle tower. There is a small porch supported by two massive pillars outside the gate. The gate can be closed by two heavy wooden doors of traditional Gujarati design. There are 5 windows with balconies on the front side and few more on the two sides of the facade structure and some full relief carvings of some Gods and Goddesses in line with the lower windows. As I walk along, the spire of the main temple rises just behind the spire of the middle tower of this facade structure. 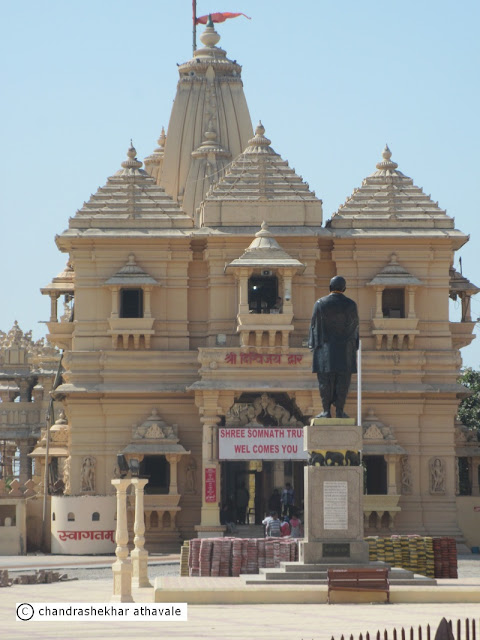 More security at the gate. I have to pass through a metal detector and another body search for any metallic objects on me. Ahead of me now is the main structure of the Somnath temple. There is a forecourt with nicely manicured garden, that surrounds the temple. In many temples of India, visiting time is always restricted to few hours. Here in Somnath, the temple is open for full day and a leisurely visit is possible. 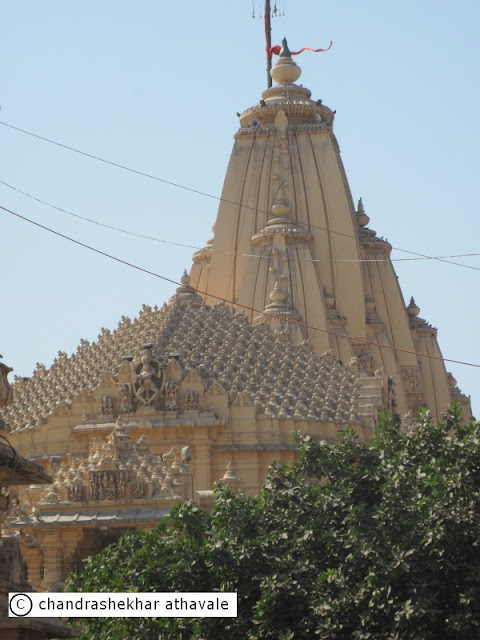 I walk to the main Mandapa of the temple. At the entrance, just above the ceiling, there is a beautiful full relief carving of 'Nataraja.' This is again similar to design of 'Chalukya' temples at 'Pattadakal,' in Karnataka state of India. The Mandapa ceiling has hundreds of miniature spires projecting upwards, creating a nice effect. The Mandapa itself is an open structure supported on pillars and again reminds me of the Viththala temple at Hampi in south India. The temple trust has started coating the sandstone pillars with golden paint and personally speaking, I do not like this new colour. The original pinkish colour looks much better. In the sanctum, the walls are all covered with gilded metal sheets and decorated with semiprecious stones. At the center of the sanctum stands a tall jet black Shiva Lingam, adorned with gold ornaments. The temple is very imposing and definitely worth a visit. Afterwords, I go round the sanctum, whose walls are covered with many miniature full relief figures. Just behind the temple, I find plinth level ruins of the old 'Parvati Temple.' 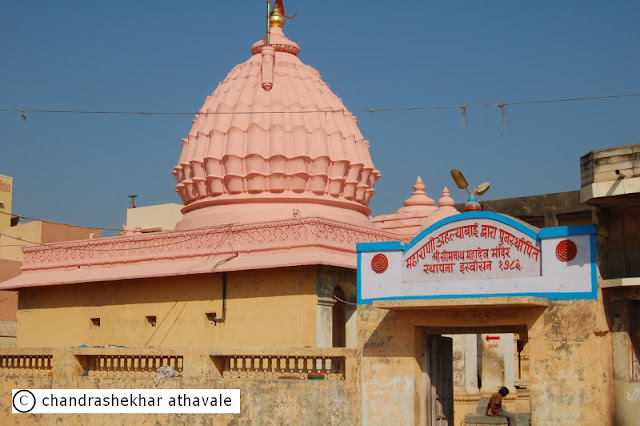 Shrine built by Ahilyabai Holkar in 1783

Quite satisfied and happy with my visit, I come out and start walking around the temple compound. Little further ahead on the right side, is a small shrine which was built by “Maharani Ahilyabai Holkar” of Vadodara state in 1783 after destruction of the ancient temple on orders of Mughal Emperor Aurangzeb in 1670. This shrine is modest and very simple. Yet it's importance can never be undermined in any way. For almost 100 years, there was no Shiva Lingam shrine at Prabhas Pattan, after ancient temple was destroyed at the orders of Aurangzeb. Ahilyabai built this shrine so that the devotees, who came to Prabhas Pattan, could pay obeisance to their lord Shiva. 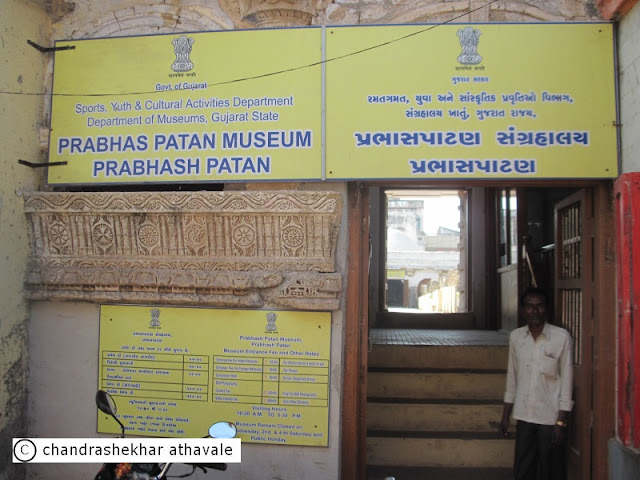 I continue walking along the boundary. Soon the road narrows down and turns right in a very narrow lane with shops and houses on both sides. Walking for about half Kilometer in the narrow lane, I finally find the place I am looking for; 'Prabhas Pattan Archaeological Museum.' I have mentioned earlier that the temple , originally built by Chalukya king Kumarpala and subsequently modified by several kings, including Bhimadeva, was dismantled by the Somnath trust in 1950 under expert guidance of the archaeological department. The dismantled stone blocks and original carvings have been kept in this museum. 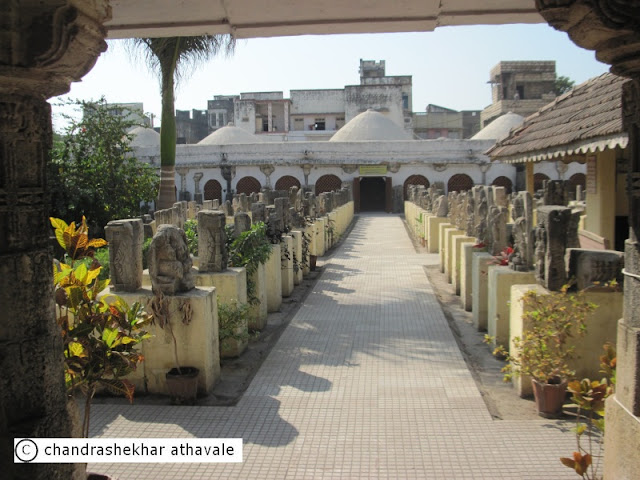 This museum itself is in a very obscure, nondescript place. The person in charge tells me that there was an ancient temple of the Sun at this place. The museum looks very ordinary from outside but consists of hundreds of superb specimens of the medieval art of India from 11th to 16th centuries. 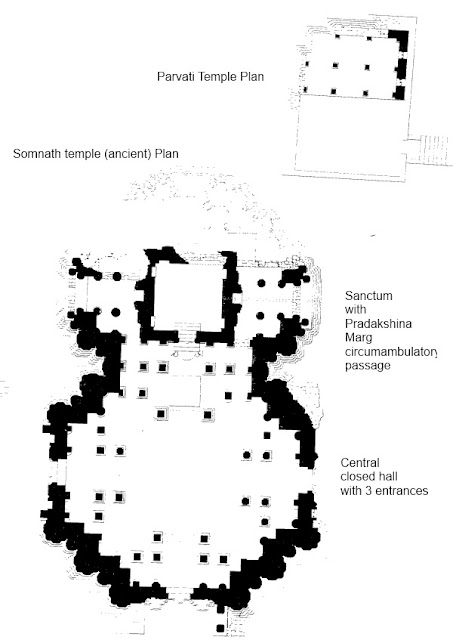 Plan of ancient temple as drawn by Henry Cousens in 1931

The ancient temple as it stood in ruins till 1950, is described by Henry Cousens in his book as:

“The great temple, which faces the east, consisted, when entire, of a large central closed hall, or gudhamandapa, with three entrances, each protected with a deep lofty porch, and the shrine – the sanctum sanctorum – wich stood upon the west side of the hall, having a broad pradakshina or circumambulatory passage around it. The latter was lighted by a large balconized window in each of its three sides away from the hall, and those formed a very pleasing feature in the general appearance of the building from outside. That at the back, or west side have fallen, and so have the three porches.”

He also mentions that the temple must have been at least 140 feet long. It also appears from his description that vicinity to the sea and the salt spray, has created a great amount of damage to the carvings on pillars and on walls of the sanctum. 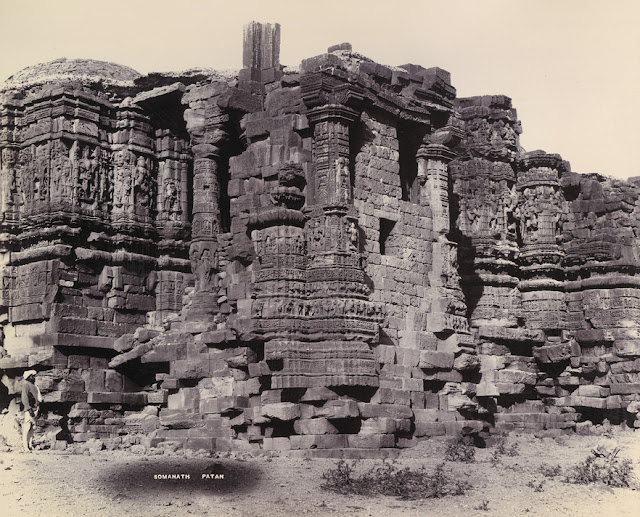 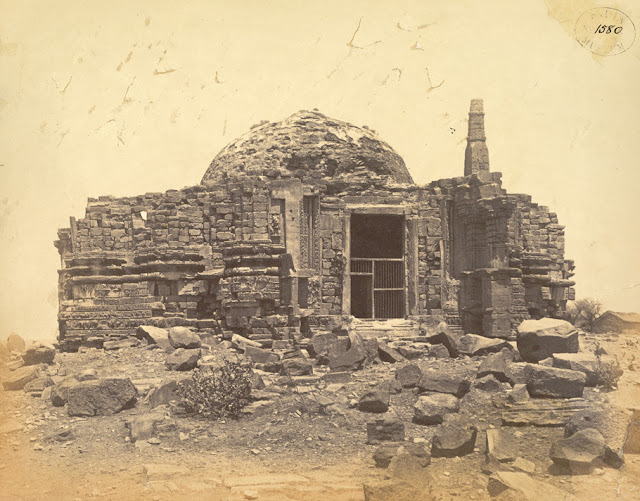 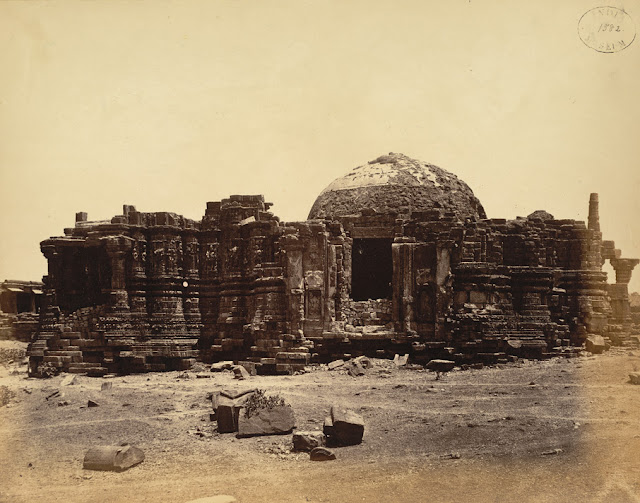 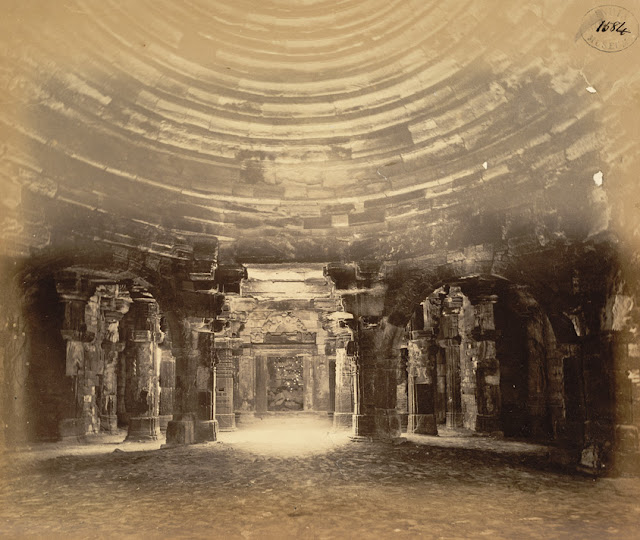 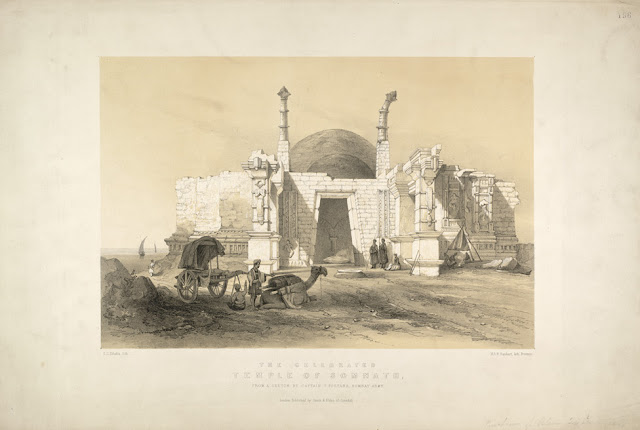 The museum displays many bass and full reliefs and stones from the roof, pillar capitols. I am quite impressed with the grandeur and the intricate carving work on this temple from twelfth century. The workmanship compares well with Pattadakal temples in Karnataka state. 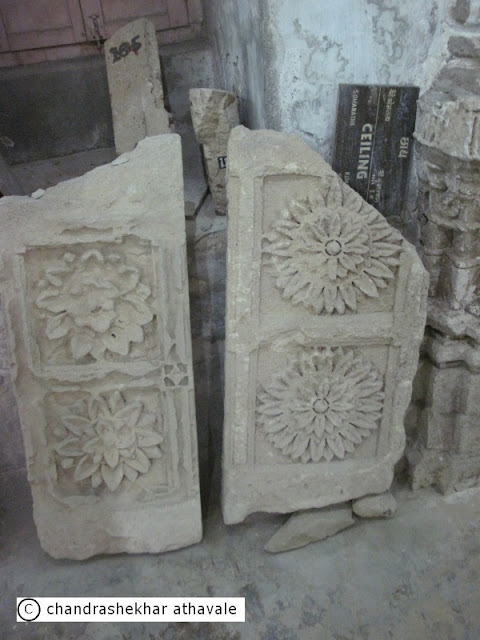 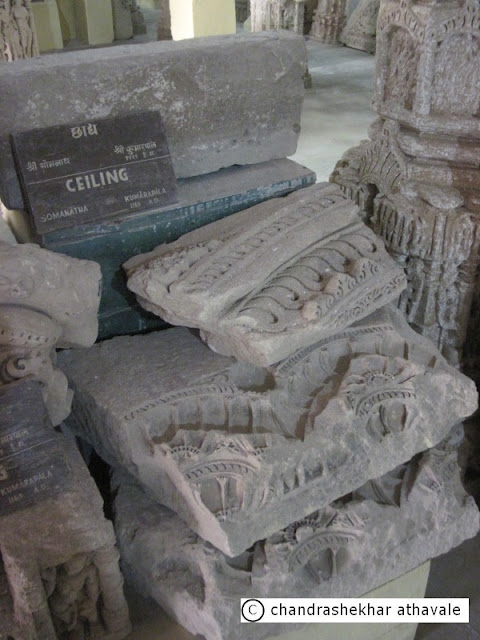 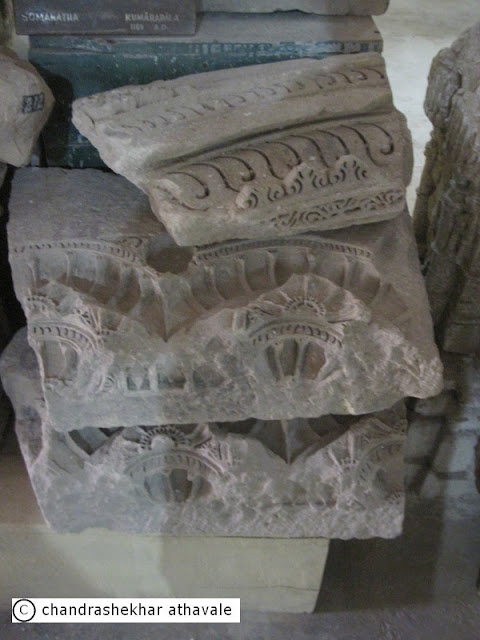 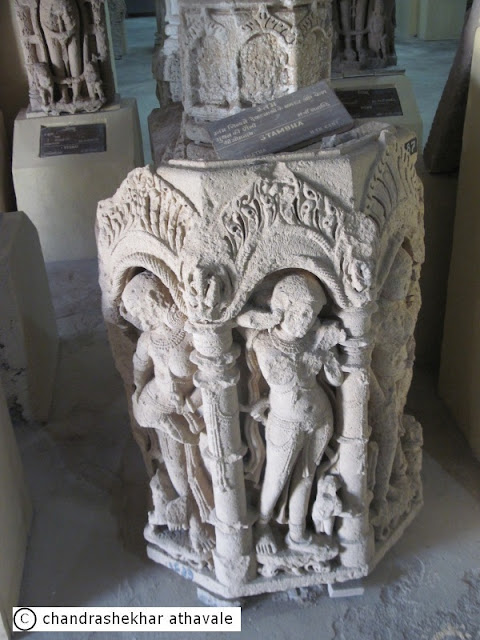 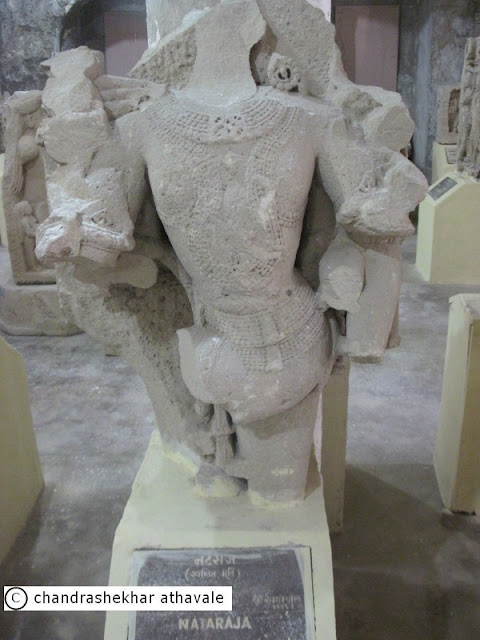 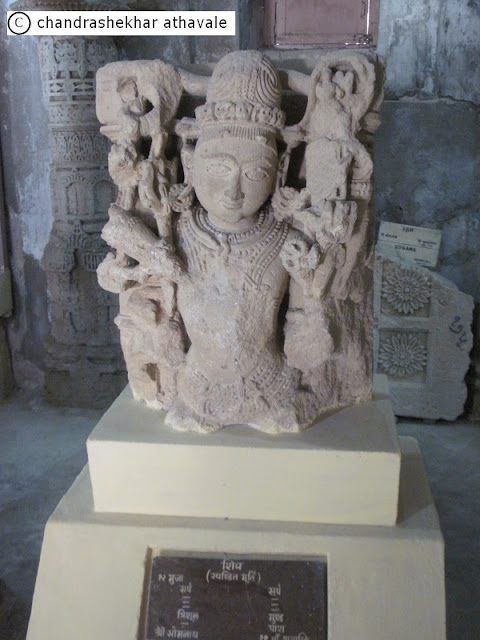 
After finishing our visit to Somnath, we take highway 26 to Talala and then to Sasan, which is located in the middle of a dense forest of Gir, the only place, where we can still find Asiatic Lions in their true environment. By the time we reach Sasan, it is dusk. As I settle in for the night, after a very nice dinner, I am reminded that early morning tomorrow, I have to go on a Jungle safari to meet the Asiatic Lion.