Kutch and Kathiawar: A tryst with history, Part VII 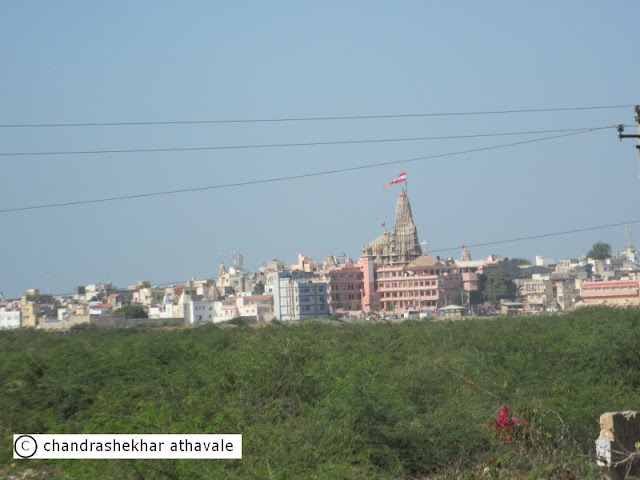 I manage to leave Morvi by 7.45 AM and cross the city by a road, that goes through most of the clock manufacturing factories in Morvi and joins National Highway No. 8A. We stop at Tankara and have a cup of Tea in an roadside 'Dhaba' and divert to highway 22, which takes us to Jamnagar via Dhrol. After bypassing Jamnagar city itself, we hit upon highway 6, which has some of India/s largest power and refining industries like 'Essar' and off course, 'Reliance Petrolium.' This highway however becomes a narrow 2 lane road, after 'Khambaliya' town and our progress slows down considerably. Even then, we manage to reach the coastal city of ' Dwarka,' considered as the ancient abode of India's most loved folk hero and God, Shri Krishna. 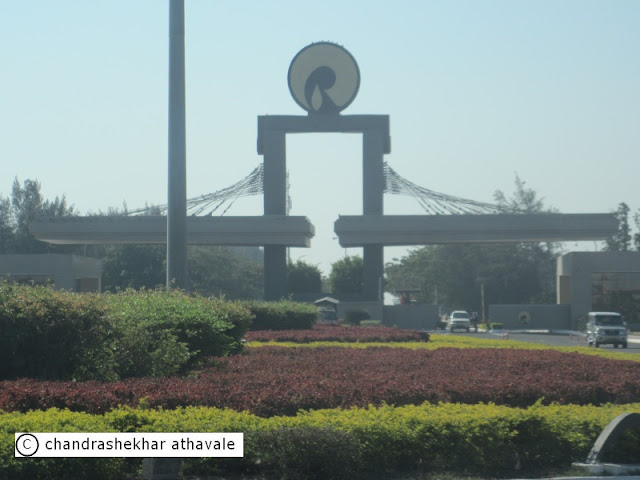 In India, Krishna finds a place everywhere. From ancient Indian scriptures like Mahabharata and Bhagvad-Gita, mythological stories passed from generation to generation, medieval verses written in 1200 AD by Jayadeva and known as the 'Geet Govinda,' which depicts the divine love of Krishna, an avatar of Vishnu, for his consort, Radha and even in modern poetry, Krishna is always there. He is a perfect folk hero, who shows great prowess and bravery against his foes, compassion to his friends and poor, a romantic hero to his lady loves and finally a great philosopher as he gives a discourse on Indian philosophy and Indian way of life to Arjuna, a worrier Prince from Mahabharata. It is believed that this greatest Indian folk hero and king, had established his kingdom at this very place 'Dwarka,' located on India's western sea board. It is obvious that this city is a sacred place. From far corners of India, devotees throng here every day, in hundreds, to pay their obeisance to the lord. 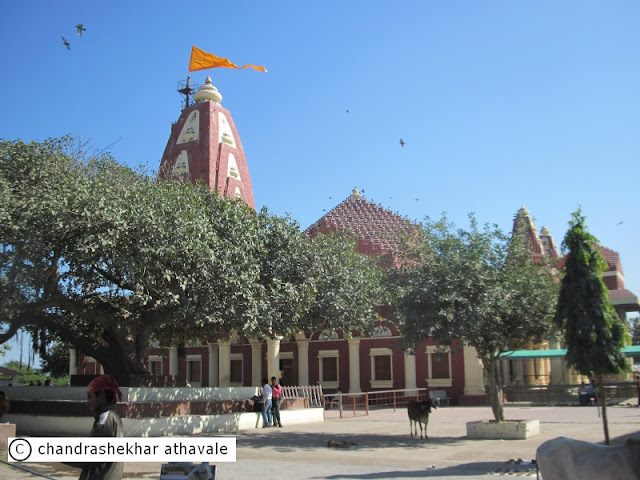 I check in a hotel, have a Gujarati vegetarian thali (full meal) for my lunch and then set off for an afternoon of sight seeing. The first stop is a Shiva temple called 'Nageshwar,' which was built by one Late Sajan Kumar, who had made his fortune by selling music cassettes and CD's. He must have spent lots of money on this temple, which is quite huge. Luckily the temple is rather plain looking and without any garish ornamentation. He has compensated for the absence of any garish ornamentation by erecting a giant statue of Shiva in human form next to the temple, very similar to a statue I have seen, also on western sea board of India, but much towards south, at Murudeshawar, in state of Karnataka. 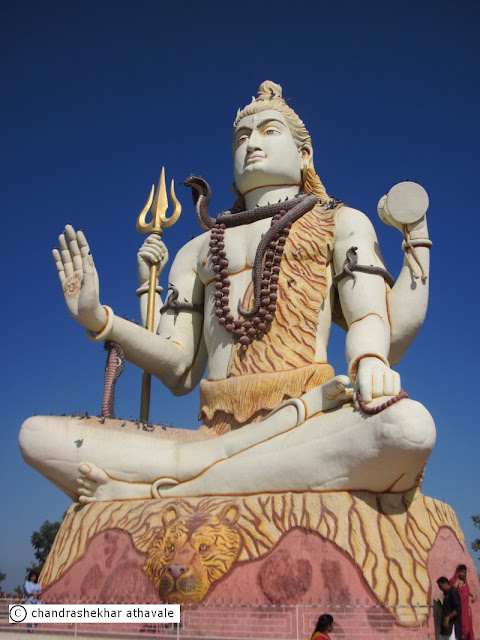 I continue further and stop at a place called 'Gopi Talao,' a little pond with small temples dotting on its southwest perimeter. It is a nice place with few ducks floating on water. The temples, all claim to be the original and principal places of a plethora of deities, whose names also sound foreign to me. We continue further on the road, pass the 'Tata Salt' factory at Mithapur and finally reach the western most tip of the Kathiawar peninsula. A port known as 'Okha' is located here. My interest however is slightly towards east, where a small jetty has been provided mainly for fishing vessels. 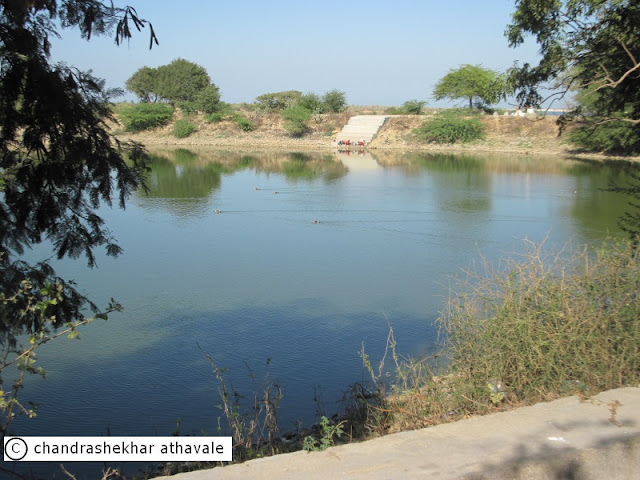 About 5 Km east of this jetty, there is a small island known as 'Bet Dwarka.' I am told that oldest temple of Lord Krishna is located on this temple. Just near the Jetty, I find a large sized launch, getting filled with people. The boat has a very funny sitting arrangement. Along the sides, there are wooden planks to sit. Every one else just stands, where ever he can find a place. In the middle, there is a cabin. I am directed towards that. It is one of the most uncomfortable sitting arrangements I have seen any where so far. Inside the cabin the ceiling is so low that you need to squat, if you do not wish to get your head banged against one of the steel angles provided to support the roof. I sit down. In a short while, the boat gets completely full and the master of the ship appears and starts the engine. A helmsman takes charge of the helm. He has strange looking levers and handles, which probably are the gear shifting levers and accelerator levers for the diesel engine humming somewhere below. Its fun to see him operating the contraptions, but the boat gets underway. As soon as we leave, hundreds of sea gulls appear over board making a big racket. People keep feeding the birds and they keep depositing their droppings on heads and clothes of the people standing in the boat. After a slow crawling journey of 25 minutes, we touch the jetty on 'Dwarka bet.' 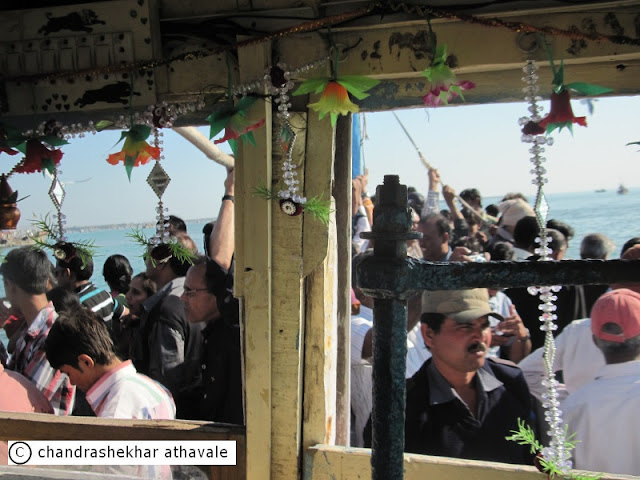 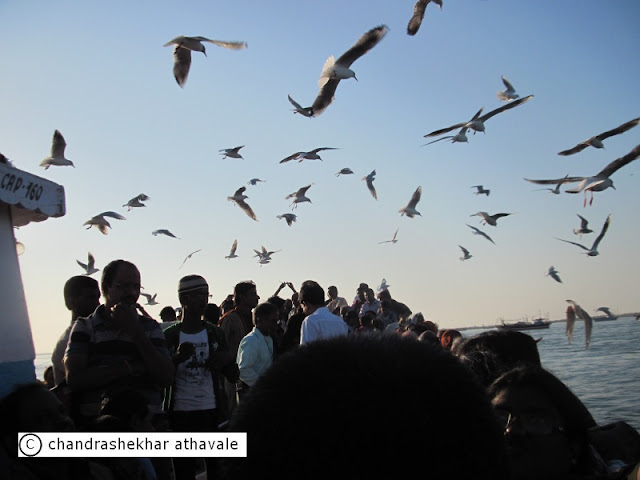 I get down and walk towards the temple. This temple, supposed do be the oldest temple of Krishna, is quite unimpressive and almost in dilapidated condition. Some efforts are being made to restore it. However, it is definitely not worth a visit, unless you are a serious devotee of the lord. The return journey is slightly better because, the master of the boat, restricts number of passenger. I feel that the main reason for this is that the boat is leaky and taking water and he does not want to take any risks. Even then the number of passengers is not very small and sea gulls accompany us and shower their droppings on us. 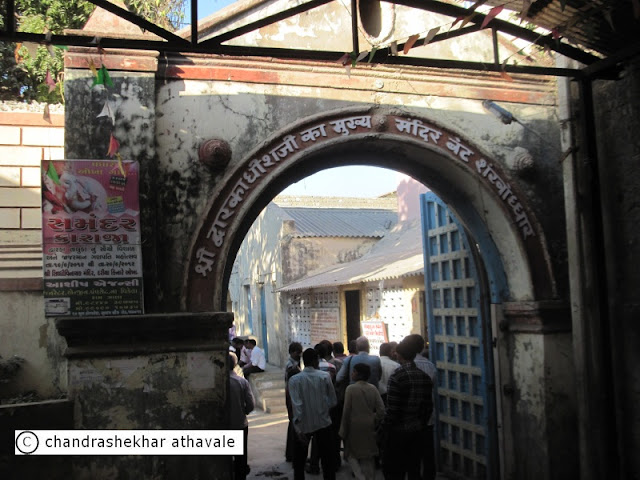 The return journey to Dwarka is quite uneventful except in one field, we find a large flock of big birds landing and finally reach a temple known as 'Rukmini Temple.' This temple is dedicated to King Krishna's principal queen, 'Rukmini.' The temple is modest, but I find it quite interesting. From the bass and full reliefs on the sides, it is obviously not very old. Most likely to be from thirteenth or fourteenth century AD. The temple has a porch, then the main mandap with an dome or hemispherical top, which might have been added later and a sanctum or 'Garbhagriha,' somewhat recessed. The outside walls are entirely decorated with bass and full relief figures of Gods and Goddesses along with male and female figures. 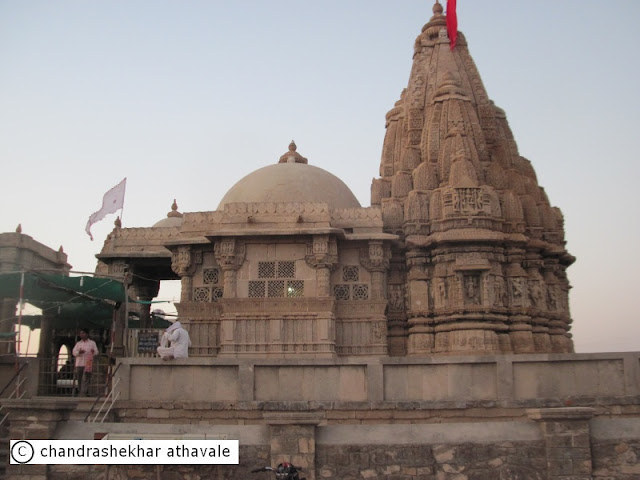 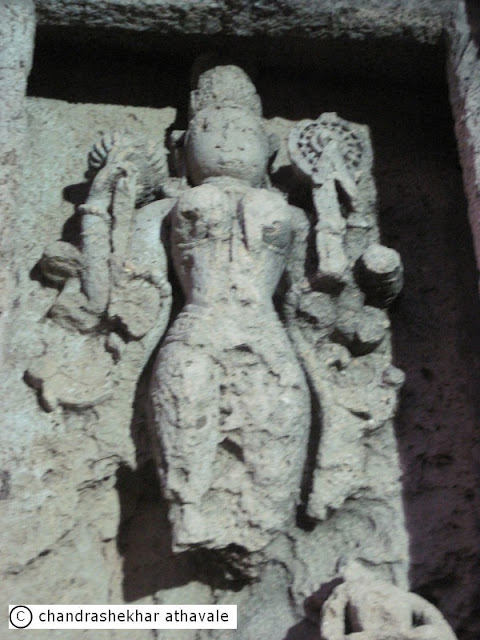 Full relief carving of Vishnu on wall of Rukmini temple

I finally return to Dwarka city for the main attraction, 'Dwarkadheesh' or King of Dwarka temple of Lord Krishna. It has fairly large sized premises, consisting of a 7 storied main temple, a Shankaracharya temple and some more small temples. The wall are well covered with intricate carving. However, I did not find many human figures here. I can see mostly design patterns and some elephants carved on the walls. The temple is jam packed with devotees. I finally manage to find a spot at rear, from where I can have a look at the idol. The idol, made from black stone, is totally covered and adorned with dazzling gold ornaments starting with head gear. Obviously the temple is very wealthy. 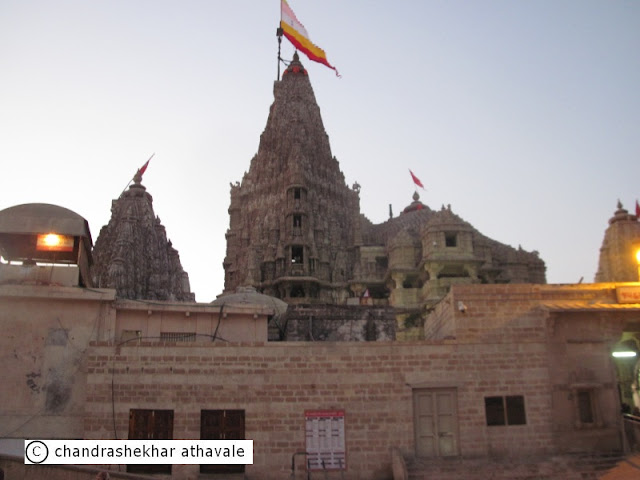 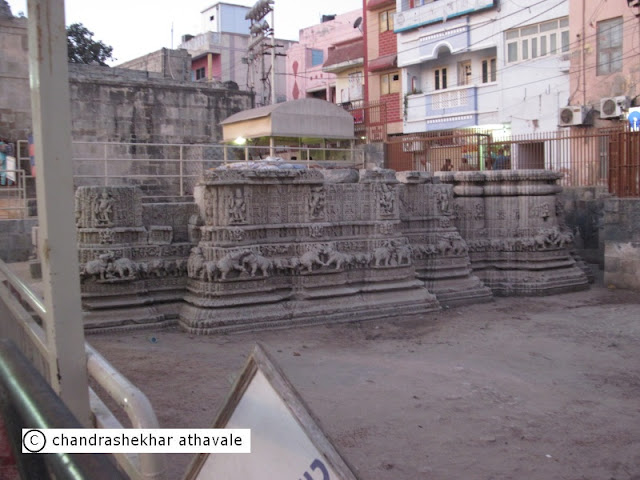 Plinth of an excavated temple near Dwarkadhish temple

As I come out, I see on my left, ruins of an ancient temple discovered by Archaeological Survey of India in 1979-80. These ruins were found, when a two storied building adjacent to the main temple was demolished to clear some space around the main temple and is believed to be from 9th century. The ruins have some fine engraving work done on them.

Tomorrow I travel to another great temple of India, that was destroyed number of times and re built again and again. The temple of Lord Shiva at Prabhas Pattan.