Caught in the cross winds? 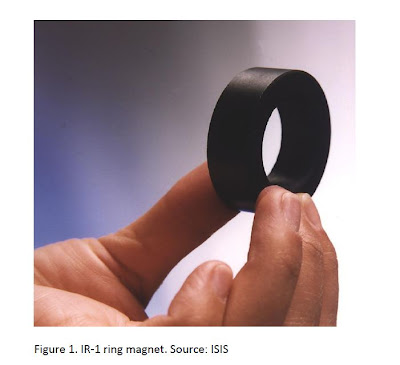 Chennai is the fourth larges city in India with a population of well over 5 Million. It is also an important trade center in the south India. Located in the business district of this city, near Mount road, Meeran Sahib Street is a small road dotted with hundreds of tiny shops in the dark allays around, that deal in electronic spare parts. Ferrito Plastronics happens to be one such tiny shop owned by one Mr. Bala Subramanian. The shop specializes in supply of small magnets that are used in loudspeakers, coils and medical equipment, besides those used as decorative magnets for fridges in households. 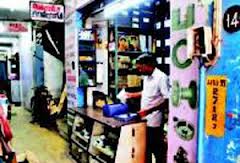 They buy most of the small magnets they trade, from a New Delhi firm known as ' Winner Electricals' and sell these in TamilNadu and Kerala states of India. The owner, Mr. Bala Subramanian however says, “ I largely supply coils to Singapore and Korea.” According to him his turn over every month is merely one hundred thousand Rupees ( Rs. 0.1 Million). However, the reported yearly turn over of his firm appears to be in a range of 20 to 50 Million Rupees.

Sometime in past, Mr. Subramanian had made a trip to China to visit a trade fair. He claims that he left his business card at one of the stalls there and that harmless act has put him in great unforeseen trouble now. He is at pain to explain that he has never done any trading with China, because he just can not match the prices there.

Institute for Science and International Security (ISIS) is a Washington based think tank dedicated to informing the public about science and policy issues affecting international security. The primary focus of this globally recognized institution, as stated on its website is on stopping the spread of nuclear weapons and related technology, bringing about greater transparency in nuclear activities worldwide, strengthening the international non-proliferation regime and achieving reductions in nuclear arsenals.

This ISIS, has recently come up with a report, titled 'Ring Magnet for IR-1 Centrifuges.' This report essentially deals with the clandestine efforts carried out by Iran by using dubious font companies floated by it in China using certain channels to procure nuclear equipment from different sources while routing supplies through China, using its lax trade controls. In this report, ISIS makes a mention of Mr. Subramanian's Ferrito Plastronics, as one of the small companies that might have supplied what are called as ring magnets through font Chinese companies.

According to this report, a person known as A. Mohammad Tahmouresi, owner of an Iranian trading firm, Jahan Tech Rooyan Pars, Shiraz, posted an enquiry on a Chinese commercial website, 51buyers.com, for 100,000 ferrite barium strontium ring magnets. The enquiry states that the magnets are for a “great factory” engaged in “new project.” This firm called Jahan Tech Rooyan Pars is a relatively small trading company that seeks a range of goods and would not be running by itself a large project. This firm has been already 'sanctioned' by Canada, on December 11, 2012, by imposing an asset freeze and a dealings prohibition because of proliferation concerns over 'nuclear proliferation' concerns. 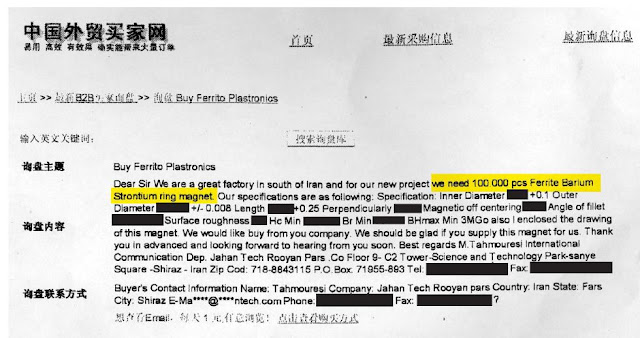 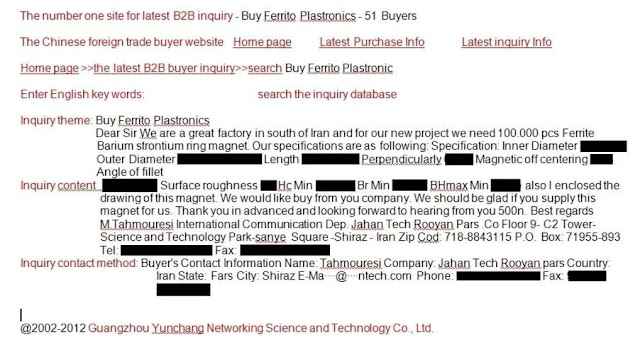 Chinese commercial website, 51buyers.com is an internet portal, where foreign buyers can meet potential suppliers. It is not known whether A. Mohammad Tahmouresi was successful in acquiring these magnets. The report then mentions Mr. Subramanian's Ferrito Plastronics, as a relatively small Indian company that appears to be offering its services in China. It is however unclear from the report, whether Ferrito Plastronics was responding to the enquiry or if A.Mohammad Tamouresi was contacting this company.

What is the truth? All over the world, millions of people leave their cards at trade fairs with exhibition stall holders, to indicate their interest in the product or trade in it. However since, Jahan Tech Rooyan Pars, is unlikely to have taken part in any Chinese trade fair, Mr. Subramanian's explanation does not appear to hold much water. Question remains as to how an Iranian firm found the name of this small Chennai trader in the first place? What is even more surprising is that even before Ferrito Plastronics has responded to its enquiry, Johan Tech. already says, almost pleading, in its order request “ We would like to buy from your company. We should be glad if you supply this magnet for us.” This report also highlights the fact that Mr. Subramanian's firm, even though small, is quite internet savvy as it offers its services elsewhere on the net, such as on www.indiamart.com.

It is more likely that Jahan Tech Rooyan Pars might have contacted several suppliers in different countries, via such internet shopping malls, and more promisingly, directly. One of the entities contacted, might have suggested name of a smaller company like Ferrito Plastronics as a possible conduit to procure the magnets from larger manufacturers.

Whatever may be the truth, Mr. Bala Subramanian is likely to face some rough weather in future and his small firm may be even 'sanctioned.'

Incidentally, this report also mentions some historical facts about the centrifuges that deploy these ring magnets. The IR-1 centrifuge is a copy of the P-1 centrifuge deployed in Pakistan that in turn was a 1970s Dutch design, stolen by A Q Khan while he lived in the Netherlands at that time. The Iranian advanced centrifuge is derived from the P-2 centrifuge, which Khan also stole in the 1970s.