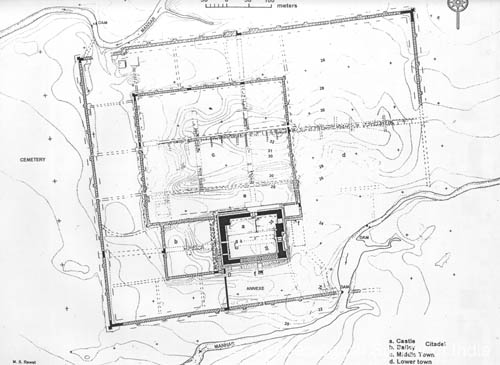 We saw earlier that Dolavira was an important trade hub of the Indus-Sarswati civilization in the south. It was also probably a regional capital controlling smaller settlements like 'Surkotada' existing in this region. Considering its time period, it can be said that Dholavira was nothing but a spectacular city that was well planned and built according to a plan. Archaeologists have been able to measure the dimensions of the city and its three main sectors quite accurately and have proved that the length and breadth of each and every sector of the city were planned to be integer ratios such as 5:4 or 4:3.

Dholavira had three main sectors. An Acropolis or an administrative sector (Citadel) consisting of a massive 'Castle' located on the city's high point and an adjacent 'Bailey,' a middle town separated from the administrative sector by a huge ceremonial ground and a lower town. The city accommodated between 15000 to 20000 inhabitants.

Archaeologists believe that the local ecology, climate and precipitation have changed little since Dholavira’s heydays, over last 4000 years. Areas around the Rann of Kutch even today, have no natural sources of surface water like perennial lakes, rivers or springs and the groundwater is mostly brackish and unfit for animal or human consumption, even for agriculture. The only source of potable water remains the unpredictable monsoon rains that flood the small rivulets during summer months. This region is almost at the edge of monsoon belt and monsoon failure is not uncommon. 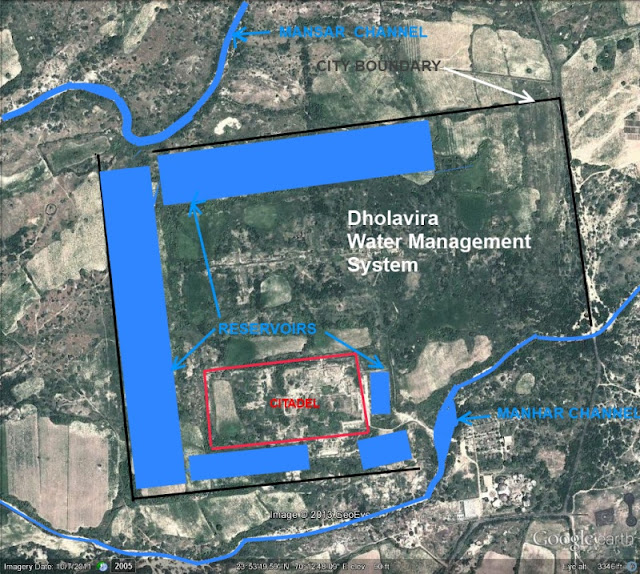 If that was the case, how did Dholavira's planners and administrators managed to supply potable water to 15000 or 20000 inhabitants year round and also for whatever little agriculture or horticulture they had? This was the question that had puzzled me, ever since I had decided to visit this place. The total area of Dholavira, inside of fortifications was about 47.57 hectares or 117.49 Acres. According to Archaeological survey of India, Dholavira's planners had allocated out of this, as much as 10 hectares or 24.7 acres of land for creation of water reservoirs. According to conservative estimates, these tanks could hold 300,000 cubic meters ( 79,250,000 gallons) of water. Not satisfied with this storage, additional water storage was created outside the fortifications and floors of many reservoirs were provided with deep depressions or troughs, where water could remain in exceptionally dry years. A simple calculation shows that for 15000 inhabitants, more than 54 liters of water per day was provided by the city planners. Even today, not many places in India can match this figure. It is very interesting to find out, how Dholavira managed to provide such adequate quantity of water to its residents in an arid area? A report by Archaeological survey of India says and I quote: 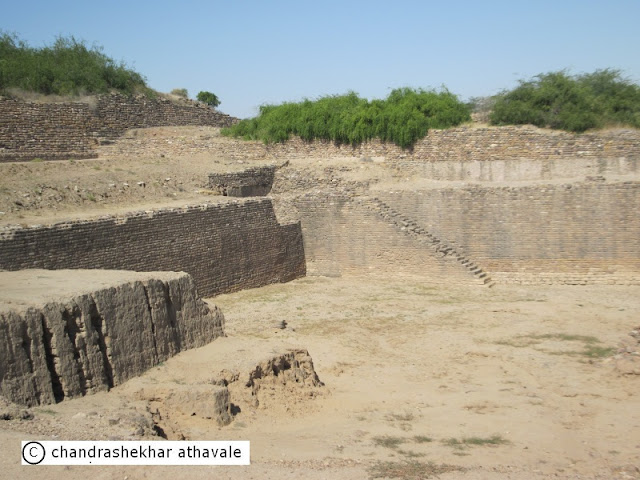 “ The other area in which the Harappans of Dholavira excelled spectacularly pertained to water harvesting with the aids of dams, drain, reservoirs and storm water management which eloquently speak of tremendous engineering skills of the builders. Equally important is the fact that all those features were integrated as part of city planning and were surely for beauty aids too. The Harappans created about sixteen or more reservoirs of varying sizes and designs and arranged them in a series practically on all four sides. The 13 meter of gradient between high and low areas from east to west within the walls was ideally suited for creating cascading reservoirs, which were separated from each other by enormous and broad bunds and yet connected through feeding drains.” 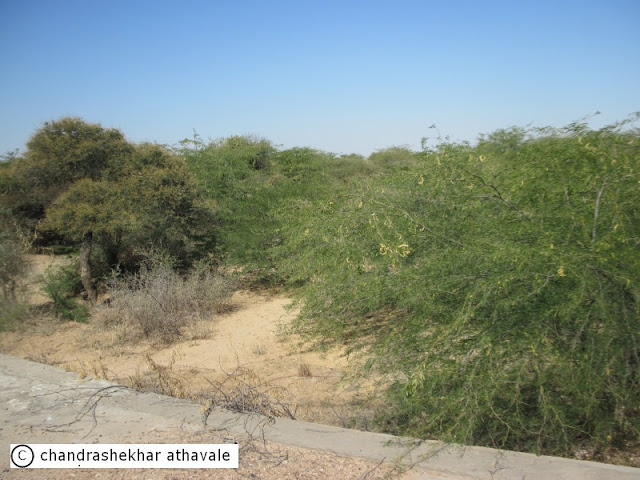 Primary sources for water for Dholavira were 2 monsoon fed seasonal water channels, one flowing in from east and running down to south of the city has been named as 'Manhar' by ASI and the other flowing along north of the city, again named as 'Mansar' by ASI. 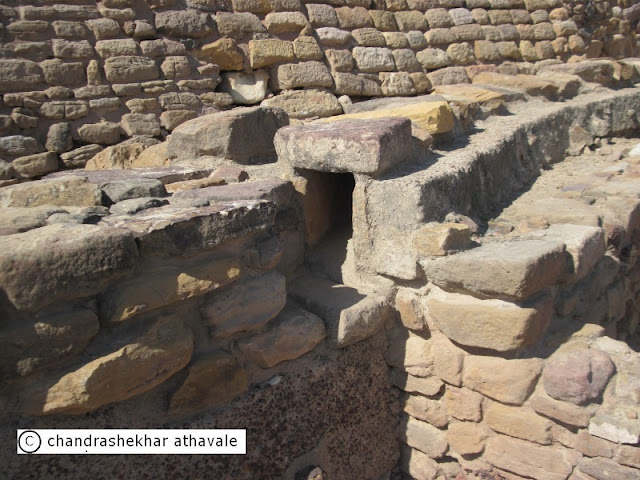 In addition to this, all the rain water that fell on the citadel was collected through a complex drain network. Some of the larger drains were large enough to allow a person to walk through and all the water collected was stored into a tank carved out in the western part of the citadel and were furnished with slopes, steps, cascades, manholes (air ducts / water relief ducts). 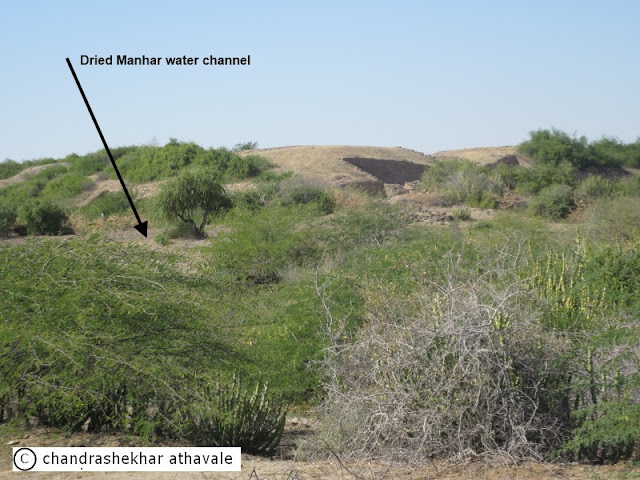 View of east gate with Manhar Channel in foreground

Regarding the storage water tanks, ASI report says and I quote:

“Six of the water tanks, one to east of castle and five of the series to south of it, have been fully or considerably exposed while a few others or other related features are testified in check digs. The tank on the east side was found to be the largest, grandest and best-furnished reservoir of rectangular shape measuring 73.40 m N-S and 29.30 m E-W (ratio 5:2) at the top while above that there should have been a 1 to 1.20 meter high embankment as evidenced at four corners. Its floor was excavated into three levels the deepest of which was 10.60 meter as has been ascertained so far. At three corners, the north-western, north-eastern and south-western, it was provided with a flight of 30 steps each while at the fourth, there should be a waste-weir that still remains to be determined by more excavation. While the embankment served as a broad walkway on two sides, it was found to be a part of a wide causeway connecting it to the entrance appurtenances of the castle and, on the west, it should be flush with a 20 to 22 meter promenade that lay between the castle wall and the reservoir. Inside the water structure there was found a rock cut well with a few rock cut steps and a stone-made enclosure of a later date. One thing is certain that it was accessible to all the city-dwellers whether living in citadel, middle town or lower town or even outsiders. Besides, it was, perhaps, used by all on some social or religious occasions. 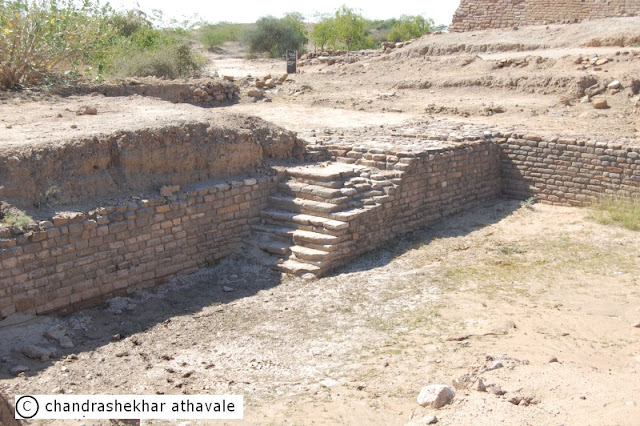 Another five tanks in a series, outside along the south of the citadel have been excavated fully or partly. These are of varying sizes and depth and were cut into soft sedimentary sandy limestone. These five tanks together made two mega-units of somewhat staggered disposition. The first two tanks from the east, form one unit and the rest three tanks form the second unit. Centrally located tank exhibits genuinely, a rock cut architecture of excellence both in beauty and skill and also surely in importance and use. Consisting of both inlying and outlying features, it has a deep basin, an obliquely oriented deeper trough inside, a surrounding free board, two masonry flight of steps, an inlet and another rock cut outlet channel, besides outside features like a wide terrace on the west, a massive levee on the east, a stairway ascending to the covered south gate of the castle, a working platform on the south, a passageway between walls, emanating from the north-eastern stairs. The neatness with what the tank was cut is remarkable. The weaker veins of the rock were scooped out and plugged with superb masonry work. The remaining two rock cut tanks lay further west. All the tanks were interconnected with drain conducting water into each other. The surplus water finally flowed out through a masonry drain into another series of reservoirs excavated further west. ” 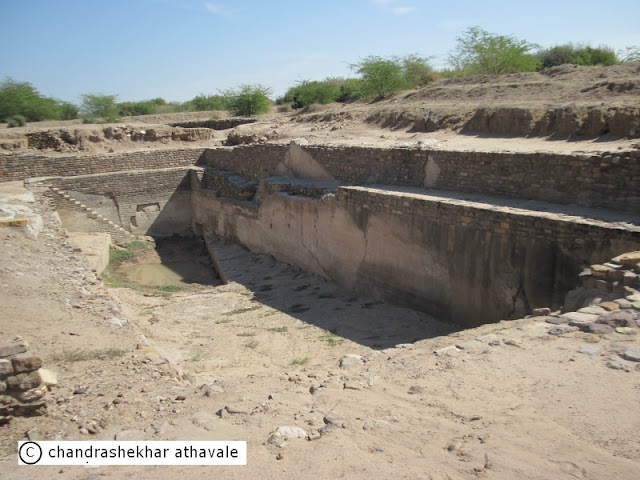 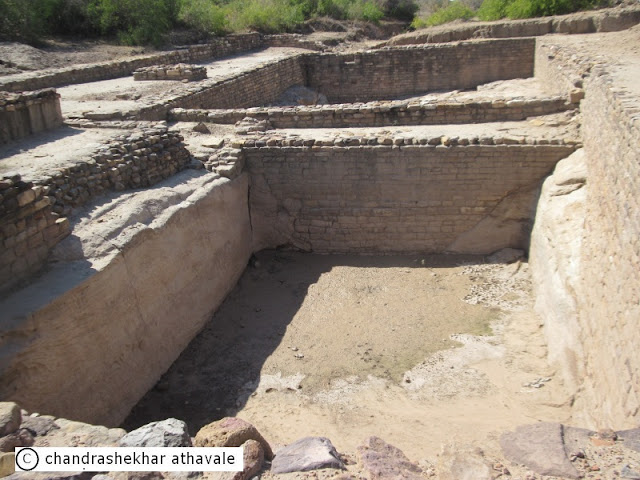 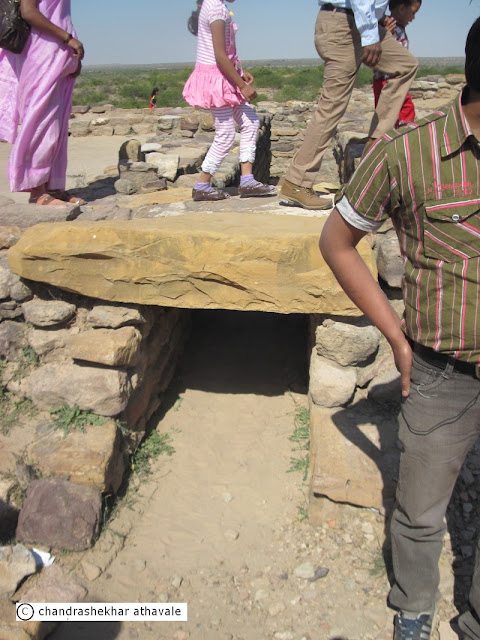 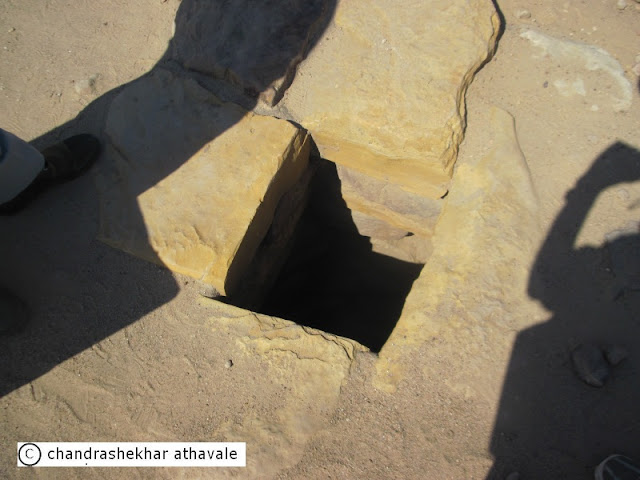 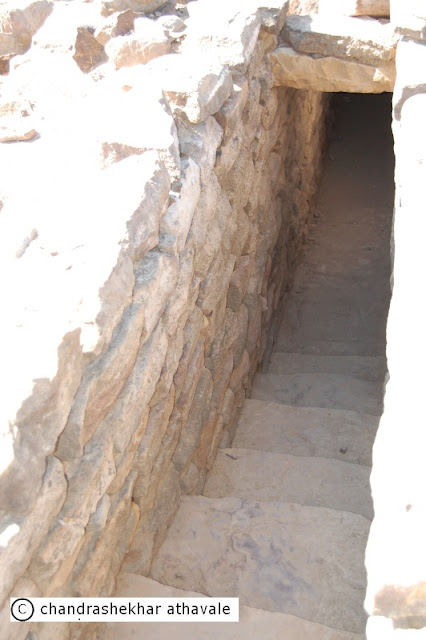 In the northeast corner of the citadel a well was discovered Arrangements were in place to draw out water from this well by using a leather bag attached to a rope, pulled up by bullocks. A horizontal slab of the trough have markings showing the passage of the rope used to draw water from the wall. (This kind of arrangement was in use in India even 40 or 50 years ago.)Water drawn from the well was conducted through a covered channel to feed a nearby tank (4.35 meters X 2.95 meters and with a depth of 3.58 meters. Side walls of the tank were formed by vertically placed stone slabs; the upper part had stone-rubble masonry. The floor was also found to be paved with stone slabs. 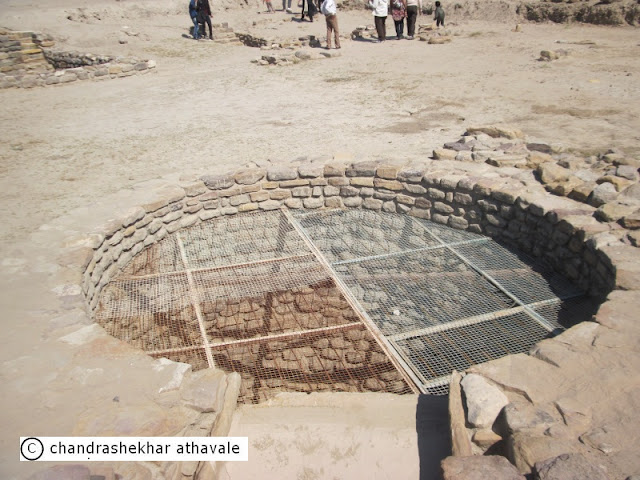 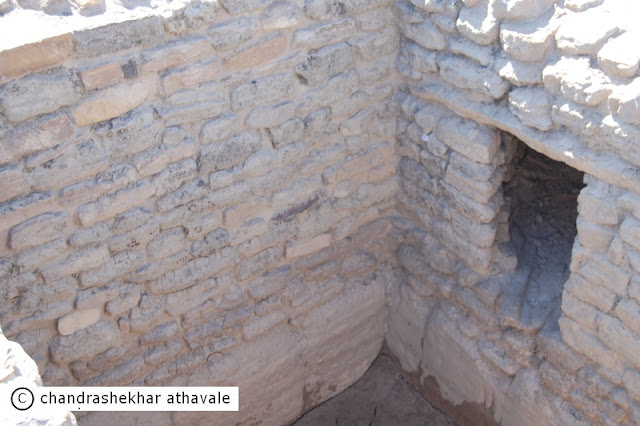 Water inlet duct of the tank, where well water was stored

Dholavira had a well laid out, sewage removal system with toilets, sullage jars (waste water pots) outside many houses, sanitary pits. Drains show a good variety even included cut-stone ones and pottery pipes. 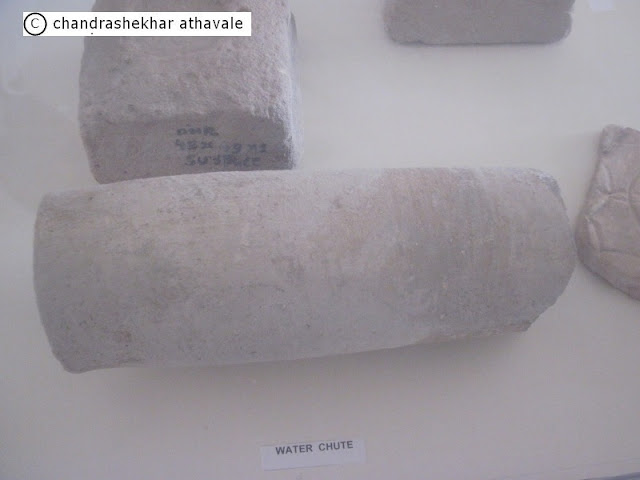 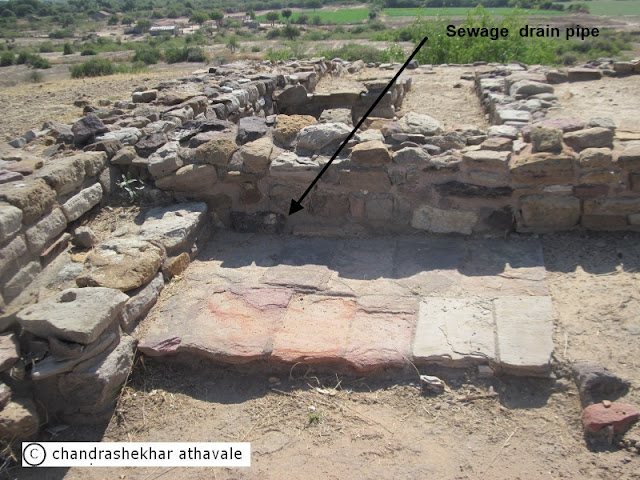 Sewage removal duct in a corner of the house 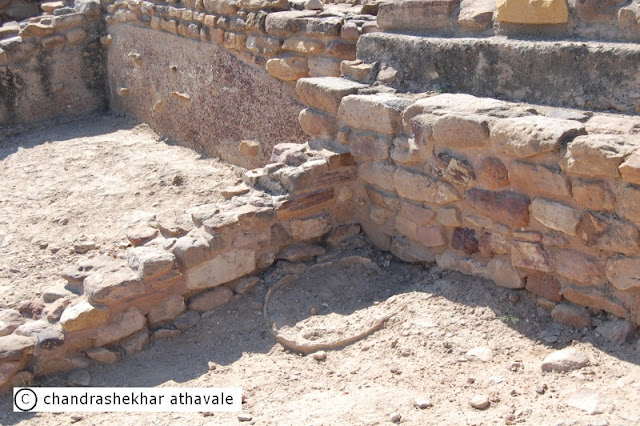 A broken Sullage jar for waste water in a house corner

In my opinion, Dholavira's water supply, rain water harvesting and sewage removal systems are such that even today, many Indian towns would be envious of these. I find it quite difficult to describe these in details and feel that they can be appreciated in the real sense only after a visit.

In the next part, we shall see another amazing aspect of this metropolis.