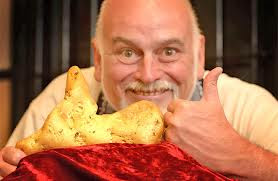 During a visit to the National museum of Natural history of Smithsonian institutes, in Washington DC, I had watched in amazement a small nugget of gold kept in a glass walled chamber, that was found in natural state at Sutter's mill in Northern part of Upper California by J. W. Marshall on January 5, 1848. In fact, discovery of this gold nugget, had started the gold rush in California that brought in more than 300,000 prospectors to the region. Now exactly after 164 years there are bright chances of another gold rush, but this time in Australia's Victoria state. An amateur explorer in Australia prospecting for gold in the town of Ballarat, has actually discovered a gold nugget weighing an astonishing 5.5 kg.

The explorer, whose identity has been kept secret for obvious reasons, was prospecting for gold using a hand-held metal detector, when he heard a faint alert on his detector under a heap of leaf mulch. He scooped up the compost and then started digging. About 60 Cm below ground level, he saw a shining metallic part. The miner thought he had uncovered a gold car part at first, but then to his disbelief, he kept unearthing a bigger and bigger chunk of real gold. The gold nugget is large, measuring at its longest 220 mm, 140 mm wide and 45 mm at its deepest point and weighs 5.5 Kilograms. The prospector took the mega-nugget to the Ballarat Mining Exchange Gold Shop, to confirm his incredible fortune.

If melted down, the "nugget" would be worth about $300,000, but because of its rarity ( It carries an added premium because it is very rare to find a gold nugget that weighs more than a Kilogram.) the value would multiply at least to 500,000 Dollars. 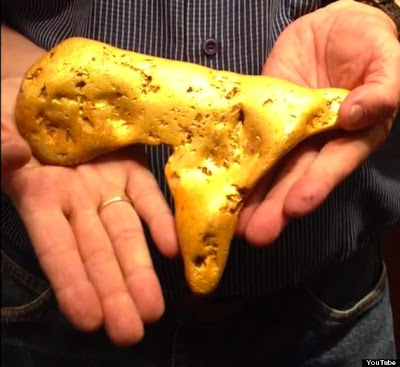 Finding gold nuggets is not something new for this town. Gold was first discovered in Ballarat in 1851, and 20,000 miners had descended on the place by 1853. Just last July, a 3.8 Kg nugget was uncovered in the region. However the local people now hope that this discovery shall bring another gold rush to Ballarat, which shall bring new prosperity to everyone. Prospecting for gold though is not exactly a cheap endeavor. Just a metal detector can easily cost about 6000 Dollars. 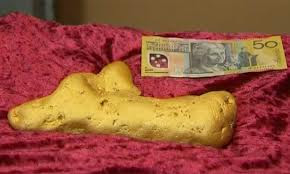 This nugget might be a huge one, but compared to the all time great Holtermann Nugget found in Hill End in New South Wales, Australia, this nugget is a pebble because that nugget found in 1872 weighed as much as 290 Kg. And is considered by many to be the largest single mass of gold ever found.

Ballarat town now hopes that this gold finding would increase the enthusiasm of existing and new prospectors to Ballarat in the central Victorian gold-fields and a new hunt for Victoria's secret gold, shall begin again.