The Surkotada Horse, Part I 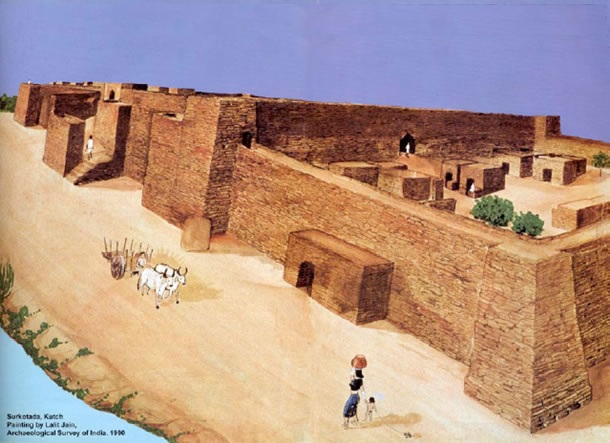 Surkotada is a small place in Kutch district of India's western state of Gujarat. Wikimapia gives the coordinates of this place roughly as 23°37'N 70°50'E , which places it roughly about 120 Km Northeast of Bhuj City and about 22 Km Northeast of town of Rapar. An ancient mound with an height of about 16 to 26 feet stands at this site, surrounded by undulating rising ground and small sandstone hillocks covered with red soil giving this entire region a reddish brown colour. Surrounding landscape is almost barren with patches of scarce vegetation consisting of cactus, small Bhabul and Pilu trees and thorny shrubs. 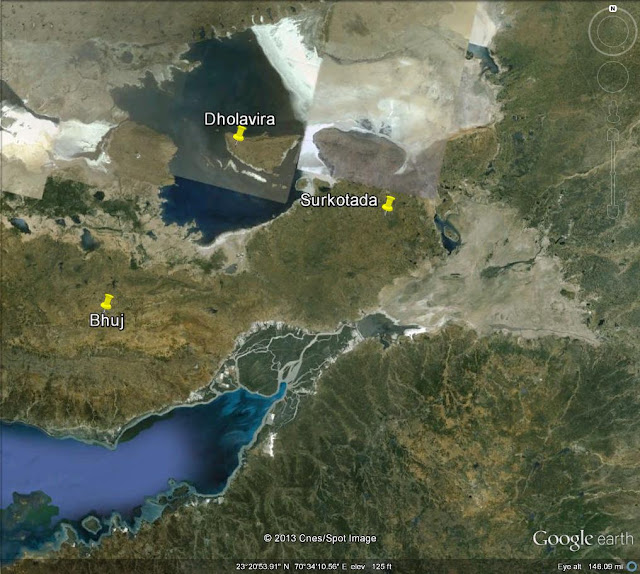 In 1964, Mr. Jagat Pati Joshi of the Archaeological Survey of India, discovered this mound as a possible site of human settlement of pre-historic times. In the ancient days, a small river flowed past the north-eastern side of the site and emptied into the Little Rann. This might have been an important reason for siting the town here. Now this river is only a small seasonal stream. Archaeological survey of India undertook excavation work on this mound first in 1970-71, when it was found that the settlement consisted of a citadel and a lower city adjacent to it. The excavations were continued next year (1971-72), when it was confirmed that the settlement was inhabited in a sequence of three fold cultures labelled as 1A,1B and 1C, roughly belonging to periods: Period 1A (2100 BC - 1950 BC) ,Period1B (1950 BC - 1800 BC) and top layer Period 1C (1800 BC to 1700 BC). From this it was clear that the earliest inhabitants of this settlement were people from Indus civilization, popularly known as Harappans from the Bronze age. 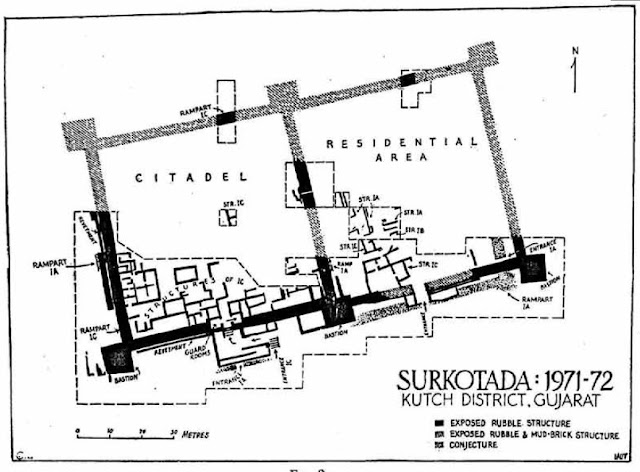 At the close of period IB, a devastating fire had spread all over the settlement indicated by an uneven and thick layer of ash spread throughout the site. However the settlement was continuously in use even there after. In the next sub period or period 1C new people had occupied the settlement. The site also revealed a large number of animal bones from the different sub periods from three categories, firstly Domesticated animals, secondly animals living in vicinity of settlement like hog, rat etc and thirdly animals that were hunted for food like deer.

Surkotada settlement was not unique in any sense. Many such settlements have been found in the Indian sub-continet over years. What made this settlement unique and special was finding the bones of a domesticated animal, found no where else, in any of the excavations carried out so far in the Indus -Ghaggar basins. This animal was Equus caballus Lin or in plain English a Horse. In fact, the archeologist from the team, Mr. A.K.Sharma was very clear, when he reported existence of incisor and molar teeth, various phalanges and other bones of Equus caballus Lin (Horse) along with bones of other horse like animals Equus asinus and Equs hemionus khur (wild asses) in the top layer 1C. He also reported finding of many Equus bones in other layers, which may not have been necessarily that of a horse. 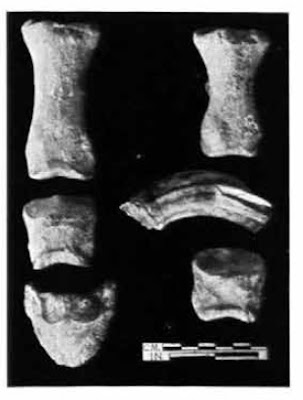 The discovery was so sensational that most of the archeologists, indologists and historians simply refused to believe this. The discovery just made all the grand theories of Aryan invasion of India, propounded by early European historians of Indian sub continent stand on their head. Ever since John Marshall discovered the Indus civilization in 1920's, many European historians firmly believed the Aryan invasion theory. Their argument was as follows:

None of the sites excavated in Indus-Ghaggar river basins so far had come up with any evidence of a domesticated horse or Equus caballus Lin. On the other hand, in the Vedic civilization that overtook the sub continent, sometime between 1700-1500 BCE after demise of Indus civilization, horse is the most revered animal. It was argued that the Aryan invaders must have invaded Indus civilization settlements on the back of of horses around 1500 BCE in a Genghis khan style and used its speed to crushing advantage in order to subdue the native, ox-driven populations. This line of reasoning was regarded as so evident and foolproof that it was taken to be the final word on the issue.

This darling theory of the European historians was now just being proved wrong by an humble archeologist from India, who was claiming that a domesticated horse was already known and was used by Harappans from 2000 BCE onwards, a period much earlier to the supposed arrival of the Aryan warriors.