Even censorship has it's limits 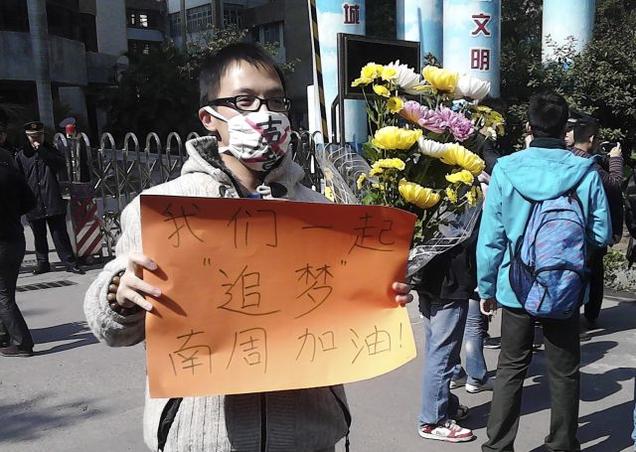 During 60 years of the history of independent India, there has been just one occasion, when Government imprudently thought it fit to impose censorship on the media or newspapers, because at that time, radio and television were any way Government owned and there was no internet. This was the time, when Government under premiership of Mrs. Indira Gandhi, had imposed an emergency on the country. This censorship turned out to be a total disaster for the Government as it was booted out in the next general elections.

During those dismal censorship days, when we all had that feeling of suffocation, while reading the newspapers, few printed words appeared on one morning in The Times of India, Obituaries column. This particular line read as: “ Died, Ms. Dem 'O' Cracy, beloved by all who knew her, may her soul rest in peace.” This one liner was circulated by hundreds of people, who cut it out and carried it in their wallets and circulated it amongst their friends. Almost all of the readers, derived tremendous feeling of vengeance, in reading this and how the Government imposed restrictions were cheated by some really intelligent fellow.

I am reminded of this little incident as I read about a major incident in China, where severe censorship is in place. “Nanfang Zhoumo ” ( The Southern Weekend) is a Guangdong-based newspaper from South China, that has a reputation for hard-hitting and independent journalism (within limits of censorship off course.) Even that is a rarity in China, where the Communist Party maintains strict control over most media outlets. This newspaper has a tradition of issuing strong editorial ‘greetings’ every New Year. The new year editorial for 2013 titled as “ The realization of a dream of constitutionalism in China,” was written to call for political reforms and moving towards creation of a Constitutional government. The provincial propaganda chief, Mr. Tuo Zhen did not like this article and replaced it with a message praising the Communist Party. 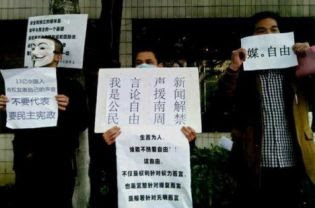 The move outraged the newspaper staff and reporters posted original editorial on the popular Chinese Twitter-equivalent Sina Weibo with a user base of 300 Million Chinese. This triggered a storm of criticism online. On next morning, reporters and supporters of the newspaper gathered outside its office in Guangzhou, with some holding placards calling for freedom of the press. Many well-known Chinese bloggers and actors like actress Yao Chen, fellow actor Chen Kun and blogger writer Han Han issued statements in support of The Southern Weekend. Provincial Government had no choice but to allow gathering of protesters in front of the newspaper's office in Guangzhou on next two days, though the number was kept small. On 5th January 2012, an open letter signed by well-known Chinese academics and lawyers, including Peking University law professor He Weifang and the economist Mao Yushi, called on Guangdong Party Chief Hu Chunhua, who is close to President and outgoing Party Secretary Hu Jintao, to sack Mr. Tuo Zhen, the head of the provincial propaganda department.

By now, central government had taken a firm stand to prevent the censorship row from spreading to other newspapers. A directive was issued to newspapers and web portals, that barred them from reporting on the goings-on in Guangzhou. They were also told to publish an editorial written by the hard-line Communist Party-run Global Times called as "Freedom of the press must have limits". 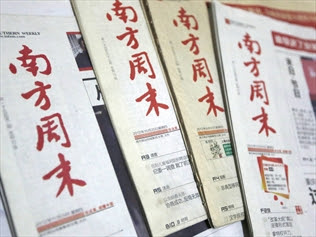 Several web portals on Tuesday, while barred from reporting on the news, carried headlines on their front page that were arranged to spell "Support the Southern Weekend" when the first word of each headline was read together. The Beijing News, initially refused to carry the article and publisher Dai Zigeng told a propaganda official that he was quitting after being threatened with the paper’s closure if it did not print the article, leaving newsroom staff in tears. But things were sorted out and the article was printed next day. It however also gave a subliminal message (like the Dem'O' Cracy obituary in 1975 in India) to it's readers by publishing a culinary tribute to "the porridge of the south" in its lifestyle section. In Chinese, the porridge of the south (nanfang de zhou) sounds similar to the "Southern Weekend" (Nanfang Zhoumo). This tribute said, "It is said that this year is the coldest winter for decades."

The web portals such as Sina, Sohu, Tencent and Netease after publishing the Global times article, posted disclaimers. like “does not mean that our website agrees with its opinion or verifies what it describes” also in an unusual move.

Meanwhile protests continued at Southern weekend office with demonstrators Protesters holding a large banner reading “Democratic China” and had a minor scuffle with a group of pro-government rivals. Things were becoming serious by now. Possibility of an imminent crack down could not be written off.

But in a most surprising turn, Guangdong province’s communist chief, Hu Chunhua, who himself is a rising star in the party, stepped in to mediate in the row instead of issuing harsh measures as usual. The South China Morning Post, which broke the story says that “There’s a verbal agreement in place. Basically it’s back to normal, but we’ll see how the two sides react to each other in the future.” Under this deal, journalists involved in the protests would not be punished and direct pre-publication interference by propaganda authorities would stop.

I do not know whether this backtracking by the officials is to be considered as a small victory for the journalists as some reports claim. After all, things are just returning to normal or back to censorship. But this episode has come out with a surprise message that even censorship has it's own limits.