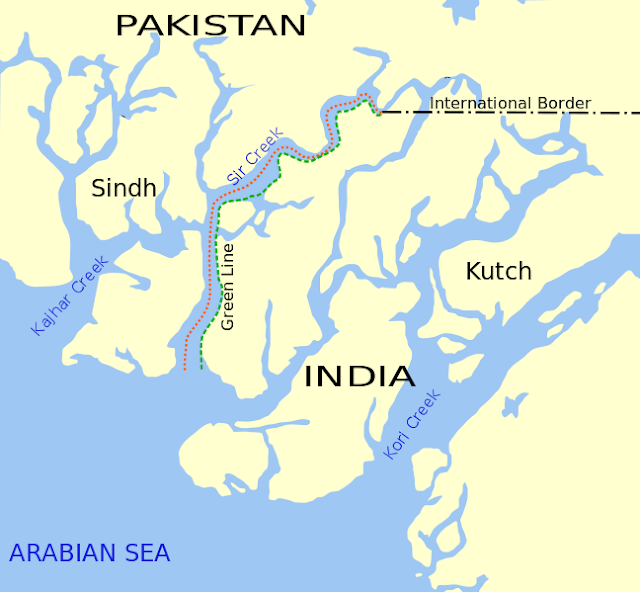 India and Pakistan share an international boundary stretching over 3000 Km length. Most of this border is well defined, except for Kashmir and a small part of the border, where it joins the Arabian sea. This small part of the border, which is only 96 Km long has been a long dispute between India and Pakistan. What is surprising is that this disputed part of the border is not even an arbitrary line drawn by some mediator or an arbitrator but lies along a definite geographical feature: a creek that opens into Arabian sea. This creek divides the Kutch region of the Indian state of Gujarat with the Sindh province of Pakistan. It is located at approximately 23°58′N 68°48′E. Wikipedia says that it is known locally as 'Baan Ganga'. However I failed to find any corroborations for the name.

In 1924, the then British Government installed mid channel markers along entire Sir Creek as boundary markers between Sindh region under Bombay presidency and princely state of Kutch ruled by Prince Rao Maharaj. Pakistan does not recognize these mid channel markers and says that the border should be along the east or Indian side bank of the creek, whereas India wants the original 1924 markers as International boundary. 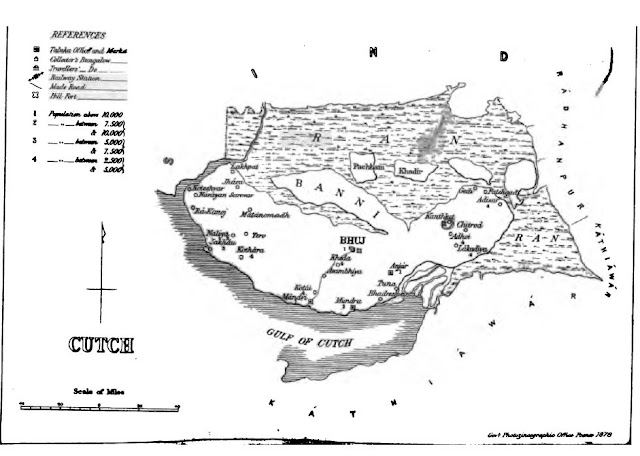 Many people wonder as to why such a small waterway has gained so much of importance and why no one wants to budge from their positions. To find answers to these questions, we need to go into little bit of history and find out exactly the reasons for fixing the boundary at Sir Creek in the first place. Let us first begin with the eastern part of the boundary between Kutch and Sindh. A look at the map and the terrain makes it clear that the this entire boundary runs along the shore line of a vast inland lake of marshy land and salty water known as Rann. Even an 1878 map shows this boundary very clearly and without any ambiguity.

Towards the western part, a town called “Lakhapat” is located on the Kutch side of this Rann. Just north of this town, a river known as “Kori” continued to flow as late as 1875, though intermittently going through cycles of fresh water flows and marshlands. Ali Bandar town (In Pakistan now) was situated on the bank of this river and from here, the river flowed southwards towards Lakhpat.

This Kori river is of great historic significance as it was known as east mouth of Indus. In fact, during times of Alexander the great (325 BC) and Ptolemy (150 AD), it was called “Lonibare” and was one of the main mouths of the Indus river. Water wars began between people of Kutch and Sindh over sharing the Kori water as early as 1764, when Kutch army was defeated. In 1764 and again in 1802 great dams were built on Kori making the downwards river bed completely dry. This converted the once fertile rice fields of Lakhpat into grazing grounds.

In 1819 a huge earthquake struck Lakhpat. This completely destroyed the so called eastern mouth of the Indus or the Kori river into marshy land filled with ups and downs. As an aftermath, a Tsunami wave struck Kori creek. 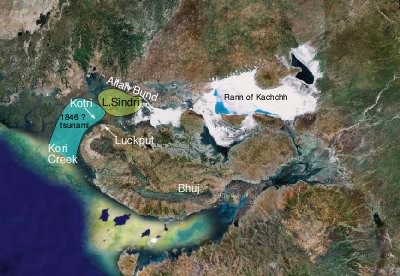 Quarterly journal of Geological society 2, 103, (1846 ) mentions a letter by one Mrs. Derinzy sent to one Captain Nelson. This letter describes the Tsunami in Kori river.

"One of Capt. McMurdo's guides was travelling on foot to him from Bhooj. The day he reached Luckput there were shocks of an earthquake, which shook down part of the walls of the fort and some lives were lost. At the same time as the shock the sea rolled up the Koree (the eastern) mouth of the Indus, overflowing the country as far westward as the Goongra river (a distance of twenty English miles), northward as far as a little north of Veyre (forty miles from the mouth of the Koree), and eastward to the Sindree Lake. The guide was detained six days (from June 19th to 25th during which time sixty-six shocks were counted. He then got across to Kotree, of which only a few small buildings on a bit of ground remain. Most of the habitations throughout the district must have been swept away, the best houses in Scinde being built of sun-dried bricks, and whole villages consisting only of huts made of a few crooked poles and reed mats. The guide travelled twenty miles through water on a camel, the water up to the beasts body. Of Lak nothing was above water but a Fakeer's pole (the flagstaff always erected by the tomb of some holy man); and of Veyre (Location of this place is unknown now) and other villages only the remains of a few houses were to be seen. There are said to be generally two earthquakes every year at Luckput. The Sindree Lake has of late years become a salt marsh." 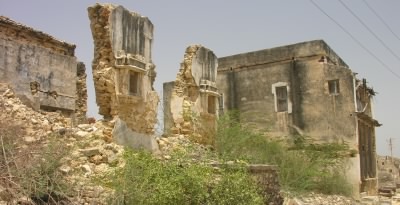 As a result of earthquake, entire Sindh shoreline north of Rann also rose up like a bund. This is known as “Allah's Bund” or God's Bund. This God's bund effectively diverted the eastern mouth of the Indus forever. 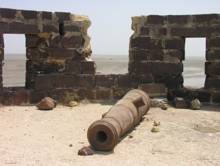 Ever since then, depending upon the floods in Indus basin, the Kori basin gets filled with sea water and fresh water or remains marshy and dry and has almost become a part of Rann, uncertain and undefinable.

History of Kori river, since earth quake of 1819 makes a fascinating reading. I quote from Imperial Gazetteer ( with places of names changed)

“ After 1819, at Lakhpat, where it used to be fordable, the river bed became eighteen feet deep. About sixteen miles further up, from two to six miles of the bed was raised and beyond that the level of Rann fell forming a basin of twelve feet deep. Beyond that bed of river rose up to Ali Bandar (What is named as Allah's Bund). At the same time a great wave (a Tsunami) rushed up the river and filled the basin with salt water. For eight years the channel of the river was closed except during season of floods its bed was nearly dry. In 1826, upper Indus burst its banks, overspread the desert, and clearing every dam before it, burst through Ali Bandar, filled the Shakoor lake with fresh water and sweeping the silt, so cleared the Kori bed that boats of 100 tons could pass from sea to Lakhpat town. For three years, the Kori continued to come down in so large a stream that it was open for trading as far as Amirkot. Meanwhile, Sindhi's were building their dams and in 1834 the Kori stream was almost stopped. In 1838, except during rains, the channel was dry. For next 36 years (1839-1874) silt kept gathering in the bed of the river below Ali Bandar. In 1856, there was water enough for boats to go up to Shakoor lake from mouth of river. In 1868, a boat could not pass further up than Lakhpat. In 1874 there was another flood on the Indus, a large body of water run through the Ali Bandar and filled Shakoor lake.” 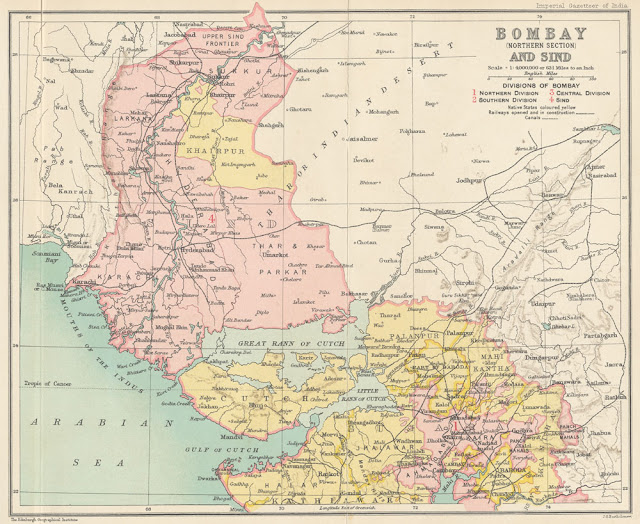 Readers may be wondering as to why I have been talking about Kori river at such a great length, when the subject of this article was the Sir Creek. For that, let us now turn to a map published in 1908 by Imperial Gazetteer. This map outlines the borders of Kutch state and Sindh Province. This border runs from east to west more or less along the present international boundary between India and Pakistan and then turns down sharply south along the shores of Rann or the salt water lake to Kori creek just north of Lakhpat town. This map confirms the old traditional boundary between Kutch and Sindh, but does not take into consideration the changes that took place in the geography after 1819. The new border alignment was finalized between Government of Kutch and Sindh, first in 1914 and again in 1924-25. These new agreements, took into consideration the geography of the region, which had changed completely. The entire area west of Kori river bed had since changed into uninhabited marshlands without any geographical features. During the monsoon season between June and September, the creek flooded its banks and enveloped the low-lying salty mudflats around it. Later it would again become large tracts of Marshy lands or mudflats. 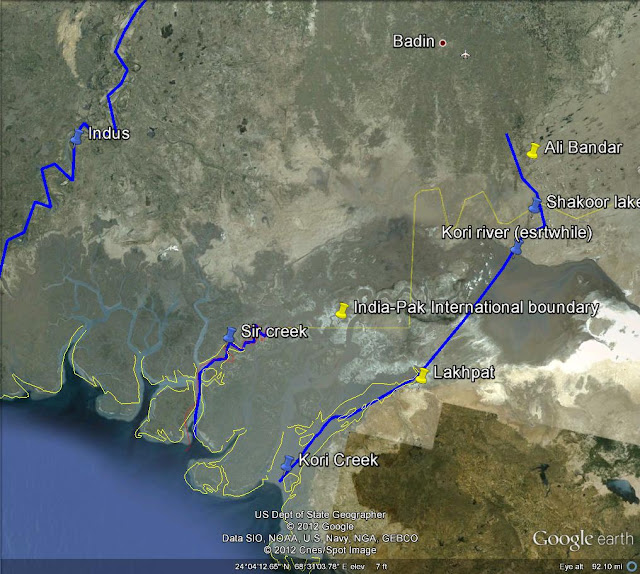 I think, that it would be obvious to readers, that in such kind of geographical landscape, which keeps changing all the time, how can a border be fixed? The only recourse was to fix it along the nearest geographical feature that was stable and this feature was a large body of water now known as Sir Creek.

Sir Creek is navigable in high tide, and fishing trawlers use it to go out to sea. In such a case it would be obvious that, placing mid channel markers to mark the boundary between Princely state of Kutch and British controlled Sindh province was a well thought out and the correct approach, which was implemented in 1924.

Pakistan perhaps have their own reasons like control over the exclusive economic zone in the Arabian sea that can extend up to 200 Nautical miles and possibility of finding Hydrocarbons and their commercial exploitation, for not to agree to mid channel markers. However one thing remains clear to me, Sir Creek is the only stable and recognizable water body in that area and it should be shared by both countries by treating mid channel markers as international boundary.