Living under a shadow 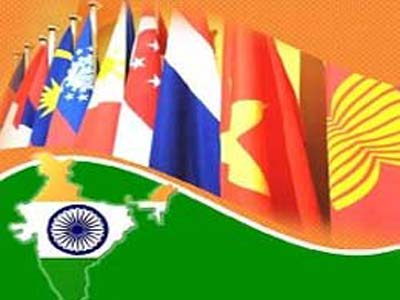 If I have to comment about the India-ASEAN summit that took place on 20-21st December 2012, in New Delhi, I can easily say without any doubt, that it is a summit clearly under a shadow. No ASEAN leader mentioned it in his speech, but it is obvious that everyone was acutely aware of the elephant in the room. In speeches, the Philippines and Vietnam referred to tensions in their region. Philippines Vice President Jejomar Binay said “At this time of rising concerns about maritime issues, the need to maintain a high level of maritime security and freedom of navigation offers us... an opportunity for enhanced cooperation.” Indonesian President Susilo Bambang Yudhoyono was perhaps more explicit when he told the summit that closer maritime cooperation with India was needed because 70 percent of the world’s traffic in petroleum products passes through the Indian Ocean from the Middle East to East Asia. He said further: “While the center of the global economy is shifting eastward, the Indian and Pacific Oceans have been and will become even more important in providing the vital sea routes for trade and commerce.” 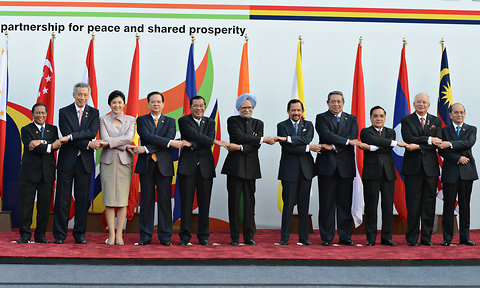 India is hosting this ASEAN-India Commemorative Summit in New Delhi to mark the 20th anniversary of the ASEAN-India dialogue partnership and the 10th anniversary of ASEAN-India Summit-level meetings. The theme of the summit is 'ASEAN-India Partnership for Peace and Shared Prosperity'. And it aims at strengthening ties across diverse areas like trade, energy, security and cultural connectivity. The prime ministers of Singapore, Cambodia, Malaysia and Vietnam, the presidents of Myanmar and Indonesian, and the vice president of the Philippines are attending the summit along with representatives of Thailand, Laos, and Brunei.

Someone may ask; why this sudden anxiety about the maritime security? The answer is not too difficult to find. The South China Sea has become Asia’s biggest potential military flashpoint. The core of the problem is the possibility of huge oil reserves in the region, which are being explored in their territorial waters by Vietnam and the Philippines at present. China claims a huge looping area out of the South China Sea as its own. This claim conflicts directly against sovereignty claims by Vietnam and the Philippines as well as Malaysia, Brunei and Taiwan. In November 2012, China announced a plan to board and search ships that illegally enter what it considers its territory in the South China Sea. A dangerous proposition that could lead to naval clashes.

China also managed to breach the unity of ASEAN over this issue by using Cambodia, which was promised a largesse including a $100 million loan to set up Cambodia's largest cement plant. As a result, the ASEAN summit ended in acrimony in November 2012 over China’s assertiveness in the South China Sea, with its leaders failing to agree on a concluding joint statement.

India is obviously relishing this moment, as countries of South East Asia are looking to India now for maritime security. India has no territorial claim in the region, yet it has interests. It is exploring for oil and gas with Vietnam in an area contested by China. Also there is also a plan to ship liquefied natural gas from Russia through the Malacca Straits in future. It is interesting to note that few weeks ago, India’s navy chief made a statement that he was ready to deploy vessels to the South China Sea to protect exploration interests there, if needed. 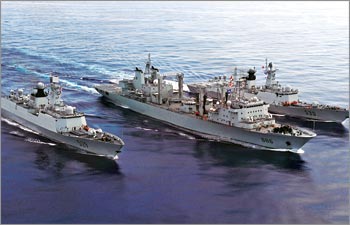 In the vision statement agreed at this New Delhi summit, India and the 10-member Association of Southeast Asian Nations (ASEAN) have set their sights on a new “strategic partnership” that would bring closer political, security and economic cooperation, with special importance for the need for freedom of navigation, a contentious issue because of competing claims with Beijing over parts of the South China Sea.

It is obvious that ASEAN considers the presence of naval ships of few major powers in south China sea as a guarantee for their safety. They have already convinced US, which has started stationing a larger force of marines in south east Asia. Presence of India in Southeast Asia would provide them greater additional safety against being dominated by China.

India has great plans for improving connectivity with south east Asia. It is pushing for quick implementation of the India-Myanmar-Thailand Trilateral Highway and its extension to Laos and Cambodia. It is also planning to launch a second route that would run from India through Myanmar, Laos and Cambodia to Vietnam. These plans may take time to fructify. Since annual trade between ASEAN and India has nearly doubled in four years and India’s growing economic clout makes it appealing as a balance to other Asian powers. The emphasis on maritime security gains importance.