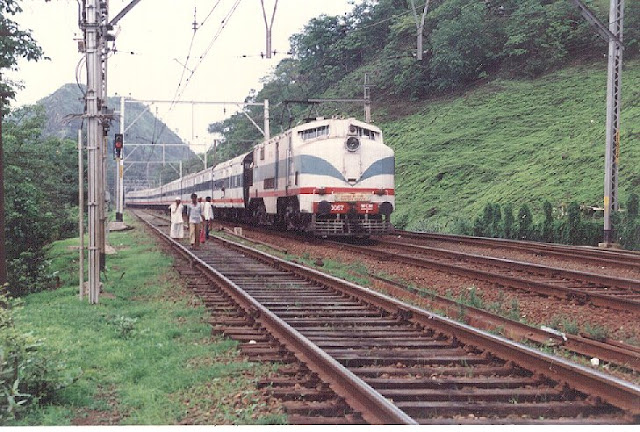 Till about a decade ago, most of us would make the travel between Mumbai and my home town Pune, by a train. Firstly there was no expressway then and travelling on overcrowded highway meant usually long and uncertain delays. The train travel also used to be pleasant and comfortable. There used to be no air conditioning in the coaches and whether travelling by first or by second class, I would keep the windows open and let in strong breeze to freshen my body and soul. At two places, between Khandala and Karjat stations, the train would be stopped for brake testing, as this particular portion of the journey was through entirely hilly area. At both these places, when the train stopped, a swarm of dark coloured young tribal women and girls with sharp features and wearing their typical saris would appear near the windows and try to sell fruits and berries from the jungle. Everyone bought these sweetish sour jungle fruits from these tribal women and enjoyed the taste. A Mumbai-Pune journey was not complete without eating these raw and sour testing fruits.

For most of the urban people like me, our only contact with these tribal women ever, was and is, buying these jungle fruits from them when the train stopped. Recently I came across some information about these tribal women known as 'Katkari' and it was a revelation for me that these tribal women are forced to spend a horrible lifetime due to three basic deficiencies; poverty, illiteracy and backwardness. When Government sponsored advertisements keep on telling us how good medical help is now available in every nook and corner of the country, for these tribal women living just 70 or 80 Km from crowded metropolises like Mumbai or Pune, the medical help available is so scanty and poor that it would appear that they are actually living in thirteenth or fourteenth century instead of twenty first century.

'Katkari' people are officially identified as tribal people from districts of 'Thane' and 'Raigad' in the state of Maharashtra in India. In 1975, Government of India, recognized these people as the original inhabitants of the Western ghat jungles, who are uneducated, non agricultural people living off the jungles. Because of this recognition, 'Katkari' people came under the purview of the Tribal welfare act and all the benefits and subsidies available under this act accrued or became available to them. In spite of this, these people continue to remain uncared and neglected. It is estimated that there are about two hundred thousand 'Katkari' people residing in the Western Ghat jungles.

Two social service organizations, one from Pune known as “ Masoom” and another from Satara town known as “ Shramajiveee Janata Sahaayak Mandal” have recently carried out a survey of 'Katkari' women. The results of this survey are not only shocking but mind disturbing. Some of the observations of this survey are as follows.

The situation is now becoming serious and critical with the result that the total number of 'Katkari' tribals has actually started dwindling. Most of the 'Katkari' women have a severe anemic condition due to malnutrition. This naturally affects their pregnancy and motherhood badly. Due to lack of hospitals or trained medical staff the percentage of infantile deaths is very high.

In general, these 'Katkari' girls, because of their illiteracy and ignorance, have scanty knowledge of proper information about personal health and diseases in the first place. When dark age social customs like child marriages and early pregnancy are imposed on these unfortunate girls, their health gets so badly affected that most of the young women appear sickly and weak all the time.

These two social services institutions have started two projects for improving health of young mothers, Girls and babies in two district sub divisions of Poladpur and Mahad. However the reach of these social problems is so vast that such small efforts might not make much of an impact. What is required are projects on a vast scale. Only then, there is some chance for improvement in lives of these unfortunate young females.