Simple test for Virginity or at least for Chastity 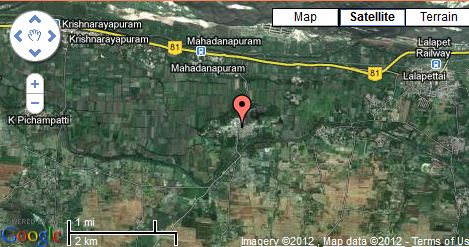 Do you wish to prove that you are a virgin or you have no extra-marital relations? Well! There is a simple test. All you need is a strong skull or scalp on your head and have guts to get a dry coconut cracked on your head. Even if you do not have a clean slate, this cracked coconut would absolve you from all sins and bad things!
You may not believe in this! But, two communities, known as ‘kurumbas’ and ‘24 Manai Telegu Chettiars’, from Tamil Nadu, Karnataka and Andhra states of India certainly believe in this simple test. They have their chastity proving coconut breaking rituals, at Mahalakshmiamman Temple in Mettumahadanapuram village in Karur District of Tamilnadu, India, at the time of their yearly Adi festival. 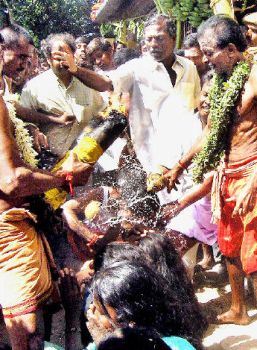 During this festival, 750 men and women got at least one coconut cracked on their head, by the head priest of the temple, Shree. Periyaswami, to prove that they have no extra-marital relations. Shree. Periyaswami has been performing this ritual every year for last 23 years and during the ritual he wears footwear with nails.
All kinds of emergency medical services and ambulances are kept ready near the temple and there is also heavy police presence. However, no one uses these services. Many of the disciples would have wounds but they manage just by applying turmeric powder and ash to the wounds. There are number of women in the crowd of disciples. They have no fear to get the coconuts cracked on their heads. The coconuts used in the ritual are normally completely cleaned and have a layer of turmeric powder applied on the surface.
Promiscuity is a major problem in the Kurumba community. This could be because of disproportionate number of women (2/3rds are women) in the community. This may be the reason, why people from this community are encouraged to re state their honour and cleanness by this method. Government also sees this as a measure that helps eradication of AIDS drive and therefore actually encourages it.
What a simple (?) way to re state your honour?