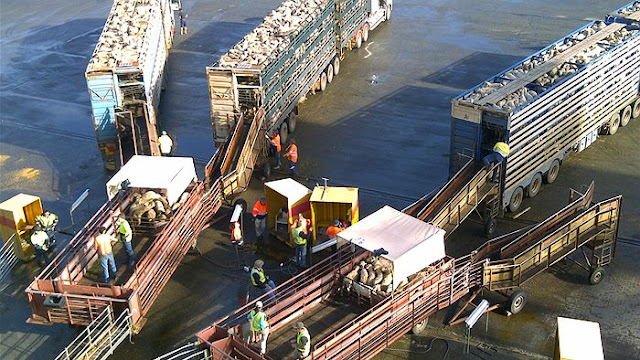 One of the major items on Australia's export bill happens to be livestock exports. Australian livestock breeders ship every year hundreds of thousands of sheep, goats and cattle to many countries around the world for meat or in other words for slaughtering. The total Australian livestock exports are worth US$ 1 Billion and employees thousands of people in Australia. Because of the volumes, much of the live stock handling has been mechanised. Livestock are brought up to ships in narrow width barges and are then transported on big ships almost on a conveyor belt for sailing to other countries.

An Australian exporting company called 'Wellard' had sent one such ship carrying about 21000 Australian sheep to Bahrain, a small but affluent island country in middle east. The port authorities of Bahrain rejected this consignment of sheep from Australia for disease concerns and refused to unload the livestock on land. 'Wellard' then offered this consignment to Pakistan. It is not known, what were the terms and conditions of the offer and whether Pakistanis were told about the rejection of the consignment by Bahrain. Whatever transpired between 'Wellard', Pakistan agricultural department and Australian agricultural department, who had issued the export license in the first place, Pakistan issued an import license to 'Wellard' and the ship was diverted to port of Karachi in Pakistan. 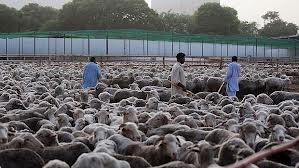 After the sheep reached the Karachi port, the livestock cargo was unloaded on land. Before sending the sheep to abattoirs, Pakistan authorities decided to check the livestock health. The sheep tested positive for salmonella and Actinomyces bacteria and were considered as unsafe for human consumption. Alarmed by the prospects of a huge loss on the consignment, exporters sent the samples from the sheep to a British laboratory and came back with clean reports claiming that the meat for human consumption. Municipal officials in Karachi however rejected the tests by the British laboratory. Pakistan livestock officials then ordered that the entire lot of 21000 sheep be culled over disease concerns. 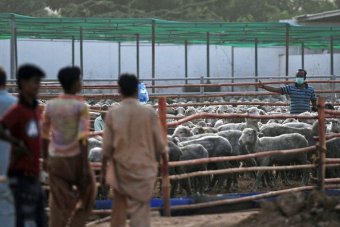 Sheep exporter 'Wellard' says that the sheep were kept at a farm, some 50 Kilometers south-west of Karachi port in Bin Qaisim town, in a fenced compound under control of the company guards. Pakistani police with semi-automatic weapons forced their employees away from the compound where the sheep were being held. 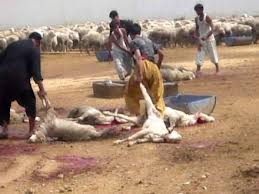 Pakistani authorities carried out the culling of the entire lot of sheep in a very brutal fashion by beating, stabbing and then throwing the sheep into ditches to be buried alive. Graphic footage of the slaughter was aired by ABC’s Four Corners program in Australia on Monday, 5th November 2012, which showed images of a man sawing at a sheep’s neck before throwing it into a bloody trench and other sheep being bulldozed into the pit after having been killed in October. There were media reports that some of the sheep seen in the footage were still breathing. 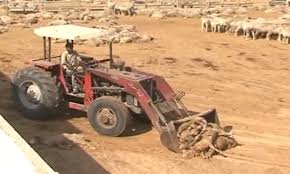 ABC's footage has raised a huge controversy in Australia with everyone indulging in angry condemnation of the treatment to Australian sheep. Australia’s National Farmers Federation says that “decisive action” has been taken to temporarily suspend exports of sheep to Pakistan and Bahrain while investigations were carried out. Australia's Agriculture Minister Joe Ludwig calls the slaughter “appalling” and his department disputed that the sheep were unhealthy. He said “We do not know the reasoning behind the Pakistan authority’s decision to cull the sheep in Pakistan or their choice of the method used.” Australian exporters are rather worried about this ban because a lot of 3000 breeder cows from Victoria were on their way to Pakistan and there were no guarantees they might not meet a similar fate.

Many feel that export of livestock should be banned to Pakistan and middle east but farming lobby group does not agree. They have come out with a kind of funny statement on the issue, which says that Australia was a world leader in animal treatment in exports and banning the trade would see welfare standards fall. They say “If Australia was to stop exporting livestock, global animal welfare standards would unquestionably decline.” Even Australian Prime Minister Julia Gillard has now demanded that Pakistan investigate and explain the brutal killing of 21,000 Australian sheep in Karachi.

Many Australians feel that livestock trade should be banned and only frozen meat should be allowed to be exported. Farmers Unions do not agree with this. There is a thinking that Australian sheep have a right to die with dignity and even if they are sent abroad for slaughter it should be done the way Australians think as dignified.

It seems that Australians want to tell the world. “Its O.K. to kill! We would provide animals for your slaughterhouses. But you must kill the animals, the way we tell you, because Australian animals must die with dignity.”