E-Governance: a small town from India shows the way

Few years back, I decided to renovate my house as it needed urgent repairs. I contacted an architect friend of mine and explained to him my requirements. He worked on my wants and produced a plan, which was acceptable to me. Sadly, this was the easiest part of the entire exercise, as we still had to undergo a lengthy procedure of getting approval of the Municipal corporation of my home town, Pune, for our proposed plan of changes.

Pune Municipal corporation has a very nice web site, which proudly claims its achievements in e-Governance. I felt quite heartened by this and told my architect friend that we can just submit our plans to the corporation on the net. However, my architect friend, who was in the knowledge of things, said that e-governance talk is just blah-blah! All the procedures in the corporation remain same. Only difference is that in addition to a plethora of forms, affidavits and paper drawings of plans, we also need to submit a CD of a prescribed software giving same details that are given in other documents. I felt very discouraged but there was really no choice.

In India, many Government and Semi Government organizations like Passport office, land records office, etc. talk a lot about e-governance. But in almost all cases, it is just a lip service paid to fulfill an internal Government order. With this kind of backdrop in my mind, it was rather hard for me to believe that a small town in UttarPradesh state of India, has actually managed to achieve full e-governance that is 100 % transparent, just with 3 computers and a scanner and that too unofficially, at the initiative of Mr. Alok Kumar Singh, executive officer of the local town area committee. The town has a web portal, which is not even official or financed from Town committee funds.

Ashrafpur Kichaucha, is a small town of 15,865 people in Ambedkar Nagar district of Uttar Pradesh. It is famous for the 625-year-old shrine of Sufi saint Hazrat Makhdoom Shah Ashrafi. Mr. Alok Kumar Singh took charge of the administration of this town as Executive officer, Local town area committee in 2006. At his initiative, a web portal has been created that could be considered as ultimate in e-governance. What is also important is the fact that it has been created by him without any financial help from the government or any other agency, using just three computers and a scanner. 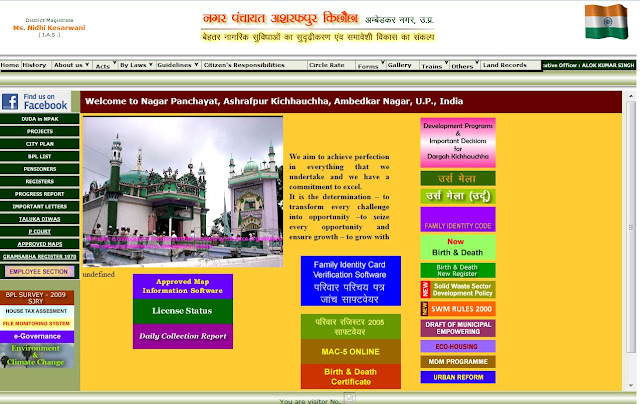 Web portal (www.npakmakdoom.com) of Asharafpur Kichaucha town municipal body, known as ‘Nagar panchayat Ashraf Kichaucha,’ provides complete access to any of its residents to data like, Birth and death records of every single citizen, records of each of the 39 types of licences issued by the civic body, all building plans, all official files, every payment that a citizen makes to the local body and few other things. Explaining the need for such a portal, Executive officer Alok Singh says that “When I joined the town area office as Executive Officer in June 2006, I used to see illiterate, helpless people running from pillar to post even to get their papers verified. There was corruption, they could not read the papers which were handed to them. So I planned to put in place a system so that they did not have to suffer.”

Town committee's web portal has changed all that. It not only displays details of licenses to run shops, liquor outlets, passenger vehicles, restaurants, or vendor registration but also the lists of every payment that a citizen makes to the local body.

A complete listing of records such as land mutations, birth and death, family disputes or succession, can be seen by the residents and they can take print outs. These records are constantly updated, eliminating any scope concealing any of the records. The town people also can see uploaded details such as the list of people who are below poverty line, works done by the district urban development agency, pensioners’ records, town plans, advertisement by-laws, important orders and even the register of local municipal body from the days before 1984 when the town had only a 'Gram Sabha” or village committee. 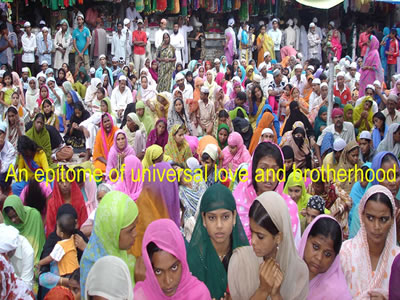 The town committee felt the need to issue numbered family identification cards, to the head of each resident family as at any given time there are at least 40,000 outsiders present in the town, because of the shrine. By entering the card number on the link given on the town web portal, full details of the family, such as address, names of members, their sex, date of birth can be obtained easily. This card has proven to be a good enough identification proof and local police accepts it if anyone produces it at the time of any checking, though Government agencies may not accept it as valid identification proof. 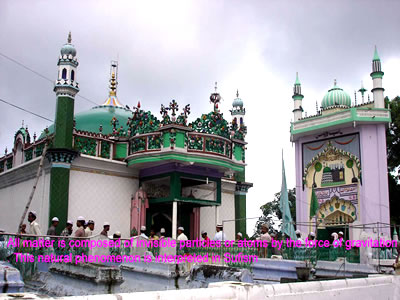 The portal also has information about the town’s dargah, along with its history and pictures. Any resident can get an access to the maps provided on the portal to find out addresses and other such details.

After launching the portal municipal committee observed that there was a greater willingness on parts of the residents to submit their building plans to the town committee for approval. In 2006 hardly any building map was submitted to the town committee for approval. Even if someone wanted to submit the plans, the municipal staff was reluctant to give permissions to anyone. Now everyone makes it a point to submit building plans, even if they decide to add one room to their house for the simple reason that now there is a record that can be seen by anyone. Besides compliance, it is also generating additional income for the town committee. The revenue of the town area committee has gone up from 0.675 Million Rupees in 2009 to 3.581 Million Rupees in 2012.

The District Magistrate of Ambedkar Nagar District of Uttar Pradesh state, Mr. Nidhi Kesarwani praises Mr. Alok Singh's pioneering efforts and hopes that in future the web portal is developed further. He is also trying to get Government funding for the project. Mr. Alok Singh also wants that the web portal be treated as an official portal, which would add to its power, potential and usefulness to the residents.

This is absolutely fantastic effort by a Government officer, who is not even part of the elite Indian Administration service but a state cadre official. Emulating and extending Mr. Alok Singh's good work, first to state level and then to national level could bring in tremendous improvement in functioning of municipal bodies all over the country; a much desired change.