A victim of religious traditionalism 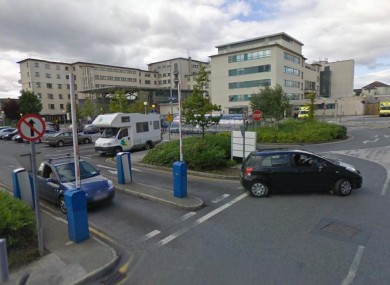 Would you ever believe that in the year 2012, a miscarrying, 31 year old woman, suffering from blood poisoning, would be refused a quick termination of her pregnancy and would be allowed to die in a modern hospital in one of the developed countries of the west? Well! This is what exactly happened to a 17 weeks pregnant Indian Lady, who herself was a dentist, in Galway, Western Ireland.

About 50 years back, films or novels produced or written in India, often had a melodramatic scene, where a Doctor would ask the husband of a pregnant woman in pain, whom he should save? The mother or the Child? And remembering his true love for his dear wife, the husband would always tell the Doctor to save the mother. Remember that in India of those days, abortions were illegal, except for medical emergencies. Sometime later, I had asked a Doctor friend of mine, the truth about this common melodramatic scene from the novels or films, when he had told me that these kind of melodramatic scenes were all figments of imagination. Doctors would always ensure that the pregnant mother's safety would be never compromised and no such option would be ever given to the husband at all. I am mentioning this fact here to just highlight the fact that even 50 years back, in an undeveloped country like India, no sane Doctor would have allowed a 31 year old lady, to get blood poisoned, because of miscarriage. Yet it was allowed to happen in Ireland of 2012, because some ancient law passed in 1861 says that “it is a crime to procure a miscarriage."

Predominantly Catholic, Ireland's constitution officially bans abortion, but a 1992 Supreme Court ruling has legalized it for situations when the woman's life is at risk from continuing the pregnancy. Five governments since have refused to pass a law resolving the confusion, leaving Irish hospitals to decide on their own. Hospitals have been most reluctant to terminate pregnancies except in the most obviously life-threatening circumstances.

Mrs. Savita and her husband Praveen Hallappanavar, were a normal happy couple, full of life and were expecting their first child. They were living in Galway since 2008. Praveen works in a company that manufactures sophisticated medical equipment, and Savita was a dentist. 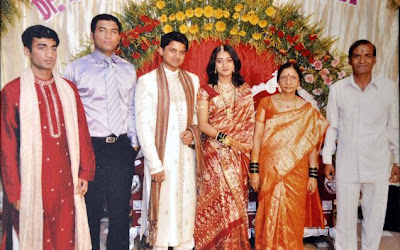 Savita was hospitalized for severe abdominal pain in “University Hospital” Galway on October 21st 2012. Doctors had determined within hours of her hospitalization, that she was miscarrying but refused over next three days, requests from Hallappanavar couple for a termination of her fetus to combat her own surging pain and fading health. Praveen says that, when the consultant came on the ward rounds, Savita repeatedly asked him: “ If they could not save the baby, could they induce to end the pregnancy?” The consultant had then said: “`As long as there is a fetal heartbeat, we can't do anything.”

Next day. the consultant told Savita that it was the law and this is a Catholic country. Savita even had told him: "I am neither Irish nor Catholic," but Doctors refused to to take any action. Savita vomited repeatedly and collapsed in a restroom that night still Doctors took no action to terminate the pregnancy as fetus's heart was still beating. The fetus died the following day and its remains were surgically removed. Within hours, Savita was placed under sedation in intensive care with systemic blood poisoning. In another two days her heart, kidneys and liver had stopped working and she was pronounced dead early on Oct. 28, 2012. Praveen's world had collapsed. Local Indian community in Ireland canceled Diwali celebrations and is naturally feeling extremely frustrated with the Government and laws of Ireland. 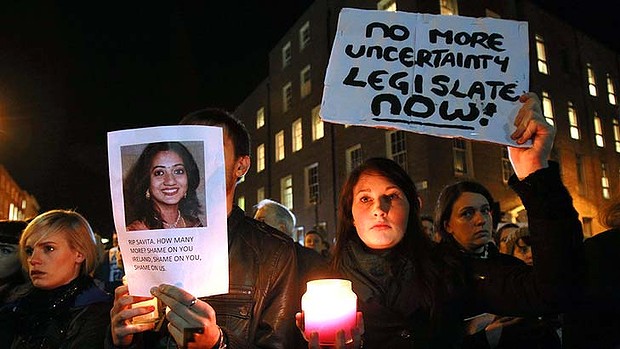 University Hospital now declines to say anything about whether Savita's blood poisoning could have been reversed had she received an abortion rather than wait for the fetus to die on its own. It only says that an investigation has been ordered along with a probe by National Government's Health service.

I really have no words to describe this any further, as it hits me in a very hard way. Now, after this young man suffered a terrible loss and a young and energetic woman is gone for ever, the opposition parties in Ireland want the Government to enact the legislation and bring the laws of the land in line with Supreme court order. People of Ireland have held demonstrations and rallies. Government of Ireland has offered all help to Praveen to reconstruct his life and Indian foreign office has taken up the issue with the Irish Government.

There are some very basic issues involved here, which need to be sorted out. When the mother herself, in her full senses, is asking the Doctor to terminate the pregnancy for reasons of medical emergency, how can the Doctor refuse? How Catholic laws can be enforced on a non Catholic, who was not even a citizen of Ireland. When Supreme court of Ireland had given green signal for medical termination of pregnancy and when mother's health was at risk, how the hospital refused to take any actions? A medical practitioner's basic duty is to save life of his patient. The University Hospital in Galway and the consultant treating Savita, have obviously acted derelict in their duty of saving the patient at all costs.

I am sure that this all, will make you very sad and angry, just like me.