A 'Civic' in the sky 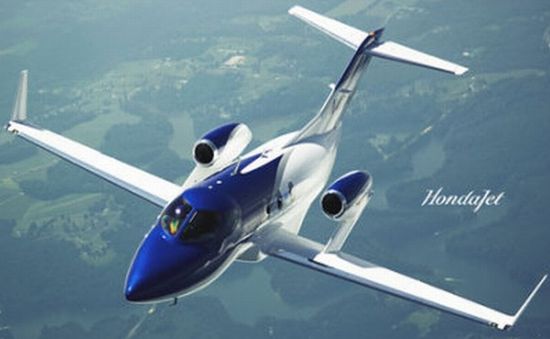 Honda 'Civic' has been one of the most popular cars from Honda stable. 'Civic' is a line of subcompact and subsequently compact cars made and manufactured by Honda worldwide. It was introduced first as a two-door model, followed by a three-door hatchback in 1972. Millions of 'Civic' cars have been sold in United states alone. It has been one of the top selling car in many countries and is always considered as a common man's car.

Honda Motor company now wants to repeat, what it did in automobile sector, in aviation too. It has begun making its unconventionally designed small passenger jet in Greensboro, North Carolina, in the United States, which the company hopes would be a "Civic of the Sky" and would place the company as a major competitor amongst world's aircraft manufacturers. Honda officials hope that HondaJet will shake up the corporate jet business in the same way as first-generation Honda Civic did to rattle Detroit's auto giants three decades ago.

HondaJet is a small passenger Jet plane just for 5 persons. It is supposed to offer high fuel efficiency, clever design, price and much more cabin space. It has an odd-look because of its engine-over the wing design, where its two engines have been located at some height above its main wings. According to company officials, this odd design is part of the reason for its greater space and fuel efficiency. HondaJet is designed to cruise about 10 percent faster and can take off and land on shorter runways, compared with roughly similar business jets now available. The present price tag for the aircraft is just US$ 4.5 Million, making it one of the cheapest Jet planes in US market. HondaJet is similar Embraer SA's Phenom 100 and the Cessna Citation CJ1+, now available in the market but is much more economical. It consumes about 20 percent less fuel and offers about 20 percent more cabin space, and huge cargo space. It also offers what other small planes do not offer: a full-size lavatory.

HondaJet project began in the late 1980s and at the time it appeared highly unrealistic as it held the possibility of converting Honda Motor company from one of nearly a dozen Japanese car makers in US into a successful Japanese aircraft manufacturer in US. The project faced skepticism even within the Honda Motor Company, as many top bosses were unhappy about the unorthodox design of the plane. HondaJet may also face steep obstacles in entering the market because of its unusual design and lack of a proven track record in service and maintenance. All this newness may scare lot of people and they may take a wait and watch attitude. The project is now running about two years behind schedule. The company now expects to receive U.S. federal certification for the jet's engine before end of 2012 and for the aircraft overall before end of 2013. The Company claims that well over 100 customers had placed orders for the HondaJet. It aims to install a production capacity in US to be able to produce 100 jets a year within two to three years.

Many Honda executives are counting on the project, to rekindle the daring, risk taking spirit that was the hallmark of the company in early days of its innovation.