The Gates of the Shrine at Somnath 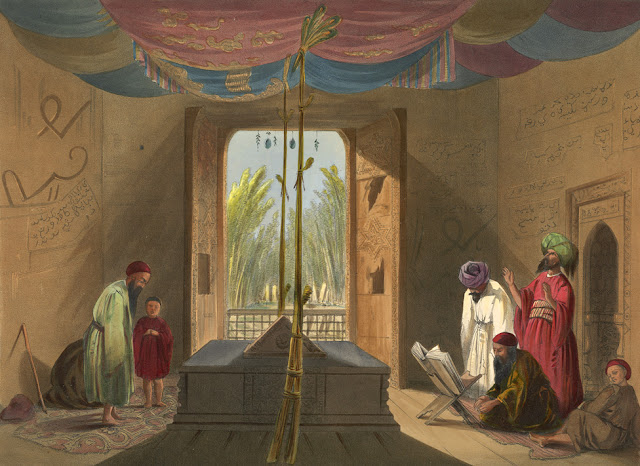 I had been reading a travelogue titled “ The Places in between” written by a British traveler “ Rory Stewart,” who walked across Afghanistan, just after the fall of Taliban in the year 2002, from Herat in western Afghanistan to Kabul in the east. The author, it appears from his book, is quite fascinated with a similar travel made by the first Mogul emperor of India, Babur, at age of 22 in the year 1504. Stewart retraced the footsteps of Babur in the dead of winter, carrying no food and very little gear, and wearing only a salwar kameez and a heavy coat. He somehow managed to navigate the treacherous peaks, frozen rivers, and deep snows of the Hindu Kush. 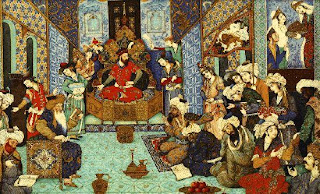 
He describes in his book, his visit to the city of Ghazni and according to him, the only interesting place of tourist attraction there is the old mausoleum or tomb of Sultan Mahmud of Ghazni. He describes the place in detail along with the surrounding gardens. While reading this book, I realized that this Sultan Mahmud, of Ghazni, might have been an Afghan hero, but he happens to be one of the most hated figures from history in India, as he had raided, in the 11th century, the most revered  shrine of Somnath or Prabhas Teerth on western sea coast of India and after he had defaced the idol in the temple, had carried away enormous amount of wealth from the temple. 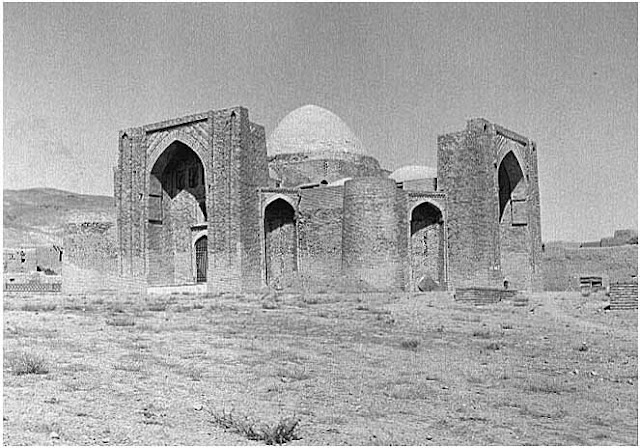 An old photograph, which claims to be that of Sultan Mahmud's tomb

Because of this historic connection, I read Stewart's narrative about the Sultan's Mausoleum with much more interest than usual. Stewart describes in his book that this tomb was kept buried in earth during the blitzkrieg of great Genghis Khan in Afghanistan to prevent its destruction and was dug up later by the grandson of great Timur-i-lang. I found out another interesting bit in the description of the tomb. The gates of this Mausoleum were made from sandalwood and were looted by the Sultan Mahmud from his raid on Somnath temple in India, where these gates once adorned the temple entrance. After the first British- Afghan war in 1842, the British army had removed these gates and brought them back to India. 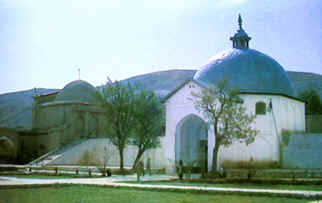 I became quite interested in this bit of history and tried to find out about the gates from Ghazni. What I found was so enthralling that I want to share it with the readers. Around year 1600, a Persian historian, Muhammad Qasim Hindu Shah, known by the name Firishta, first came up with the story of Somnath gates.

In his book Tarikh-i Firishta, he devotes a full chapter to Sultan Mahmud of Ghazni and claims that the Sultan removed the gates of Somnath shrine during his raid and carried them to Ghazni. An English historian Alexander Dow, believing that Firishta's narration must have been a true story, included it in his book “ History of Hindostan” published in 1767-72. This story was carried forward by other English historians of 19th century.

The Shrine at Somnath

In the year 1842, East India Company of England had appointed Earl of
Ellenborough as Governor General of India. On his arrival in India, he was welcomed by the news of massacre of Kabul, and the sieges of Ghazni and Jalalabad, in the ongoing British-Afghan war. He gave orders for the British army to continue to fight, which resulted in subsequent fall of Kabul and Ghazni. It is not known, who informed Earl of Ellenborough about the Somanath gates supposed to have been installed at the tomb of Sultan Mahmud in Ghazni. He instructed British general William Nott to remove the gates and bring them back to India. Acting on orders from the Governor General, William Nott paid no heed or attention to fervent requests and pleading of Ghazni Mullah's, for not removing the gates and the British Army returned to India with the gates.

Earl of Ellenborough then issued a proclamation, declaring how the British monarchy have avenged an 800 year old misdeed of Sultan Mahmud of Ghazni, which has been paining the Hindu's of India like a thorn. Unluckily for him, none of the Hindu rulers of states as well as common Hindu people took much of the cognizance of this proclamation. Ellenborough's game plan of driving a wedge between Hindu and Muslim population of India and proving that the British rules are their only real saviors, turned into complete fiasco.

When the Ghazni gates were inspected by experts in India, they were found to have been made not from Sandalwood but ordinary Deodar wood. The design pattern and motifs carved on the gates was also not of Indian origin. Because of these reasons the experts concluded that the gates in no case could possibly have an Indian origin. After this the gates were handed over to Archeological department in Agra and have been lying there since.

Another view of the shrine at Somnath


In 1951 some Muslims from Peshawar city started a signature campaign for return of these gates by Indian to Afghanistan. However Government of India announced that the entire story of the Somanath gates is figment of imagination and it does not have in possession any such gates and drew curtains on the matter.

The British rule in India was always based on a policy of divide and rule. This policy usually worked for them. However this is one instant, where it did not work at all. The story, in the first place was concocted during Firishta's or even earlier times. Firishta included it as part of history without verification in his book and was carried further by British historians. Based on this, some very fertile brains in the British administration of India came up with this brilliant plan of carrying the gates from Afghanistan to India and then try and use this fact to create goodwill amongst the Hindu population.

Unfortunately none of this worked and whole British plan turned into a complete fiasco.