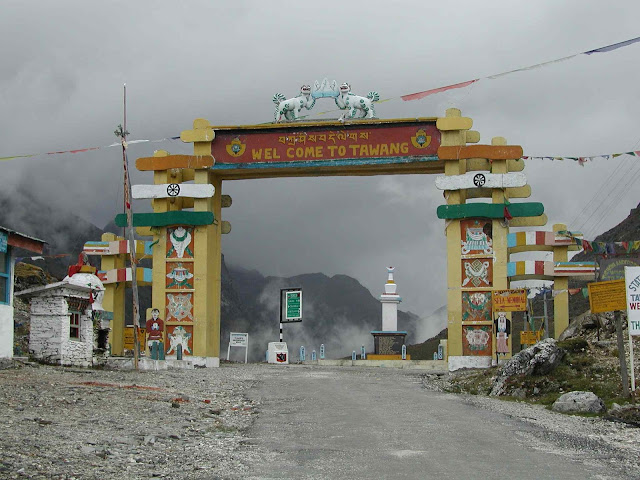 (Continued from)
The Namka Chu river flows towards east from the Tri-junction point on Bhutan-India-Tibet borders, along the India-Tibet border, till it reaches the eastern end of the Thagla ridge, to confluence with Nyamjang river. From this point, this river now flowing southwards, crosses India-Tibet border and flows into India all along the Bhutan border to reach villages of Lumpo and Shakti and eventually meets east-west flowing Gomkang Chu river first and later the Tawang Chu river. Shakti village mentioned here is located roughly to west of district town of Tawang. The main road from Shakti village to Tawang, passes through Lum La pass. As we saw earlier, Chinese army or PLA soldiers crossed McMahon line international border on 23rd October 1962 and with rapid advances reached Lumpo first and then Shakti village.

Tawang town is considered as one of the most important towns of NEFA or Arunachal Pradesh. In October 1962, a number of army units such as 4th Artillery, 4th Infantry and 22nd Mountain had their divisional headquarters located at Tawang. The nearest pass on India-Tibet border at Bum La was located about 26 Km from Tawang. The second important border pass at Tutling La was at some distance to the east of Bum La. The entire plan for defense of Tawang was made on an assumption that Chinese advance would take place through one of these passes and accordingly Indian troops were well dug in solid defensive positions all along the roads leading to these passes. However, when news of rapid Chinese advance through Nyamjang river basin reached the garrison at Tawang, the Generals in command faced a real dilemma as they had no ready plans to defend Tawang town.

There was only one route available from Tawang town to nearest rail head at Tezpur in Indian state of Asaam. From Tezpur, this road could take only light army trucks (1 Ton capacity) up to town of Jang, via Bomdi La, Dirang-Se La route and after crossing the bridge on Tawang Chu river. After Jang, all materials had to be transported by horses or mules. Defenders of Tawang knew that there was an alternate track available from Chinese border east of Tawang, which directly connected to Jang town. If Chinese troops would advance along this route, they would reach Tawang Chu river at Jang with least difficulty and destroy the only bridge on this river. In this eventuality the entire garrison at Tawang and all units stationed north of Tawang would be cut off from only supply route available from Asaam.

The garrison in Tawang was commanded by Maj. General Niranjan Prasad. Considering the situation in Tawang and in consultation with his superior, Lieutenant General L.P. Singh, he took a decision, which is considered as the most controversial decision of this 31 days war. According to this decision taken on 23rd October, all troops stationed in Tawang and in the north were asked to withdraw, south of the bridge on Tawang Chu at Jang. Many officers posted in Tawang did not agree with this decision as garrison in Tawang was well provided and stocked and they could have defended Tawang for a long time. Besides, even in case of the bridge on Tawang Chu destroyed by Chinese, it could be rebuilt by Indians as right up to that bridge the road from Assam was motorable.

Indian forces retreated south of Tawang Chu by 6 PM on 24th October and the bridge on Tawang Chu was demolished. This decision to retreat, created tremendous demoralizing effect on Indian troops and enabled the Chinese to capture Tawang town and entire region north of it without firing a single bullet. With this sudden change in the situation in their favour, rapidly advancing PLA troupes stopped in their tracks for next 3 weeks to consolidate their positions.

The situation in the Indian positions south of Tawang Chu river was that of utmost chaos and confusion with no one knowing exactly the chain of command and the real situation. New units were continuously arriving from Assam. In many cases, their equipments and arms were being sent somewhere else. The decisions regarding where these troops should position themselves were continuously changed as proper chain of command did not exist. There was a great shortage of trucks every where. The troops were transported to new locations but their gear was left behind. A detailed description of this state of chaos is given in the official report published by the Government of India and makes a very sad reading.

After retreating from Tawang, it was decided first to defend the Se La pass. This decision was suddenly reversed and it was now decided to build main Indian defensive positions on the bank of Dirang Chu river near the town of Dirang. Defensive positions however were also built along Se La – Jang route. After waiting for 3 weeks, Chinese resumed their attack in three columns. Besides a column moving along Se La route, two columns attacked Indian positions from two flanks. It is impossible to narrate what happened on 17th and 18th of November as the situation in the Indian camps was of ultimate chaos. Army commanders were giving orders, which were often contradicting. A review carried out after the war came out with a startling revelation that on these two days no one actually knew, what was really happening. After noting the overall retreat of the Indian army from all positions, the officer in command of NEFA operations, Maj. General B.M.Kaul gave orders for retreat and re grouping of Indian forces to south of Bomdi La.

Only silver lining on the dark clouds in this situation was the fight that defending Indian troops gave to advancing Chinese. Indian troops fought bravely and gallantly without bothering least about their lives. Unfortunately, because of the lack of co-ordination, method or order in the command chain, this great fighting effort by Indian troops, did not produce any harmonious and lethal impact on the enemy. In this state of confusion, a battle was fought near “Lagyala Gompa' Buddhist monastery near town of Dirang. This battle, just like the battle of Rezang La in Ladakh, can be called mother of all battles in Arunachal Pradesh.

Here, Lt. Col. Bramhanand Avashthi and his men defended their positions till the last man and the last bullet. When the Chinese eventually overran the Indian position, Lt.Col. Avasthi and his 126 men and officers wear lying dead at their battle stations along with 200 dead bodies of Chinese invaders. After the battle, victorious Chinese had buried all dead bodies of Indian soldiers along with their dead but at a separate place. After the war was over, the dead bodies of Indian soldiers were exhumed and later cremated. The local people consider this battle ground now as a revered place and pay their respects by carrying out 'Pooja' here regularly. A detailed description of the Dirang battle can be read on this link.


Indian troops now in retreat to south of Bomdi La were a totally demoralized and depressed lot. Instead of advancing by Dirang-Bomdi La route, Chinese outflanked Indian defenses along this route by rapidly advancing along an unused track. Indian forces were totally surprised and Chinese forces were able to capture Bomdi La with least effort. Two tanks were sent by army HQ to defend Bomdi La. However they proved to be quite ineffective against Chinese anti tank weapons.

On 21st November 1962, Indian troops started arriving on their foot at the foot hills of this hilly region in an extremely demoralized, worn out and haggard condition. The official Government report says that even to watch these troops, known for their gallantry and bravery was an extremely painful sight. On 21st November itself, Beijing radio announced unilateral cease fire on all fronts and Chinese advance came to an end.
This story of Indian retreat and defeat in the Kameng sector of NEFA was repeated in Subansiri, Siang and Lohit sectors also. In Kameng sector, it can be said that there was a border dispute about Thagla ridge between India and China. In other sectors there was never any dispute about the border. Yet the attacks came, just proving the fact that Chinese had planned all this operation very carefully and well in advance. It was no spur of moment decision on part of Chinese leadership. What they probably never expected was the speed of collapse of Indian defenses and the debacle that happened.

After recalling the account of pathetic Indian defeat and retreat in Kameng sector of Arunachal Pradesh, a question lingers in my mind. Who really defeated the mighty Indian army known for its bravery and gallantry here? I do not have answers and leave the question for the readers.