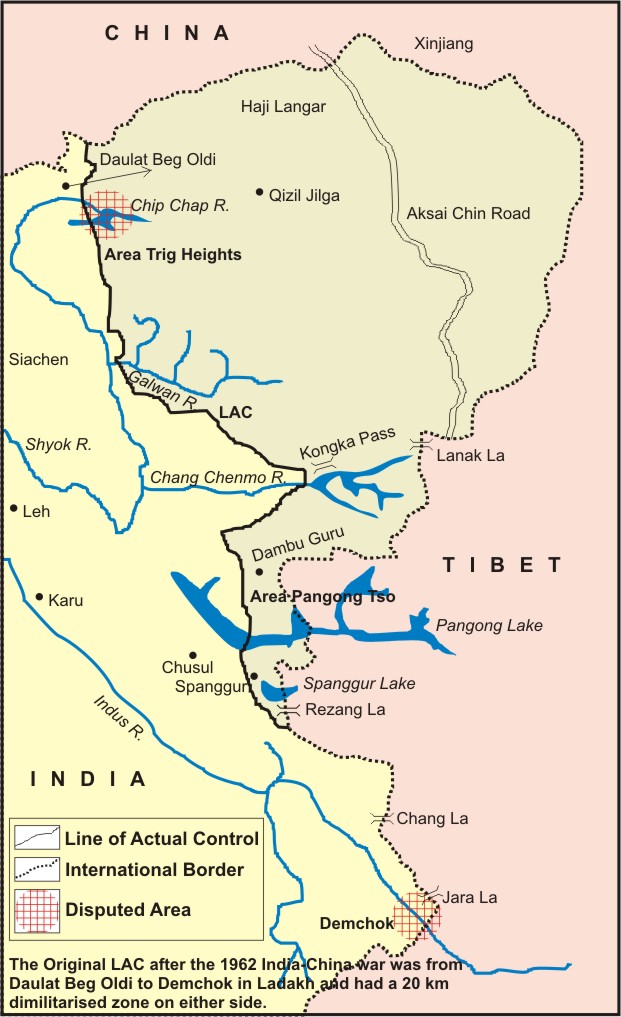 By October 1959, Chinese defenses in east Ladakh were so much fortified and strengthened that Indo-Tibet Border Police or ITBP personnel found it almost impossible to deal with the intrusions made by Chinese inside Indian border and their extremely arrogant behaviour towards the Indians. The decision taken in Delhi to withdraw ITBF units from border and bring in regular army units in their place was a welcome measure and brought some stability along the border.

Militarily speaking, the situation in east Ladakh was grave and serious. The entire region of Aksaichin belonged to India only on paper and in the maps. Chinese soldiers had fortified and blocked all approaches to Aksaichin from Ladakh. Chinese soldiers had established well fortified defenses along the nortrhern approach to Aksaichin near Chipchap river as well as near Kongka pass in the south. In addition, entire region east of Chushul town including Yu La, Spangur gap and Pangur lake were controlled by Chinese. Beacuse of this, the airstrip at Chushul was in continuous danger of being taken over. The supply route to Chushul town through Tsaka pass was in range of Chinese field guns and Chinese were in position to cut off this route at any given time. In short, all possible routes to Aksaichin were effectively cut off by the Chinese and this region was lost for India. This was primarily because the 1952 report by Capt. Nath and Capt. Suri was kept under wraps and no timely action was ever taken.

After studying the ground situation, Army's western command, made a demand of at least 1 division strength of troupes (15000 fighting men) to Army head quarters in Delhi. However western command was given only 1 Brigade strength (3000 men) only. Most of the new arrivals were earlier stationed in the south of Himalayas and were not properly acclimatized for the great heights at which they were now positioned. These men were not provided with proper warm clothing and other accessories for effectively operating in Ladakh under severely cold conditions. They were equipped with World War II, 0.303 single bolt action rifles which were no match for the semi automatic weapons that Chinese soldiers had.

Meanwhile slowly, as Indian people started becoming aware of the Chinese actions and intentions, a tremendous public pressure grew on Government of India to take some concrete steps to effectively counter the Chinese advances in Ladakh. Prime minister Nehru, who had kept reports of Chinese activities under wraps so far, finally buckled under pressure and announced, what he called as forward policy, under which Indian outposts were to be established east or north of present positions to effectively counter Chinese advances.

Irrespective of what the Government or the Prime minister had said in the Parliament, the ground realities in Ladakh were militarily so depressing that only thing that was possible was to set up few advance posts in areas where there were no Chinese posts present. Within next year Indian Army established 17 such posts from Daulat Beg Oldi area near Karakoram pass in north to Demchok post on Indus in south. Strategically most of these posts were located in such disadvantageous locations that neither it was possible to have reliable supply routes to these posts nor was it possible to provide them with any artillery or tank cover in case of any major attack from the enemy. These posts were essentially set up as advanced observation posts and were in no way capable of defending themselves under serious enemy action. It is therefore no wonder that most of these posts fell in 1962 war within few hours or days.

To defend the Chushul town from any attack, advanced posts were established at Yu La pass, Sirijap La pass on the north shore of Pangong Lake , hill features like Gurung Hill, Magar hill and an important pass on east shore of Pangur lake known as Rezang La, which effectively blocked any Chinese advance towards Tsaka La pass supply route to Chushul. Establishment of these posts immediately improved the stability in the border area and brought about marked reduction in Chinese encroachments and their arrogant behaviour. Many critics say that the Forward policy was one of the major attribute for the 1962 border war. This is certainly true to some extent. But it must be appreciated that if these forward posts had not been in position, during next few years, the Chinese would have encroached much deeper inside and would have grabbed much more Indian territory. Secondly, in spite of mainly being observation posts, most of them gave such a stinging blow to PLA when the war broke out, before surrendering to the Chinese, that by end of the 1962 war, the ground realities remained more or less same as in 1959.

In early 1962, as it became apparent that war was imminent, the garrison at Chushul town, received much wanted help from Leh. More troupes joined them. In the month of May 2012, an Indian forward post manned by a Junior Commissioned officer and 14 men were confronted by about 200 Chinese soldiers at about 120 meters from the post. As per orders received, this JCO controlled himself and kept quiet. After some time Chinese left. In an another incidence on 10th July 2012, an outpost, being manned by Gurkha regiment, was confronted by 350 Chinese soldiers, who came up to 200 meters from the post and tried to convince the Gurkha soldiers, by speaking to them on loudspeakers, that they should not fight for India. The outpost commander Subhedar Jung Bahaddur, started cursing the Chinese in his native Gurkhyali language. After this Chinese left. Occurrence of such incidences on regular basis, made each and every Indian soldier in Ladakh acutely aware that war was now Imminent.

Indian outposts in this region were attacked first.
On the night of 21/22 October 1962, Chinese made their first major attacks. In northeast Ladakh, a small river called Galwan joins the Upper Shoyok river near a summer camp known as Saser Brangsa. Indian outpost near about upper Galwan river, received the first attack of Chinese soldiers. This post fell after Chinese artillery bombarded this post for entire day and when the commander of the post, Subhedar Jung Bahaddur Thapa was killed. The Chandani outpost north of airstrip at Daulat Beg oldi manned by just 28 soldiers and commanded by Subhedar Sonam Stobadan was attacked by 500 Chinese soldiers. All soldiers manning this post except one soldier, who was wounded, perished in the attack. Subhedar Soman was later awarded a gallentry award known as “Maha Veer Chakra” posthumously. Another observation post 1t 17000 feet height and known as Parmodak was manned by only 5 Indian soldiers. They were all killed on this very day. Bishan outpost at 18645 feet was bombarded by Chinese for 45 minutes and was subjected to two infantry attacks on the same day. Both the attacks were repulsed successfully. After this the outpost was vacated on orders, which clearly stated that the troupes must vacate the posts if attacked. Chinese had succeeded in capturing almost all Indian outposts, north of Galwan river on the very first day of war.

Situation on that day, even in southeast Ladakh, was not much different.