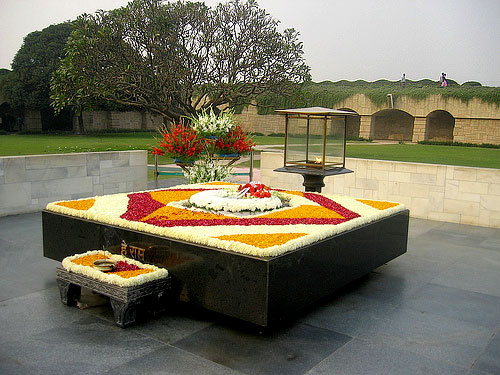 Don't get ideas! Neither I am talking politics nor any political bigwig from India is on my radar. I am writing about Australian Prime Minister Ms Julia Gillard, who is on an official visit to India to discuss issues of mutual interest including issue of supply of Uranium ore to India.

It is customary that whenever any foreign dignitary is on an official visit to New Delhi, the dignitary usually pays a visit to Gandhi Memorial or 'Samadhi' at Raj Ghat on the bank of the Jamuna river and lays a wreath at the Gandhi memorial. Following the customary protocol, Ms. Gillard visited Gandhi memorial to pay her respects to the father of the nation, Mahatma Gandhi.

It was just after when Ms. Gillard had laid the floral wreath on the Gandhi Samadhi and had turned back, that the disaster struck. On all sides of this Gandhi memorial, there are patches of beautiful lush green grass. As she was walking towards reporters for a press conference, her high heel got stuck in soft grass and she landed flat on her face in front of all reporters and TV cameras. Luckily she was not hurt or bleeding and she quickly got up and quickly and admirably laughed it off. She later quipped to the reporters;

"For men who get to wear flat shoes all day every day, if you wear a heel it can get embedded in soft grass and when you pull your foot out the shoes doesn't come."

Australian media, who have showed the TV clip of her fall on TV, report that such falls are nothing new for Ms. Gillard. The Sydney Morning Herald says under a caption "Gillard flat out on Indian tour," that Gillard has a history of losing her shoes, most notably as she was being whisked away from protesters at a function in Canberra in January 2012. Her footwear later turned up on eBay. More recently, she had slipped out of one of her shoes as she was taking the stage at an event in Sydney. Ttabloid Daily Telegraph, has put the news of tumble on its front page under the headline "PM's fall from grace," with a comment that grass and high heels do not mix.

Leaving the fall apart, Australia and India got down to serious business next day and agreed to start negotiations about a civil nuclear co-operation agreement. Bilateral trade between Australia and India is worth $20bn and is growing at the rate of 20% every year. 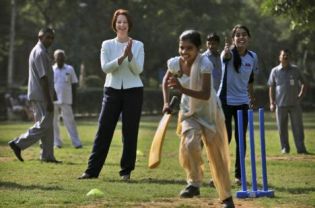 Australian Prime minister is a slim person and that is why perhaps she carried off the whole embarrassing incident so lightly and admirably. She quickly recovered and went along with the next programme in her schedule: watching underprivileged Indian girls play cricket at a camp in New Delhi . Can you imagine, what would happen if any of our Indian bigwigs ( in stature and in size) are to face similar situation, in another country? May be broken bones and hospital stays perhaps.