Last week I made a journey by one of these Intercity coach services. The air conditioned coach was no doubt pleasantly luxurious and comfortable. While riding the coach, even on bumpy or rough patches of the road, the ride was superbly smooth, thanks to the latest technology used in the manufacture of the coaches. Though my journey was from a city to city, we passed through many mofussil or upcountry areas, villages, small towns and Bazaars. Since it was a working day, I saw number of school and college going kids on my way, wearing uniforms which varied from school to school. I however noticed something very common amongst all of them. Right from primary school kids to young men and women attending colleges, everyone had a backpack on their backs. Backpacks have become so common now that they could be called as universal accessory irrespective of age, sex or dress no doubt.

Backpack probably is a symbol of present day youth. Backpacks are usually stitched from waterproof fabrics like Nylon and come in so many vivid colours. Backpacks also have different kind of pockets. All backpacks however always have two straps with which they can be hung on the shoulders and a packet usually made from Nylon net on a side, in which another symbol of present age, a PET bottle carrying potable water is usually squeezed in. Main advantage of a backpack is that it can be strapped on your back, leaving both hands free. Because of this advantage, backpacks are extremely popular with two wheeler riders.

I remember that about fifty years ago, when I had bought my first two wheeler, I had preferred a scooter to a motorbike primarily, because Scooters in those days came with a Dicky to dump all kind of odd shaped stuff while driving. Since now, most of the motorbike riders carry a backpack on their backs, the advantage of having a Dicky on your vehicle is almost lost. This must be one of the reasons of increasing popularity of motor bikes over scooters these days. 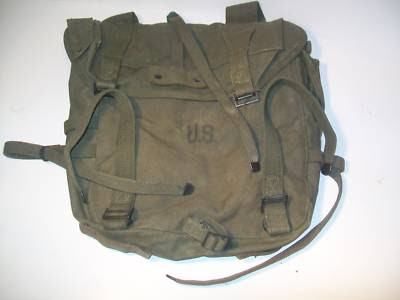 Soldiers fighting in second world war used to carry a bag made from Khaki coloured canvas on their backs. These bags were called backpacks or rucksacks and were usually strapped on the back by help of two thick woven straps. The soldiers used to carry in this sack their rations, medicines, clothes and ammunition. Somehow these backpacks came to be called as haversacks for unknown reasons.( An haversack is a bag carried on hips and is tied to the waist with a single strap. We might consider this WW II rucksack as grand mother of all present day backpacks without least doubt. When I was a school going lad, my father always wanted me to carry one such army disposal rucksack as my school bag; an idea, which I very much hated. Almost everyone in my school used to bring an ordinary cloth bag as a school bag and I was always afraid that I would look an odd kid out. That might be the reason why I never liked a backpack.


Today's backpacks, in spite of their high fashion look, are essentially the same army disposal bags only made differently and with different materials. For young mothers travelling with infants or small kids, these bags turn out to be a real boon. However, whenever I see some such young mother with a backpack travelling along with me on the same bus or aircraft, I am extremely cautious and maintain my safe distance from her. If these backpacked young mother is sitting nearby you, you never know, when you would receive a direct hit, when this backpacked person turns around or tries to remove or put on the backpack or tries to place it in overhead luggage compartments. And if you have the misfortune of travelling with such backpacked person, you are likely to suffer all the time as you may be asked with odd jobs like taking out baby wipers from front pocket or sipper from the middle pocket or diapers from the bottom packet etc. At the end of the journey , you are likely to go almost nutty.

The brand image of backpacks had suffered a serious body blow sometime back. Can you imagine the photograph of the lone terrorist from the Mumbai bombings, who was caught alive by police. I am sure that you would remember his image in which he is wearing a backpack and is firing from his AK 47 rifle. The Bombing of German bakery in my hometown Pune was done by placing explosives in a red coloured backpack and which was kept on a chair in the cafe. If people on the streets saw those days an unclaimed backpack lying anywhere, they immediately panicked. People wanted that backpacks should be banned. Any way it is easy to realize that it would be impossible to ban backpacks though it may be possible to place some restrictions on their size surely. Fortunately, that worrying phase is gone now and we again see common people of all ages carrying a backpack with them everywhere.

Finally, coming back to my intercity travel, which I described in the beginning, I watched my co passengers disembarking from the bus after we reached our destination. It was bit of a surprise to me that almost everyone was carrying a backpack. And here, at the end, I also must make an confession. In spite of my early reluctance, I invariably carry a backpack these days. After all it is so convenient! HaHa!