The return of the Bodhi tree 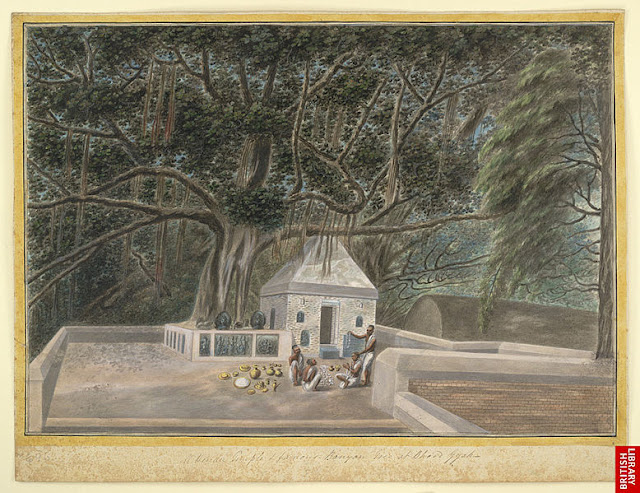 The Biographies of Buddha like “Lalitavistara” , “Mahavastu” and “Nidankatha” describe in great details the story of divine attainment of the “Bodhi” or supreme knowledge by Sakya tribe Prince Gautama Siddhartha. This story has been described in essence in a research volume titled as “2500 years of Buddhism” and I quote from this Book.

“ At the end of six years of penance, when he was thirty six years old, he (Prince Gautama Siddhartha) felt that in the course of the day he would become a Buddha, an awakened one. At noon he was offered a bowl of milk pudding by Sujata, a rich merchant's daughter, who was devoted to him and in the evening a grass cutter gave him bundles of dry grass on which to sleep. He regarded these as good omens and sitting firmly under a Peepal(Ficus religiosa ) tree on a cushion made of grass, he said “Let my skin, my nerves and bones waste away, let my life-blood dry up, I will not leave this posture until I have perfect attainment.” His resolute attempt set Mara, the god of evil, thinking that he should not allow Gautama to escape from his thraldom. He caused a violent thunderstorm to frighten the Bodhisattva that Glutamate then was, but in vain! All the missiles hurled by Mara at his victim turned into flowers. Mara tried to tempt him with promises of rebirths in heaven but the Bodhisattva, or the one destined to achieve enlightenment would not bend. Mara was discomfited in the end and his army fled in all directions. This battle off course, was a metaphorical conflict between the higher and lower aspirations in Gautama’s mind. During the night Gautama discovered the law of Causation, a cycle of 12 causes and effects conditioning the universe. This law had not been thought before by any philosopher. Its authorship raised Gautama from his status as Bodhisattva to that of Buddha.
He exclaimed solemnly;
Truly when thing grow plain
To the ardent, meditating brahmana
Routing the hosts of Mara does he stand
Like as the sun when lighting up the sky
He spent four weeks in contemplation under the tree, now called the Bodhi, after which he set out on his travels.”

I have quoted these lines in detail just to highlight the fact that when Prince Gautama Siddhartha achieved his divine attainment or raised his status from a Bodhisattva to a Buddha, the ordinary Peepal (Ficus religiosa ) tree, under which he sat for those four weeks, also changed its status and became a Bodhi or the tree of supreme knowledge. It is therefore no wonder that in the Buddhist world, this Bodhi tree is considered as one of the most revered symbol of high religious importance. The original Bodhi tree was destroyed during course of time. 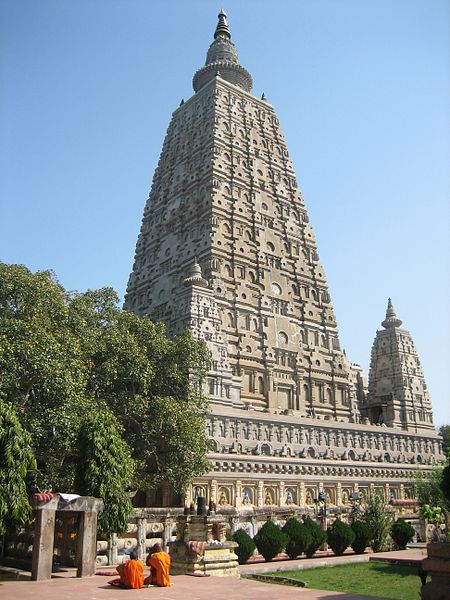 The place, where this Peepal or Bodhi tree stood once, was known by the names such as Uruvela, Sambodhi, Vajrasana or Mahabodhi. The present name for this place, Bodh-Gaya, did not come into use until the 18th century CE. The Buddhist Vihara here at this place was known historically as Bodhimanda-vihāra. Now it is called the Mahabodhi Temple. Bodhi-Gaya is located about 110 Km from Patna, capital of Bihar state of India.

It is believed that 250 years after the Enlightenment of the Buddha, Emperor Asoka of India had visited Bodh Gaya. He is believed to be the founder of the original Mahabodhi temple. Emperor Asoka's first wife, known as Devi or Vedisa-Mahadevi was the daughter of a merchant from Vedisa near Ujjain in Madhya Pradesh state of India. Emperor Asoka had met her in the merchant's house, when traveling to Ujjain. Devi was from a family of Sakya tribe, to which, Prince Gautama Siddhartha had belonged. Emperor Asoka had a son known as Mahindra and a daughter known as Sanghamitra from Devi. She howver never followed him to capital of the empire, Pataliputta and stayed at Sanchi, where the famous Stupa still stands. Emperor Asoka had asked his son Mahindra, who had become a monk, to visit Sri Lanka along with his sister Sanghamitra on a proselytizing mission to promote the Buddhist religion. Mahindra and Sanghamitra had carried over to Sri Lanka, a sapling of the original Bodhi tree, under which Prince Gautama Siddharth had achieved divine attainment. 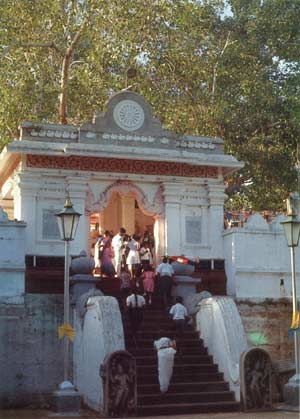 While travelling to Sri Lanka, Mahindra had stayed over at Sanchi to meet his mother Devi. Later, the sapling of Bodhi tree, which he had carried with him was planted at Mahamegha Uyana, the royal park to the south of the city of Anuradhapura in Sri Lanka sometime around 244 BCE. This tree exists even now and is considered as the most sacred tree in the world. In spite of having this tree in their own country, Singhalese monks still wanted and continued to worship the original Bodhi tree in India. Later during rule of Samudragupta (Grandson of Emperor Asoka). King of Sri Lanka Kittisirimegha, erected a Sangharama or a Vihara with the permission of King Samudragupta. The present Mahabodhi temple at Bodh Gaya has been built at the site of this Vihara.

When the original Bodhi tree in India was destroyed, a sapling of the Bodhi tree in Sri Lanka was brought back to India and planted at Bodh Gaya. It is this tree that visitors see here today. Famed Chinese traveller XuenZang had visited Bodh Gaya sometime in the year 637 CE. He describes this Vihara as,

“ Outside the northern gate of the wall of the Bodhi tree is the Mahabodhi sangharama. It was built by a former king of Sinhhala (Sri Lanka) This edifice has six halls, with towers of observation (temple towers) of three storeys; it is surrounded by a wall of defence thirty or forty feet high. The utmost skill of the artist has been employed; the ornamentation is in the richest colours (red and blue). The statue of Buddha is cast of gold and silver, decorated with gems and precious stones. The stupas are high and large in proportion, and beautifully ornamented ; they contain relics of Buddha. The priests of this convent are more than 1000 men; they study the Great Vehicle and belong to the Sthavira school. They carefully observe the Dharma Vinaya, and their conduct is pure and correct.”

I have indulged freely in  all this ancient history of India for a special reason. The present Sri Lankan President Mahinda Rajapaksa, who is on a personal visit to India, returned a slice of the history back to India, this week, when he planted a sapling of the Bodhi tree, from Mahamegha Uyana, the royal park to the south of the city of Anuradhapura in Sri Lanka, in Sanchi, India. This is the tree, that has grown out of the sapling taken by Emperor Asoka's son and daughter to Shri Lanka.

This sapling was planted at Sanchi in Madhya Pradesh state of India, where the great stupa from the times of Emperor Asoka, still stands. Sanchi was the place from where Emperor Asoka's son and daughter had commenced their journey to Sri Lanka and it is in fitness of the things that the sapling of the tree which was carried out of Sanchi in 244 BCE is brought back there again after two millennia.

The sapling was planted at the foundation venue of a proposed university in Sanchi, which will take shape over 100 acres, at a cost of Rs 300 crore and promises to follow higher education patterned in classical ancient Indian universities like Takshashila and Nalanda.

From Sanchi to Sri Lanka and back to sanchi; the most sacred tree in the world has now completed its return trip.