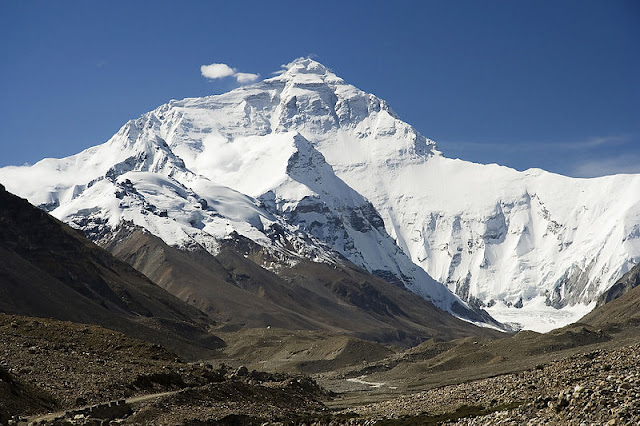 Some people seem to derive great pleasure in shooting the breeze. They claim that they have found something new and revolutionary out of old historical events and try to create new controversies and sensations for the media. A British author Mick Conefrey, appears to be keen to join rank of such sensationalists with his unnecessary claim, made by him in his forthcoming book titled 'Everest 1953: The Epic Story of the First Ascent'.

A British expedition was planned under leadership of John Hunt in the summer of 1953. The expedition members included some great climbers of those days including Edmond Hillary and Tenzing Norgay. Most of the climbers had already done some climbing on mount Everest and were quite familiar with treacherous climb. Tenzing Norgay was part of a Swiss expedition, which had attempted to reach the summit in 1952 but was turned back by bad weather and exhaustion 800 feet from the summit. Edmond Hillary was part of a British reconnaissance expedition to Everest in 1951 led by Eric Shipton. Hillary intended to climb with George Lowe but Hunt as the team leader, named two teams for the assault: Tom Bourdillon and Charles Evans; and Hillary and Tenzing. Hillary thereafter made a concerted effort to forge a working friendship with Tenzing. The Hunt expedition in all consisted of over 400 people, including 362 porters, twenty Sherpa guides and 10,000 lbs of baggage and like many such expeditions, was a total team effort.

The base camp was set up in March 1953. The team slowly made its way upwards and the final camp was set up at 25900 feet. Bourdillon and Evans were asked by Hunt to make an attempt for the peak on 26 May 1953 but had to turn back as Evans' oxygen system failed. The pair, before turning back, had reached the south summit about 300 feet below the summit. After this unsuccessful attempt, Hunt directed Hillary and Tenzing to make an attempt for the summit. The attempt had to be put off for two days because of heavy snow and wind. On 28th May, Hillary and Tenzing ably supported by George Lowe, Alfred Gregory and Ang Nyima set out for final camp. They set it up at 27900 feet and the support trio returned back to South Col. On 28th May, after warming his boots for 2 hours, as they were frozen solid, Hillary and Tenzing started their final attempt wearing 14 Kg packs on their backs. The last part of ascent was a 40 feet rock wall, named later as Hillary step. Hillary found a a crack in the face and team started for the final assault. 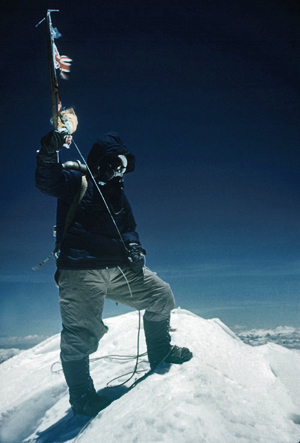 From that point the climb was well within means of the pair, and they reached the summit without any trouble. Hillary describes this last part of the climb as "A few more whacks of the ice axe in the firm snow, and we stood on top." It is a mystery of sorts, why Hillary was bit ambiguous and always claimed that both of them reached the top at the same time. However Tenzing has plainly stated in his narration “Dream Comes True” that Edmond Hillary had taken the first step atop Mount Everest. Hillary also took photographs of Tenzing standing on the top. Some people suggest that since Tenzing had never used a camera, Hillary's ascent went unrecorded. Hillary claims that “I just forgot.” However, this does not seem to be true. Tenzing says in his autobiography 'Man of Everest', that when he offered to take Hillary's photograph, Hillary just declined. He writes, "I motioned to Hillary that I would now take his picture. But for some reason he shook his head; he did not want it" 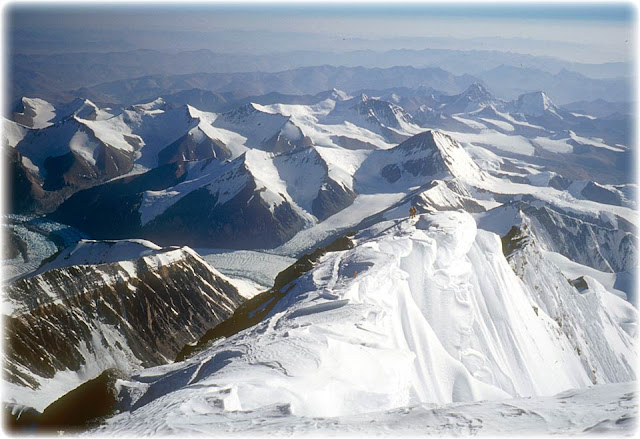 All these facts are in black and print for several decades and well known. I find it therefore rather strange that after so many years, British author Mick Conefrey has come out with this finding in his book, that is already well known to the world that Hillary stepped first on Everest. Conefrey tries to give a twist of conspiracy to this fact. He says that British Ambassador to Nepal Christopher Summerhayes, and John Hunt, leader of the expedition, fudged and covered up this fact to to defuse an anti-colonial backlash in India and Nepal. According to him some record in the archives of the Royal Geographical Society includes the original account of the achievement by Hillary, where in he has said that "(I) stepped on top of Everest... I quickly brought up Tensing (sic) beside me". 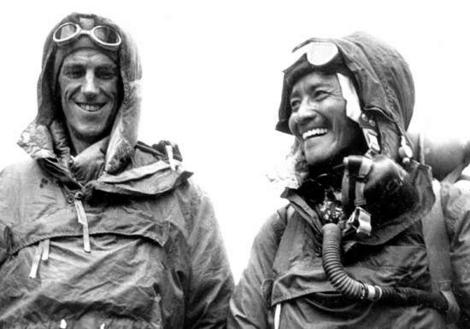 Perhaps Mick Conefrey might not be in the knowing of few facts. India was already an Independent nation in 1953 and the Expedition was a British expedition. Hillary was actually a New Zealand mountaineer. Tenzing was an Indian national at time of the expedition and not a Nepalese national, though he was born in Nepal. Under these circumstances, it is difficult to understand where from Conefrey has discovered his far fetched theory of anti-colonial backlash.

On the contrary, I feel that Conefrey's hypothesis is very unfair to Edmond Hillary, who comes out as a noblest and a generous soul from Tenzing's account, from where it also becomes clear that Hillary was keen, that all glory is jointly shared by the pair. He did not even allow Tenzing to take his photograph on the summit. Besides this. a mountaineering expedition on a peak like Everest is always a joint effort of the full team. It makes no difference, who steps on the summit first. It is the victory for the full team. I do not find Conefrey's attempts to colour the expedition with conspiracy theory, very appealing at all.

(Facts and figures sourced from Wikipedia)

After I wrote this post, I received an e-mail by the author of this book Mick Conefrey on 12 Dec. 2012, which says;

Read the book it should be out in India via Penguin next year, or read my latest blog: mickconefrey.co.uk/blog/entry/tenzing-on-the-summit-of-everest …﻿

Thanks Mick for responding to my blog post. Obviously, I have not read the book as it is not released in India. My post is based on the reports and excerpts from your book, available on net. These give an impression that you have been trying to to say that the fact that Hillary stepped on the summit first, was purposefully hidden. However, when Tenzing  himself accepts it in his book, where is the controversy? I do not think that anyone in India doubts, what Tenzing said in his book and therefore there is hardly any need for a debate on this. What British press or media did, hardly concerns us here in India. For us, both Tenzing and Hillary were great heroes.﻿

Just found this. Sure it is not an issue any more but mine is a historical book which looks in detail at how the expedition was covered in the media, so I tried to get to the bottom of it (or as close as I could). Cheers, Mick ﻿