India trying to buy its way out of Rohingya imbroglio. 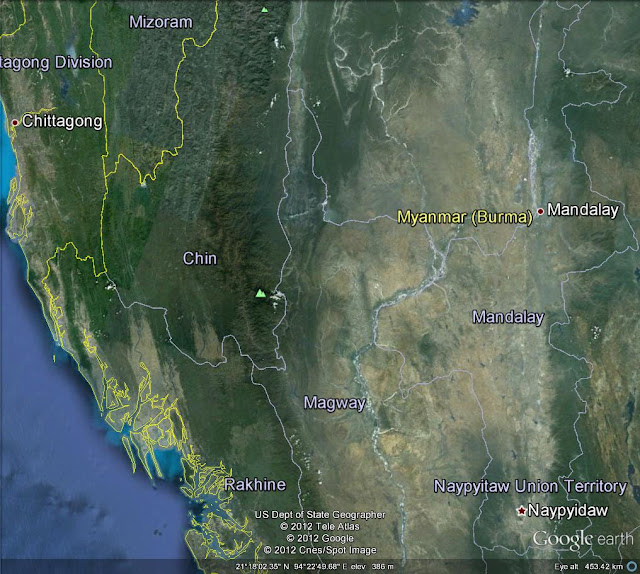 Sometimes, I come across news items in news papers, where I can make no sense out of them. Prima facie, they appear to be just incoherent and disconnected. This was exactly my reaction, when I read a news item about India donating a sum of US$ 200,000 to state administration of Myanmar's Rakhine state for the help of riot-affected people. This was something incomprehensible and puzzling that India was donating such a large amount for riot affected people in a foreign country and from a region, which does not even have common borders with India. This made me very curious and I searched. What has come out is something that is of vital concern not only for India but the entire south east Asia.
Let us first get the facts pin pointed. Rakhine state of Myanmar is a coastal state with Bay of Bengal in the west. The Arakan Mountains, which rise to 3,063 metres (10,049 ft) at Victoria Peak, separate Rakhine State from central Myanmar from the east and it has an international border in the northwest shared with the Chittagong Division of Bangladesh. It is separated from Mizoram state of India by a mountainous region known as Chin. However just along the border between Bangladesh and Myanmar the distance between Rakhine state and Mizoram is about 55 or 60 Miles only.
The entire Mizoram-Myanmar border is completely open and porous. Even According to the Indian Passport Act, Myanmarese nationals, especially Chins, are allowed to travel freely up to 40 km from the border inside Mizoram as they have many relatives on both sides of the border. But the amendments made afterwards now allow them free travel only up to 16 km inside Indian border.


Sittwe port, situated about 265 KM south of Chittagong, is at present a small port on Myanmar coastline. The port is located near the confluence point of river Kaladan with Bay of Bengal. This river in fact rises in the Indian State of Mizoram and flows south to Sittwe. The river is navigable only upto Paletwa. With India’s ‘Look East’ policy in force, India seems to have taken charge of the situation here. An agreement was signed between India and Myanmar in April 2009 regarding development of Kaladan transport project, which also includes development of Sittwe port. The project has been awarded to an Indian company ‘Essar Projects’ and involves constructing a port at Sittwe and a jetty at Paletwa, 120 kilometers of road to be built in Myanmar from the river terminal in Paletwa to the India-Burma border in the northeast. The project will have 333 miles (539 kilometers) of waterways and 140 miles of roads. It would be completed in 36 months at the cost of about $ 75 million and is entirely financed by India. It is expected that this project would boost links between ports on India’s eastern seaboard and Sittwe in Arakan (Rakhine) State, Myanmar. From there, goods will be shipped along the Kaladan River from its confluence near Sittwe to Paletwa in Chin State and by road to India’s Mizoram State, which will provide an alternate route for transport of goods to India’s landlocked northeast.
Rakhine state has a population of about 4 Million out of which 3 Million are mainly Buddhists, with remaining 1 Million are Muslims and are known as Rohingyas. The present Myanmar government regards Rohingyas mostly as illegal migrants from Bangladesh, even though many of their families have lived in Myanmar for generations. The military junta that ruled Myanmar over decades also treated them as foreigners. One of the main reasons for which Burmese people consider Rohingyaa as foreigners is that they very much look like their Bangladeshi counterparts across the border and also speak a Bengali dialect similar to one spoken by residents of southern Bangladesh. Even Aung San Suu Kyi, the longtime leader of Myanmar's democracy movement, has refused to make any statement about Rohingyas.
The fact of the matter is that no country now wants these people, who have been branded as foreigners by their own country. In 1978, Myanmar's army drove more than 200,000 Rohingyas into Bangladesh, out of which some 10,000 died in squalid conditions, and the rest returned to Myanmar. The campaign was repeated in 1991-1992, and again a majority returned. In 2009, five boatloads of Rohingya migrants fleeing Myanmar were intercepted by Thai authorities and then forced back to sea. In Myanmar, Rohingyas face routine discrimination, They are subjected to forced labor by the army. They must get government permission to travel outside their own villages and to marry. They are barred from having more than two children. 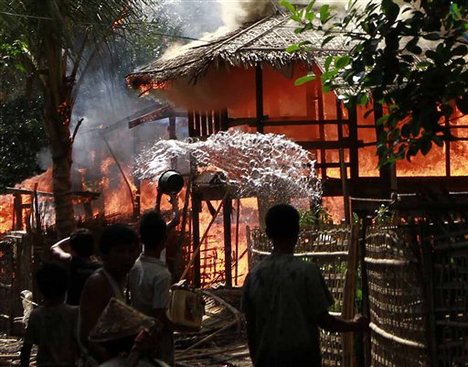 As a result of all this discrimination and increasing influence of the jehadi terrorist groups from middle east, there was a bloody outbreak of violence recently involving Rohingyas and ethenic Rakhine Buddhists in which dozens of civilians died. The unrest, which started with rumours that a 27 year old Buddhist woman was raped and murdered by Muslims erupted in mob violance that saw more than 2,500 homes charred and 30,000 people displaced. 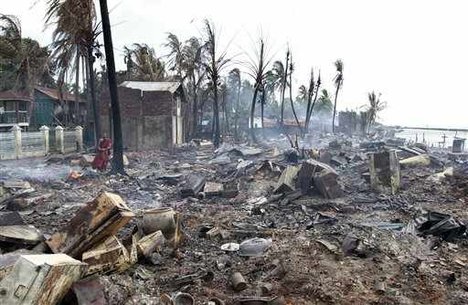 An ever increasing number of Rohingyas are trying to escape by migrating to Bangladesh or Thailand. In recent weeks, Bangladeshi coast guard units are turning back boatload after boatload of refugees telling them that they are Burmese, who should go back home. It is therefore no wonder that a ever increasing steady trickle of Rohingya Muslims has started reaching the Indian border. According to official figures the number of Rohingyas in India is around 8000, but BJP leaders in the north-east are already quoting a much larger number. The Rohingyas episode found its repercussion even in western Indian city of Mumbai, when protests by local Muslims last month, claimed two lives.
Government of India, which has a big stake in Sittwe port and also desperately wants to reduce influx of Rohingyas into India, has now come up with this measure of using monetary aid to solve the problem. According to Government sources, money, which was handed over to Rakhine chief minister U Hla Maung Tin by Indian ambassador V Seshadri, at a function in capital Sittwe, is meant for refugees from both the communities - the majority Rakhine Buddhists and minority Rohingya Muslims and would be used for purchase of roofing sheets for 800 semi permanent buildings to be built for the victims.
India's monetary help might bring in a temporary respite, but the main issue still remains unresolved. The Association of Southeast Asian Nations or ASEAN, already battered with Cambodia's refusal to go along with other countries about a united policy in South China Sea, is feeling uneasy and is seeking an explanation from member state Myanmar about recent ethnic violence targeting minority Rohingya group. Three of the ASEAN members, Malaysia, Indonesia and Brunei are Muslim majority nations and are supportive of Rohingya Muslims. This has further divided the ASEAN.
For India's northeastern states, already burdened with refugees from Bangaladesh, Rohingyas problem might turn out to be the real Sword of Damocles, unless effective steps are taken by Government of India to stop illegal migration at the Mizoram border.
6th September 2012
at 9:24 AM