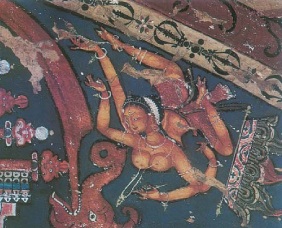 A visitor to any Buddhist monastery anywhere in the world, is always impressed first, with the large sized paintings on walls, frescos and banners. These are extremely colourful and usually depict many characters from Buddist scriptures such as Avalokiteswara, Amitabha and Bodhisatwa's, aspiring to be Buddha. Also usually painted are the four heavenly kings, who are the guardians of the four cardinal directions like Vaiśravaṇa, Virūḍhaka, Dhṛtarāṣṭra and Virūpākṣa. To show any heavenly place where these characters abode, celestial Nymphs are shown around, flying in the air. These Nymphs are known as Apsaras' and are usually painted as pictures of stunning beauty. 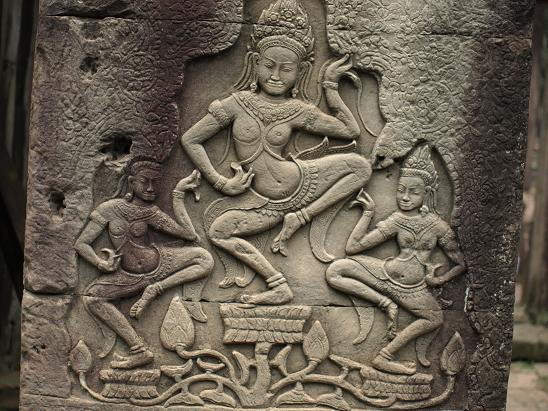 The creators and sculptors of Cambodia's ancient Khmer temples, were also fascinated with this concept of a celestial Nymph or Apsara. All Khmer temples have many Apsara figures engraved in the nooks and corners of the temples. Modern day Cambodia likes this concept even now. Many businesses, shops are named as Apsara. An important street in Siem Reap has a huge Apsara sculpture right in the middle of a road junction. 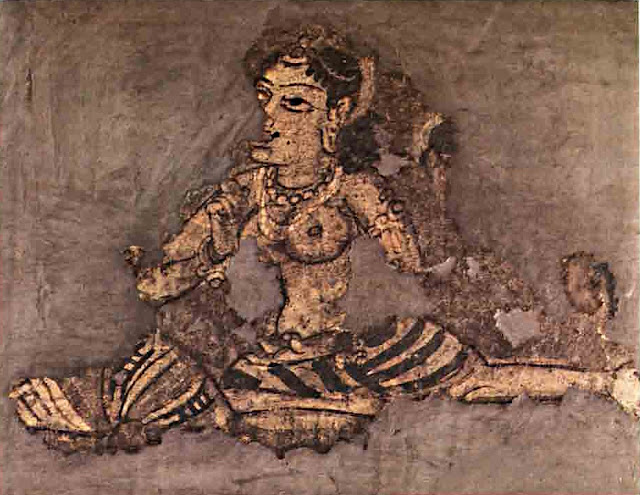 The famed wall paintings from Ajantha in India also have several paintings of Flying Apsaras. 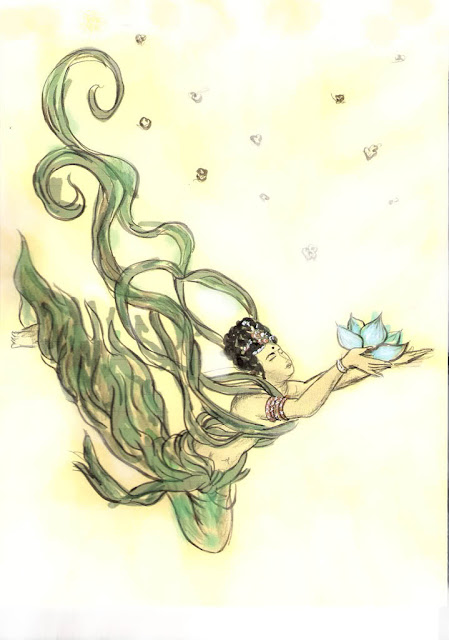 China's western most province of Xinjiang has a Muslim majority. It was earlier known as Chinese Turkmenistan and many ancient caves and burial spots have been excavated by many archeologists there including famous Aurel Stein in the twentieth century. Stein's excavations have no doubt proved that Chinese Turkmenistan was predominantly Buddhist in medieval times and was ruled by Buddhist Kings. However that was two millennia ago and now the province of Xinjiang has a majority of Muslim Uighur population.
With this kind of background, it appears to be very strange that a 18 meter tall statue was erected at the intersection of Santunbei Bahaer Road in Urumqi, the capital of Xinjiang province. A tweet on Chinese social media site Ifeng, describes the statue as “ newly completed, tallest, and largest flower-decorated sculpture ” whereas another tweet on Sina Weibo, describes the statue as “ sculpture covered with heavy makeup and colour, with silk ribbons and colorful balls hung around its body”
Inauguration of this statue on 13th August 2012 in Urumqi, drew sharp reactions from the Muslims. A Uighur Muslim businessman says that "We were disappointed that this statue based on Hindu-Buddhist theme was put up in the month of Ramazan. People are still asking, who took such an unwise decision," Even the usually reticent Chinese media remarked that “ it was difficult for some Muslim ethnic groups to accept a statue of a semi-clad woman on a major city intersection.” 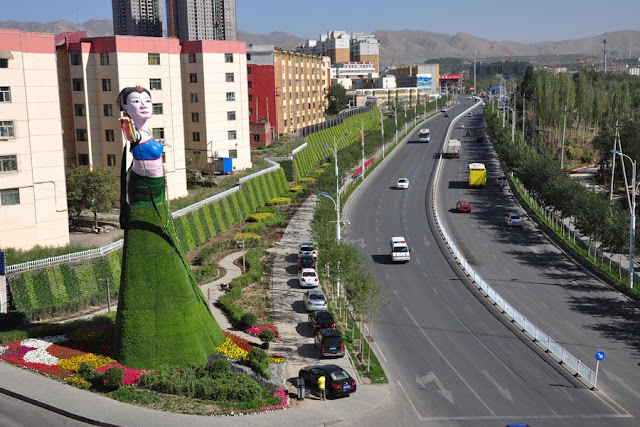 However, highest criticism of the statue came from thousands of postings on social media sites in China. I found some of the comments from Twitter alike Sina Weibo, very interesting and hilarious. I quote some of them here.
李小喵七七七:
Good thing it’s tall, [because] if were short, having to look at this face every day would scare people to death…
大眼蟹:
Looks familiar, often seen at funerals.
苎澧靥:
The city’s image has instantly become corny/kitschy~ Good.
阿光家的佐佐:
Looks like one of those paper women you burn for the dead [in Chinese tradition, people burn stuff like money, houses, cars, clothes, servants, etc. -- which are all made of paper -- for the deceased, with the idea that the deceased could use these things in their world].
薛愤愤:
It looks like a shoddy inflatable doll.
12舟舟:
Unbelievably ugly, utterly frightening.
哥们儿会武术:
From this we can see the government has truly decided to correct the real estate market… residential buildings are right next to it…
翠湖的鱼:
Leaving whether it’s beautiful or ugly aside, why are those arms so short?
SaffronVon:
It embodies the uneven distribution of aesthetic taste between the people and leaders of our country. Truly shockingly hilarious!
erikhu2000:
The Coolest Ethnic Trend
暮藍-黎益塵:
So gluing on a paper doll is art? Truly JB disgusting, it’d have been better if they had put one of those dragons made by the funeral service people instead.
蜜夜:
So ugly! This is no Flying Apsara, it’s crap.
小虎纹:
It’s not that the leader has bad aesthetic taste, but rather that the person who made this thing is probably his relative.
蓝弦小居网:
People who live in the residential buildings behind [the sculpture], do you not have nightmares at night? My deepest sympathies…
爵士马高:
“The government department responsible”? “From a professional perspective”? Could there be anything more disgusting?
瑞家dnd:
The ZF truly has more money than they know what to do with. They either support foreign countries [with the money], or they make things like this for the ordinary common people to make fun of.
Yuwkii:
Ah haha haha haha, so hilarious, it’s ugly enough, I like it!
职业广告人马震:
It proves that not only fairies can fly up to the sky, but prostitutes too.
晓月明湄pde:
Probably based on a leader’s mistress, a little plump!
李斯妥洛夫斯基:
It’s undoubtedly based on a Chongqing pageant winner.
甘万uapid:
Rape your eyes, rape your mind, maybe rape your ears, too… I didn’t drink alcohol, but I’m a little sick…
遥远阳光—:
So ugly-looking, feels like I’m in North Korea.
欣欣不然:
When Christmas comes, just cut the top half off, replace it with a star and it’s a Christmas tree, so economical!
阿拉蕾1010:
Ultraman‘s sister salutes you!
宇宙_煋之继承者:
From what planet is this aesthetic taste from?
小萌ivy:
The idea is good, but the result is tragic~
丹青阚:
…Is this used to wake up and keep driver’s alert?
( Comments adopted from http://www.chariweb.com/)
Everyone would agree that Chinese social media are not only active but also kicking. 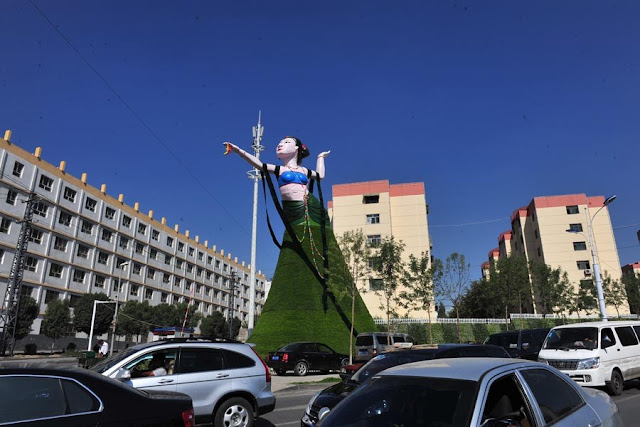 For unknown reasons, just 11 days after its inauguration, 'The Flying Apsara' of Urumqi was suddenly demolished by the local authorities, who perhaps feared resistance from the local Muslims. The statue weighing 40 tons was demolished by 20 workers, who came equipped with cranes and pick up vehicle to clear the debris.
Local officials say that henceforth they would be careful about choosing themes for future statues.
12th September 2012
at 8:52 AM