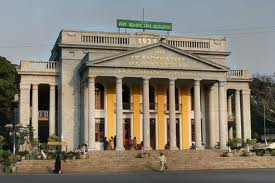 For most of local Governing bodies or Municipal Corporations of the cities in India, property taxes remain as one of the most important heads of income. However, the mechanism though which these corporations attempt to collect property tax, is very lethargic and has been made totally inefficient by the rampant corruption. With the result, that only a small percentage of the total due tax amount, gets actually deposited in the coffers of the corporations. If we consider as an example, my home city of Pune, the Municipal Corporation here has a defaulted backlog of receivable tax amounts already assessed but not yet received, of around 42.3 Million Rupees.
In the total budget of 300 Million Rupees, the property taxes are expected to contribute about 53 Million Rupees to the coffers of the Muncipal Corporation. Thus we can see that total amount receivable now is almost reaching the figure of yearly expected income from this tax. In spite of this being the situation, Pune Municipal Corporation is unable to collect this receivable amount.

Bengaluru Muncipal corpoation is a similar local Governing body with a large population staying in its jurisdiction. This corporation has been unable to recover an amount of about 400 Million Rupees from the citizens as assessed property taxes. Corporation keeps sending recovery notices to the defaulters, but the measures have been found quite ineffective as total recovery seems to growing from year to year. The Municipal Commissioner thinks that this outstanding amount has now reached such a large proportion of the total income, that the corporation has now started feeling a shortage of funds for development works and provision of facilities to the Citizens.

Bengaluru corporation has now come up with a new measure that has been found very effective yet highly noise polluting. Corporation has now appointed a troupe of drum beaters, who accompany the tax recovery officers. This troupe makes daily visits to tax defaulter individuals or companies and beat their drums right in front of the defaulter's homes or offices. The idea behind this drum beating is that everyone, who stays or works in the neighbourhood of a tax defaulter, would become aware of the default of his neighbour that he has not paid due property taxes for many years. A Municipal Corporation official says that this measure makes the tax defaulters feel embarrassed and makes them pay. “The louder the sound drums, the more is the embarrassment. “ 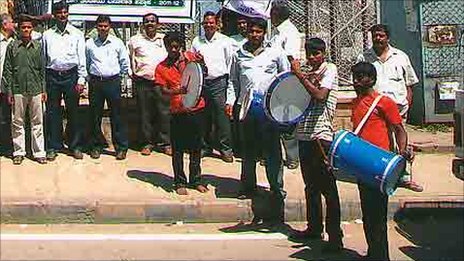 A multinational corporation has rented a huge floor space in a city building. The drums were beaten recently in front of the building, with the result that the owner of the building, the tenants and people working in neighbourhood buildings, all were quite embarrassed. The city official say that the owner of this particular building has defaulted over payment of taxes worth several Millions of Rupees and does not show any cognizance even of the demand notices sent to him. This being the case, corporation came up with this crude, uncivilized no doubt, but extremely effective measure.

The drum beaters troupe beats the drums with a particular rhythm so that everyone around becomes acutely aware of the beats. Though the people staying or working in the spot, where drums are being beaten, become embarrassed, fed up and frustrated, the passersby consider this as an effective measure.

I do not know, what Bengaluru Municipal corporation plans to do with such habitual defaulters, who refuse to take cognizance and pay the taxes even after the drums were beaten in front of their property. The only course open to the corporation perhaps is to take court orders and seal the properties .

The drum beating measure however, seems to be an effective way for recovery of taxes. The Municipal corporation in my home town can also try this, so that their tax collection improves and they can provide more amenities for us. But I sincerely wish that no one in my neighbourhood is a defaulter, because I would be peeved and irritated to hear the drums in my neighbourhood. HaHa!