Herodotus, the famous Greek traveler and historian (484-425 B.C.) has written a detailed history of the Achaemenid Kings of Persia. Just like medieval India, there were number of small kingdoms spread in what we call Iran today. Persia was just one of the small kingdom of that era. The Kings of this kingdom are known as Achaemenid kings because of the name of a king who ruled there much later. During 557-530 B.C. this kingdom was ruled by a King of this royal family, who was known by the name of Cyrus. He was an extremely capable general and had captured most of the small states around his kingdom and has made them his vassal or feudatory kings. He had even crossed the Khyber pass to the east of his empire and had captured the kingdom of Gandhar, which was essentially located between Khyber pass and the Indus river. In the west, his army had reached up to Babylon in present day Iraq. The way he had expanded boundaries of his kingdom is very similar to what King Chandragupta Maurya had done in India. Because of this, he is known as the true Monarch of Iran.

Herodotus has described the complete history of Cyrus in his writings. I recently came across the birth story or fable of Cyrus's birth as described by Herodotus. What struck me most was the striking similarity between this story and the story of birth of India's greatest folk hero “Krishna.” Even the names are somewhat similar, when you pronounce the name Cyrus properly. The correct pronunciation, according to my information happens to be “Kourush” or “Kurush” which is so similar to Krishna.
Let me first describe to you the birth story of Cyrus. 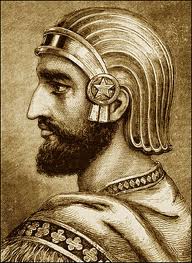 Cyrus the Great
Astyages was the king of a small kingdom known as Medes, located roughly northwest of Persia. This King Astyages had a daughter named as Mandane. One night King Astyages had a dream. In this dream, he saw a vast body of water originating from the body of his daughter Mandane with his entire Kingdom getting flooded and being carried away in that water. King Astyages referred his dream to his Royal astrologers, who gave an interpretation of this dream that Astyages's kingdom would be snatched away by a son, whom Princess Mandane would give birth to in future. King Astyages now got really worried. After much thought, he got his daughter Mandane married with King of Persia, Cambyses, who was considered to be much inferior to him. One year after marriage, Mandane became pregant. At that time King Astyages had another dream. In this dream he saw a huge vine growing out of Mandane's womb and spreading over his kingdom as well as complete Asia, as it was known then. The Royal astrologers once again interpreted this dream as likely destruction of Astyages's kingdom by Mandane's yet to be born son.
Now extremely worried. Astyages called his most trustworthy knight Harpagus and gave him the assignment of killing Mandane's child as soon as delivered and called his daughter back to his palace to carry out this task without any difficulty. In due course Mandane delivered a male child. Harpagus snatched away the new born child from the bereaved mother and dressed the child in ceremonious clothes, which were to be worn by any one to be executed. However after this, his hand started trembling and he found himself incapable of carrying out the execution of that new born child. He handed over the child to the keeper of the Royal herd Mitradates, who took the child to his home. By coincidence, Mitradates's wife Kyono. who was carrying a child, had just delivered a still born baby. Bereaved Kyono requested Mitradates to hand over Mandane's child to her and return the body of her still born child to King Astyages. The king now became care free unaware that his grandson was actually growing up at the house of the chief sheaphard of the Royal herd. Mitradates named Mandane's child as Cyrus.
12 or 15 years later, when Cyrus grew up, King Astyages found out the truth. For disobeying his orders, he ordered that Harpagus's son of the same age as that of Cyrus, should be executed and sent Cyrus to his parents in Persia. Later when Cyrus ascended the throne of Persia, revengeful Harpagus dethroned King Astyages with the help of King Cyrus of Persia.
Now let us turn to the story of the birth of the extremely popular folk hero of Hindu religion, Krishna, which I have taken from 'Wikipedia' 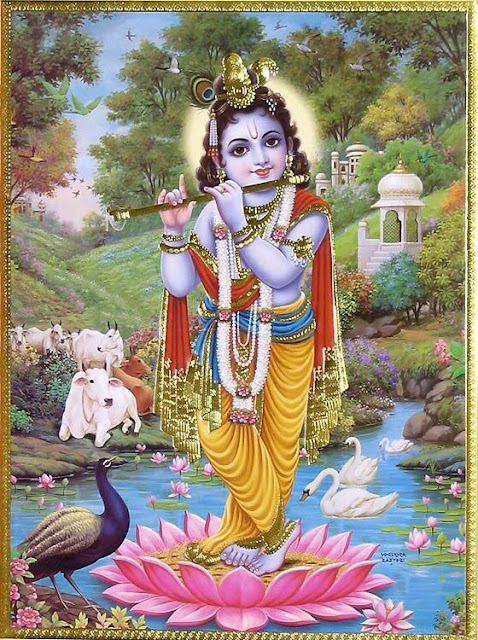 Krisha as a small child
“ Mathura was the capital of the Yadavas, to which Krishna's parents Vasudeva and Devaki belonged. King Kansa, Devaki's brother, had ascended the throne by imprisoning his father, King Ugrasena. Afraid of a prophecy from a divine voice from the heavens that predicted his death at the hands of Devaki's eighth fetus, Kansa had the couple locked into a prison cell. After Kansa killed the first six children, Devaki apparently had a miscarriage of the seventh. Once again Devaki became pregnant. Now due to the miscarriage, Kamsa was in a puzzle regarding 'The Eighth One' but his ministers advised that the divine voice from the heavens emphasised the eighth fetus and so this is the one. That night Krishna was born and since Vasudeva knew Krishna's life was in danger, Krishna was secretly taken out of the prison cell and taken to the a chief of cow herders, 'Nanda' in a place called Gokul. By coincidence his wife Yasoda was pregnant and had delivered a child. Nanda replaced his own child with the one brought in by Vasudeva and sent back his own new born child to King Kansa, so that he could execute him. Nanda was the head of a community of cow-herders, and after this, he settled in a place called Vrindavana. Krishna grew up as a cow herder. On his return to Mathura as a young man, Krishna overthrew and killed his maternal uncle, Kansa. ” 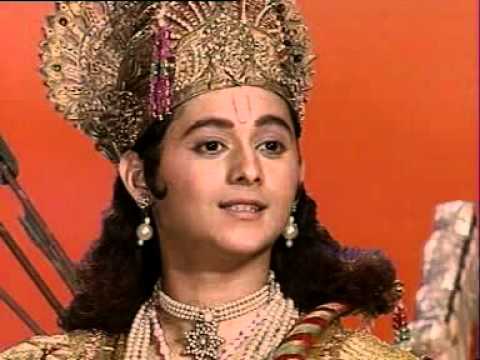 Krishna portrait from a popular TV serial
If we interchange Astyages with Kansa, Mandane with Devaki, Mitradates with Nanda and Kyono with Yasoda and also Davaki's (Mandane's) relationship with Kansa ( Astyages) as daughter instead of sister, both the stories are just the same except for some irrelevant details. So we have two identical birth stories for two popular folk heroes each supposed to be born on either side of the Hindukush mountains; one in Indian subcontinent and other in central Asia. It is impossible to tell whether Indian tale went to Persia or vice versa. Or possibly both originated from some other ancient folklore.
Cyrus and other Achaemenid kings were fire worshipers with Avesta as their scripture and Zarathustra their prophet. Their God was known as Azura Mazda. The Hindu religion on the contrary, worships idols and has no prophet. Even then, the similarity between names and birth-stories of these two folk heroes is indeed very remarkable no doubt.
9th September 2012
at 9:05 AM