A century of sorts 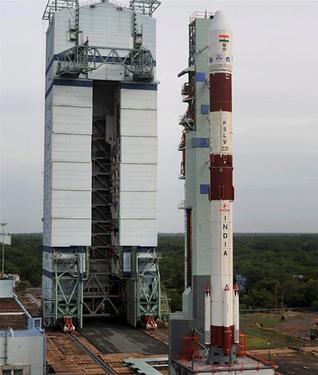 There was an expectant hush in the visitor's gallery at the Satish Dhawan Space Centre in Sriharikota, 100km north of Chennai, India, on the morning of 9th September 2012, as everyone sitting there, including the prime minister of India, anxiously watched a large TV screen in the front, showing a huge rocket standing there on its launch-pad. The launch was scheduled for 9.51am, but there was a delay of two minutes as rocket's Inertial Navigation System, which keeps the rocket on track and helps it to put satellites in orbits with pinpoint precision, relayed an alert of a possible collision with space debris. Finally, just before 9-53 AM, mission director Kunhi Krishnan, sitting before a computer in the launch control room, gave a go for launch of a historic space mission after ensuring that all systems were go for the launch.
Within seconds, as the count down went on, a small fire was seen lit at the bottom of the huge rocket and which in a fraction of a second, developed into a massive orange ball of fire. The rocket, code named C21, then rose majestically with a deafening roar as if on a chariot of fire, rock steady and erect, slowly first and then gathered speed and before blink of an eye, lifted off with a thick orange flame, powering its upward spiralling journey. As the mighty rocket lifted off, a huge round of applause broke in the control room and also amongst hundreds of spectators and media persons gathered in the terraces of buildings at this vast spaceport. With this launch, India's 100 the space mission was on its way.
India is crazy about cricket and in this game the word century is considered some kind of panacea. A player who manages to get a century of runs, automatically becomes a super star. Such is the power of this word. This space mission carried out by India's space research organization or ISRO was historic and important because it completed a century of space missions, which include the rocket launches and satellite launches. In last 49 years, since its inception, ISRO so far has built 62 satellites and flown 37 launch vehicles, making it to 99 space missions. Thus the rocket launch on 9th September 2012 completed 100 space missions or a century and that is why this mission was so important and historic.
Actually, this was just a commercial launch with pay load consisting of a French satellite weighing more than 720 Kg and a Japanese small satellite. ISRO does not take into calculations foreign payloads or launches made from outside India. Thus this mission was considered as single space mission because of the foreign payload.
ISRO calls this particular rocket as Polar Satellite Launch vehicle or PSLV. This rocket, weighing more than 230 tons and with a height of 44 meters is considered the power horse and a star performer of ISRO with more than 20 successful missions so far. PSLV requires a 51-hour countdown and several run up jobs which include filling liquid propellants in the second and fourth stages of the launch vehicle, checking the rocket, spacecraft and batteries on board and finally pressurizing the fuel tanks on the satellites. 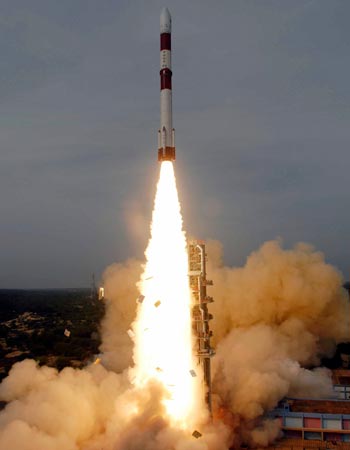 As the rocket disappeared into sky, control launch center had few anxious moments, when the trajectory on the giant screens at the mission control room showed the rocket's blip deviate slightly mid-flight, but got corrected later and after 17 minutes and 49 seconds, the first satellite, France's SPOT-6, was injected into orbit. Seconds later Japan's Proiteres was in place.
ISRO had launched its first space mission, way back in 1975, when its first satellite “Aryabhat” was launched by the Soviet Union on 19 April 1975 from Kapustin Yar launch base using a Cosmos-3M launch vehicle. The satellite, shaped as a 26-sided polygon with 1.4 m diameter, had lasted in space for just 4 days, when a power failure halted all experiments on board. All signals from the spacecraft were lost after 5 days of operation.
ISRO has come a long way since then but is still way behind China in rocket technology. China's rockets have the capacity to carry payloads up to nine tonnes. ISRO' s heavy lifter GSLV rocket can carry only up to 2 to 2.5 tonnes. Leaving that aside, the PSLV launch of 9th September establishes ISRO as a major player in the satellite launching business, which started in 1999 as an additional baggage when ISRO launched India’s own satellites. So far, ISRO has launched 27 foreign satellites and the two of Sunday’s total takes up its tally to 29.
ISRO is also a major player in the remote sensing satellite data market. ISRO has in the space the largest number of remote sensing satellites that send back imagery in a variety of spatial resolutions. ISRO has as many as 12 earth observation satellites circling the earth which makes it a leader in remote sensing data market.
10th September 2012
at 9:01 AM