A case for Mandarin 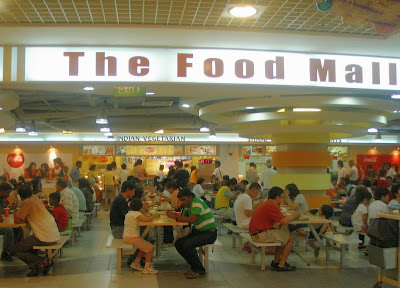 Few days back, I was having lunch with my family in one of those restaurants, which specializes in Italian origin dishes, like Pizza and Pasta. This restaurant chain is fairly popular here in Singapore and is always crowded. On that day, I found that the place was really jam packed due to the on going school holidays. We waited patiently for our turns and finally managed to get a place in a corner. Just behind us, there was a group of about 8 or 10 Ethnic Chinese boys and girls, merrily chitchatting as only kids of that age can do. I presumed that they were talking in Mandarin as to me their babble was totally incomprehensible. I was watching them as well as my grand daughter (Age 5) enjoying their food. Next, I was bit surprised to see a sudden frown of anger on my grand daughter’s happy face. She turned her head and looked angrily towards the babbling kids and then mentioned something to her mother. The kids on the next table got the message from her angry looks. Suddenly, they became quiet for about a second and then renewed there talk again. Needless to say, I failed to understand the cause and reason of her frown and also why the kids suddenly became silent. Later I asked my grand daughter about her sudden unhappiness. She told me that those kids sitting next to us, during their babble, had used some words, which her Mandarin teacher had told them were considered impolite and should never be used. Obviously I was totally blank about the whole incident as I do not understand even a speck of Mandarin.
Such kind of incidences can happen with any language. During my business years, I used to shop for Electronic components from the Lamington Road area market in Mumbai. The retail businesses all around this area were taken over from the traditional Gujarati traders by upcoming Sindhi traders. While these shop owners would happily chat with me in my mother tongue Marathi or in Hindi or in English while settling the deal, when they needed to refer to someone else in the shop or on telephone to some other trader across the road to finalize the price or find out if someone else has the stock, they would switch to a unknown dialect of Sindhi language which apparently only they knew. This always blanked me and I always kept on feeling that somehow I was being cheated in the deal. Later I found a trader who was not Sindhi but knew this dialect. My suspicions and doubts were found true when even after paying this guy a commission of 5% , the prices I got for my purchases were much lower than my previous direct purchases. Such is the power of knowing the language of your opposite party, when agreeing upon on any deal.
Whether we like it or resent it, there is no escape from the fact that, speaking globally, we just can not avoid China. To have good commercial relationship with China is an imperative necessity of the times. India-China trade has already crossed 60 Billion and many Chinese companies(e.g. Huawei Corp.) want to or are in the process of setting up huge factories in India for Indian markets. China also happens to be our neighbour. In his masterpiece treatise on state administration, “Arthashastra”, the great statesman of medieval India, Arya Chankya has said that for any sovereign state, the neighbouring states would always be either friends or foes. The basic tenet of any Sovereign state should always be to watch the neighbouring states vigilantly at all times. This basic tenet remains true even today. China is growing at an alarming rate and would soon become an extremely powerful state. India also has an unresolved border dispute with China, which is unlikely to be resolved any sooner. To maintain good relationship with such a powerful country is always a headache for the neighbours. Such states tend to behave in a very arrogant and rough fashion with other countries as witnessed in the recent spat between China and Japan. No one could have even imagined such arrogant behaviour with a country like Japan. To top it all, China has a communist, nondemocratic and autocratic regime. Whenever top Chinese leadership takes any decisions, there is really no one to question them.
All this means that India’s interaction with Chinese, is bound to increase and become deeper and deeper in coming years. China is a huge country. I have read somewhere that there are more than 100 individual dialects in China. This seems quite possible, considering number of languages and sub dialects we have India. However all official business with China is done in Mandarin. This is greatly advantageous to us as learning just one language gives us understanding of such a vast country. In India, one would have to learn 14 or 15 different languages to achieve that. It is my sincere belief that learning Mandarin is the need of the hour.
India's Human resources development ministry has been trying to push for widespread reform in India’s education sector. At the beginning of this year, they introduced a major reform in India’s Central Board of Secondary Education (CBSE) regarding evaluation of students. The students appearing for their school finishing examinations are now given grades instead of marks to indicate their performance at the exams. Many educationists had realized that there was not much difference in intellect or depth of knowledge of students who got marks at this examination differing may be by 10 or 20 points. The marks system only enhanced the rat race and unfair practices. The over emphasis placed by everyone on marks, also meant a plethora of private tuitions and tuition classes coming up, which simply were money spinning machines. With grades, it is expected that parents would not feel need for these extra coaching classes and would bring relief to parents and students.

This ministry is now planning to introduce Mandarin as a subject in the curriculum for CBSE, right from primary levels. They however realize that the main obstacle to this teaching of Mandarin, is the total unavailability of competent Mandarin teachers in India. During recent visit of an high official to China, the Chinese side has agreed to a two-way programme that can be worked out to train about 200 teachers. Some of them can go to China to learn and others can learn in India through different methods. China also has agreed to extend its sponsorship programme to exchange scholars from universities in different subjects on the lines of Full Bright Scholarship. There is also a plan for joint meeting of Vice-chancellors from both countries later this month. Since an estimated 60 per cent of India’s 1.2bn population is under the age of 25. India’s “demographic dividend” could help the country dominate the global services industry and, in the future, export talent to countries with aging societies. While many Indians speak English, knowledge of Mandarin would give them greater international competitiveness. India could at a stroke increase massively the number of the world’s Mandarin speakers.
Many Indian schools teach at present, French and German as fourth language. At university level, Spanish is also taught. There are almost no facilities anywhere in India to teach Mandarin. Since most of the educated in India are fluent in English, if they acquire language skills in Mandarin, it would give them greater international competitiveness.
I am was quite delighted with this plan. It is a common knowledge that teaching a foreign language can be best done at an early age. In my grand daughter’s class, there are many boys and girls who are ethnic Chinese. In Singapore, very few elderly ethnic Chinese people can speak Mandarin well as they mostly speak in their native Hokkian. My grand daughter is therefore at the same level of ignorance along with her ethnic Chinese friends. It gave me great pleasure when her mandarin teacher told us that she has picked up the language just like other ethnic Chinese kids. If more and more of Indian kids start learning Mandarin at an early age, we would have a new generation of Indians who would be fluent in Mandarin besides English, Hindi and their mother tongue. This would place them in a position of tremendous advantage to find jobs in service industry round the world.
Some people have criticized this plan as a nonsense. They feel that if Chinese are not willing to learn Hindi why should we learn Mandarin? In the first place, who has told them that Chinese are not willing to learn Hindi? Chinese would do anything to expand their business and the markets. I would suggest that these people travel to small shops in India’s bazaars and find out the range of Chinese goods. From the Indian flags, which our kids wave on Independence and Republic days to small plastic Hindu Idols, everything is made in China. Is it possible to get such detailed market information throughout India without knowing the local languages? Obviously Chinese middlemen who know the markets have already enough knowledge of Indian languages, customs and rituals. Besides, since 14 or15 languages are spoken in India, learning Hindi does not give any special advantage to the Chinese as English remains and would remain the language that connects India. It is obvious that a Chinese knowing English language can move around and learn anything about India. For Indians, there is no such choice. We have to learn Mandarin if we wish to learn more and understand China and Chinese people.
I feel that acquiring minimal basic knowledge of Mandarin is a must for the new generation Indians.
at 9:20 AM