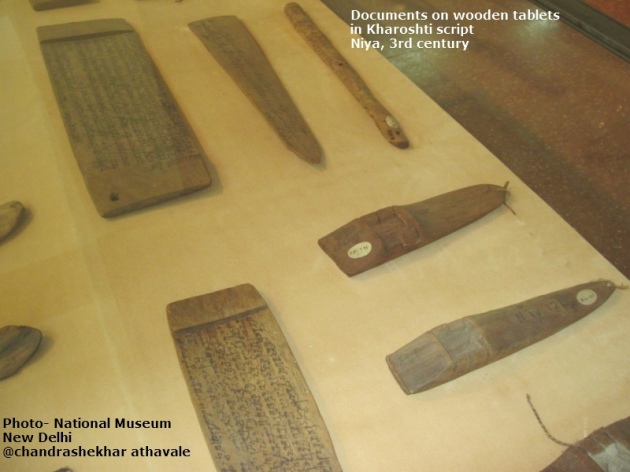 After discovery of such large number of wooden slates, which looked very similar, Aurel Stein was worried that they may be copies of the same text containing either a prayer or few lines from some Buddhist scripture. However after studying the slates, Stein soon realized that each and every of those slates had a different content. Since Stein was fairly familiar with documents written in Kharoshti script from Kushana or Indo-Scythian (30 to 230 CE) period from northwest India, Stein was immediately able to confirm that the Kharoshti script on the slates, was very similar to Kushan period inscriptions, which meant that the slates belonged to a period between first to third century CE. 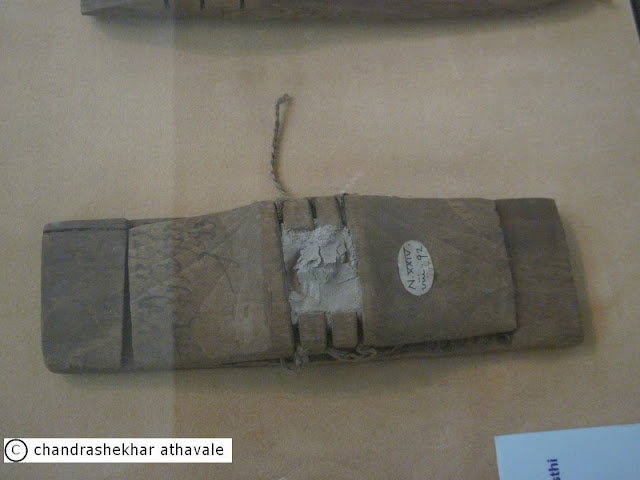 Stein found it difficult to decipher the script on the slates at the site of the ruins, where he discovered them, because the script was written in a sort of Cursive writing. However, he managed to decipher some of the slates on his camp in the evening. All the slates were basically written in the Prakrit language, extremely popular and wide spread language of the Indian peninsula during those days. Many of the slates, which looked like a knife blade, had words “ Mahanuava Maharaya lihati” or “His Highness the Maharaja writes” scripted at the header. Because of the use of these words, Stein concluded that these slates contained messages sent by the King's court in Hotan. By that evening, Stein was successful in deciphering the text written on 3 slates, which had least amount of writing. The text on these 3 slates clearly indicated that they contained administrative orders issued by the state. One of the three slates was addressed to Sothamga Lipeya alone, and directed him that Cuvayalina Phummaseva going as, messenger to Khotana should be furnished with certain transport and supplies. More elaborate orders were called “Anadilekha” and some messages were named as “Kilamudra”, which perhaps had different kinds of meanings. Since word “Khotana” appeared on many slates, Stein presumed these to be orders from the royal court.
Even though, all the slates were dated, since the date era had began with the reign of the king, not much information could be derived from the dating. Stein found that the King was addressed as “Devaputra” or “Son of God” in the slates. Similar references for the Kings are very commonly found in Inscriptions of Kushan or Indo-Scythian or even later dated periods in India. 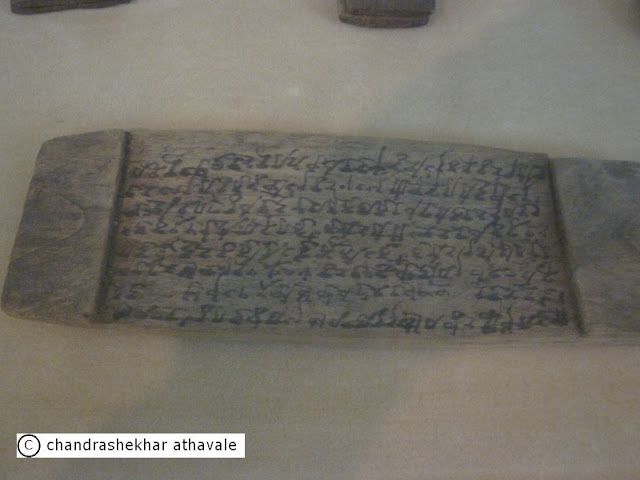 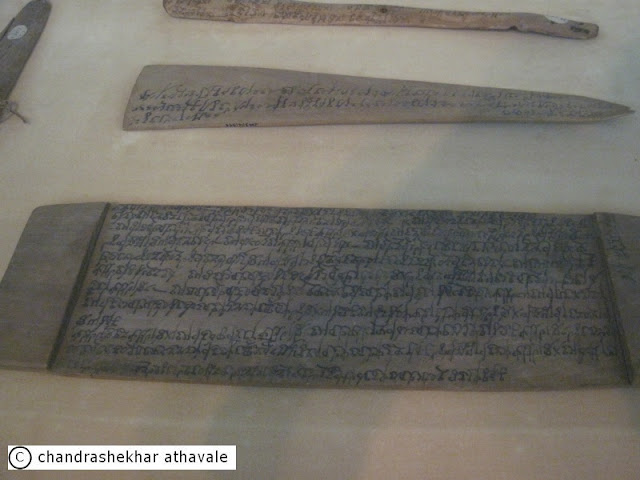 Stein found another interesting fact in the texts. All the texts had a briefness and frankness of the Sanskrit texts, which are always found to the point. Stein observes that none of the texts had long addresses, lines inquiring about the health and the welfare of the recipients and the mandatory formal lines used by English letter writers. 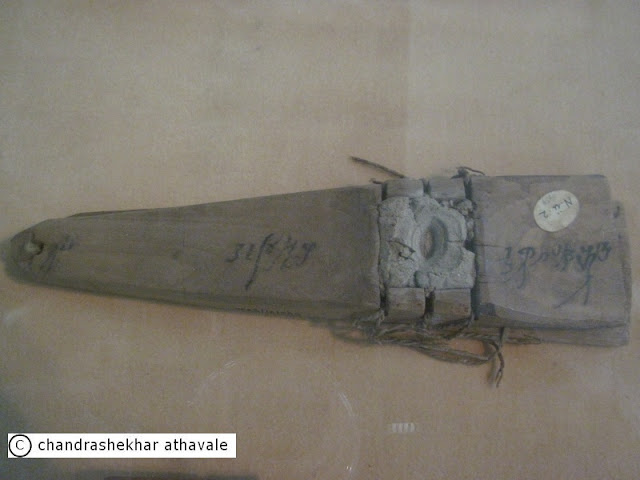 After he returned from the expedition. Aurel Stein requested some of the epigraphists in England to give their opinion about the contents of the texts. After receiving their expert comments and with his own observations, Stein came to following conclusion.
“ Discovery of the Kharosthi documents from Early use at the Niya Site, proves beyond all doubt, that an Indian language closely allied to the old language of Prakrit of North-western India, was in daily use for administrative purposes throughout the Khotan and Khotan region, about the middle of the third century A.D. Considering the character of these hundreds of documents, dealing with all the varied affairs of practical life and social organization, it is impossible to assume that their language should not have been widely, perhaps universally, known within the territory. The conclusion to be drawn from this current use of an Indian language is greatly strengthened by the Kharosthi script of the records ; for we know that within India this script was peculiar to that region of which Taxila and the adjoining Gandhara were the historical and cultural centres for centuries before and after the commencement of our era.”
Stein mentions further that
“Neither the language nor the script of these documents can be satisfactorily accounted for by the spread of Buddhism alone, which, so far as our available evidence goes, brought to Central Asia only the use of Sanskrit as its ecclesiastical language, and the writing in Brahmi characters. But the current use in Khotan of both a Prakrit dialect and of the Kharosthi script becomes at once intelligible if we recognize a substratum of historical fact in the old local tradition heard by Hsiian-tsang, which asserted a partial occupation of Khotan by Indian immigrants from the region of ancient Taxila. “
Even though most of the experts agree that some of the residents of Hotan were definitely migrants from the Indian Peninsula, there is a wide disagreement amongst them, regarding fixing the exact time period in which these Indians had migrated to Hotan and the route by which they might have made this migration. There are three schools of thought.
According to XuenZang himself, he thinks that this migration must have taken place much before the spread of Buddhist religion in Chinese Turkmenistan(Xinjiang). He gives reference of a hand written Tibetan manuscript known as ' Annals of Li-Yul', which says that Hotan's king “ Vijayasambhava” was initiated in Buddhism by a monk named “Arthaveersena”, who had come from Kashmir. This initiation was done 170 years after the establishment of the Kingdom of Khotan. Emperor of western China, Wu-Ti had defeated the Hotan king somewhere around 269 CE. The date of establishment of the Kingdom of Hotan by the Indian migrants therefore works out to first or second century BCE. XuenZang also gives another old story, heard by him in Taxila (Capital of Gandhar) as a reference. According to this story, Governor of Gandhara and Emperor Ashoka's son “Kunal” was blinded by his step mother in a palace intrigue. When emperor learned about this, he immediately arrested all those responsible for this plot and dispatched all of them to the cold deserts beyond the eastern borders of his empire. Xuen Zang says that these disbanded plotters must have managed to reach Hotan and establish their new kingdom. According to this story, this migration happened during life time of Emperor Askoka or 3rd century BCE.


Stein considers another possibility in his book. He says that since residents of Hotan look very much like residents of Kashmir, they might have migrated from Kashmir and established the Hotan Kingdom. However it is extremely difficult to predict whether these migrating Kashmiri people travelled to Hotan through Karakoram pass or through Gandhar border. Only one thing can be said firmly. Since Buddhist monk “Arthaveerasena” had visited Hotan during reign of King “ Vijayasambhava” for promoting Buddhist religion teachings. There must have beeen a close relationship between Kashmir and Hotan Kingdom.
In the 1988 issue of a publication, published twice in a year and called Central Asiatic Journal, a Harvard historian Douglas A Hitch has put forth a totally new theory. According to this theory, the entire Tarim river basin was under control of Kushan or Indo-Scythian kings in the period 88-90 to 124-127 CE. The armies of Kushan emperor Kanishka and his son Huvishka were present in this region. Since Hotan Oasis is part of Tarim river basin, it was naturally ruled by Kushan kings. Hitch claims that the discovery of letters written in “Kharoshti” script in ancient towns like “Kara Shar” and “Turpan”, which are located on the northern silk route and use of Prakrit language in the inscription on ancient coins of Hotan indicate that entire Tarim river basin from Kara Shar in the north to Lu Lan in the south was part of Kushan or Indo-Scythian empire, when it was at its strongest. It is possible that emperor Kanishka or his son Huvishka might have sent their armies to Tarim basin over the Pamir mountains to capture this region. Han dynasty of China probably defeated Kushan armies by second half of the second century CE. Even then, all the kings in this region have been following the Kushan traditions for a number of centuries afterwords. Their administration language was still Prakrit and they invariably called themselves as “ Devaputra” or “Son of God”. 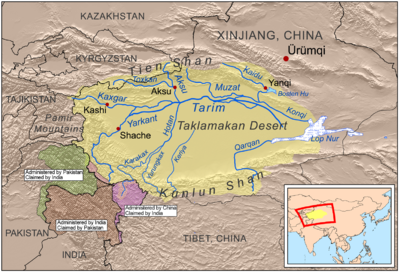 We may never know the real historic truth ever. Whether Tarim river basin in Xinjiang province of China, was a part of Kanishka's empire? Or whether Hotan was part of Kashmir? We shall never know. One thing can be however said with almost certainty, that Karakoram mountain range was not necessarily eastern border of the empires of medieval India. To what extent these empires made in road into Tarim river basin? May remain an unknown forever.
(Concluded)
References