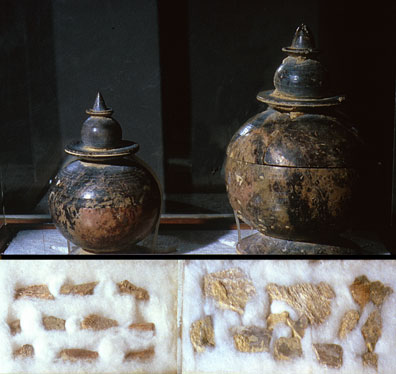 When William Caxton Peppe excavated the Piprahwa Stupa in 1898, he had found along with the urns carrying Buddha's relics, many other objects. I have mentioned about these objects earlier. But let me recollect these here again for quick reference.
The urns besides the Buddha relics, also contained ornaments in gold, gold beads; impression of a woman on gold leaf two inches long, another figure in gold leaf naked ; a large circular piece of rather thicker gold leaf, scrolled on the outside, the impression of an elephant on gold leaf, several pieces impressed with a lion, with trident over his back and the Buddhist cross in front ; several pieces with the impression of the Buddhist cross; one piece of solid gold 3/4 inches by 1/2 by 1/3 ; quantities of stars or flowers, both in silver and gold, with six and eight petals. Pearls of sizes, many welded together in sets of two, three, and four. Also quantities of flowers or stars, leaves serrated and veined, Buddhist tridents, pyramids, pierced and drilled beads of sizes and other shapes cut in white and red cornelian, amethyst, topaz, garnets, coral, inlaid stones, and shells. There is one bird cut in red cornelian and one bird in metal. We have seen earlier that Peppe had donated the urns with the relics to Indian Museum at Kolkata and these can be seen there even today. No one knew about the whereabouts or whatever happened to other archeological treasures in the Urns till one day, some of them just resurfaced in London.
On a Friday afternoon in June 2003, General secretary of the Buddhist Society of London, Paul Seto, along with Philip Trent, an antiques dealer, was making a routine inventory list for insurance purposes of all the artifacts held by the society. While checking the contents of a display cabinet, Paul Seto noticed a shabby cardboard box kept between the bottom shelf of the cupboard and its base. The box was seen only because he was sitting on the ground and would have been hidden for any one standing near the cabinet. Inside the box there was a jumble of all sorts of medals and badges belonging to a British Judge, Christmas Humphreys, who was the founder of the Buddhist society of London. Paul Seto noticed another smaller cardboard box of about 3 inches square size. On the cardboard lid of the box, someone had written two lines in perfect Victorian English, proclaiming the contents of the box. Paul Seto was stunned, when he read “Relics of Buddha. From the Piprawah Stupa, Birdpore Estate, Gourkhpur NWP, India. 1898.” written on the box. He carefully opened the box and just could not believe, what he saw there. Inside the box there were tiny 12 compartments. Each compartment held a tiny and exquisite object. The box contained: eight-pointed flowers and beads made of sapphire, cornelian, amethyst, ruby and rock crystal, a tiny pearl-like object, and a larger object that appeared to be three pearls fused into one.
Seto asked his colleagues at the Buddhist Society about the box, but nobody had known of its existence. He became a possessed man from that instant and could not think of anything else. Using Internet, he soon found out the full story of William Peppe and his excavation at the Piprahwa Stupa. He knew that he would not be able to find peace again till whereabouts of all the archeological treasures found by Peppe would be known to him. He thought that if William Peppe had any relatives still living in England, they might be able to help. He sent 20 cold-calling letters to everyone he could find having a surname Peppè. Only one reply came from a man called Mark Peppè, who told him that his cousin Neil was the grandson of William Claxton Peppè. 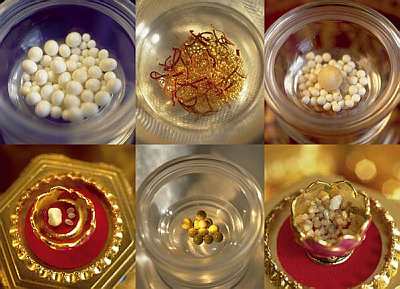 On July 29, 2003 Paul Seto finally got a call from Neil Peppè, a retired model maker for television. He off course had no idea about the box with Buddhist Society but casually told Seto that he still has in his house a couple of cases of similar pieces, along with plaster casts of the burial urns and what looked like some petrified rice from the Piprahwa stupa. These are lying in a cabinet in his sitting room. He also had original photographs of the dig at Piprahwa and of the coffer. Seto fixed an appointment with Neil Peppe and visited Peppè’s Suffolk home and found a cache of exquisite gold stars, finely worked leaves, delicate jewelled flowers, minute pyramid-shaped gems, seed pearls, small pieces of coral, coiled silver wire, tiny Buddhist symbols and gold-coin impressions. The objects had been in Neil Peppè’s family since his childhood and nobody had ever shown much interest in them. Neil Peppè now plans to loan the rest of the treasures to the Buddhist Society, but after knowing the true worth and value of the treasures, he has placed them in a bank vault for safekeeping.
The story of Piprahwa Stupa and the relics is now complete, except for a nagging doubt. When the original relics from 5th century BCE, were deep down there, who could have placed more relics along with other valuables on the top in the 3rd century BCE. The only possible answer that I can think is that the Stupa must have been enlarged and renovated in the 3rd century BCE. At the time of solemnizing the Stupa, some one of great influence must have added these objects to the Stupa. The only person I can think is Emperor Ashoka, who had gone around all the places connected with Buddha's life and erected sandstone pillars at each of these places. Xuen Zang's travelogue mentiones about a pillar near Piprahwa stupa also. It seems very likely that the great emperor himself might have placed the top layer objects inside Stupa, which were found by William Peppe in 1898.
(This post (No. IV) is based on a news story published in Sunday Times (London) dated 21 March 2004)
References:-
1. Fa-Hsien's Reccord of Buddhistic Kingdoms by Legge
2. Buddhist Records of the Western world by Beal
3. Archaeological Excavations at Piprahwa and Ganwaria
and the Identification of Kapilavastu, by K. M. Srivastava
4. The Ancient City of Kapilvastu-Revisited
- Swoyambhu D. Tuladhar
(Concluded)
30 August 2012
at 8:31 AM