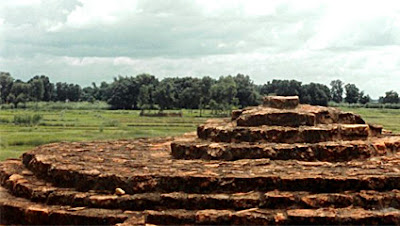 Notwithstanding the objections raised by Dr. Anton Führer, the Buddhist world was thrilled with Peppe's discovery and welcomed the Buddha relics. It appears that Dr.Führer was quickly unmasked by a British magistrate, who himself had a stake in the excavation and turned out to be a fraud. The great stone coffer and its caskets found by William Peppe at Piprahwa, went to the Indian Museum in Kolkata. After hearing about the discovery, King Chulalankara or Rama V of Thailand requested the Indian Government to share Buddha relics with them. Lord Curzon, a British viceroy of India then presented a portion of the Relic to Thailand. King Rama V sent Phraya Sukhum Naya-Winit as the Thai representative to bring in the Buddha Relic. Then Buddhists from Japan, Burma, Lanka, and Siberia also began to request for a share of the Buddha Relic. His Majesty distributed the Relic accordingly. The Buddha relics were installed at the Stupa of Phu-Khao-Thong, Wat Srakessa on the top of golden mount, Bangkok in 1899.

Even though Dr. Anton Führer's real motives were unmasked and he was found to be a fraud, Archeologists from Nepal, who were most unhappy with this discovery of Buddha relics and the assumption that the location of Kapilvastu was near about Piprahwa in India, took up the cue from Führer and refused to accept William Peppe's discovery as true relics of Buddha. They had one historic evidence, which disfavoured Piprahwa being the real Kpilavastu.

No part of ancient Indian history can be vouched as true, unless there is a confirmation of the same from travelogues of either of the two Chinese travellers, who had travelled to India in 4th and 7th centuries. Such is the importance that is attributed to the texts written by Fa-Hsien in A.D. 399 and Hiuen Tsang in A.D. 629. Out of these two, the earlier traveller Fa-Hsien describes Kapilavastu in these words. (Beal translation)

“ Less than a yojana to the east from this brought them to the city of Kapilavastu; but in it there was neither king nor people. All was mound and desolation. Of inhabitants there were only some monks and a score or two of families of the common people. At the spot where stood the old palace of King Suddhodhana there have been made images of the prince ( Goutam Buddha) and his mother; and at the places where that son appeared mounted on a white elephant when he entered his mother's womb, and where he turned his carriage round on seeing the sick man after he had gone out of the city by the eastern gate, topes (Stupa) have been erected. “

About Lumbini Fa Hsien has been very specific, when he mentions that;

“Fifty le east from the city was a garden, named Lumbini”

This observation unfortunately does not match with the account of Xuen Zang, who travelled in that region about 230 years later. Xuen Zang has described all the places connected to Buddha's life story in Kapilvastu, extensively, Finally he says: (Beal Translation)

“ Outside the south gate of the city, on the left of the road, is a stupa ; it was here the royal prince contended with the Sakyas in athletic sports (arts) and pierced with his arrows the iron targets. From this 30 li south-east is a small stupa. Here there is a fountain, the waters of which are as clear as a
mirror. Common tradition has called this the arrow fountain (Sarakupa). To the north-east of the arrow well about 80 or 90 li, we come to the Lumbini garden.”

From Xuen Zang's description, it appears that he went about 30 Li to the southeast to reach the arrow well. From this well he went about 90 Li north-east to reach Lumbini. Some of the archeologists like Dr.Fuhrer (1897) and P.C. Mukherji (1899) suggested that a village called Tilaurakot, in the district of Taulihawa, in Nepal, could be site of Kapilavastu, because it matched the distances given by Xuen Zang. Tilarakot has a large ensemble of structures, which can be matched with Xuen Zang's description. This supported Tilaurkot’s case. No satisfactory solution could be found and the archeologists continued to have disagreement about the true Site for Kapilavastu.

After Indian Independence, the dispute continued. Nepal commenced a series of excavations in 1960's and found more structures around Tilaurakot, but failed to locate any relics. In 1962, Mrs. D. Mitra of the Arachaeological Survey of India led another expedition of exploration and excavation in the Nepalese tarai. During the course of her work, she excavated at Kodan and Tilaurakot, but could not find any evidence identifying Tilaurakot with Kapilavastu. 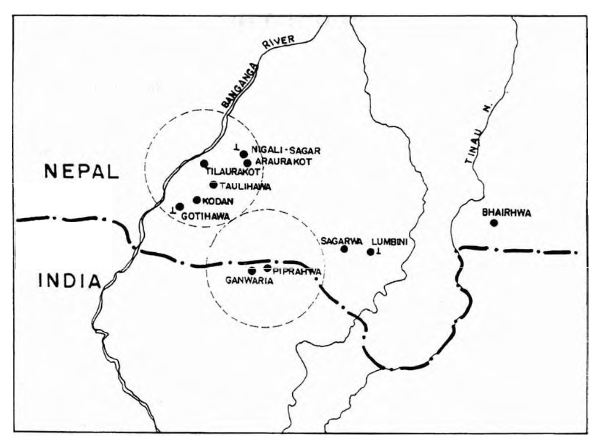 The Nepalese arguments are essentially based on two stone pillars supposed to be erected by Emperor Ashoka. At Niglihawa, a place about 8 KM northeast of Tilaurkot, a pillar erected by Emperor Ashoka was discovered. The lower part of this pillar bears an inscription testifying this site as the birth spot of the Kanakmuni Buddha. (Not Goutama Buddha, who is also called as Shakyamuni Buddha.)

Another broken pillar was also discovered at Gotihawa about 5 km southwest of Tilaurkot. There is no inscription found on the pillar stub that is left. This site is supposed to be the birth place of Krakuchhanda Buddha.

Xuen Zang describes both these places along with the Stupa where Buddha's relics have been preserved in these words.

“ To the south of the city (Kapilavastu) going 50 li or so, we come to an old town where there is a stupa. This is the place where Krakuchchhanda Buddha was born. To the north-east of the town of Krakuchchhanda Buddha, going about 30 li, we come to an old capital (or, great city) in which there is a stupa. This is to commemorate the spot where, Kanakamuni Buddha was born. To the south-east of the city is a stupa where are that Tathagata's relics (of his bequeathed body} ; before it is erected a stone pillar about 30 feet high, on the top of which is carved a lion.48 By its side (or, on its side) is a record relating the circumstances of his Nirvana. It was erected by Asoka-raja.”

So we have a very tricky situation here. On one hand, we have near Tilaurkot, pillars that are supposed to be erected by Emperor Asoka to mark birth places of Kanakamuni Buddha and Krakuchchanda Buddha but no Buddha relics. On the other hand we have near Piprahwa, Buddha's relics but no Asoka pillars. Another point worth noting: Xuen Zang's description mentions about a pillar erected by Asoka-raja near the Stupa, where Buddha's relics have been preserved and which has never been found. However he does not mention having seen any Asoka pillars near Birth places of Kanakmuni and Krakuchchanda Buddha but only Stupas. 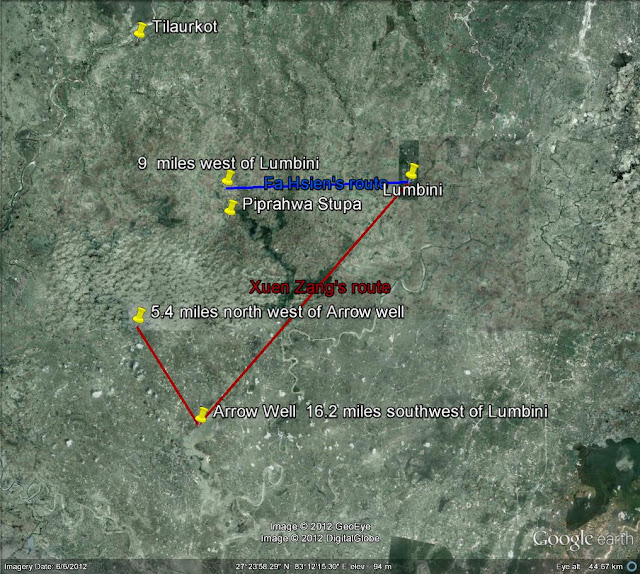 Nepal however continued to be absolutely adamant and decided on its own that Tilaurkot was Kapilavastu and even renamed the district of Taulihawa, in Nepal, as Kapilavastu. This is where things stood in 1971, when an officer of India's Archeological department, posted at Patna in Bihar state, decided to revisit the Stupa following a complaint forwarded to him from the Prime Minister’s Office regarding the poor upkeep of Piprahwa.
His name was Krishna Mohan Srivastava.