The Kapilavastu controversy: Part I 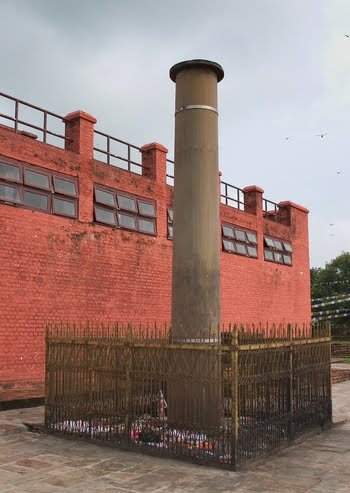 About two centuries after the death or Mahaparinirvana of Goutama Buddha in 5th century BCE, Emperor Asoka of Medieval India, went on a pilgrimage to visit all the places connected with the life of Goutama Buddha. One of the places that he visited during his pilgrimage was the village of 'Lumbini' located in the 'Terai' region of Nepal and which was believed to be the birth place of Buddha. To mark his visit there, Emperor Asoka put up a sandstone pillar with an inscription. Famous Indian historian Sir Jadunath Sarkar has translated this inscription as follows:
“Twenty years after his coronation, King Priyadasi, the beloved of god, visited Lumbini in person and offered worship there because the Buddha, the sage of the Sakyas, was born there. He built a stonewall around the place and erected the stone pillar to commemorate his visit. Because Lord Buddha was born there, he made the village of Lumbini free from taxes and subject to pay only one-eighth of the produce as land revenue instead of the usual rate.” 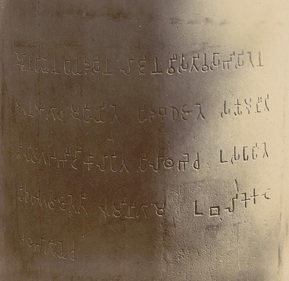 This evidence marks the birthplace of Goutama Buddha without doubt of any sorts and conclusively in the village 'Lumbini'. A famous Buddhist text 'Buddha Charita' written by Asvaghosh in 1st century CE tells us that Goutama Buddha was born as a prince to prosperous Sakya tribe King Suddhodhana of the kingdom of Kapilavastu and was named as Siddhartha Gautama. It was in the city of Kapilvastuthat Prince Siddhartha Gautam spent his early years after his birth in Lumbini. At the age of 29, Prince Siddhartha left his hometown Kapilvastu in search of truth and attained enlightenment asBuddha. He never returned again to live in Kapilvastu. After the death of King Suddhodhana, a gradual decline took place in the kingdom with city of Kapilvastu being left utterly desolate and forsaken for a long time. It lapsed into oblivion and was ruined beyond recognition. For historians, Kapilavastu was a lost city. For the Buddhist world, lack of knowledge about exact location of Kapilvastu, was always considered as a grave loss. Only one thing was known for sure. Kapilavastu was somewhere in the vicinity of Lumbini, since Goutama Buddha's mother 'Mahamaya' was travelling in state from Kapilavastu to Devadaha, her parent's home, to have her first child. On her way, the queen gave birth to a divine son in her tent in the Lumbini grove. We can therefore be sure that since the location of Lumbini is known, ruins of Kapilavastu have to be in the vicinity.

In 1898, a third-generation British planter, William Claxton Peppé excavated an intriguing brick Stupa located on his Birdpore estate between the foothills of the Himalayas and the Gangetic Plains. This Stupa was situated at Piprahwa, close to the Nepal-India frontier. Mr Peppe gives a very graphic description of his discovery in an article. I feel that reading his original description may be a very interesting and worthwhile experience. I quote from his writing here:
"Since the discovery of the pillar at the Lumbini Garden commemorating the birth-place of Buddha Gautama," writes Mr. Peppe, "considerable curiosity has been aroused regarding the different mounds, or ' kots ' as they are locally called, to be found dotted over the country, ranging from Kapijavastu to the northwest, the Lumbini Garden to the north-east, and the British frontier to the south. 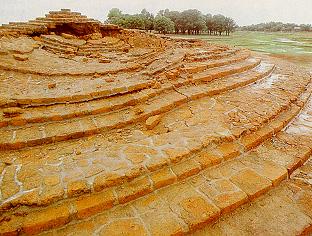 One such mound, more prominent than the rest owing to its size and general marked appearance, is situated in the Birdpore estate, Basti district of the North- West Provinces of India, at the 19.75 mile on the Nepal Uska road, and about one half mile south of Pillar No. 44 on the Nepal and British frontier. Last year I excavated a passage through the cone of this mound, ten feet broad and eight feet deep, and found it was built up of bricks 16 inches by 10-1/2 inches by 3, 15 inches by 10 inches by 3, laid in concentric circles, in clay, layer over layer, and thus establishing that this mound was a Buddhist stupa. In October Mr. Vincent Smith inspected it, and pronounced it to be a very ancient stupa, and told me that if anything was to be found it would be found in the centre and at the ground line. Subsequent events have proved how correct was his surmise. "In the beginning of January the excavation was continued, and a well 10 feet square was dug down the centre of the stupa. At ten feet from the crown a small broken soap-stone urn, similar to those found lower down, was found full of clay, and embedded in this clay were some beads, crystals, gold ornaments, cut stones, etc. From 10 feet a circular pipe, one foot in diamater, filled with clay and encased in brick work, descended to two feet, it then narrowed to four inches in diameter. The bricks surrounding this pipe were sometimes roughly cut and sometimes moulded into the required shapes. After digging through eighteen feet of solid brick work set in clay, a huge slab of stone was unearthed lying due magnetic north and south, and 31.50 inches to the east of the centre of the clay pipe mentioned above. On further excavation this slab was found to be the cover of a huge sandstone chest measuring 4 feet 4 inches by 2 feet 8-1/4 inches by 2 feet 2-1/4 inches. The lid was cracked in four pieces, evidently by the pressure of the brickwork above it, but yet the chest was perfectly closed. Fortunately the deep groove in the lid fitting so perfectly on the flange of the chest prevented the lid from falling in when it was first broken and also when we were removing it. 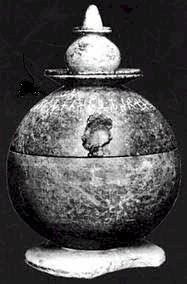 The urns are beautifully turned, and the chisel marks seem quite fresh, as if it had been made a few days ago. The crystal bowl is most highly polished, and has all the appearance of a glass bowl of the present day. " It so happened that we delayed opening this casket three days after we had unearthed it, and our curiosity was raised to its utmost. Our surprise can be imagined when, on removing the lid, we found an empty chest save for these few miniature vases, standing up as they had been placed probably two thousand years ago. The stone casket is of a very superior hard sandstone, and was cut out of one solid piece of rock. It is in a perfect state of preservation, with its sides very smoothly cut; it fact, it is all but polished. I do not think the stone came from the hills north of this district. The weight of the lid is 408 lbs., and I calculate the weight of the whole chest to be 1537 lbs. The brickwork continued for two feet below the bottom of the chest. The round clay pipe at the level of the bottom of the chest took the form of a rectangle, 17 inches by 5 for one layer, and the edge of this rectangle was 21.50 inches from the side of the chest. After this it resumed the circular shape of 4 inches diameter, and ended with the brickwork at two feet below the bottom of the chest. I was most careful in searching this pipe all the way down, but nothing whatever was found in it. The level of the ground inside the stupa is the same as the level of the ground at the outward circumference of the stupa. "The relic urns contained pieces of bone, which are quite recognisable, and might have been picked up a few days ago. The urns contained also ornaments in gold, gold beads; impression of a woman on gold leaf two inches long, upper portion naked, lower portion clothed ; another figure in gold leaf naked ; a large circular piece of rather thicker gold leaf, scrolled on the outside, 2 inches diameter, and may represent the top of a miniature umbrella ; the impression of an elephant on gold leaf, several pieces impressed with a lion, with trident over his back and the Buddhist cross in front ; several pieces with the impression of the Buddhist cross; one piece of solid gold 3/4 inches by 1/2 by 1/3 ; quantities of stars or flowers, both in silver and gold, with six and eight petals. The silver is tarnished, but the gold is beautifully bright, and was so when the chest was opened. Pearls of sizes, many welded together in sets of two, three, and four. Also quantities of flowers or stars, leaves serrated and veined, Buddhist tridents, pyramids, pierced and drilled beads of sizes and other shapes cut in white and red cornelian, amethyst, topaz, garnets, coral, inlaid stones, and shells. There is one bird cut in red cornelian and one bird in metal. "I have compared these ornaments with those illustrated in Archaeological Survey of India, New Imperial Series, Vol. XV., South Indian Buddhist Antiquities, and I find almost every form in my collection, besides a great variety of others. The only inscription of any kind is scratched on the cover of one of the smaller urns. The letters are in the Pali character and about 7- 16th of an inch
long."
I find this discovery absolutely thrilling and fabulous and was similarly also thought during those times. The inscription on the urn said
Sukiti bhatinam sa-puta-dalanam iyam salila-nidhane Budhasa
bhagavate sakiydnam.
Various interpretations and meaning of this text have been given by historians. However, the important fact is that the text confirms the enshrinement of the relics of the Buddha by the Sakyas. Or in other words it confirms the statement of the Buddhist text Mahdpartnibbdnasuttdnta that the Sakyas of Kapilavastu were one amongst the eight claimants to a portion of the relics of the Buddha
after he was cremated at Kushinagar and that they ceremoniously constructed a stupa over the relics.
Since the texts mentioned that the Sakya's had built this Stupa on the outskirts of Kapilvastu, it was believed by many that Goutam Buddha's home town Kapilavastu has been finally found.
However not every one was convinced. There was a doubting Thomos, and he came in the form of a German archaeologist called Dr Anton Führer, a former Catholic priest digging 15 miles away. He had earlier claimed to have discovered the Buddha’s birthplace at Lumbini, just over the border in Nepal, as well as the city where the young Buddha lived as Prince Siddhartha. He immediately casted his doubts doubt on the authenticity of the vase and its ashes.
This was the beginning of the Kapilavastu controversy, which has not been resolved even to date.
(To be continued)
27 August 2012
at 8:55 AM