A little game of Ping Pong 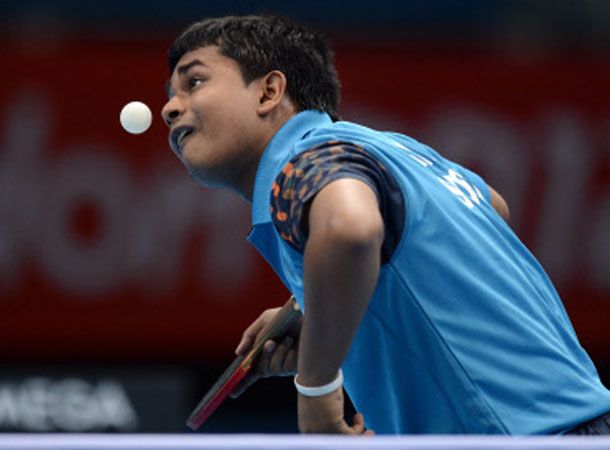 The south China Sea conundrum is just getting more and more murkier by the month. All other nations of south east Asia except China, on the periphery of South China Sea, are much weaker, compared to China, and are finding themselves at odds with their giant neighbour. An effort was made during July 2012 by some of the South China Sea nations, to present a joint front of a sorts to China by agreeing to a joint code of conduct in South China Sea, through the association of these nations known as ASEAN. China effectively managed to bomb the move by using dormant historic rivalry between Cambodia and Vietnam. Since this tiff off between Cambodia and other nations of ASEAN has happened, their relationship in spite of efforts to patch up by Indonesia, have remain little strained, no doubt. 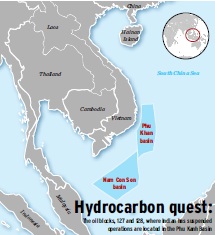 In an earlier post on this subject, Is India leaving South China sea conundrum? I had tried to explain, how India has got drawn in this dispute. To make things clear, I might repeat part of this history here. India's Government owned 'ONGC Videsh Limited' or OVL, (International Petroleum Company of India) had set up its office in Vietnam as early as 1988 ( then known as Hydrocarbons India Private Limited.) with the sole intention of participating in oil exploration in South China Sea region. OVL has been in few petroleum blocks in Vietnam for years and has successfully extracted gas from them. OVL has made some of the blocks commercially viable and has made profits from its activities in Vietnam and the South China Sea in last two decades. China never objected to this and lay any claim to any of the blocks. India was awarded Block 127 and 128 by Vietnam for oil exploration, located up north in Phu Kanh Basin, having roughly equal distance from the Vietnam coast and Hainan Island of China, where it has a large submarine base. Vietnam has always claimed that Phu Kanh Basin is in a continental shelf and falls in it's exclusive economic zone. India began production tests in these blocks in September 2009. However, India first decided in 2011 to get out of block 127 as no oil showed up in the exploratory well. After another year of exploration, OVL informed the oil ministry of India of it's intent to relinquish block 128, also on basis of techno-commercial (not enough oil there) considerations. Oil ministry approved the action and as per terms of contract with Vietnam, India has paid a $15 million exit fee to Petro Vietnam for getting out of the block. China never objected to any activity by OVL except making some angry noises, which were largely neglected by Vietnam.

Exiting these two blocks only for purely techno-commercial considerations, India has made it quite clear to Vietnam of its intentions of staying put in South China Sea and is in negotiations with Vietnam for getting some other blocks allotted to it. Meanwhile, sensing a vacuum created by India's exit from blocks in Phu Kanh Basin, China has suddenly upped the ante with a dangerous act of unilateralism, by putting this petroleum block, till now owned by Vietnam and only claimed by China, up for global bidding. This is likely to increase tensions in this area no doubt.
Indian foreign office, perhaps peeved by these clever Chinese antics and with a wish to support its ally Vietnam, have thrown a jab in China’s direction from a diplomatic standpoint. India has now agreed to allow Taiwan to open a consulate in Chennai. This can be straightway considered as a slap in the face for the Chinese, because they have also requested permission to open a consulate in Chennai quite some time back. India has neither refused the permission nor given it. The request has been pending for quite some time (Six or Seven months)now.
Meanwhile, India , it seems, has requested China, to allow reopening of its consulate in Tibet at Lhasa. The requests for opening new consulates are dealt by countries by principle of reciprocity. When a country asks another country for permission to open a consulate, it would have to allow the other country to return the favor. By this convention, India's request seems to be fair in order.
However, this request has put Chinese foreign office in real quandary. Tibet is China’s weak spot and the Chinese are quite sensitive about Tibet. India also allows the Dalai Lama of Tibet to run his government-in-exile from Indian soil since last half-century. India’s formal diplomatic presence in Lhasa, could turn out to be real thorn in the flesh from Beijing’s perspective. It is just not possible for the Chinese to accept India's request. Indians know this and have used it very effectively as a Quid Pro quo demand for the Chinese
It seems, a new little game of Ping Pong, has just began between China and India.
12 August 2012
at 9:08 AM