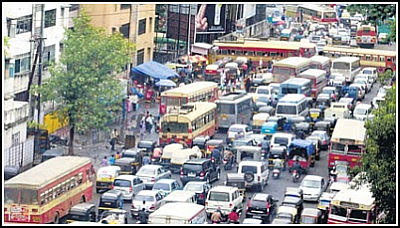 A friend mentioned to me yesterday, an interesting calculation about traffic congestion on roads in my hometown, Pune in India. This calculation is made by an engineer, who works in the roads department of the Municipal corporation. According to this calculation, if all the four wheeled vehicles plying on city roads are made to stand in a straight line, touching bumper to bumper, the total length works out as double the length of all city roads taken together. Such is the congestion of vehicles in the Pune city. It is a common experience here, that if vehicular traffic moving smoothly on any busy road is interrupted even for few seconds, for reasons such as a vehicle pulling up from parking slot or a vehicle taking a U turn, vehicles start piling up on both sides almost instantly. If this interruption continues for more than a half or a full minute, we have regular traffic jam, which may last for any length of time. Unfortunately, this clogging of traffic, is not the only clogging we face here. We have water clogging the roads, whenever there are few spells or sharp showers of rain. We have clogging of garbage all the time, with garbage cans overflowing and removal mechanisms unable to cope up with piling garbage. 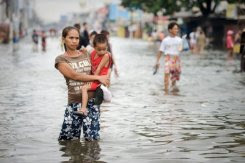 I recently came across a report describing the precarious situations faced by the residents in some of the Asian cities. This report in a way removed one disbelief nurtured by me in my mind, that my hometown holds the distinction of being filthiest or with most congested roads. This however is no solace to me, that most of the urban centers in Asia are suffering the same fate as my hometown. 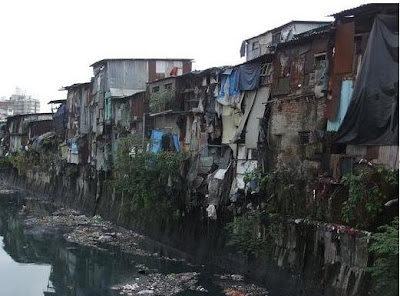 Talking about cities in India first, Mumbai with more than a 12 Million inhabitants has a population density of 20,000 inhabitants per square KM, which makes it one of the world's most densely populated cities. Its packed suburban trains carry more that 7 million people every day. Every year more than 3000 commuters are killed while travelling, sometimes falling from open doors or hit while crossing the tracks. During rush hours, trains are so crowded that it is difficult to breathe even. Mumbai offers the best economic opportunities for the migrant labour, who keep arriving in large numbers every day to Mumbai and since housing is almost impossible to get in Mumbai, they often build shanties on river banks (such as river 'Mithi'), storm drains and even foot paths. Since they can not avail of any civil services, they just dump garbage anywhere they find some space. This clogs the storm drains and impedes the flow of storm rainwater.
Toady, out of India's 1.2-billion population, only 30 percent live in cities, far lower than the 50.6 percent in China or the 70-80 percent in developed countries. Just imagine, what would happen to Mumbai, if 50 % of Indian population migrates to cities. Even at present, with an astronomical rise in the population, pollution and the micro weather of the cities are becoming quite intolerable. This fact and the high living standards of country's burgeoning middle class in the cities, have created great demand for air conditioners, microwave ovens, washing machines and other electrical items. This has no wonder, created a great strain on the power requirements. We have seen how this strain can affect a city in last week's power outage all over north India. 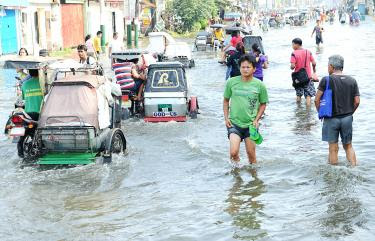 Considering the Asian cities outside India, Dhaka city has already become a moribund city and is facing the worst transport infrastructure problems in its history. In January 2009, the government promised to tackle the crisis with an array of ambitious rail, bus and road projects, but most are still on paper. Intelligentsia in Bangladesh feel that it is dying fast and there is no hope that it can be saved. However, traffic jams are by no means unique to Dhaka. In the Indonesian capital, Jakarta, experts predict that with its aging bus network and lack of a suburban train system, the capital will reach total gridlock by 2014. A global commuter satisfaction survey carried out in 2011 ranks Jakarta in the bottom position.
Bangkok and Manila have been hit by the most devastating floods in decades over past year. Yet, on the outskirts of Manila, vital forested areas have been destroyed to make way for housing developments catering to growing middle and upper classes and within the city squatters have been building shanties at their own will. This rapid urbanization without proper planning is blocking the natural waterways . This and the neglected drainage systems, are the two major factors behind the deadly floods that have battered the Philippine capital Manila in recent times. Thailand capital Bangkok has been actually built on swampland. But as building boom shows no sign of abating with apartment towers mushrooming around the city, the city is slowly sinking and risks being below sea level in half a century from now. Bangkok also depends heavily on ground water to meet the growing needs of its factories and 12 million inhabitants. Aggressive groundwater extraction is taking a heavy toll as groundwater levels are dropping lower and lower.
According to experts, the principal reasons for this disastrous situation faced by urban conglomerates in Asia are not difficult to find. Poor strategic planning, paltry investment in infrastructure and a lack of political will, have made these overcrowded cities highly vulnerable to the pressures from ever increasing population density, shortage of water and climate change. McKinsey Global Institute research centre reports that India alone needs 350-400 KM (around 250 miles) of new metros and subways a year and 19,000-25,000 KM of roads. If we talk of Asia as a whole, these figures would rise to astronomical levels. 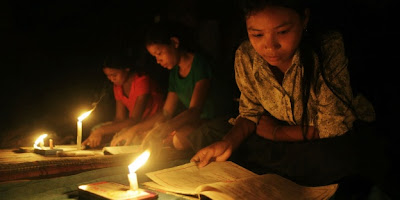 The living conditions in the cities of Asia have deteriorated to such an extent that even with ever increasing prosperity, the inhabitants are still forced to dwell their lives in the same squalid conditions faced by them, when they were not so well off.
Is their a solution? At least in India, my answer is negative. With the democratic set up, there is almost no chance of any political leadership taking up unpleasant corrective steps. All major cities in India appear to be doomed. How long would they survive, one may never know. But the process might have already began.
14 August 2012
at 9:27 AM