In the footsteps of the Big Brother 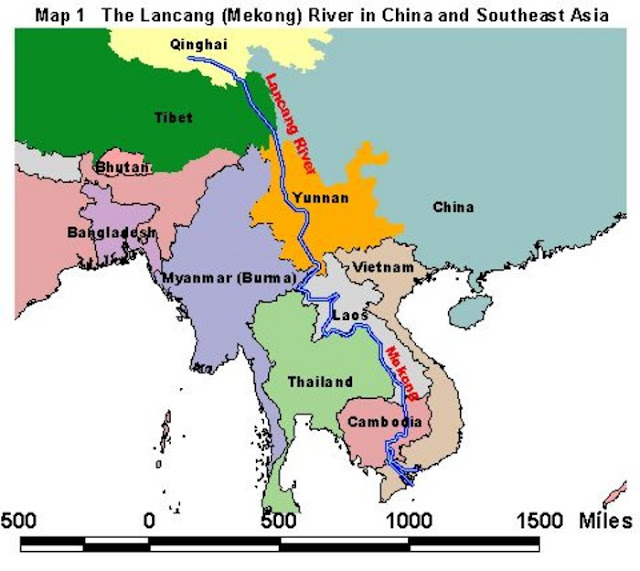 The Dza Chu, or Mekong River, begins its life in the mountains of Tibet and becomes a roaring torrent as it swirls through deep gorges, dropping an astonishing 4,500 meters [14,800 feet] in elevation through Tibet and China, over a distance of 1,800 km [1,118 miles], before turning tamer to enter Laos. The river is a life line for further downstream nations such as Myanmar, Cambodia, Laos, Thailand, and Vietnam. More than 60 Million people from these countries depend on the Mekong River for their livelihoods. This life line of these people is under tremendous threat as parts of the river are at their lowest levels in last 50 years. Further downstream, drought, salt deposits and reduced soil nutrients are threatening food production in the rice bowls of Cambodia and Vietnam. All the downstream countries feel that the principal reason for low water levels in the river is the on going construction of 8 dams by Chinese on the Mekong. Chinese however do not accept this and say that this year’ drought and the extreme dry season are the main reasons for the low water levels. Four dams already exist in the narrow gorges of the Upper Mekong in China and Chinese want to build even more number of dams on the Mekong and feel that building of dams is the only efficient way of regulating water flow and drought relief.

Laos, which has been opposing Chinese plans to build the dams on the Mekong, now seems to be following the footsteps of the big brother as it has joined China to build another dam on Mekong, within it's own territory. In a dusty gorge at a remote place called Xayabouri, deep in landlocked Laos, work is believed to be underway to build a dam on Mekong river. According to the official Government position, Government is yet do decide, whether to go ahead with damming the Mekong at Xayabouri. However all the evidence collected so far, points out that the project has began in all earnest. 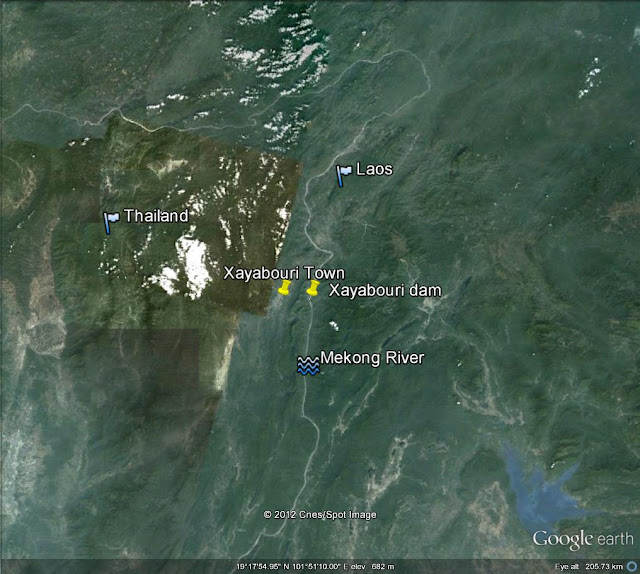 A multi-billion dollar contract was signed by the Lao Government with a Thai company, CH Karnchang, to build the dam in April, in spite of the protests by countries downstream and the warnings of scientists, this construction company has begun building the dam across the lower reaches of Mekong at Xayabouri. The project is so significant that it could change the face of South-East Asia forever.
Government of Laos is so secretive about the project that it is not allowing any media to visit Xayabouri. An environmental campaign group, International Rivers had recently chartered a boat to film and photograph the building work at Xayabouri secretly. They have found at the proposed site, newly built roads with dozens of construction vehicles and trucks Huge piles of gravel now line the banks of the river. New homes have been built for people who will have to be resettled. The group even saw a huge containing concrete wall. The villagers in nearby villages confirmed that the river has been widened. 'International rivers' confirms that preparatory construction is now finished and that full construction is now under way. However Government says that the work at the site is simply preliminary, in case the dam is approved. All that it has done is build roads, construct a camp for workers, and carry out a geological survey on part of the river bed. 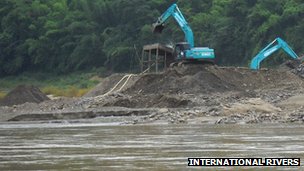 Two years ago, a team of scientists carried out a most comprehensive study on Mekong river. Their report called as Strategic Environmental Assessment of Hydropower, says that dams were likely to cause serious and irreversible environmental damage. The Mekong along with its tributaries form the world's largest inland fishery. It is feared that many migrating species could become extinct if dams are constructed on the Mekong. In addition, loss of fish would seriously affect poorer households along the river. A fall in fish stocks would also have a large effect on food security for millions of downstream people, who depend on Mekong for their survival. 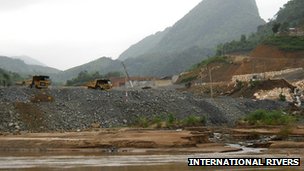 It is believed that Laos has ambitions plans to put eight privately owned dams across the Mekong mainstream for hydropower generation and become the power house of south-east Asia. Since its own requirements of power are quite moderate, it wants to export electricity to neighbouring Thailand. A secret deal has ben already signed with Thailand to sell 95% of the electricity generated at Xayaburi. In 1995, Laos, Thailand, Cambodia and Vietnam, the four countries who share the Lower Mekong, jointly created the Mekong River Commission (MRC) and agreed to consult each other about all matters relating to Mekong river. However MRC has no idea about the dam at Xayabouri.
As rumours of proposed dam construction going on, continue to grow, relations between Laos and Cambodia and Vietnam, the downstream countries, have deteriorated. There have been demonstrations by affected communities both in Thailand and Cambodia. A law suit has been filed and next week a lawsuit will be filed against the Thai government alleging that a secret deal has been signed to buy Xayabouri's electricity.
If this dam building spree continues unabated, the Mekong may soon have more than a dozen dams on it, destroying completely, a great river forever.
6 July 2012
at 9:08 AM