God's Particle and the Universe 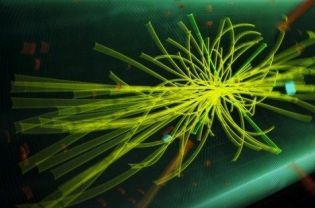 All of us are quite familiar with the process of constructing a house. Talking at a more basic level, what we need are the materials for building the house and a force in some form of other to convert these building materials in the form of a house. This force is generated from energy, either in form of human activity or by some machines. To produce this energy, human bodies convert the food eaten into energy or machines convert fossil fuels into energy. So we once again come to the materials, which we convert into energy to produce force that can build a house with some more materials. The interdependence of materials or matter with energy was formulated by Albert Einstein, more than hundred years ago in form of his famous energy-mass equation.

All matter has mass, which means that the mass is the basic quality of matter. An Eighteenth century Chemist John Dalton first proved scientifically, that all mater consists of a basic unit entity called atom. In 1911 another British Scientist Ernst Rutherford showed that atom is not a basic particle but consists of two components, a nucleus and and electron. This was challenged by James Chadwick in 1932, who showed that the nucleus actually consists of two sub components; Proton and Neutron. In the 1960 decade, it was found that Protons and Neutrons, instead of being the basic particles are actually made from a triplet of an another particle names as Quarks. By 1970, scientific community started believing that the universe has been created by 12 types of basic particles which includes Quarks of 6 types, Electrons and some more particles, which have a short, transitory life. Most of the particles from this list have masses but Photons have no mass and move at the speed of light.

Returning to the house analogy, it becomes clear that even if we have the material parts, we still need forces to keep the material parts at designated places, assemble them in the required order and then finally see that they stay together: In exactly similar fashion, forces are required to gather atomic and sub-atomic particles at designated places, assemble them in required order and then hold them together permanently. First of these forces is the Gravitational force , which was quantified by Great Issac Newton long way back in 1687. The next force that was discovered was the very familiar electromagnetic force, which makes all electrical stuff we use, work and has a profound effect on the daily life of modern humans. Going to sub-atomic level, this force ensures that the nucleus and the electron stay together in form of the atom, which happens to be the basic building block of all the materials we use. Two more forces, that work at the sub-atomic level, namely the strong nuclear force and the weak nuclear force work over very minute distances. Strong nuclear force ensures that atoms and electrons form various orders and arrangements and stay in those arrangements in spite of disturbing effects of the electromagnetic force and actually give us all the elements of the periodic table. Weak nuclear force is essential for the nuclear transformations that go on inside the stars, which also includes our Sun. This force is principally responsible for getting us the energy from the Sun or in reality our life. So far so good! We have the basic particles and the forces, but how do we create the universe out of them. How these forces are synchronised? So that they do not act against each other. These questions are very serious and thousands of scientists from all over the world have been working on this since 1970. One solution to this synchronization problem is to consider that all these four forces are really the forms of the some fundamental and unique force. It is easier to say this but almost impossible to prove with our present knowledge. After number of years, scientists have been able to unify electromagnetic and weak nuclear forces to some extent.

Leaving aside the problem of synchronization, scientists also found it impossible to explain how these forces actually work on the sub atomic particles. A theory was proposed and is generally accepted that the particles exert this force on each other by exchanging a class of particles called Bosons (Named after famous Indian scientist Bose.), which have a mass and also Photons, which have no mass. Bosons also are constituents of the list of the Fundamental particles. These 12 particles and four basic four basic forces mentioned above are now considered as The Standard Model in Physics.

A problem was not explainable with Boson exchange theory; From where do the sub atomic particles acquire a mass? To answer this question a Scottish physicist Peter Higgs, predicted in the 1960's, that there has to be another Boson which would create a mass out of an energy field and would exchange it with another sub atomic particle before decaying it into Photons. This Boson came to be known as Higgs Boson and is a part of a standard model of physics as the 12th Particle.

The energy field predicted by Peter Higgs is supposed to be an invisible energy field that pervades the whole cosmos. Some particles, like the photons that make up light, are not affected by it and therefore have no mass. Imagine mixing of a thick porridge with a spoon. As we mix it, some porridge would always drag on the spoon. Similarly sub atomic particles acquire masses as they move through Higgs energy field by exchanging Higgs Bosons with the field.

Scientists believe that in the first billionth of a second after the Big Bang, which created the Universe, the place was a gigantic soup of particles racing around at the speed of light without any mass to speak of. It was through their interaction with the Higgs field, that they gained mass and eventually formed the universe.

It would be obvious to anyone that since Higgs Boson transfers mass from energy field to a particle to, it must exist for a tiniest interval of time before destroying itself in form of Photons. It had been almost impossible to physically detect it's presence. A facility was built by European Centre for Nuclear Research (CERN) in 1970. This facility, built at the cost of $ 10 Billion near Swiss-French border, known as Large Hadron Collider, actually is an atom smasher, which creates high-energy collisions of protons to investigate dark matter, anti-matter and the creation of the universe, which many theorise occurred in a massive explosion known as the Big Bang. 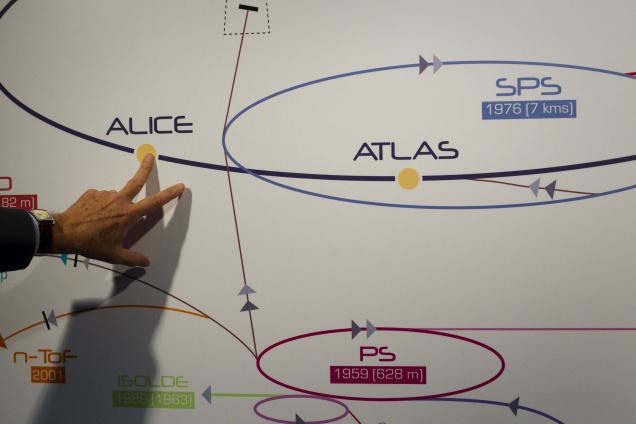 The Large Hadron Collider is the world's biggest and most powerful particle accelerator, a 27-km (17-mile) looped pipe that sits in a tunnel 100 metres underground. Two beams of protons are fired in opposite directions around it before smashing into each other to create many millions of particle collisions every second in a recreation of the conditions a fraction of a second after the Big Bang, when the Higgs field is believed to have 'switched on'. The vast amount of data produced is examined by banks of computers. Of all the trillions of collisions, very few are just right for revealing the Higgs particle. That makes the hunt for the Higgs slow, and progress incremental.

Two research teams have been working independently at CERN to detect presence of Higgs Boson particle for last several years. The leaders of the two teams Joe Incandela, head of CMS with 2,100 scientists, and Fabiola Gianotti, head of ATLAS with 3,000 scientists each presented recently, in complicated scientific terms, what was essentially extremely strong evidence of a new particle. Mr. Incandela called it “a Higgs-like particle” and said “we know it must be a boson and it’s the heaviest boson ever found.” He also added that "But we can see that it decays to two photons, for example, which tells us it's a boson, it's a particle with integer spin," he says further that "And we know its mass is roughly 100 times the mass of the proton.... This is the most massive such particle that exists”. 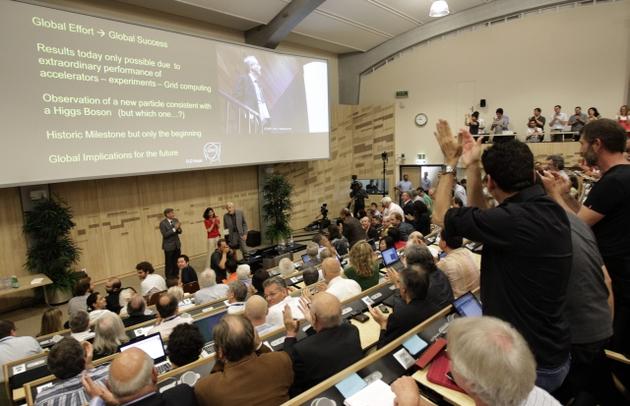 The Higgs boson, which until now has been a theoretical particle, is seen as the key to our understanding of why matter has mass, which combines with gravity to give an object weight. The idea is much like gravity and Isaac Newton’s discovery of it: Gravity was there all the time before Newton explained it. But now scientists know what a boson is and can put that knowledge to further use.

Higgs Boson was given a name as “God particle,” by Nobel Prize-winning physicist Leon Lederman, who is actually a non believer and wanted to say as Goddamn particle. It was misreported as God's particle and the name has stayed. What can be said with this discovery is that we have reached little bit deeper and further in understanding wonders of the subatomic universe and it's construction.