Doing your own thing! 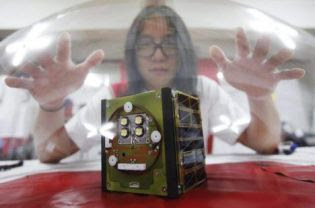 My late father was an Amateur Radio enthusiast. During his spare time, he would always be sitting in his shack and communicating with like minded guys around the world. Initially, he used a morse key for sending messages. In those days, any visitor to our house was always surprised to hear those “DiDi-DaDa- DiDi“ sounds reverberating in the house. Sometimes, these amateur radio guys, who called themselves hams, would arrange some sort of competitions called DX contests, where the aim would be to contact as many other hams as was possible in say 24 hours. I remember my dad sitting in his shack, throughout the night doing his “DiDi-DaDa-DiDi” routine all night and how I would doze off listening to that chatter of the morse key. Later, he graduated to using a microphone. He had, what these ham guys call a call-sign, assigned to him by international amateur radio organization. I still distinctly remember my father's voice, calling “ CQ, CQ, CQ this is Victory Union Figure 2 England Japan from India, V for victor, U for Union, figure 2, E for England, J for Japan; handle here is ARAVIND, A for America, R for radio, A for America, V for Victor, I for India, N for Nancy, D for Denmark; CQ, CQ, CQ .” He would then switch off the transmitter and increase the volume of his receiver to tune in any other guys, who had listened to his call and wanted to speak to him. After a contact was established, the conversation mostly would be few pleasantries and then they would switch off, looking for another ham on the air.
Another bee in the bonnet for these hams, was collecting electronic junk from military surplus stuff. Whenever these hams visited each other, they would gift some junk to each other and would be mighty pleased with that. All this collected junk, would be used to build a transmitter, which would send their signals on the airwaves. 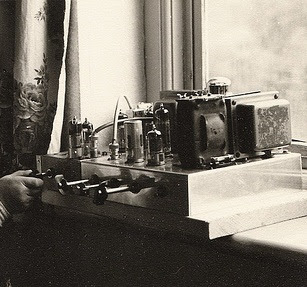 In those days, electronics was simple with valves or vacuum tubes reigning as kings. There were no Transistors and Integrated circuits or other high technology stuff. Electronics meant valves, resistances, capacitors and coils. One could easily build his own gear with these parts coming from military surplus junks. My father was always very keen to build his own gear. When he became very old, he bought his first 2 meter transceiver reluctantly as it was almost impossible to build home gear for this band. 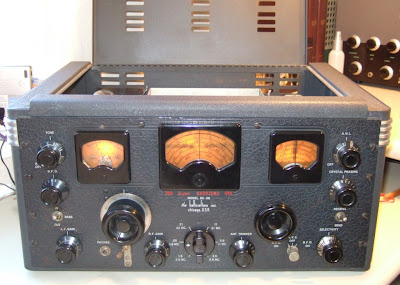 For receiving the signals, coming on airwaves, most hams used extremely sensitive old second world war military receivers. My father had a receiver, if I remember correctly, known as 'Hallicrafters SX-28', which had a very complicated look. I used to be absolutely fascinated to watch my father tuning and adjusting a multitude of dials and knobs to get a sharp signal.
Later, electronics became more and more complicated and sophisticated. It was no longer possible to hook up simple basic gadgets, consisting of one or two valve circuits, yourself. During last decade the complexity has further increased so much, with the arrival of the digital age, that any electronic gear can only be assembled using expensive machinery and sophisticated techniques. It is now just impossible to be an electronics hobbyist, unless you want to buy ready made kits and make some final assembly as per manufacturer's manual from partially assembled circuit boards.
All these things of the past are flashing in my mind today because of an amazing story of a 34 year old South Korean youth, Song Hojun, who has unbelievably built his own satellite, buying components from back-alley electronics stores, in his basement. An engineering student at a university and an artist, Song regularly incorporates technology into his art creations. In a work called Apple, he used light bulbs that would change color from green to red, when people take photos of it with flashes. 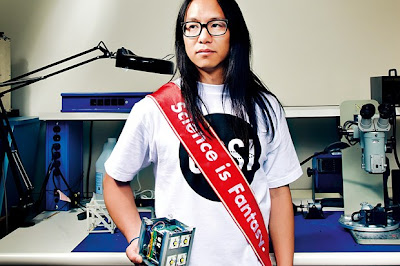 While working as an intern at a private satellite company, Song came up with his idea of 'Open Satellite Initiative'. He contacted space professionals from Slovenia to Paris and told them , “ I’m just an individual, not someone working for big universities, corporations or armies.” After this introduction most of the professionals opened up to him and easily gave out information. Song Hojun has named his satellite, built from electronic parts found after rummaging through back-alley electronics stores as 'OpenSat' and it has costed him as little as $500. He says that “Making a satellite is no more difficult than making a cellphone. I believe that not just a satellite, but anything can be made with the help of the Internet and social platforms. I chose a satellite to show that symbolically.” Song accepts that universities and scientific groups around the world, as well as amateur radio clubs have made do-it-yourself satellites since decades. However, Song's 'OpenSat' is the first truly personal satellite designed and financed by an individual. Song spent nearly six years combing through academic papers, shopping online at sites that specialize in components that can be used for space projects and off course small electronic parts stores in Seoul. Song runs a small electronics business to support himself. However bulk of the required funds to build the $500 satellite have come from his parents. 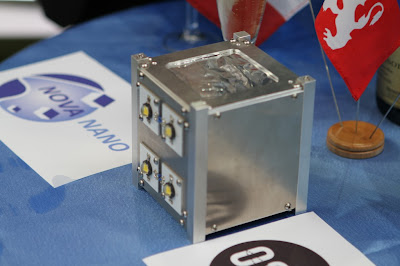 The cubical shaped 'OpenSat,' weighs 1 kg and measures 10 cubic centimeters. It will transmit information about the working status of its battery, the temperature and rotation speed of the satellite’s solar panel. Radio operators will be able to communicate with the satellite. If all goes well, it will repeat a message in Morse code using its LED lights at a set time and location.
Building up the satellite perhaps was easy as launching it into space is turning out to be very expensive. The cost of launching it, could work out to be $ 120 million. A French Technology company 'NovaNano' has however brokered a contract with Song by which the satellite will be launched from the Baikonur Cosmodrome in Kazakhstan in December with another satellite. Details of who are actually financing the launch are unknown.
Song now finds that he has become sort of a celebrity as he has been invited to talk at international universities and organizations including MIT Media Lab and CalArts, both in the United States, and the Royal College of Art in London.
Isn't this story of this young man quite amazing? I had, over the last few years, come to believe that art of electronic circuit design, at individual or small organizational level, is dead and all new electronic equipment of future, can come out from the laboratories of giant multinational companies or Governments. Song has single handedly proven, that this is a myth and an individual, acting in his own capacity, can still achieve what radio amateurs or hams of yesteryear managed to do with military surplus junk.
Viva La creativity! Hats off to Song Hojun.
28 July 2012
at 9:19 AM