ASEAN getting ship-wrecked on the Nine dash line

ASEAN or The Association of Southeast Asian Nations is a motley group of ten countries from southeast Asia; namely Indonesia, Malaysia, the Philippines, Singapore, Thailand, Brunei, Burma (Myanmar), Cambodia, Laos, and Vietnam. The countries differ widely over economic status, political systems, ideology and geographical size. There are small city states like Singapore and Brunei and country like Indonesia spread over a huge area, included in the group. ASEAN's aims include accelerating economic growth, social progress, cultural development among its members, protection of regional peace and stability, and opportunities for member countries to discuss differences peacefully. ASEAN holds meetings, twice every year, known as the ASEAN Summit, where heads of all member country governments meet to discuss and resolve regional issues. ASEAN also conducts meetings and forums with other countries outside of ASEAN with the intention of promoting external relations. Along with heads of states summit meetings, an annual meeting of ASEAN countries Foreign Ministers is also conducted. It is customary that after each of these summit meetings, the group publicly issues a concluding joint statement. ASEAN is sometimes dismissed as a talking shop but the conflict in South China Sea between China and many ASEAN members has brought in new strategic importance for ASEAN. Foreign minister's summit of 2012 was recently held at Phnom Penh, Cambodia. However, for the first time in 45 years, the group failed to issue a joint post-conference statement, an unprecedented event. The single reason for this discord amongst the ten nation group is known as a Nine-Dash Line. This imaginary dashed line with 9 dashes takes in about 90 percent of the 3.5 million square kilometers of South China Sea as part of China on Chinese maps, has been drawn by China on the portion of the map of Southeast Asia over a large part of the South China Sea. 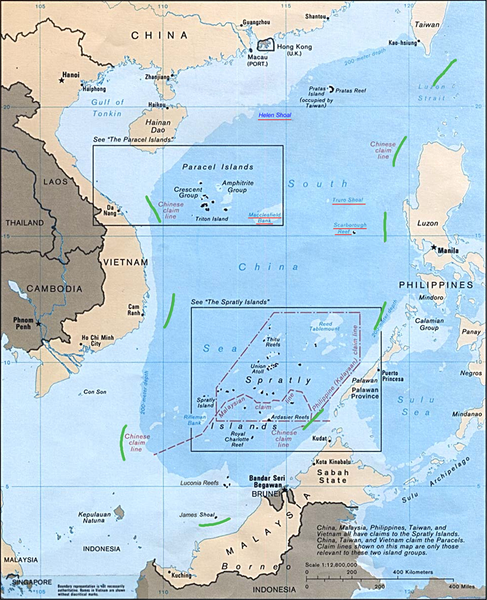 The Nine-dash line was originally an "eleven-dash-line" and was first used by the then Kuomintang government of the Republic of China in 1947 for its claims to the South China Sea. After the take over of Chinese Government by Communist Party of China, the line was adopted and revised to nine-dash line by Chinese premier Zhou Enlai in 1949. To support its claims, the Chinese Government says that China's sailors discovered Huangyan Island 2,000 years ago and refer to extensive records of visits, mapping expeditions and habitation of the area from the Song Dynasty (960-1279 AD) till modern times. Internationally disputed areas of Scarborough Shoal, the Paracel and Spratly Islands fall within this nine-dashed line.
Even though this line was first claimed by Chinese Government in 1947, no other country objected to it then. Chinese Government submitted a territorial claim for the area of the South China Sea, falling within the 9- dashed line, on May 7, 2009 to the UN. Immediately, the Philippines lodged a diplomatic protest against China for claiming the whole of South China Sea illegally. Vietnam and Malaysia filed their joint protest a day after. Indonesia also registered its protest, even though it did not have a claim on the South China Sea.
Of all the areas that lie within this 9 dash line, Philippine and Chinese ships had a standoff in June 2012 over Scarborough Shoal, one of the disputed areas claimed by both these countries. Another disputed area, The Spratly Islands are a group of more than 750 small reefs and islets in the South China Sea. The archipelago lies off the coasts of the Philippines and Malaysia (Sabah). Out of these, about 45 islands are occupied by small numbers of military forces from Vietnam, China, Taiwan, Malaysia and the Philippines. Brunei also makes a claim on a small part of the archipelago. Similarly disputed Paracel islands consist of about 30 islets in South China Sea and lie about 180 nautical miles from Chinese island of Hainan. The sovereignty of the archipelago has been the subject of disputes among China, Taiwan, and Vietnam. Vietnam had given to India two sea blocks from this area for oil exploration. India found no oil at commercially feasible quantities for exploration and has since returned the blocks to Vietnam. Most of the disputed areas are rich fishing fields and are expected to be rich in Hydrocarbons, though India did not find any gas or oil. The area provides 10 per cent of the global fisheries catch and carries $5 trillion in ship-borne trade. Half the world's shipping tonnage traverses its sea lanes. With such high stakes, no country is willing to give up its claims over any of the disputed areas and this dispute could easily become one of the biggest potential flashpoints in the Asia-Pacific region.
Since April 2011, ASEAN members have been discussing a model code of conduct for nations having claims over South China Sea including China. Philippines is trying to push ASEAN to unite and persuade China to accept a code of conduct based on a UN law on maritime boundaries that would delineate the areas belonging to each country However ASEAN countries were divided over when to include Beijing in discussions about the draft code of conduct, leading to a big disagreement. Chinese do not like this stance by ASEAN and say that South China Sea issue is not an issue between China and ASEAN, but between China and some ASEAN countries and want to discuss the issue bilaterally so that it can put up considerable pressure on that individual country.

Chinese have been playing their moves very carefully and have started using Cambodia's historic enmity towards Vietnam to their advantage. During ASEAN meeting, Cambodia toed up to Chinese line and and said that the disputes should not be brought to a multinational forum like ASEAN but instead should be negotiated by rival claimants one on one. During the ASEAN foreign affairs ministers summit of 2012, both Philippines and Vietnam wanted a mention of their separate territorial disputes with China in the joint post conference. Since Cambodia is at present chairman of ASEAN, it rejected a proposal by the Philippines and Vietnam to mention their separate territorial disputes with China in the statement.
By using Cambodia, China has managed to create a dangerous rift between ASEAN countries and this has started ringing alarm bells all over South East Asia. ASEAN diplomats have now fully realized the Chinese game and are concerned that disagreements over the territorial issue could destroy the regional bloc’s credibility and unity. They realize that unless something is done quickly the rift between ASEAN members is likely to widen and damage the grouping itself.
Unless the ASEAN countries agree on the six principles stipulated by Indonesian spokesman that include avoiding use of force amid the disputes, the resolution of the conflicts in accordance with international laws and the early signing of a legally-binding “code of conduct” aimed at thwarting any major armed conflict in the disputed territories and present a unified front to China, future of ASEAN looks very uncertain and the chances are there that the group shall remain only as a talking shop as believed by many. None of the ASEAN countries, who have a territorial dispute with China, would be able to stand up against the Chinese pressure if the dispute is to be discussed bilaterally. China is fully aware of this and is trying to break ASEAN, which alone can present a solid unified front to China with tacit US support.
It appears at least for now, that China has certainly managed to get the ASEAN ship wrecked on the Nine-dash line. It is up to ASEAN now to make moves that would keep it's unity.
20th July 2012
at 8:43 AM