Any person, who has some knowledge of the Geographical and political situation of the region north of Leh in Ladakh, would feel relieved that latest round of talks between India and Pakistan on Siachin have broken down. Obviously in diplomatic terms no one says so. The official statements say, “The two sides agreed to continue dialogue on Siachen in keeping with the desire of the leaders of both countries for early resolution of outstanding issues. Both sides acknowledged that the ceasefire was holding since 2003.” This really means in simple terms that the talks have broken down.
Many people are likely to question the importance of holding militarily, an obscure mountain ridge in South Karakoram mountains at a great human and material cost to India. But it only shows their ignorance. In the entire history of Jammu & Kashmir state conflict since 1947, operation Meghdoot of 1984, which had led the way to India's present and extremely strong position on the Saltoro mountains, is the only instant, where daring actions of the army have been backed by the resolute support of the New Delhi Government and has produced excellent after results. Haji Pir is a strategic mountain pass in PirPanjal mountain ranges used by Pakistani infiltrators. In 1965 war, this was captured by the Indian army in a daring operation. Later, during Government to Government negotiations, it was returned to Pakistan: a costly mistake as proved later. Luckily Government allowed the army to keep its hold on Saltoro ridge. 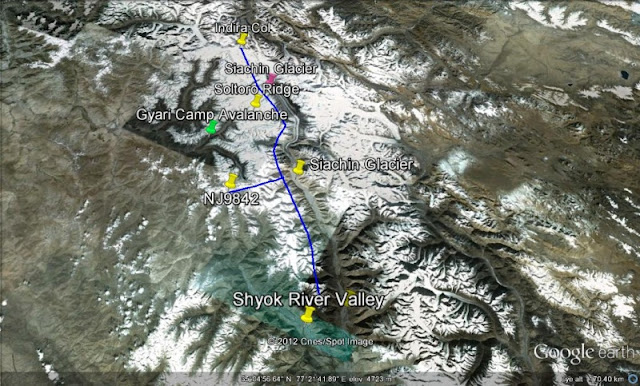 Let us first see, where is this Saltoro ridge. On the northern side of the Indus besin, which incidently runs east to west, rises a great mountain range known as Ladakh mountain range. To cross this range is by itself a forrmidable task. There are only two mountain passes here. One is off course the well known Khardung La (18380 feet) and the other one is the Digar La (17325 feet), further to the east of Leh. After crossing the Ladakh range , one enters in the Shyok river basin which runs approximately towards northwesterly direction. Nubra river, flowing from north-south direction merges with Shyok river near the village of Khalsar. The Nubra river basin is flanked on the east by the Giant mountains of Saser Muztagh range. On the west bank of this river, rise the mountains of the Saltoro range. This range which begins at the point of confluence of Shyok and Nubra rivers, spreads northwards in a Y shaped formation. The left branch marking the line of actual control between India and Pakistan and the right branch extending all the way to Indira Col in the Karakorams, right on the International border between India and China, north of famous Karakoram pass. On the map, Saltoro ridge appears like a dagger and in geopolitical terms it is indeed a dagger, sturck deep into the territories held by Pakistan and which belonged to erstwhile Jammu & Kashmir state of British India. Saltoro mountains are perhaps not high as great spurs of Saser Muztagh range, but still most of them in the north, have heights around 20 to 22K range. The Indian Army posts on Saltoro range, give them a commanding position as they can look deep into territory held by Pakistan towards west and north. In fact the entire region north of Saltoro is mountainous and inhospitable right up to the Hunza valley, where Pakistan and China have built a road jointly. 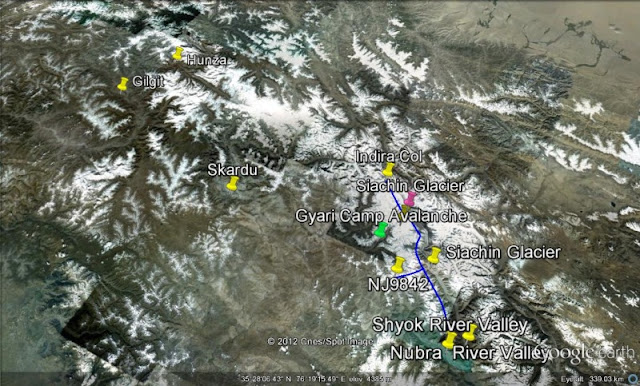 Coming back to the main subject, why saltoro ridge is so important for India, I can list number of reasons.
Saltoro ridge, though consisting of a series of formidable snow clad spurs, have three mountain passes through which an invading army can come down to Siachin valley and then continue towards Nubra valley. Out of these two passes namely Sia La and Bilafond La are completely controlled by India. Approach to the third pass known as Gyong La is controlled by Pakistan. Controlling the passes is of paramount importance to India as these passes are the only possible routes through which any invasion of Ladakh is ever possible. 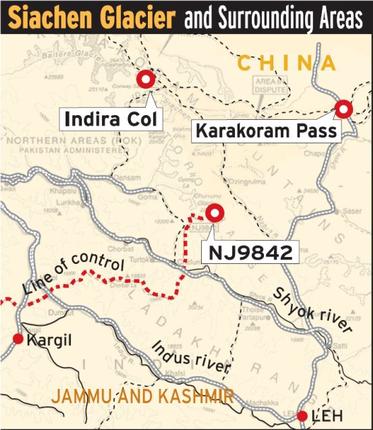 Before 1950, Karakoram pass was India's gateway from central asia for thousand;s of years. The route through this pass was connected to the south silk route and was used by trade caravans and pilgrims. India can hold and control Karakoram pass only and only if Saltoro ridge is firmly in India's hands. This route through Karakoram pass has full commercial potential for the future to once again become India's gateway to central Asia. This is one reason that perhaps is the most important reason for holding Saltoro ridge.
The terrain surrounding Saltoro ridge is such that the Baltistan region west of it, is subject to regular landslides and avalanches. Only recently, a major disaster had struck Pakistan army HQ in the region killing 126 soldiers. Cost of holding terrain west of Saltoro ridge in Baltistan is becoming unreasonably high for Pakistan without any untenable gains. Pakistan's keenness for a accord, essentially stems out from this hard fact. For India, the gains of holding Saltoro are so apparent and Indian soldiers are also well dug in there in a very commanding position.
Thirdly it would be clear from the Google earth satellite view, that the entire region of Baltistan and Hunza can be watched clearly from Saltoro ridge. Any collaborative activities between Pakistan and China can be monitored from here. For India, it is a very advantageous position.
The demand made in certain quarters for withdrawing Indian soldiers from Saltoro ridge is therefore according to me, quite unnecessary from India's point of view. Pakistan is likely to withdraw or reduce the presence of its armed forces from Baltistan, because of the human and material costs. It would be foolhardy for India to withdraw, when its is holding all the aces and there is no compelling need to do so.
13 June 2012
at 4:41 PM