The House of Laughs

During early years of Indian republic or in the Nehruvian era, socialism was the king. The soviet model of planned development through centralized planning process and control was considered the magic mantra of those days. Entire development of the newly independent nation was planned to be capsulized in what were called as five year plans. Everything was thought to be very simple. In first five year plan, India was supposed to become self sufficient in food production. In second five year plan it was the turn of the heavy industry and all such new industries were planned to be set up as public sector companies or those under Government control. Needless to say all these plan targets flopped. India never became self sufficient in food till decade of 1980's, when an American agriculturist Norman Borlaug came along to India and introduced his concepts or hybrid plant cultivations. The heavy industries set up under Government control, soon became white elephants and a great opportunity for bureaucrats, who understood nothing about industries and production. 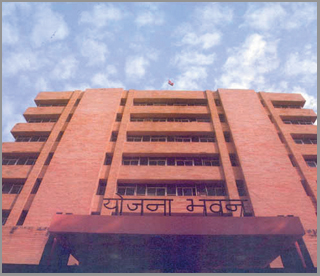 The nerve center of all this planned development and the five year plans was a building on New Delhi's Parliament street or Sansad Marg, aptly named as House of plans or 'Yojana Bhavan.' It was in this building that the chief architect of India's five year plans, known as Deputy chairman of the planning commission, used to sit. He controlled a vast bureaucratic set up known as Planning commission, which oversaw the five year plans and had power to control everything about India's development. Every year state chief ministers made made a bee line to this building to get plans for their states approved and money released. Mainly politicians, who could not be accommodated in the cabinet were appointed to this post of Deputy chairman except for a unique exception of Dr. D.R. Gadgil, who was an eminent economist.

After disastrous failure of the soviet socialistic model in 1990's, there were not many takers for India's five year plans. In addition, Indian Government under prime ministership of Shri Narasimha Rao, threw away the licensing controls in the same decade and ushered in a new era of liberalization for the Indian economy. This further brought down the importance of Yojana bhavan. At present planning commission still prepares these five year plans, but it is difficult to say as to how much importance is really given to these plans by other Government departments now.

Planning commission of India came out with a super blooper in January 2012, when in a statement submitted to the Supreme Court of India, it claimed that any urban family spending over Rs. 32/- (US$0.581) per day per person can not be considered as poor. For rural folks, this limit is supposed to be Rs. 26/- (US$ 0.4727) only. Any family whose expenditure is below these figures, only can be considered as below poverty line. For a country where food inflation has been raging in double digits and where a mini cup of tea costs at least Rs. 5/- (US$ 0.091), this kind of bloomer from planning commission was something no one could accept. Overnight, Planning commission of India and its ivory tower officers became a subject of ridicule and fun. It took much firefighting effort on part of the Government machinery to control the damage.

However it seems that Planning commission is hell bent upon creating lives of Indians easier with bursts of antics to provide comic relief. Media reported recently that when the Government is preaching austerity measures, its own planning commission has spend Rs 35 Lacs (US$ 63000) on renovation of two Toilets in Yojana Bhavan. Naturally there was huge hue and cry from the media. To douse the fire , planning commission and its deputy chairman released further howlers. Deputy chairman says that
“ It was within the commission's budget and there was nothing wrong in renovation of the toilets.” and "There is nothing wrong. We have tried to clean up the facilities. If the buildings are being improved, I think this is good."

A statement issued by the commission says that "While the amount of Rs 30 lac being mentioned is correct, an impression is being created that this has been spent on two toilets. This is totally false because these toilets have multiple seats in addition to separate facility for the differently abled. Each of these blocks can be simultaneously used by approximately ten people," I find this statement outrageously funny. We must really thank the person who wrote this copy, for the great humour.

There were complaints in the media that the access to these toilets is now controlled with smart card access control system costing abot Rs. 5 Lacs. Commission defended this by saying “ Because there have been instances of pilferage in the newly-constructed toilets, an access-control system was initially tried but not found feasible in practice". Yet the fact remains that Rs. 5 Lac spent on this system has gone down the drain.

It is no wonder that J&K state chief minister Omar Abdullah has tweeted, "Must remember to ask to use the loo next time I visit the Planning Commission. Gotta see what all the fuss is about."

Many Indians have no doubt, started thinking that the time has now come to say good bye to planning commission along with its ivory tower officers, who do not seem to be doing any worth while work any way.
8th June 2012