Glowing in the dark- the Turmeric way 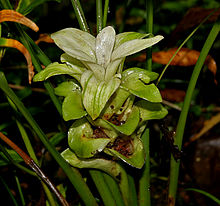 Much has been written about medicinal properties of Turmeric, a plant widely grown in western India. For Sunday editions of news papers, where, having a column about health specific topics is the 'in' thing, this subject is quite popular and articles about use of Turmeric for various medicinal purposes are seen frequently. Turmeric (Curcuma longa) is a rhizomatous herbaceous perennial plant of the ginger family, which grows to a height of 60 to 90 cm. It has a short stem and long leaves. Flowers of the turmeric are yellow white in colour. They are sterile and do not produce any viable seed. Plants are propagated from rhizomes, which are gathered annually as a crop. Part of rhizomes are used in the following season. Gathered rhizomes are boiled for several hours and then dried in hot ovens. After drying, they are ground into a deep orange-yellow powder, commonly used as a spice in curries in India. Turmeric also is used for dyeing, and to impart color to mustard condiments. Turmeric's active ingredient is curcumin and it has a distinct flavour which is earthy, slightly bitter, and slightly hot peppery flavour and a mustardy smell. 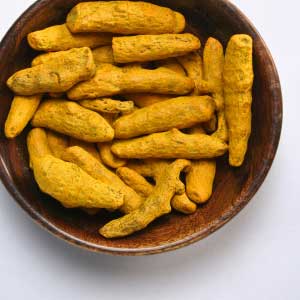 It is commonly known in India that Turmeric is a strong anti bacterial agent and adding a spoonful of it to any curry gives a fabulous taste to the dish. I am not writing this, to repeat all that stuff, which we already know. Turmeric gets all its special properties by the presence of a special chemical substance known as Curcumin in it. Curcumin can be used to test the alkalinity or acidity of foods. It turns yellow in an acidic food, and it turns red in an alkaline foods. Scientists are well aware of it's anti carcinogenic and Alzheimer's disease properties. Curcumin also works as a strong anti oxident substance.
Yet another property of Curcumin, has recently come to light. There is a very special property shown by many chemical substances. Such substances, if exposed to light for some interval of time and later kept in darkness, start emitting out a light of a particular colour or wavelength for some duration of time. Such substances can be clearly seen in total darkness, when they are kept there after exposure to light. A common example of such substances is the coating given to dials and hands of wristwatches, which can be clearly seen in darkness after exposure to light. These dials are sometimes known as Radium dials, which is a misnomer and have no relationship to radioactive element Radium. The property of emitting light after subjected to light is known as 'fluorescence' and all such substances are known as fluorescent substances.
If the lights emitted out by a fluorescent substances are analyzed by a spectrometer, different substances tend to show varying characteristics of emitted light. The duration for which light is emitted out after an exposure to light, varies with the substances. The wavelength or colour of emitted light changes with the substances. This analysis is known as 'fluorescence spectroscopy.' Surprisingly, some of the fluorescent substances display an even stranger property. If some organic or chemical substances are released in the room air, where such substances are kept, the intensity of light appears to change depending upon concentration of such organic or chemical substances released in the air.
It has been known that chemical substance Curcumin, which is present in Turmeric, is one such substance that displays fluorescent properties. However, a totally new characteristic of the fluorescence displayed by Curcumin has now come to light. A scientist doing research in University of Massachusetts, Lowell, Mr. Abhishek Kumar and his colleagues have found out that the intensity of light emitted by a molecule of Curcumin, fluctuates even with a very minute trace of explosive chemicals like TNT present in the air. Mr Abhishek Kumar feels that by using this property of Curcumin, it should be possible to create detectors that can find out existence of even a small quantity of explosives hidden anywhere.
If about 1 gram of TNT is stored at a place, surrounding air usually consists negligible number of 4 to 5 molecules of TNT for every 100 Million molecules of air. This makes the detection of TNT molecules extremely difficult. According to data published by US state department, something like 60 70 Million land mines have been laid underground by various countries worldwide. Many countries in the world have a large requirement of mine detectors to locate these underground mines. Mr. Abhishek Kumar feels that mine detectors based on Curcumin properties can do this mine detection job easily and cheaply.
Mr.Abhishek Kumar discovered this property of Curcumin, when he was experimenting to find out any possible process by which a Curcumin molecule could be dissolved in water for use in a medicines. However, to use the Curcumin molecule for explosive detection, it needs to be bonded with molecules of some other substances, which can catch TNT explosive molecules and hold them. If this happens then the attached Curcumin molecule can show explosive detecting characteristic. The main obstacle faced by Mr. Abhishek Kumar was that Cucumin dispalys its explosive detection property only when it is dissolved in a solvent like water. Curcumin forms stones in solid state and these stones do not show this property. To overcome this problem Mr. Kumar mixed Curcumin with polydimethylsiloxane polymer. This mixture was sprayed on a small piece of glass to form a thin film on the surface of the glass. Light emitting diodes (LED) were used as light source to project light on this thin walled glass piece. The light emitted by Circumin thin film, was detected by using suitable photo detectors. If any explosive molecules are present in the vicinity of the Curcumin thin film, the light emitted by Circumin thin film, starts fading in proportion with number of explosive molecules present in the vicinity. Mr. Kumar feels that if we could use LED light sources of different colours and suitable light detectors, it should be possible to detect presence of all types of explosive substances. At present Mr. Kumar's detector can detect explosive molecules even when there are only 80 TNT molecules for 100 Million air molecules. To use this detector for mine detection work, the sensitivity needs to be increased further.
Mr. Kumar presented these details in a paper read at American Physical Society meeting. This new property of turmeric opens many new possible areas, where it could used effectively.
23 June 2012
at 2:39 PM