Carrying your own food on travel 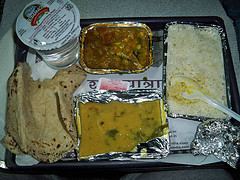 Kid's story books, which I read in my childhood, always described, how the mothers of the young men or princes from the stories, going on some travel to a far off country or to kill a demon, used to pack some dream food stuff for them, which would not only satisfy their hunger but also quench their thirst, while travelling. At that age, I was never worried, whether the queen ( the mother of the prince to go on a journey) cooked this dream foodstuff herself or ordered a cook to do this. But even at that age, I always had great curiosity regarding this dream eat, which would satisfy hunger and also quench the thirst. My mother or grandmother apparently never knew how this dish was prepared. Also no one I knew ever offered me this dish. This childhood wish of mine, to eat this dream foodstuff, was never fulfilled.
I found out all of a sudden, though much later, what this dream food stuff was really made off? I remember that I had traveled earlier to Bengaluru city for some official business work. For this journey, to Bengaluru City, I had managed to obtain valid railway reservations. I had thought then that I would be able to make some arrangements for my return journey, while in Bengaluru. I had finished my work in a very satisfactory manner. But I found out later that to get railway reservations for my return journey was an impossible task with no tickets available for any of the trains at all. Someone had then advised me to make inquiries near Kempagouda circle area, where there were offices of many private bus carriers and I might be able to make some arrangements there for my return travel by Bus. I found out that every night, at least 10 to 15 luxury buses ply between Bengaluru- Pune route. I immediately made reservations for my travel back to Pune with a bus company ,which looked O.K.
In the evening, I had some leisurely dinner and reached the place from where, these buses would start for the journey. The bus was ready and left Bengaluru after a slight delay. The bus only had seats and no berths for lying down, which meant that I would have to spend the entire night just sitting up. However I was a young man then and such kind of hardship at that age was not a big hurdle. We reached the town of Belgaum around 5 in the morning. After a cup of steaming hot tea, we left again and crossed Kolhapur town at about 9 A.M. A little distance away from Kolhapur town, the bus came to a halt very abruptly. I got down from the Bus and looked ahead on the road, I could see ahead of our bus, a very long line of of vehicles, standing still on the side of the road. 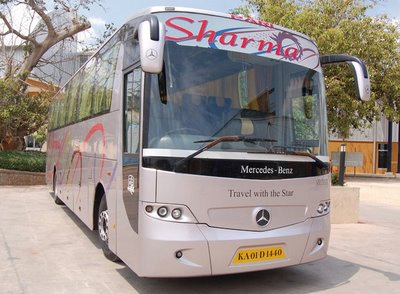 After making inquiries we found out that some peasant's organization had declared a strike on that day and had blocked all the roads. The strike was to continue till 5 o'clock in the evening. There was nothing to do except dozing in my seat in the bus or stroll around the area. That day I found out for first time, how slowly our clocks actually turn. After noon, I realized that I was extremely hungry, but as a young man I had never really bothered to carry any foodstuff or water with me. A co-passenger , who had ventured out, found that there was a small shanty or a shack selling some eatables. They were serving strong tea liquor with a dash of milk and plentiful of sugar and some fried snack, which to my horror, were fried green chillies. Since there was nothing else to get, I had bought a small quantity of fried chillies. The chillies grown in the Kolhapur region are known for their hotness. True to their pedigree, the fried chillies bought by me, were so hot that I found it almost impossible to eat them.
Finally I had to satisfy my hunger with outer crusts of the fried chillies and the blackish tea liquor. By 4 o'clock in the evening, almost everyone in the bus suffered with deep hunger and thirst. A lady sitting somewhere in one of the rear seats in the bus, perhaps sensed the plight and suffering of all the fellow passengers in the bus and distributed some snacks and sweetmeats she was carrying for her daughter staying in Pune. With fifty or sixty people travelling in that bus, each one of us must have received just a small portion of the snack and a small piece of the sweet cake. That little quantity of food, which I got from that lady, made me realize that any food that you get to eat, when there is a total scarcity of anything to eat, was the magical dream foodstuff of my childhood days, carried by the princes and heroes and which their mothers always packed for them. Since that day of hunger, I made a rule for myself to always carry some eatables and a bottle of water, whenever I had to on a jaunt.
Now a days I travel mostly by air. Many people feel that there is no real need for carrying food and water in an aircraft as everything is served by the air-hostesses. However, after experiencing that there is no basic difference between a bus journey and an air journey as far as hunger and thirst are concerned, I insist and carry food even for an air journey. Few years back, I took a highly regrettable decision to travel from Singapore to India by Indian Airlines aircraft. Our flight on that day was scheduled at 7.45 in the morning. Since it was expected that the airline would serve us breakfast in flight, I reached Singapore's Changi airport at 6 AM. After completing all the formalities like immigration and security check, I was waiting near the gate around 7 AM. Just across the gate, an old looking aircraft was standing on the tarmac, which was supposed to fly us to India. All of us waited at the gate anxiously awaiting the announcement for our flight. Clock turned to 8 o'clock, 9 o'clock and then 10 o'clock. Still there was no announcement of departure. At Changi airport, once you enter departure gate, neither it is possible to get any food or drink nor it is possible to visit toilet. Finally the flight was announced at 11 AM. Since the flight was scheduled for morning the catering service in the aircraft carried some stale bread and oily Samosa's served with lukewarm tea. By the time I reached Bengaluru airport in India it was already late evening by Singapore time. Most of the passengers were dying with hunger pangs as during last 10 or 12 hours they had nothing to eat except some stale bread slices, a Samosa and some lukewarm tea. Some travellers (that included me) were unconcerned and happy because this select band of travellers had carried with them the magical dream foodstuff of the kiddy days. 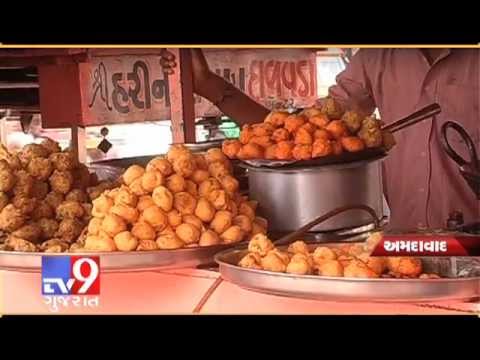 From India's different regions, people who originate from Gujarat in western India, are very particular about carrying food on travel. They would invariably carry with them, on any journey, whether of few hours or few days a huge tiffin box stuffed with regular food and snacks like Sev, Gathiya,Papdi and Khakara in sumptuous quantities. I have seen many travellers from Bohra community carrying Mutton Biryani along with them. This might be carrying things too far, but I feel that one must carry at least few packs of Biscuits, sandwiches and some sweet cakes along while travelling.
During foreign travels, when you have to pass through some transit airport, there are further complications. Once travelling from Chicago in US to Mumbai in India in 1991, I was forced to spend about 11 hours (from 10 o'clock in the morning to 9 PM) at the Heathrow airport in UK. Since I was travelling back from US, I had few Dollars left with me. In those days the tea was available at the airport for half a Pound ( About 30 or 35 Rupees). Since I had only Dollars, the tea vendor took 2 Dollars from me and returned balance change in British coins. Those coins are still with me as I never had an occasion to go to UK again and pay for anything in British coins. I had no problem about food though, since I still had enough quantity of food left with me, which I had carried to US in the first place. I ate some of that food and drank cold water freely available on the airport to spend the day.
Such is the importance of carrying food when you travel. You may forget everything else, never forget to carry food for any journey. You would not have to repent and you can always enjoy your journey.
at 3:00 PM