Why India prefers this little girl ? 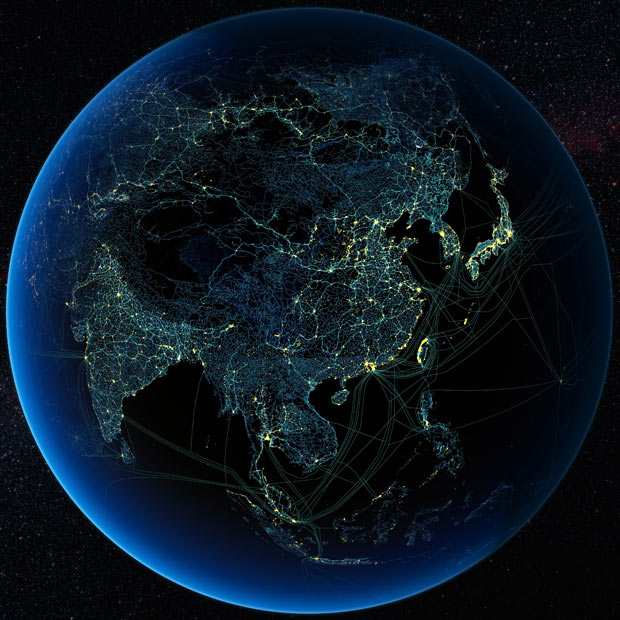 Two absolutely natural but cyclic phenomenon bring unfathomable miseries and hardship to people of Asia. They bring along with them, disasters starting from record floods to crippling droughts, wildfires and wild swings in weather patterns. Actually, these natural phenomenon take place somewhere far away, in eastern and central pacific, but the devastating effects cost Billions of Dollars to Asian Economies.
The Little boy or El Nino in Spanish, warms the surface temperatures in the eastern and central Pacific. This warming up of ocean can be first observed around December in Peruvian waters of South America. This phenomenon occurs cyclically, after every three to seven years. The phenomenon is quite insignificant but the after effects are quite devastating for the humans. Usually it leads to more rainfall in South America and substantial drop in the fish catch. El Nino has a dramatic effect on the trade winds across Pacific, blowing to the west. This results into triggering drought in Southeast Asia , Australia and parts of South Africa. It also reduces Monsoon rainfall in India, which impacts crops and livelihood of people. It generates cyclones in the central Pacific and stormy weather in southern and western US. The number of hurricanes in the Atlantic, however tend to go down In Australia, El-Nino can cause cut in wheat crop output, reduces water supplies by cutting river flows, shrink city reservoirs and dry out forests, which can trigger bush fires. As against this it increases rain in North America , improving crop prospects. Major El-Nino's have happened in 1982-83, 1997-98 and 2002-03. The severe El Nino in 1998 killed more than 2,000 people and caused billions of dollars in damage to crops, infrastructure and mines in Australia and other parts of Asia. 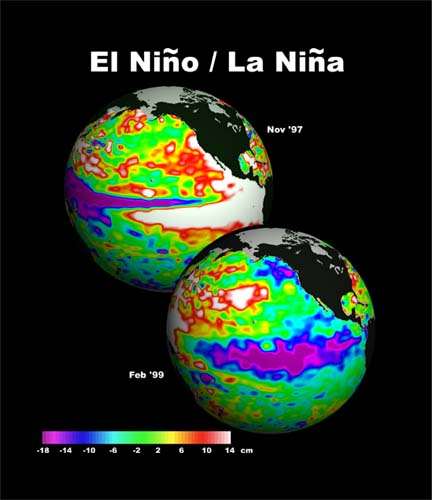 When little girl or La-Nina occurs, it produces exactly opposite effects. Here, the surface temperatures of the eastern and central Pacific ocean cool down substantially. This triggers stronger trade winds across the Pacific and around northern Australia, triggering above average rains and number of cyclones. In Indonesia and parts of Australia, La Nina can bring flooding rains. In Argentina and the US plains, La Nina can trigger drought. La Nina causes more hurricanes in Atlantic and fewer in Pacific. Major La Nina events occurred in 1973-76, 1988-89 and 2010-12. 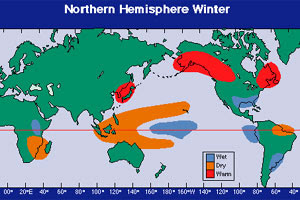 Even though this little boy and girl create global impacts, their effects on Asian economies are particularly severe. El Nino can create severe drought in India, resulting in a major downfall in crop production. It would also bring down soybean, palm oil, sugar and rice yields from Thailand, Malaysia and Indonesia. In Australia it brings down crops of wheat, barley and canola. In China, Corn production would be affected. But a strong El-Nino is beneficial to crops such as coffee and cocoa and keep their global prices in check. La Nina causes exactly opposite effect to El-Nino. The La-Nina effect of 2010-12 has brought bumper rains to India and a record production of food grains.
This little boy and girl are such dominant factors affecting various crop productions in Asia that the commodity markets can be completely spooked or floored, if punters sense La-Nina, whereas for the Governments and ordinary people, the effect is exactly opposite. They welcome La-Nina. The commodity markets may get extremely bullish, even at the whiff of El-Nino, whereas on Governments and ordinary people the effects are just opposite.
The Asian Monsoon or rainy season has just began with Thailand getting first rains in May. Indian meteorological department has predicted normal summer rains as there is no trace of El-Nino as yet. In India, a male child is still preferred by many over a girl or a female child. Yet with so much at stake on the timely arrivals of the Monsoon, I am sure that everyone in India would always prefer this Little girl La-Nina and may never want this little boy, El-Nino any time at all.
11 May 2012
at 3:14 PM