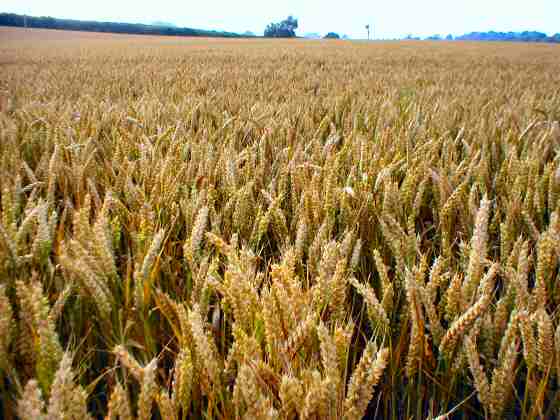 The Indian state of Punjab is facing a crisis. It's not that the state is facing shortage of essential commodities or electricity for that matter. On the contrary, the problem is exactly the opposite. Punjab is facing problems of plenty. For the second year in succession, the state is heading to a record breaking bumper wheat harvest. The total wheat harvest this year is likely to be around 12 Million tonnes, which surpasses all previous records. The previous best has been 11 Million tonnes, which means that the crop output would be higher by a Million tonnes. Acreage yield has gone up by 7% due to cool weather conditions and also timely winter rains. Incidence of pest attacks and crop diseases outbreaks also have been minimal. 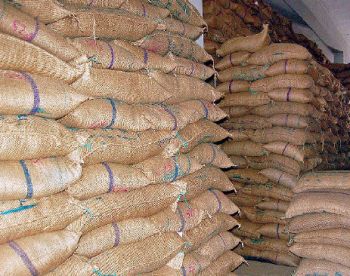 Though it's good news, it is giving head aches to the Government machinery as there are not enough storage places or even jute bags, which are required for packing the bumper crop. In India, traditionally, wheat is packed in Jute bags and then stored. Food Corporation of India (A Government owned company) says that out of its storage capacity of 20.4 Million tonnes, almost half is used by rice alone. With about 3.5 Million tonnes used to stock sugar, hardly 7 to 8 Million tonne capacity is available for wheat. Adding to storage woes, is the slow movement of wheat from Punjab, the stocks from previous years have gone up by 1.7 Million tonnes. Food corporation of India is unable to store all this stock in scientific manner and some of the stocks are kept in unscientific manner leading to damage. In last five years almost one hundred thousand tonnes of wheat has been declared as non-usable and has been sold to distilleries and cattle feed producers at a great loss, which is estimated to be around 1.25 Billions of Rupees. 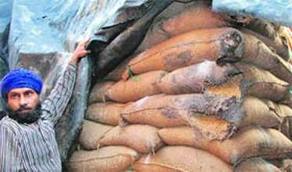 Worst part of this story of plenty is that Punjab state is not alone in this. Neighbouring states of Haryana and Madhya Pradesh are also in though to lesser degree. Haryana had an opening stock of 5.5 Million tons and have already procured another 7 Million tonnes this year. Madhya pradesh state used to produce about 4 Million tonnes each year. Last year the output was 5.2 Million tonnes and this year it would exceed 8 Million tonnes. Both these state have poor storage facilities and much grain is wasted due to rotting. 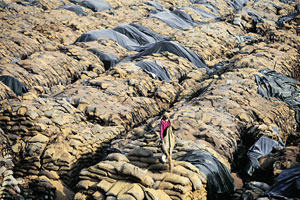 The minimum support price paid to wheat growers as announced by the Government this year is 12850 Rupees per tonne. Whereas wheat is being sold in wholesale markets in range of 10,000 to 13,000 Rupees per tonne. Due to this reason, no private traders are ready to procure stocks from the growers. Almost entire harvests in last few years therefore have been procured by the five state agencies and the Food Corporation of India. Who are now facing storage problems on an unprecedented scale.
It becomes obvious that a very comfortable wheat supply situation is being given up due to inadequate storage capacity. Wheat exports were banned since last four years and about 2 Million tonnes of wheat was allowed to exported in July 2011. Food corporation of India is trying to lease storage space from private godowns, but the efforts are proving to be inadequate. It is clear that if India has to maintain this position of comfort, large scale construction of storage godowns or grain silos is required. States are now hoping that federal Government would now step in and take the responsibility of storage. Federal Government can not really step in unless Food security act is passed by parliament. This act only would allow the federal Government to step in and create grain storage facilities.
Indian consumers are facing raging inflation in almost all food items. Wheat is an exception, thanks to the Wheat growers of Punjab, Haryana and Madhya Pradesh. Whether this position of comfort would be maintained or frittered away due to inadequate storage is a Million Dollar question. Favourable weather for last couple of years has helped in producing a bumper crop. Such favourable weather may not continue forever and in near future, wheat production may take a hit. If wheat godowns are full and flowing, we may not face any shortages. Passing of Food security act and creating storage space therefore becomes a top priority area.
Problems of plenty are equally troublesome as woes created by shortages. Isn’t it?
15 May 2012
at 2:28 PM