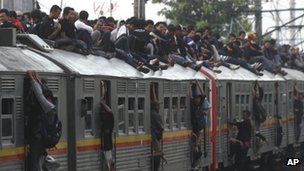 Few years ago, a film song from a Bollywood film had become a super hit. This song " chaiyyaa chaiyyaa" was picturized in a train. Parts of the song were shot in an open goods carriage and few shots were taken on the carriage rooftop. The song became a super hit perhaps because rooftop travel is not something, which is very alien or strange for Indian audiences. In states like Bihar and Rajsthan, where train services are few, compared to number of travellers including all those who are either willing to pay for their travel or just want to have a free ride, rooftop travelling is fairly common. Even in Maharashtra, commuters travelling on a railway line known as "Barshi Light railway" from Latur or Barshi to Pandharpur, used to travel on the carriage rooftops. This train, anyway moved so slowly, that the journey on the rooftop, dangerous to certain extent, was entirely feasible.
In Indonesia, the railway network built by the Dutch before independence, is similarly proving to be totally inadequate for the number of commuters. The old railway tracks are not being serviced well and can not carry large number of train services. In the Indonesian capital Jakarta, at least 4,00,000 commuters travel each day in and out of the capital. The number of train services here are not adequate and run mostly late. Because of this, the trains are so crowded that even commuters with valid tickets also are forced to travel on carriage rooftops. The railway fare here can not be said to be very high. Even then, many poor people can not afford it. Such ticket less commuters naturally prefer to travels on rooftops only.
From the number of casualties and fatalities, it becomes immediately clear, how dangerous roof travel is? In Indonesia, 11 commuters had died in 2008. In 2011 this number increased to 58. Most of the deaths have occurred because the person came into contact with the open power line supplying the electrical power for train traction. Some deaths have also occurred due to people slipping of the rooftops. Railway safety officers in Indonesia have been taking different measures and trying their best to prevent such rooftop travel without much success. To start with, rooftops were coated with sticky paints or oil. When it was found that these measures do not work, popular artists were contracted to sing railway safety songs to make an impact on the minds of the commuters. Even this did not work. Ultimately barbed steel wires were stretched on the rooftops, which were also not any useful. As per Indonesian law, for such rooftop travel , a jail term is prescribed. This also has not deterred the commuters. The problem has now become so serious that the railway safety officers have been forced to adopt a final solution. 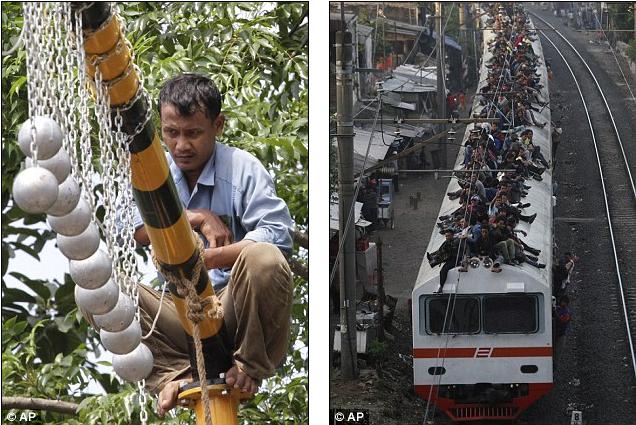 Concrete balls are now being hung with a chain. These balls are so positioned that they are only few inches from the rooftop and are suspended from steel structures erected on the ground. First such structure has come up at a station near Indonesia's capital city, Jakarta. If the experiment proves successful, it is planned to erect such concrete ball structures near all important stations and crossings. 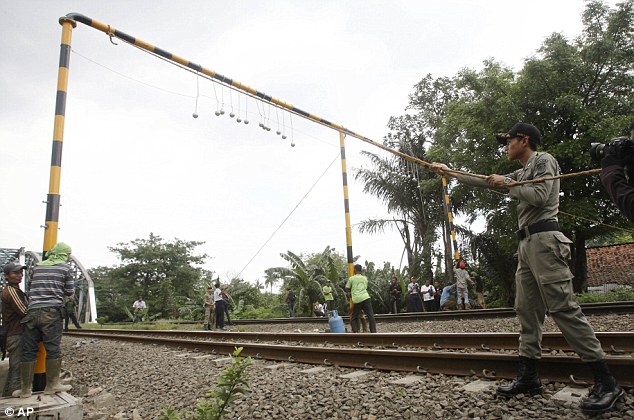 Many commuters are displeased with the decision of the safety officers to erect these concrete ball structures. They still hope that this experiment would be a failure and would not be continued so they can continue to travel in their old way on the rooftops.
at 2:09 PM